The Secret History of Everything

Perrotin is pleased to present the group exhibition The Secret History of Everything, featuring paintings by KatherineBernhardt, Mauro Bonacina, Sayre Gomez and Julia Wachtel, as well as sculptures by Daniel Arsham, Cosima vonBonin and Nick Doyle. Comprised of historical works, as well as new works, this exhibition explores the impulse tounderstand visual culture as a collective narrative and challenges notions of individuality and authorship.

The exhibition’s title is a nod to Adam Curtis’s pivotal 2016 documentary HyperNormalisation, which proposes a newcultural narrative and societal portrait through assembling three decades of BBC’s broadcasting archives. The SecretHistory of Everything presents work by seven artists who are to varying degrees meticulous observers. Together, thework on view reckons with the sprawl of mass media’s infinite image bank, the obfuscation of source material, and theunceasing advance of a slick advertorial aesthetic. The artists in the exhibition — as semioticians, record keepers, andprovocateurs — offer us truthful stories in a post-truth world.

Julia Wachtel, a counterpart to the Pictures Generation and a pioneer of appropriation art, has utilized silk-screen as amethod to examine mass media and the proliferation of the digital image throughout the last five decades. First emergingin the early 1980s, the golden age of advertising, Wachtel’s work draws from image sources such as greeting cards,commercial posters, infomercials, daytime talk shows, tabloid magazines, and clip art illustrations. Her compositionsare intercut with hand-painted panels, thus destabilizing the authenticity of the image and disrupting our mediatedcultural ecosystem. Early works, such as Encore (1988), explore the emotional impact of our cultural addiction to thecult of personality, while her later works, such as SuperMushroom (2020) with its abandoned supermarket isle, reckonwith the destructive nature of mass consumerism and the media’s false promise of blissful abundance.

Italian artist Mauro Bonacina also works with an inexhaustible image bank, utilizing digital ephemera as source material in dense, eerily familiar compositions, alluding to consumerism within failed utopias in modern history. The artist combines and transforms images through the use of digital software, and prints the final iteration onto canvas, then applying paint to blur the lines between painting and print, abstraction and figuration. In his latest series, the artist has paired images of branded puffer jackets with abundant still lifes, sourced from American and Dutch painters of the eighteenth and nineteenth century to everyday modern objects such as phone accessories. Each elongated painting expands and contracts digital images into a tight picture plane, mirroring the geometry of an iPhone screen.

Los Angeles-based artist Sayre Gomez investigates image culture, particularly through the legacy of landscape painting. The artist utilizes hyperreal painting techniques borrowed from Hollywood’s industry of backdrop painting and prop-making. Through Gomez’s piercing rendering, a slightly out of focus image of an empty lot populated by nothing more than a large tree and a campers tent is immediately interrupted by a fence. In Coming Soon: Luxury Condominiums! Starting in the Low 800’s (2020), Gomez challenges the viewer’s perspective, and incites concurrent feelings of both familiarity and distance, attainability and futility. Also on view is Untitled (2020), a painting that the artist created in response to the ongoing efforts for racial equality. The artwork depicts a Black Lives Matter sticker placed on a scratched metal surface, highlighting his signature trompe l’oeil technique. All profits from this painting will be donated to Black Lives Matter Los Angeles.

Artist Nick Doyle is keenly aware of the legacy of the American notion of Manifest Destiny. Known best for sculptural wall works made from collaged denim, Doyle infiltrates the vocabulary of Americana to examine greed, excess, and toxic masculinity. On view is Wherever I look all I see is the past (2020), a new work depicting an oversized pair of binoculars as a metaphor for the narrow lens through which we view our own status quo historical narratives. Seemingly innocuous, Doyle’s imagery — vending machine, typewriter, cigarette pack — and materials — indigo and cotton — tell a story of American colonialism and consumerism, as well as explore the influence of media on global trade systems. By employing materials that hold cultural significance, the artist both reflects on and critiques social and political agendas
that are often at play in contemporary life and visual culture.

Similarly, Cologne-based artist Cosima von Bonin is a sharp-tongued symbolist. Exhibited is a key work from the sculptor’s deep-sea series, previously exhibited at SculptureCenter. TOTAL PRODUCE (MORALITY) is composed of a stuffed octopus recumbent on a floating pedestal. Underneath, the pedestal emits an ominous, eerie glow. Although these plush creatures appear as children’s toys, they are far from it. In fact, Jason Farago summarizes that “their ironic anthropomorphism is very adult: There’s nothing cuddly about them, and many look exhausted by modern, that is, human — life.” The fabric collage of floral patterns and Japanese flags bear very little resemblance to the real animal but reverberates challenging recurring motifs of appropriation and environment.

Katherine Bernhardt has contributed a new suite of large-scale paintings, vibrating at a high frequency. The work on view is in her signature style: expanses of messy fluorescent brushstroke intercut with flattened objects-as-emojis, pulsating with sure-footed movement. Like Wachtel and Bonacina, the images and quotidian items chosen by Bernhardt are removed from their original context: storm troopers, Nike swooshes, and Coke bottles, as well as E.T. and Garfield, both beloved American childhood characters. Here, discordant objects are chained to the same canvas, forced into never-ending conversation with one another.

Finally, New York-based sculptor Daniel Arsham debuts a new sculpture for the exhibition, continuing his exploration into the timelessness of certain symbols and gestures through the haunted yet playful appropriation of cultural objects. The work on view, titled Quartz Eroded Eroded E.T. Video (2020), is comprised of a crystallized VHS tape from Blockbuster, a ubiquitous and now shuttered chain of American video rental stores. A modern artifact, recreated through hydrostone and selenite, Arsham meditates on the nature of pictures, as well as their tendency to be continually absorbed and reabsorbed. 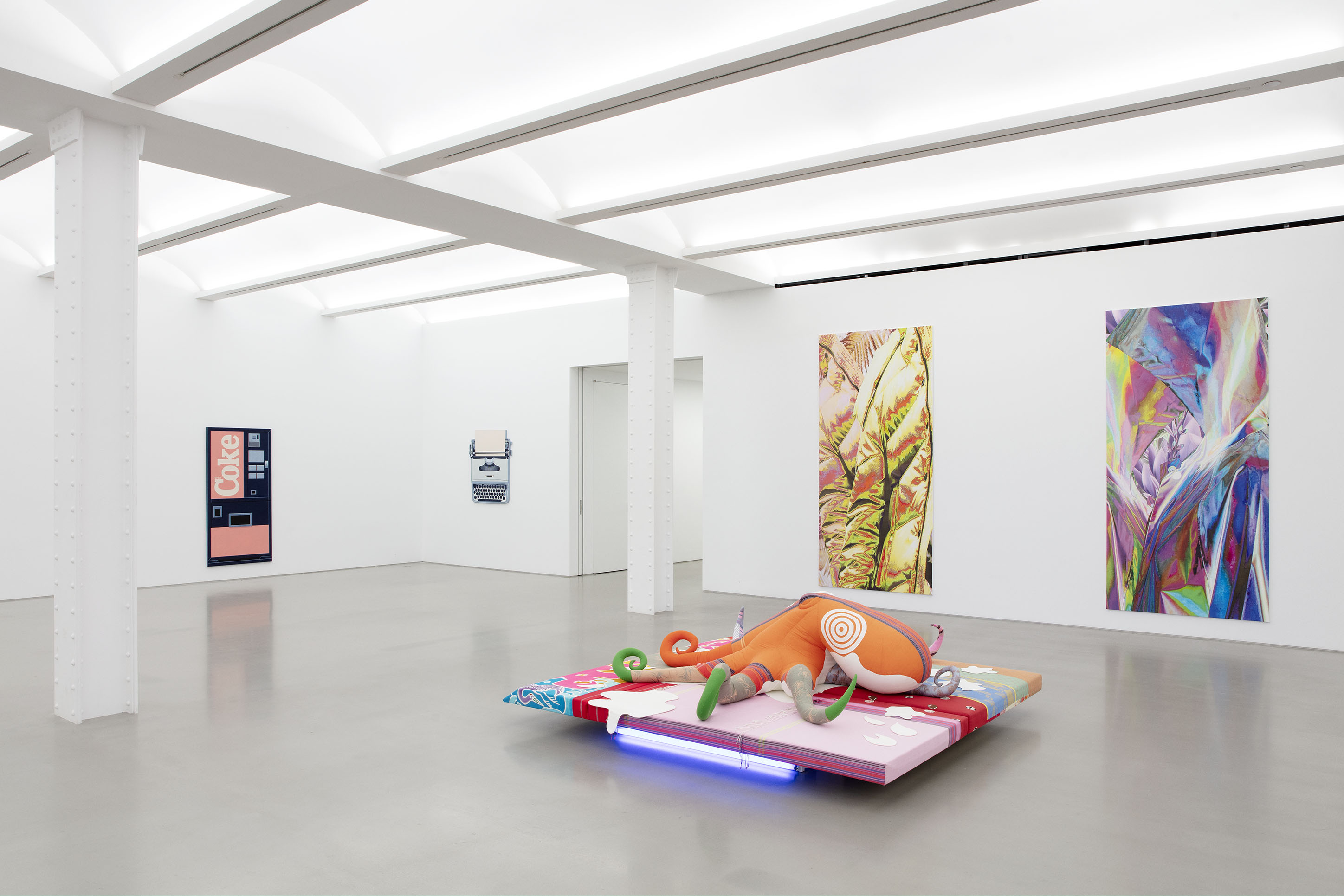 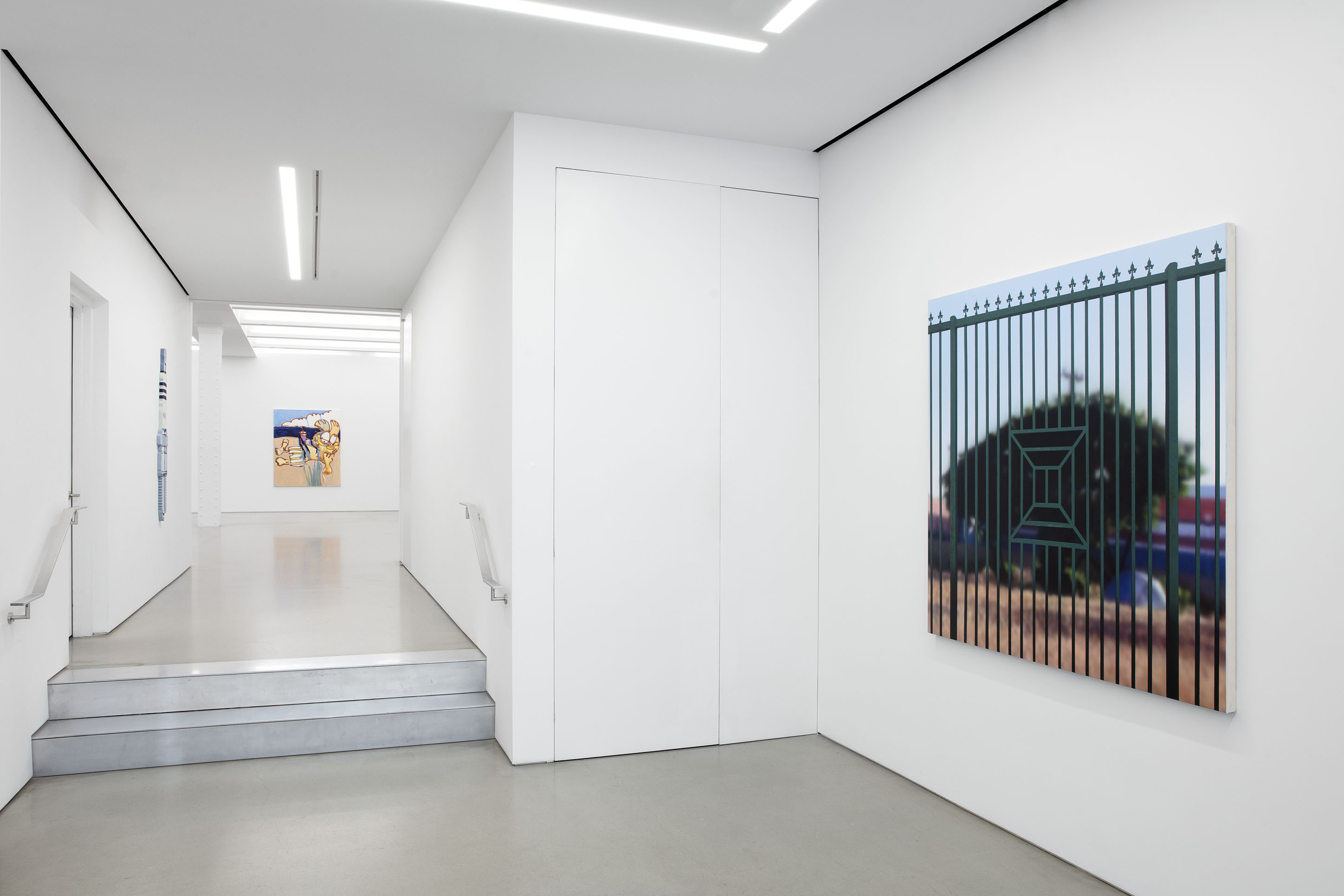 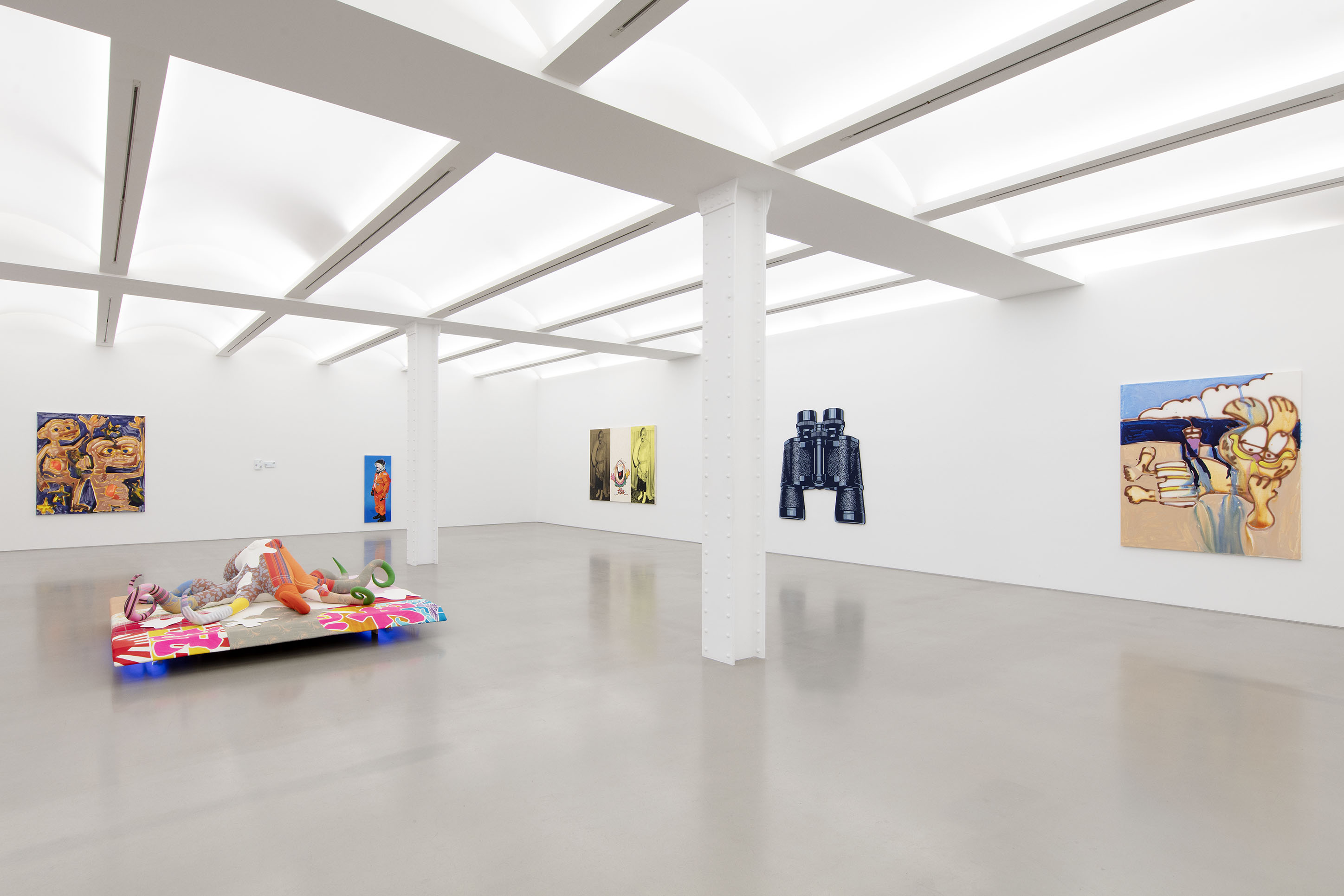 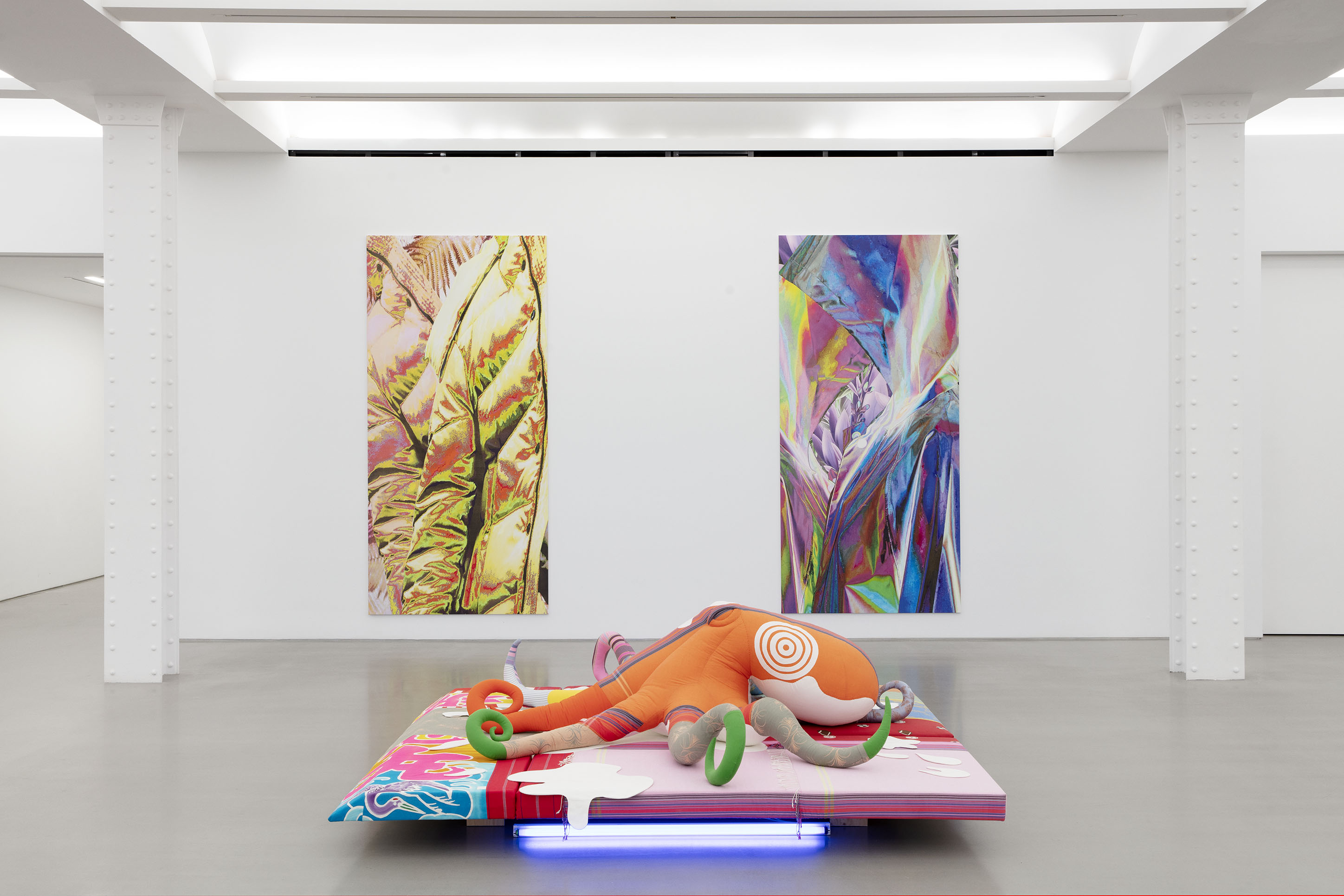 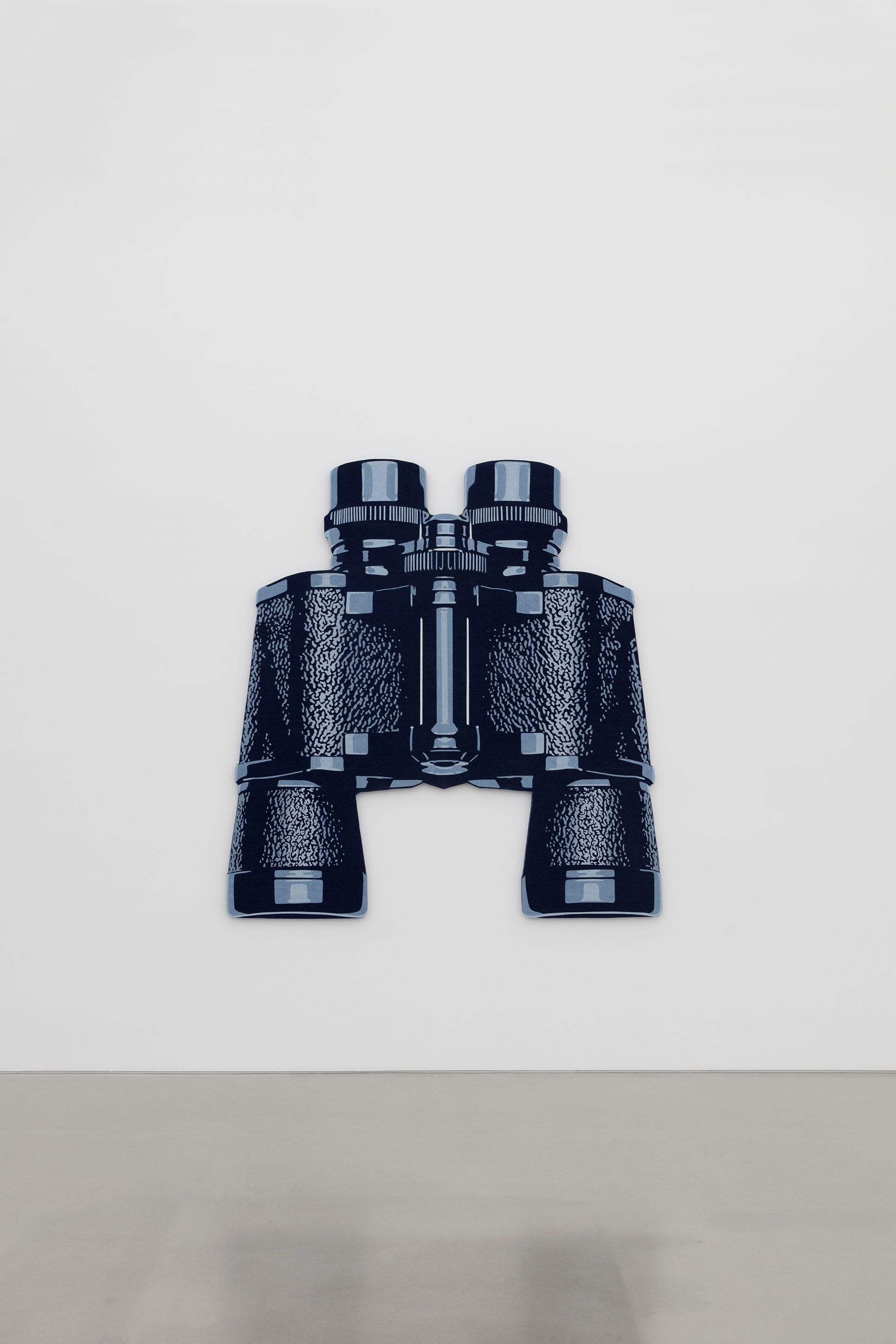 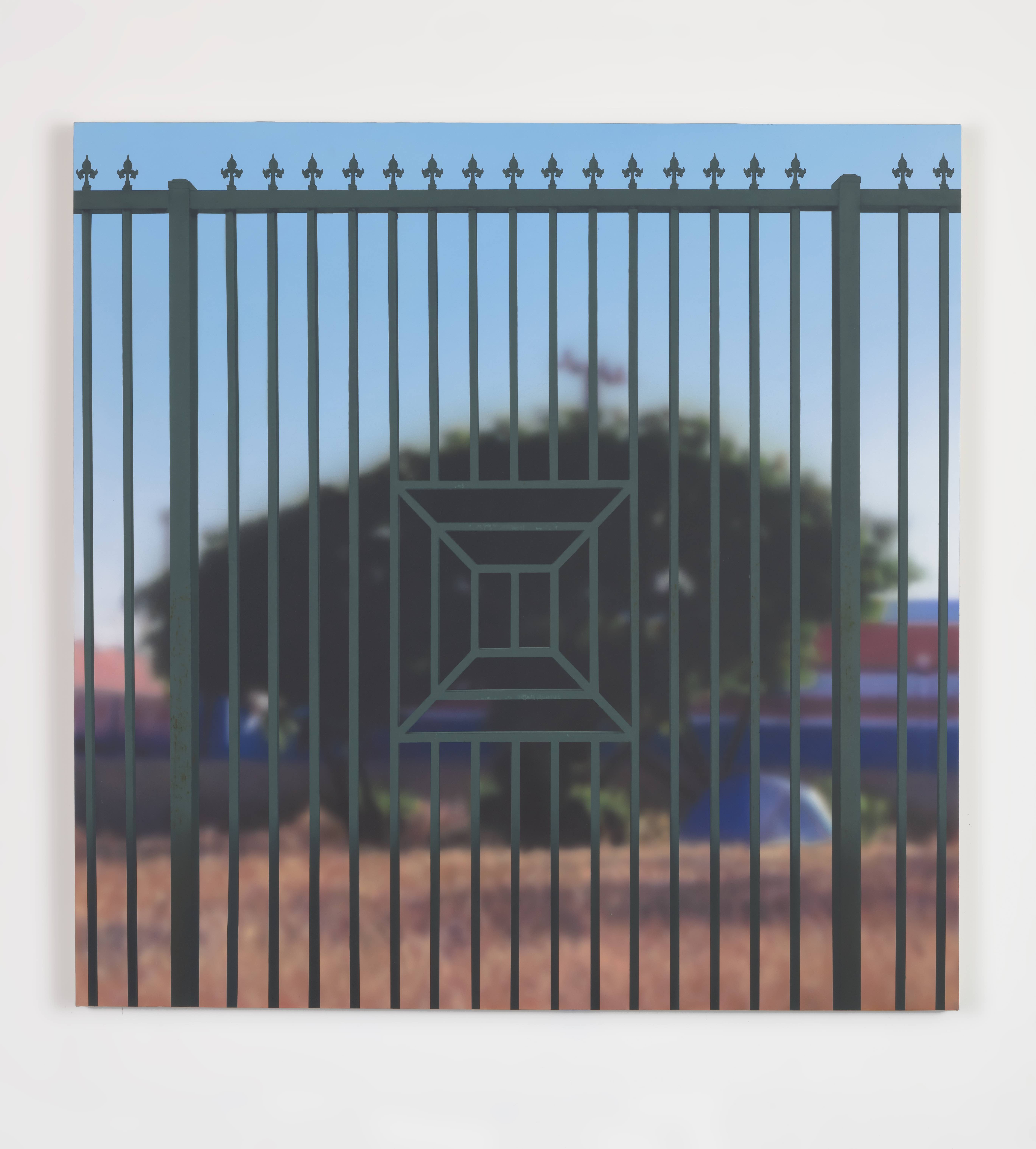 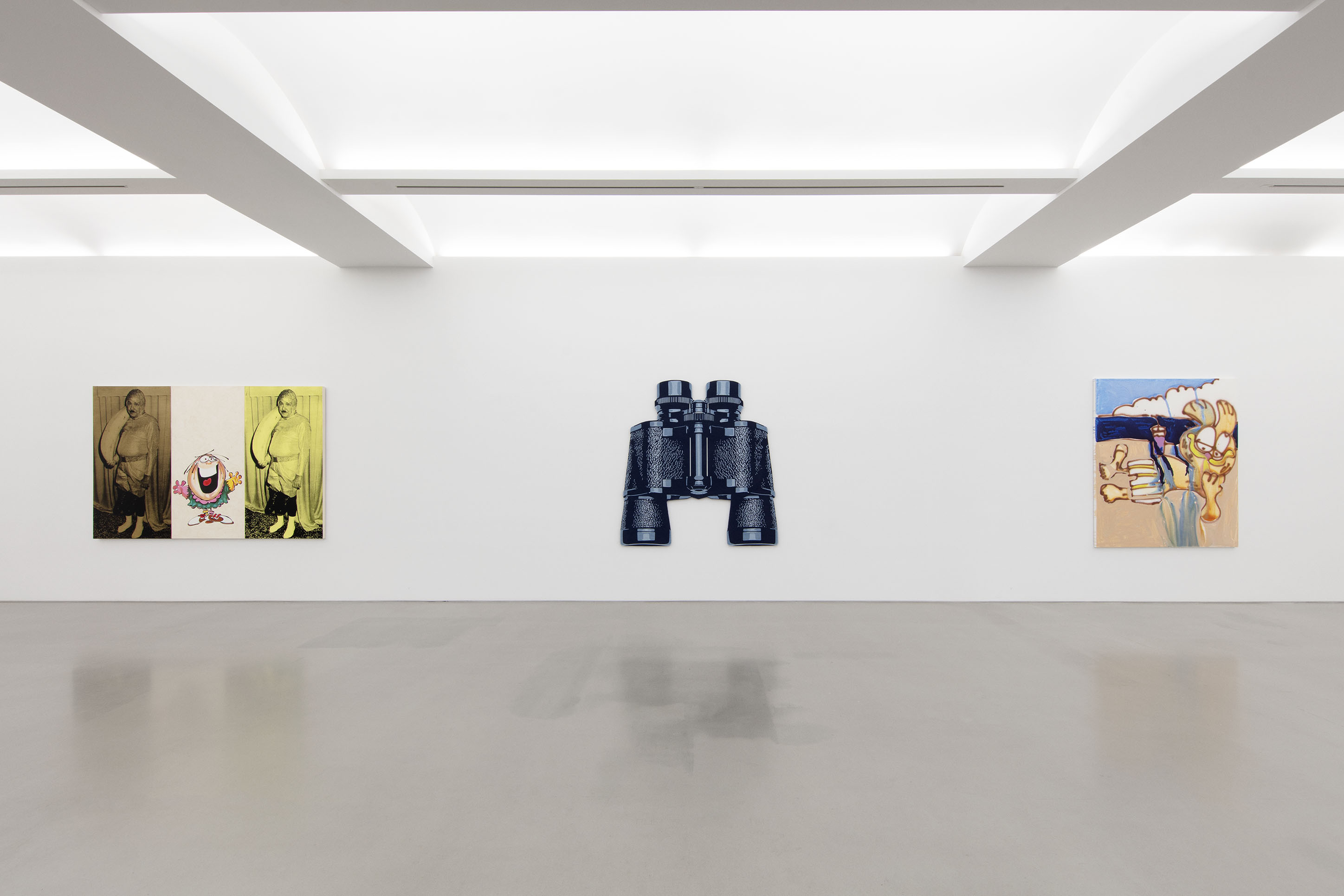 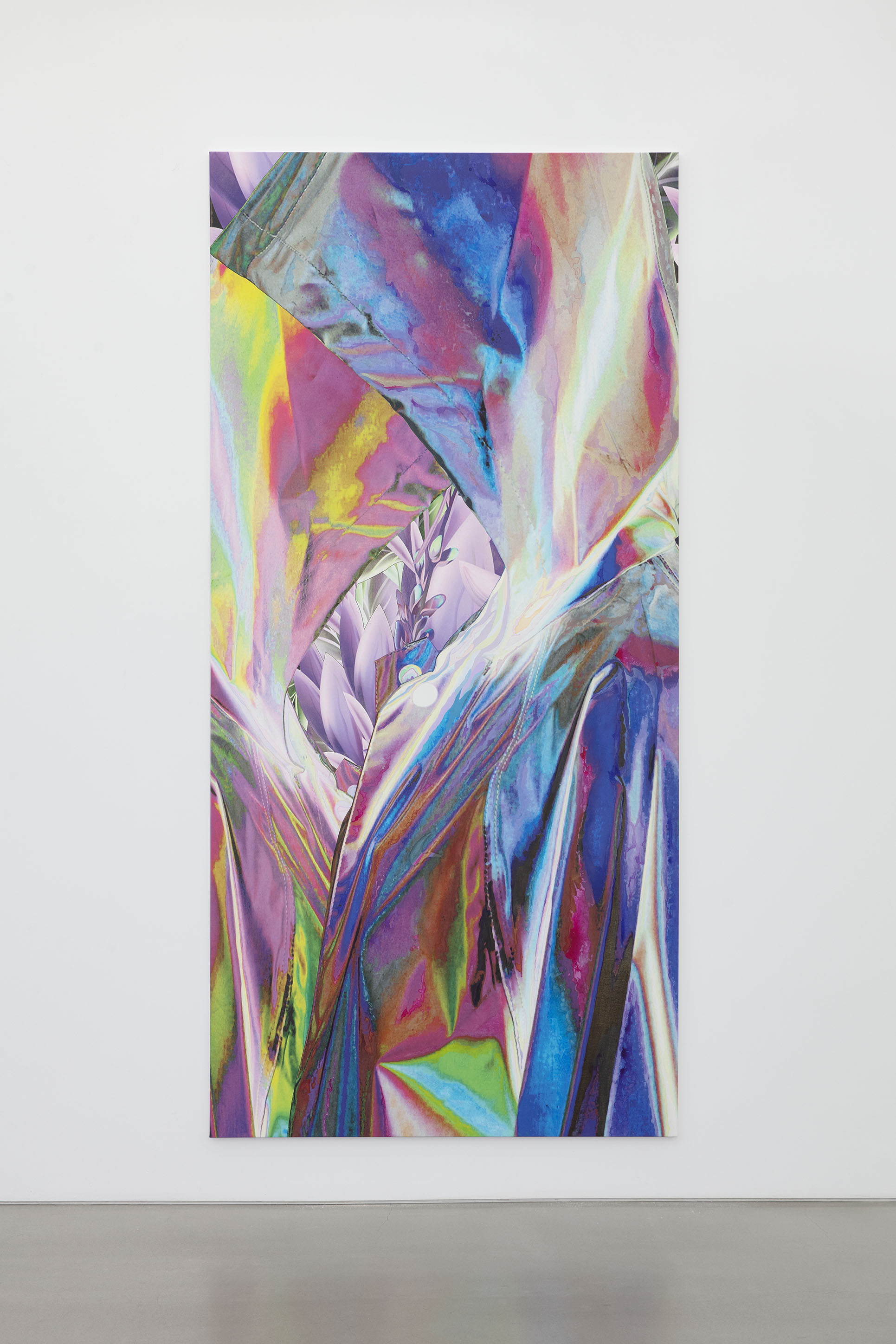