It’s rare that artists have the courage to put aside their personal stardom and, already for the past 20 years, continue to build up an oeuvre as a trio. In the art world one usually acts under a personal name that constitutes both the signature and the value of a market system in which “branding” remains the core of immaterial transactions through (material) objects. This was displayed, in a painful way, by the oeuvre of Marcel Broodthaers. In countless works his initials “M.B.” were presented as accumulations, referring to economic speculation and acceleration of goods. The signature becomes a (legal) seal for art, its importance linked to the name and fame of the artist who signed the work and who, in doing so, positions the artwork in the economic sphere, as a ‘conquest’.

Leo Gabin is a fictitious collective consisting of three artists who, from a common background in printmaking, profiled themselves as a group and an artistic practice that escapes an individual artist’s signature. Their studio is like a container/depot - a cozy messy space for reflection and practice where all kinds of imagery is stored as a heap of untapped potential, waiting to be artistically ‘activated’ at the ‘appropriate’ moment. Leo Gabin’s interest is in the abject that leaves deep traces in their preoccupation of transforming banal images from mass media, b-movies and publicity, into an image status where it can be described as art and can start leading a life in the institutional activity of the art system.

‘No Panic Baby’ (2017) is a short, intensely nervous film that is being shown to an anonymous audience of passers-by in front of the modernist view box TICK TACK, a new destination for contemporary art. Consciously or unconsciously, the spectator has to position him- or herself in between a busy traffic lane and a city park in order to see, or rather experience, this remarkable film which has never been shown in Belgium before. It’s an experimental film that, in terms of today’s form and taste, goes completely against the majority of neat and expensive video works produced in a stainless artist studio as a (commercially useful) limited edition. Making such a film is a merit that, without being nostalgic, can refer to a kind of underground cinema such as that of the Lithuanian avant-garde ‘poet’ Jonas Mekas (1922-2019) who gained worldwide fame with his turbulent ‘Films -maker’s Cinémathèque’. Shooting freehand, Jonas Mekas filmed reality as he saw and experienced it from his arrival in New York after the Second World War until his death. Coincidentally, New York was a city that embraced the avant-garde but also a metropolis that soon fell prey to real estate, the art market and mass tourism. This long- running recording evolution filmed firsthand by Jonas Mekas was captured from all possible and impossible points of view, parallel with the rapidly changing zeitgeist and his personal tumultuous life course.

The principle of editing low- and b-art images in one flux of visual fragments without the desire to tell a coherent story is explicitly palpable in “No Panic Baby”. The film whispers, insinuates and suddenly accelerates in a threatening atmosphere of crime. There’s a back-and-forth seduction into meandering settings of “worn out” and decrepit places such as dingy motels, amusement arcades, desolate gas stations, and dull metropolitan suburbs. Everything is ‘unreal’; basketball is played automatically at a carnival attraction and fresh cut flowers, like soft drinks and snacks, can be purchased from an attractively lit vending machine. Staged alienation is being beautifully portrayed through the solitary embedded consumption in which one is no longer served personally but where everything rolls out of a machine or with a dull dip into the eager hands of the consumer.

The film is a suite of nervously passing sets that closely resemble, to put it politely, the work of David Lynch and, closer to home, the cinematic practice of Nicolas Provost. And yet what sets Leo Gabin apart essentially is their way of scaling up the film with fragments from the intimate, closed-off homely environment of young girls who sometimes literally camouflage their faces with black painted masks. A game of attraction and repulsion is being played. The latent atmosphere of desperation, ‘being watched’, the desire to be loved and the mental search for the thin line between real and fake make this film reside, as it were, in a state between waking and dream. This state is noticeable for example in manipulations where only the white of a woman’s eyes is visible as a kind of rolling ‘fade away’ from reality. “No Panic Baby” can be described as a succession of erosions. In a number of scenes the burning of personal items on a heap of gray sand hints to everything in life that slips like sand through our fingers, making room for change.

The car scenes are masterfully presented as evocative places of danger, dreams, murder and deadly boredom. The blue skies turn brown-grey when a fierce fire is raging and show bizarre, questionably realistic airplanes with (sometimes) roaring engines, or helicopters circling like vultures around an undefined prey. “No Panic Baby” is a film that reads like a pulp novel in which clichés conceal ideas that reveal the core of a hypothermic, solitary existence.

Leo Gabin recently produced a series of chair sculptures and a number of monumental screen-printed canvases. The chairs are non-functional and show a delicately crafted quality with found materials and images that often evoke an architectural character. They are assemblages of elements of old and broken chairs with nostalgic colors and textiles that, through an artistic twist, lead a new a-functional life. They are objects that are reminiscent of chairs, all the more so because they can be flexibly manipulated in the space. They are art objects: sculptures without a plinth that offer a platform for other images and, in doing so, perfectly exchange their physical usability for a mental one. The images spring from the broad ‘sleeping’ depot of Leo Gabin; soft erotic images or advertisements for some tasty candy bar. Because of the playful-ironic de-formations, the chair sculptures can refer in many ways to the recent history of sculpture. This is being encouraged by Leo Gabin for example by mounting a small dirty-white pedestal on the chair object and by keeping the other absurd montages visual and ‘unfinished’.

Once again, this involves an abject aesthetic that has become a rarity these days. These works are situated on a winding path between the oeuvres of Franz West, Reinhard Mucha, Fischli & Weiss, Mike Kelley and Thomas Hirschhorn, without insinuating that they are substantively indebted to these artists. Without a table, chairs have no fixed place, therefore these chair sculptures also insinuate a nomadic nowhereness that escape any intention of an ideal setting or display. It’s the kind of art that finds a place everywhere and derives its legitimacy from the art context in which the chairs are positioned. Chairs are awaiting a dance.

The monumental canvases swallow a person whole. The scenes seamlessly emerge from a signature Leo Gabin visual language that leans towards the social sub-margins and ditto culture. Besides the naturally occurring dirty smears and spots on the canvas, the inked images evoke an atmosphere that throws all the cheerful qualities of a painting overboard. The monumental canvases are multi-pictorial sets that overpower the act of looking in an atmosphere that focuses on the fragmentary images in a desolate surrounding canvas context and position. In these works there is no substantive anchor to be found, with the exception that all images have been looted and as a whole do not make up any story that could begin to lift the veil. In a number of works the pixels drip off the canvas, like grains navigating the eye to images that refer to photography but have no language. A small canvas of a young woman dancing wildly in a private room describes the search for motifs in which figuration seamlessly connects with a casual form of bad printing.

Leo Gabin does not speak, Leo Gabin shows and the viewer reacts as he or she pleases. Leo Gabin makes art as a catalyst for nothing more and nothing less than ‘something’ that wiggles and dances, whether or not wildly or willingly, on the imposed and unseen algorithmically manipulated rhythm of consuming life. 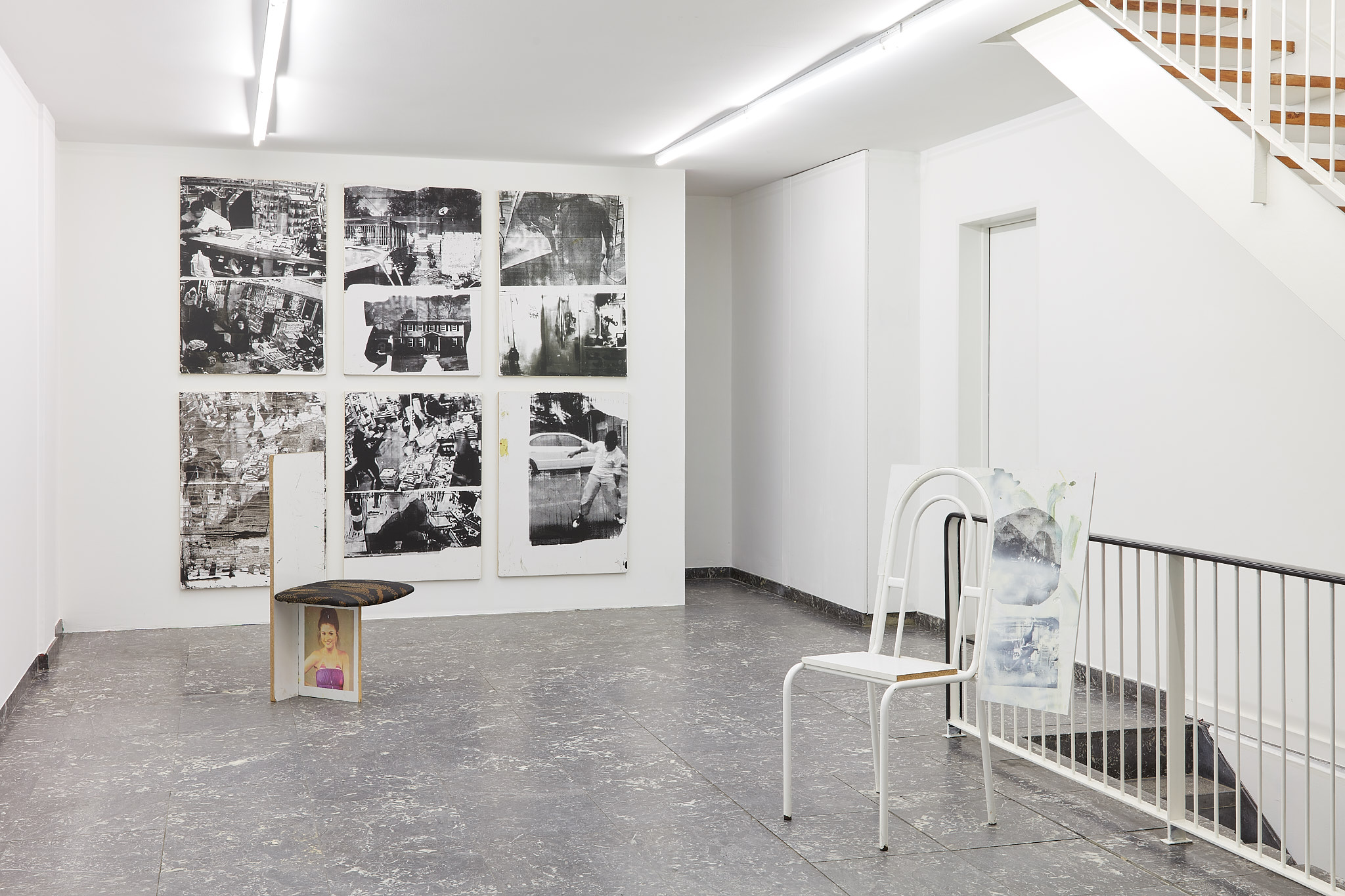 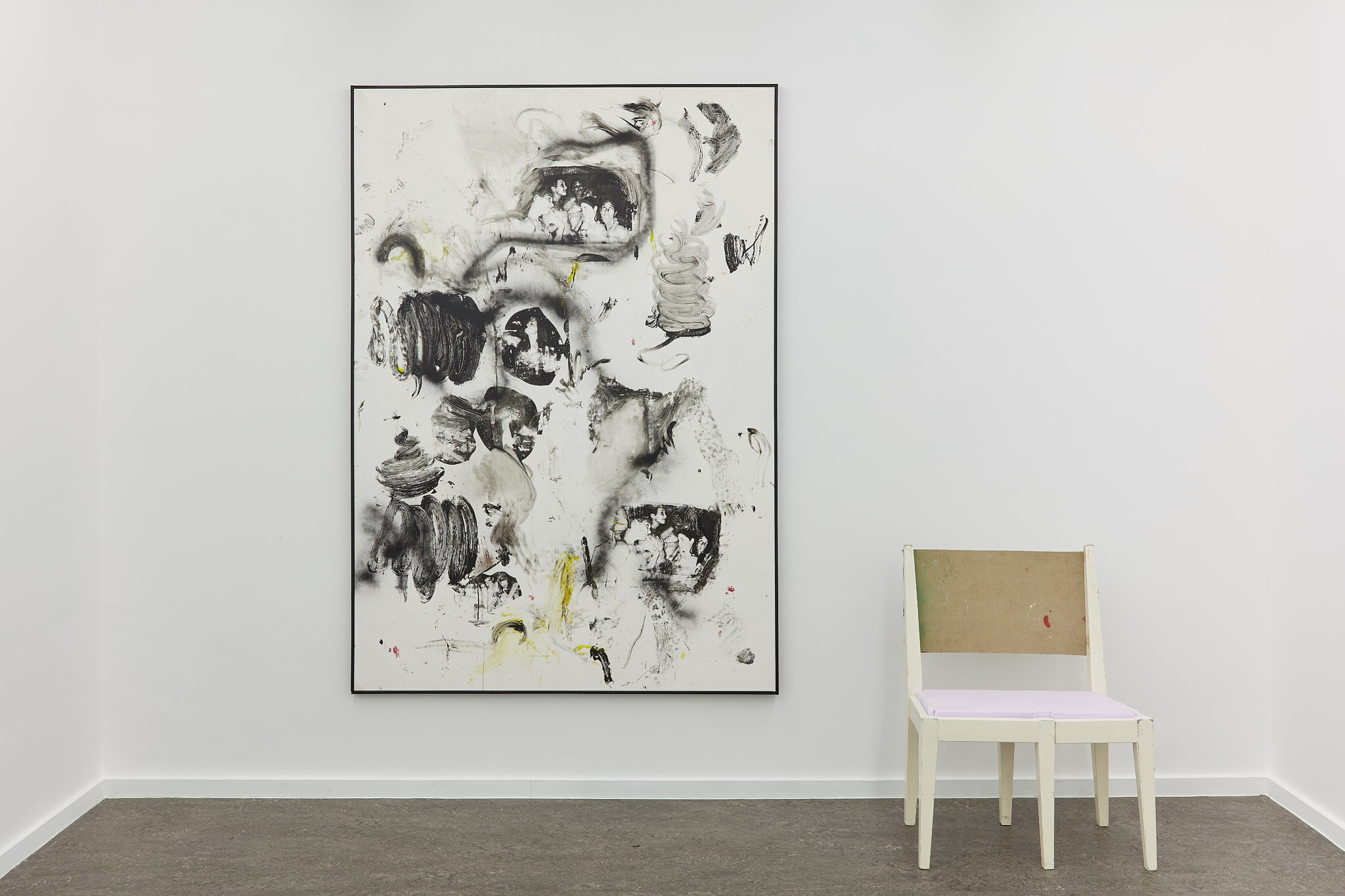 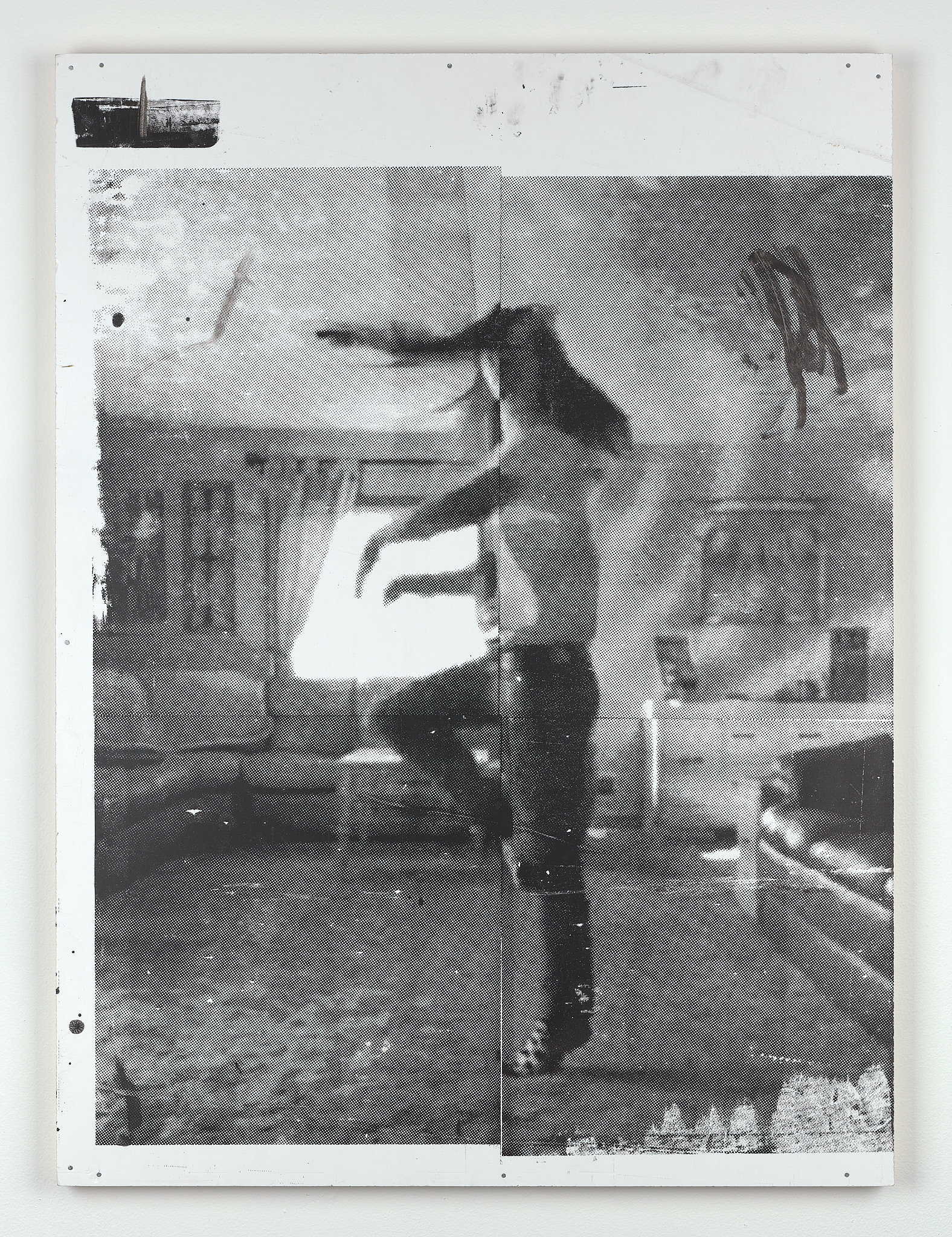 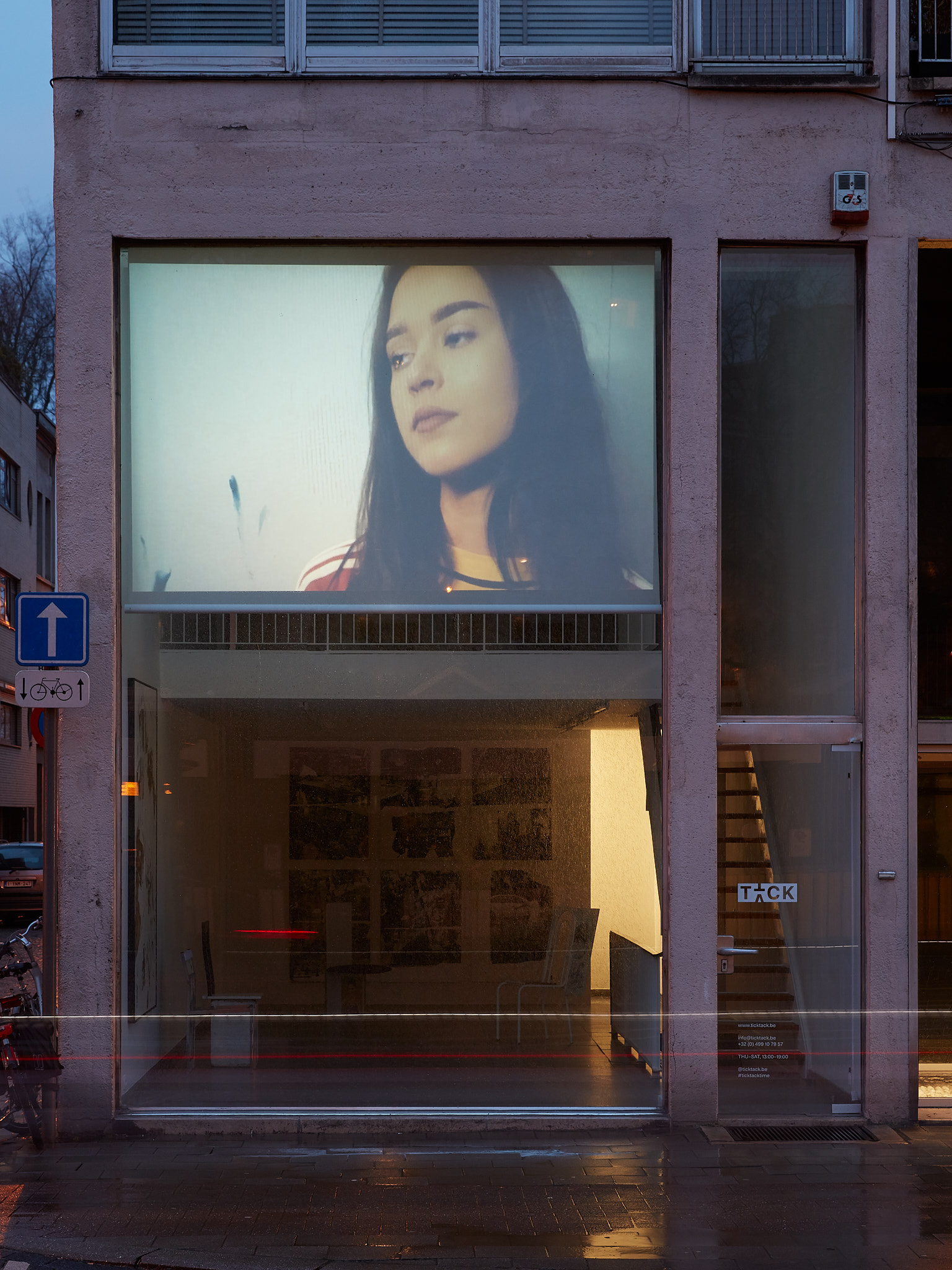 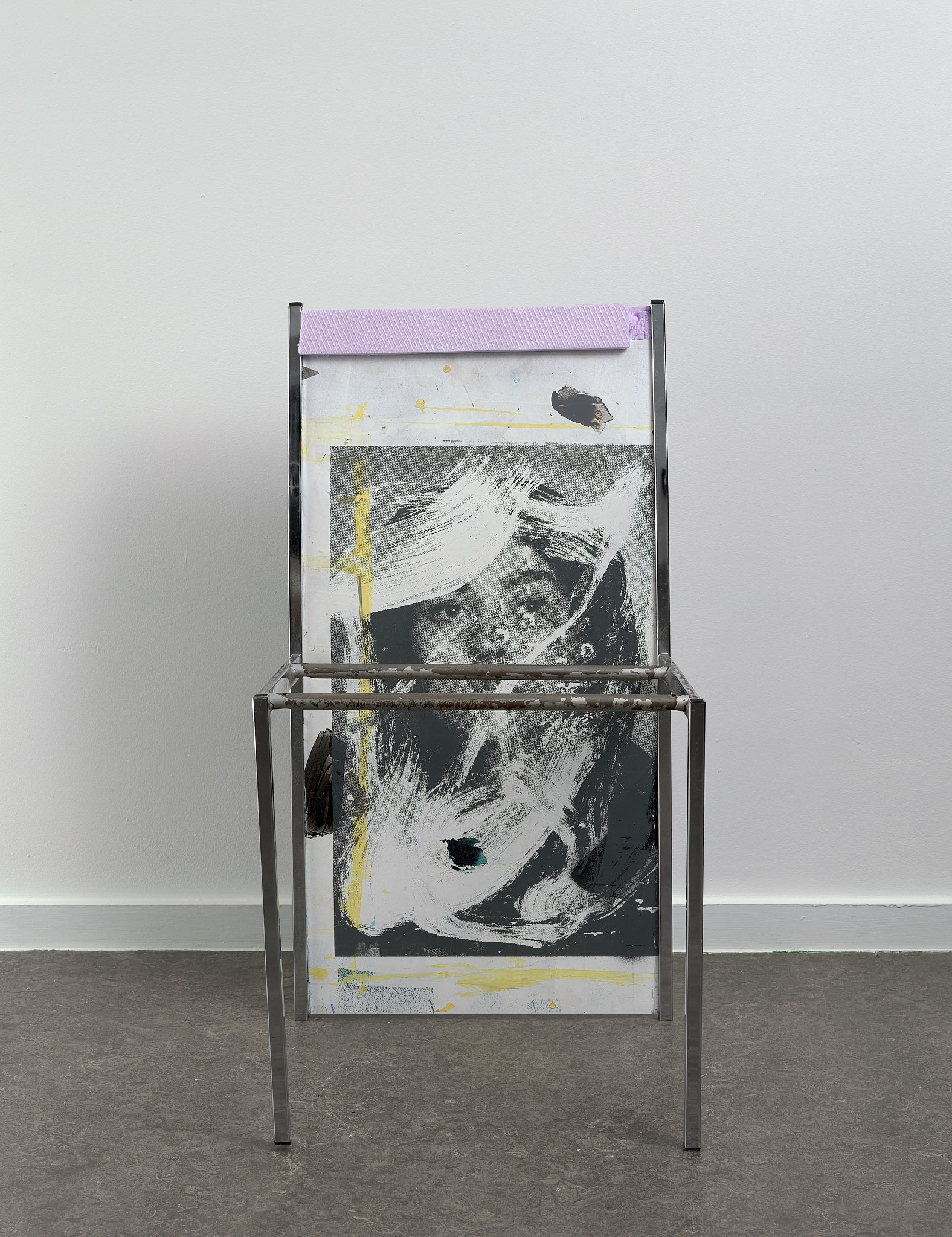 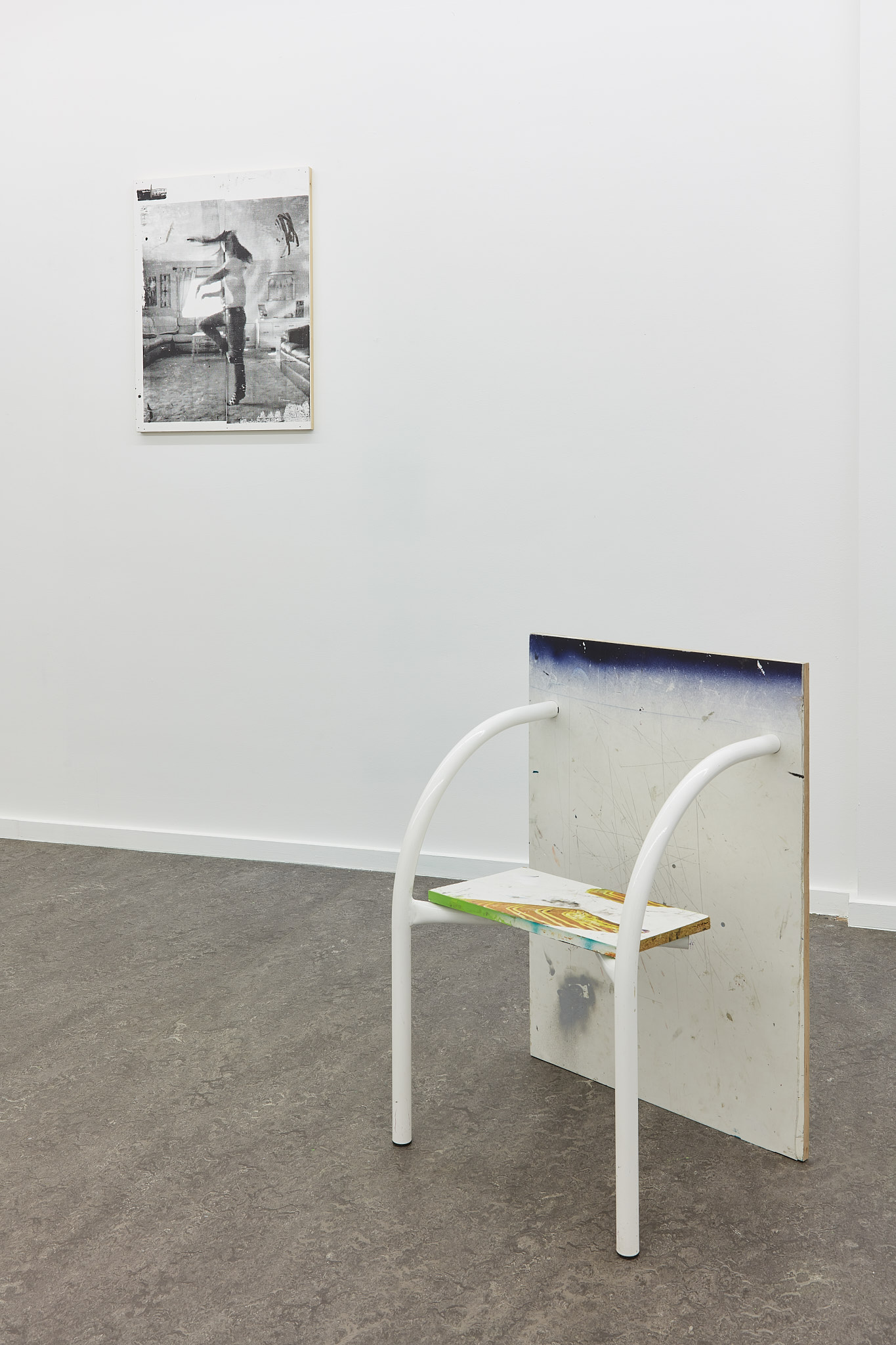 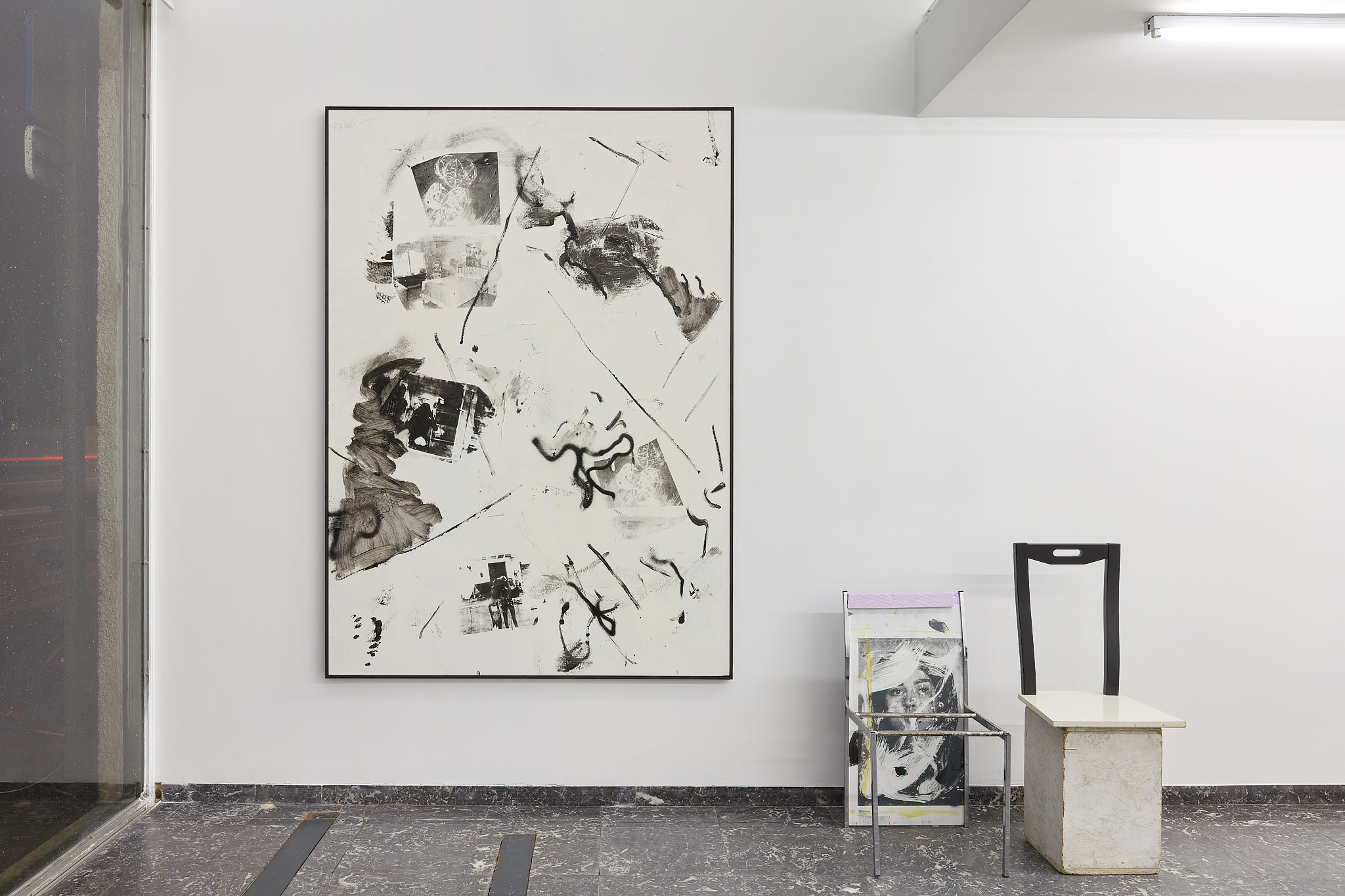 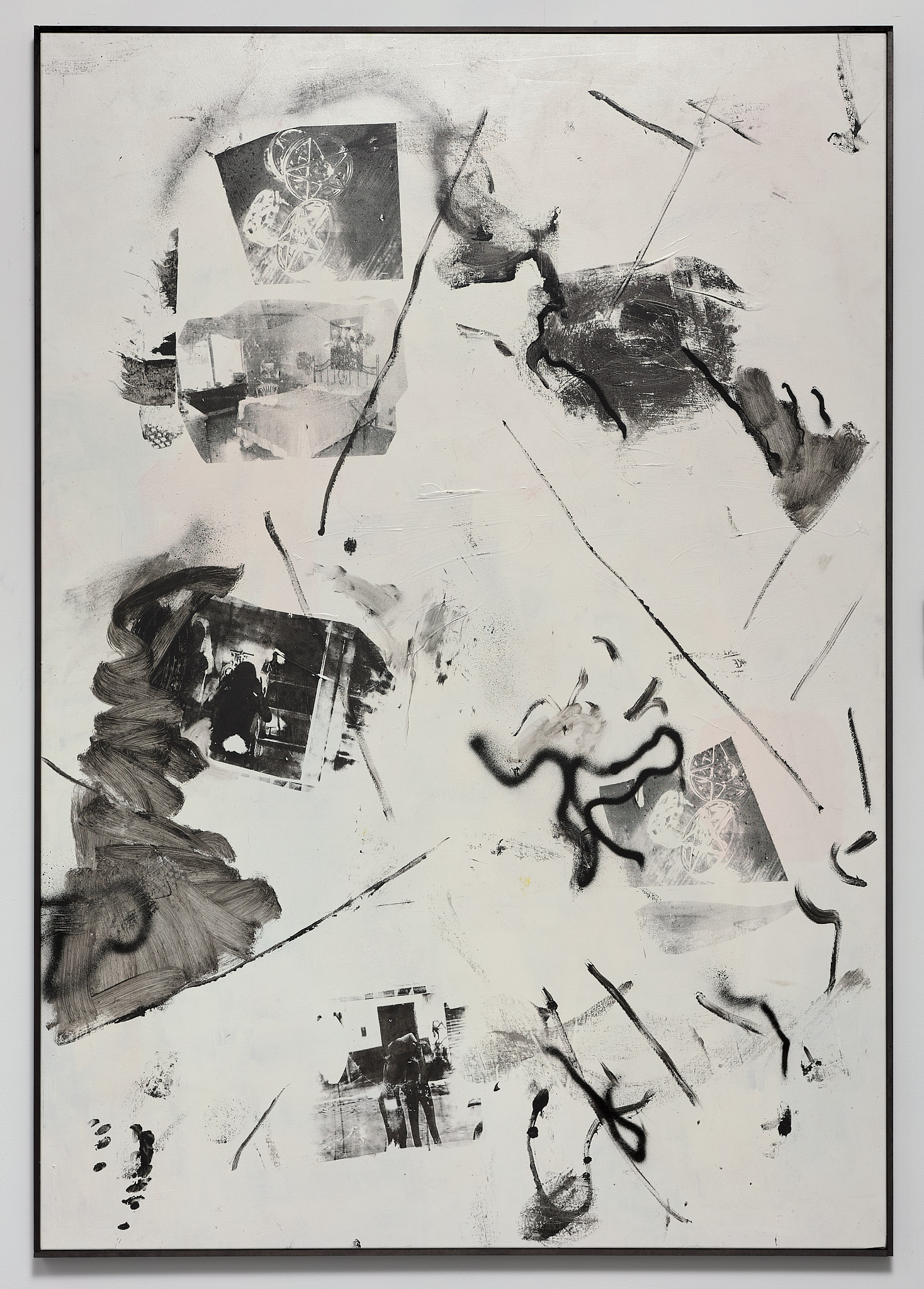