Francis Bacon at the Royal Academy of Arts

In January 2021, the Royal Academy of Arts will present Francis Bacon: Man and Beast, the first exhibition to chart the development of the artist’s work through the lens of his fascination with animals and its impact on his treatment of the human figure. Francis Bacon (1909–1992) is recognised as one of the most important artists of the twentieth century. Since his death, the world has changed in ways that make his unnerving work ever more prescient. This important exhibition will include 45 remarkable paintings spanning his career; from his earliest works of the 1930s and 40s through to the final painting he ever made in 1991, which will be exhibited publicly here for the first time in the UK. Among the works, a trio of paintings of bullfights will also be displayed together for the first time, all painted in 1969.

In Bacon’s paintings, man is never far from beast. That humankind is fundamentally an animal was a truth that lay at the heart of his imagery. From the biomorphic creatures of his earliest work, to the distorted nudes that define the latter part of his career, Bacon remained convinced that, beneath the veneer of civilisation, humans are animals like any other. Throughout his life, the artist was captivated by the movement of animals, tracking them on trips to South Africa and amassing a vast collection of wildlife books. By observing their uninhibited behaviour, he believed he could get closer to the core of humanity.

Broadly chronological, the exhibition will begin with a series of paintings of biomorphic creatures produced between 1944 and 1946 which suggest a disintegration of civilised humanity. The figures, which he described as being a distortion of the human body, relate to the Eumenides, or ‘Furies’ – ghostly apparitions, neither man nor beast - derived from his reading of Greek tragedy, particularly The Oresteia by Aeschylus. They also have links to Second World War sources, notably images of Nazi propaganda: the catastrophic advances in man’s capacity for cruelty that were taking place around this time that can be felt deeply in these works. The role of the crucifixion, which Bacon believed to be purely an act of commonplace violence, will also be explored in this section. In Fragment of a Crucifixion, 1950 (Van Abbemuseum, Eindhoven), a dog and an owl-like creature haunt the ‘cross’ while daily life continues in the background, describing a desensitisation that remains prescient today. By replacing a human figure with predatory animals, Bacon conflates the violence and suffering of a human crucifixion with the instinct of animals to kill.

Portraiture was central to Bacon’s exploration of the boundaries between the human and non-human animal. He was interested in the physicality of the head and how, stripped of the veneer of so-called civilisation, it could give expression to core instincts. In preparation for his first solo exhibition in 1949, the artist produced a series of six Heads – unsettling portraits in which not only identity, but species, is called into question. The characters are placed in cuboid structures, a compositional

device that appeared here for the first time and would come to define Bacon’s work. This section, which acts as a subversion of the traditional ancestral portrait gallery, will include three of the six Heads. The inner animal comes to the surface with particular force in Head I, 1949 (Metropolitan Museum of Art) whose snarling mouth originated in a photograph of a chimpanzee. Together, they demonstrate the genesis for numerous unsettling ‘portraits’ that Bacon would produce across the 1950s and 60s. Facing them will be two of Bacon’s portraits after Diego Velázquez’s Portrait of Pope Innocent X, in which the divine power of the sitter is replaced by the helplessness of a caged animal.

In the early 1950s, Bacon made two trips to South Africa. He was captivated by the dry, arid plains of the vast landscapes there, describing his excitement while watching animals as they moved through the long grasses. At the same time, he was consulting a range of books on wildlife photography. The following section will explore the presence of landscape in Bacon’s work, and its role in uniting human and animal figures in the same setting. Human bodies, stripped of the trappings of civilisation, are reduced to the vulnerability of an animal, while paintings of wild animals reflect his fascination with their behaviour.

The movement of human and animal bodies, and how it could distinguish or conflate them, will be the subject of the next gallery. Bacon was fascinated by the work of Eadweard Muybridge, whose photographic sequences of humans and animals in motion had a profound effect on his treatment of the human body. In Man with Dog, 1953 (Collection Albright-Knox Art Gallery, Buffalo, New York), the dog’s body is weighted with despair, perhaps a parallel for man’s ultimate isolation. Muybridge’s experiments also provided a means for the expression of erotic drives, especially his photographs of wrestling men. Bacon was openly gay long before homosexuality was legalised in 1967, and Two Figures, 1953 (Private Collection), sexualises the sporting scene in a daring affront to the law.

Bacon’s preoccupation with movement, and his blurring of human and animal bodies, paved the way for the extreme distortion that characterised his work from the 1960s onwards. The next section will demonstrate Bacon’s subversion of traditional representations of the nude. Although he painted more females than males, focusing on a small group of friends, his figures are contorted and gender is often ambiguous. In Portrait of Henrietta Moraes on a Blue Couch, 1965 (Manchester Art Gallery, Manchester), the sitter’s skin seems to have been ripped away, revealing the flesh beneath. In Triptych – Studies of the Human Body, 1970 (Private Collection), three ostensibly female figures clamber across a rail, underlining Bacon’s continual linking of human and animal movement.

At the centre of the exhibition will be a powerful trio of paintings of bullfights that present one of the most direct encounters between man and beast in Bacon’s oeuvre. Displayed together in this exhibition for the very first time, the paintings of the corrida highlight the fine lines between flesh and meat, violence and eroticism, life and death. The subject of the corrida was not only a literal confrontation, for Bacon it raised the contradictory attitudes people hold towards animals: he spoke of those who condemned bullfighting but wore furs and ate meat. These three two-metre high paintings communicate the fragility of man’s supposed superiority over animals.

The next gallery will focus on Bacon’s lover and muse, George Dyer – an East Ender with roots in the criminal underworld. The two met in 1963, and for the following decade navigated a relationship that was both passionate and violent. However, Dyer’s heavy drinking, combined with the disconnect in their social status, created increasing tension. He attempted suicide on several occasions and finally succeeded in 1971, two days before the opening of a major retrospective of Bacon’s work at the Grand Palais, Paris. Dyer had been Bacon’s principal subject throughout the 1960s, and the artist attempted to exorcise the profound guilt he felt in the aftermath of Dyer’s death by continuing to paint him in the 1970s. The four works in this room all depict Dyer, two painted while he was alive, and two after his death. They are a reminder of the material facts of life, in which humans are subject to the same mortality as all creatures.

The ‘Furies’ are one of the most consistent but enigmatic motifs in Bacon’s work. The two major triptychs in the following section will demonstrate their ongoing importance as ciphers for the guilt and sense of mortality that Bacon grappled with throughout his life. Triptych Inspired by the Oresteia of Aeschylus, 1981 (Private Collection), is the only painting in which the Greek playwright is referenced by name, yet Bacon played down direct links to The Oresteia. Instead, the biomorph in the left-hand panel has its origins in a photograph of a diving pelican that formed part of the detritus on Bacon’s studio floor. Bacon was haunted by the line ‘the reek of human blood smiles out at me’ and spoke of the vivid, aesthetic qualities of blood. The deep red of the trail of blood on the left-hand panel dominates all three panels of the other triptych in this room, Second Version of Triptych 1944, 1988 (Tate, London) in which Bacon returns to the ‘Furies’ of his works of the mid-1940s.

The exhibition will conclude with the last painting Bacon ever made, Study of a Bull, 1991 (Private Collection), which was not discovered until 2016. The bull emerges from the picture as if about to charge, but the black void behind has opened to claim it forever.

The exhibition is accompanied by a catalogue with essays by Michael Peppiatt, Stephen F. Eisenman and Catherine Howe. 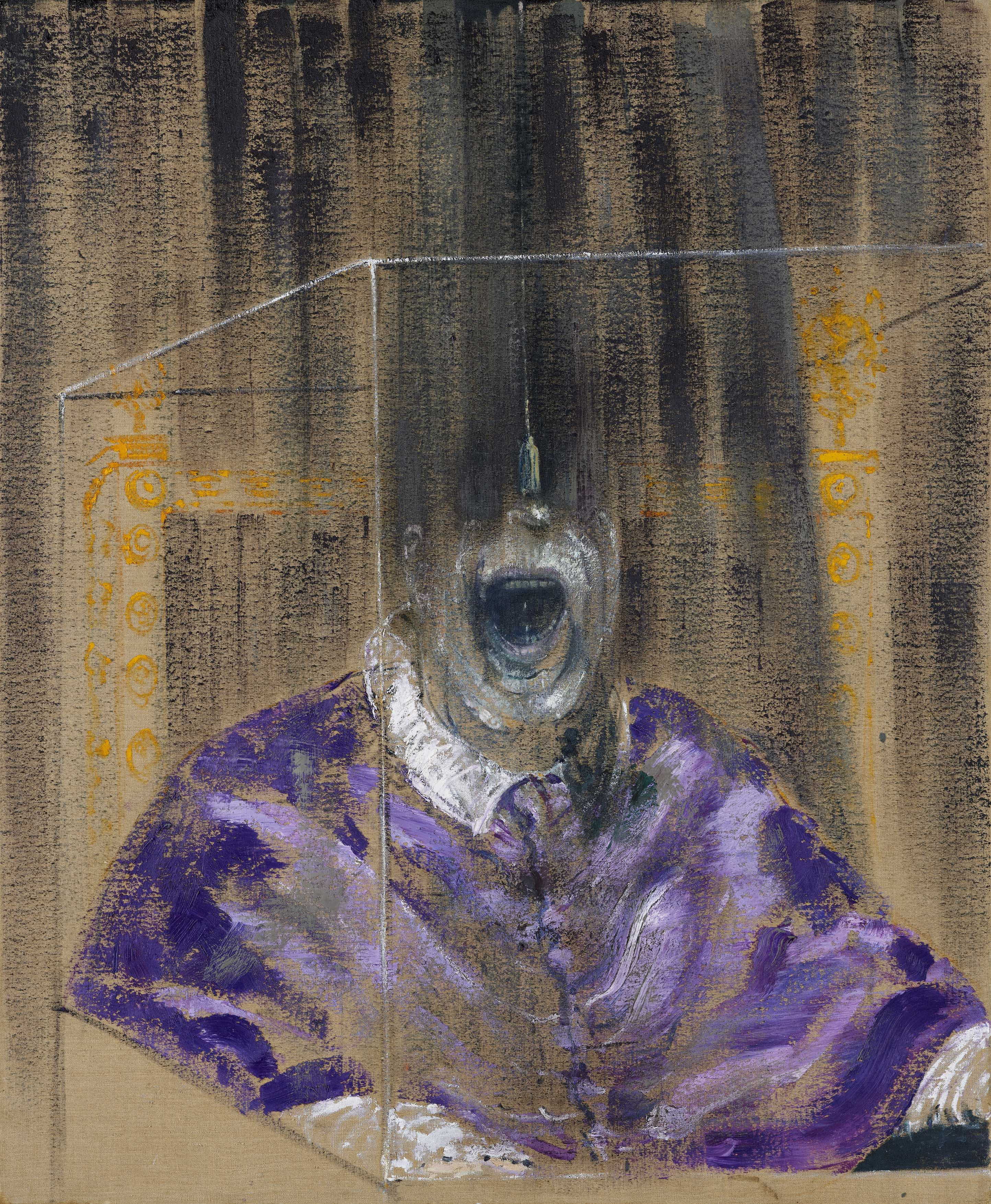 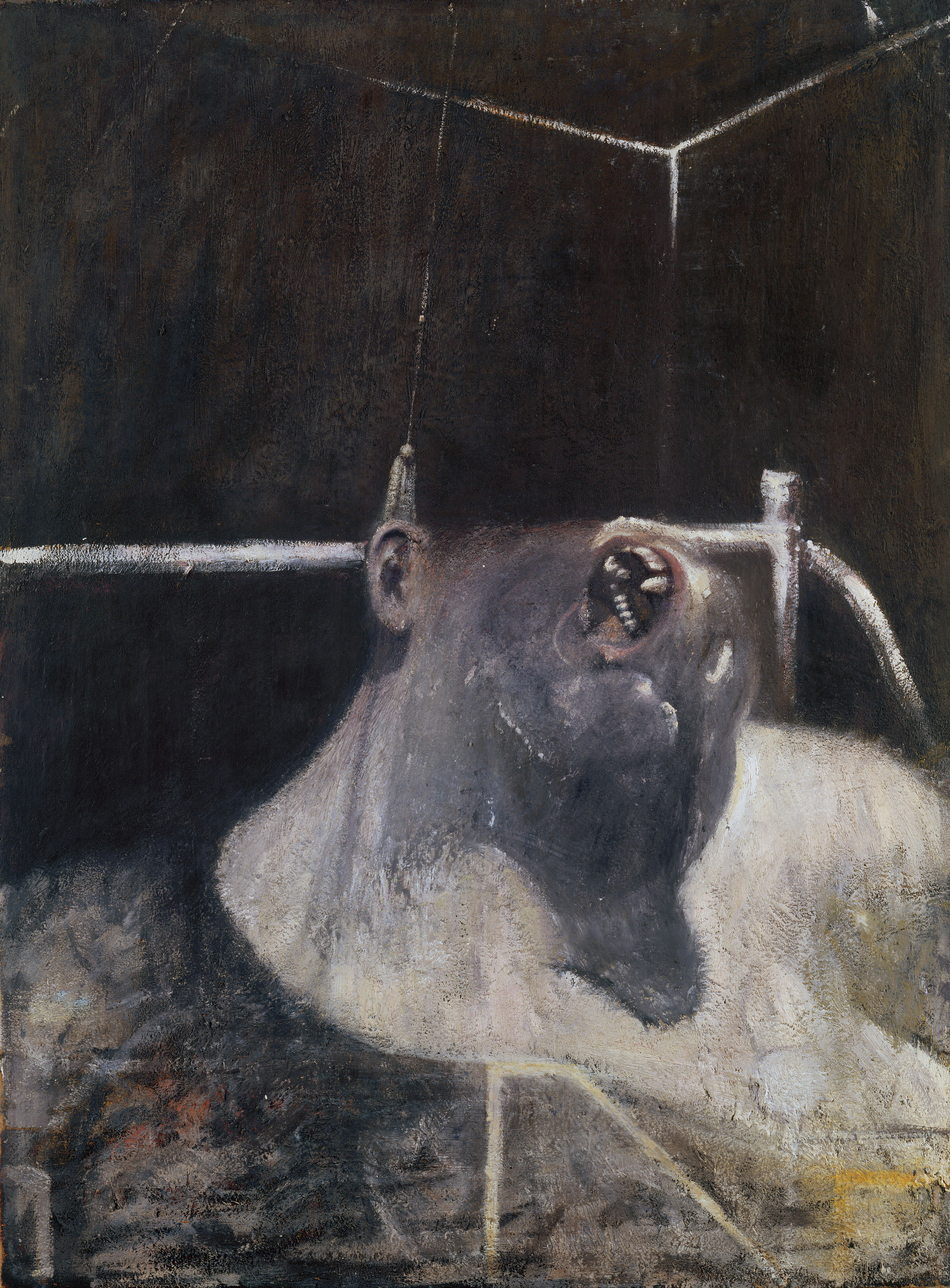 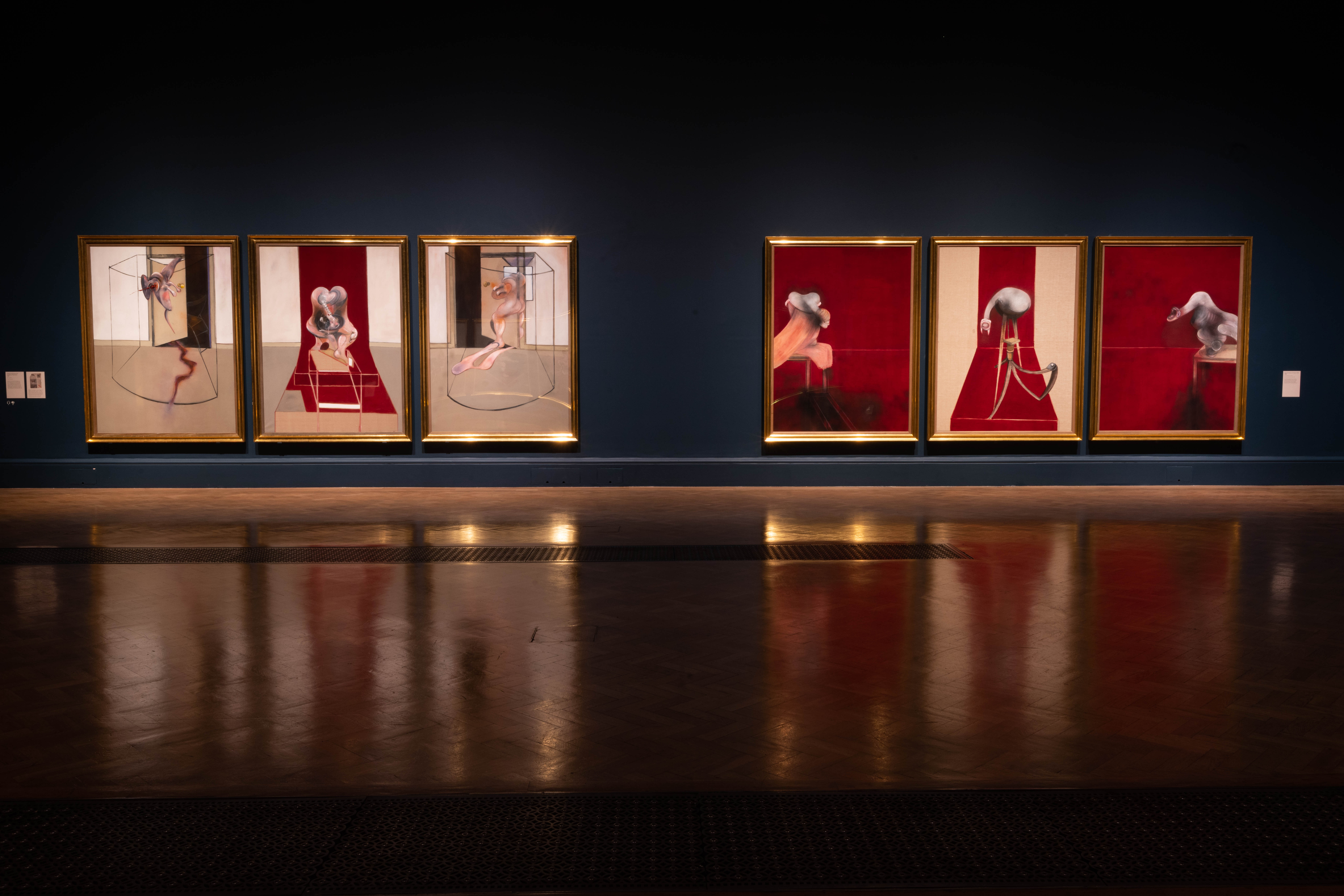 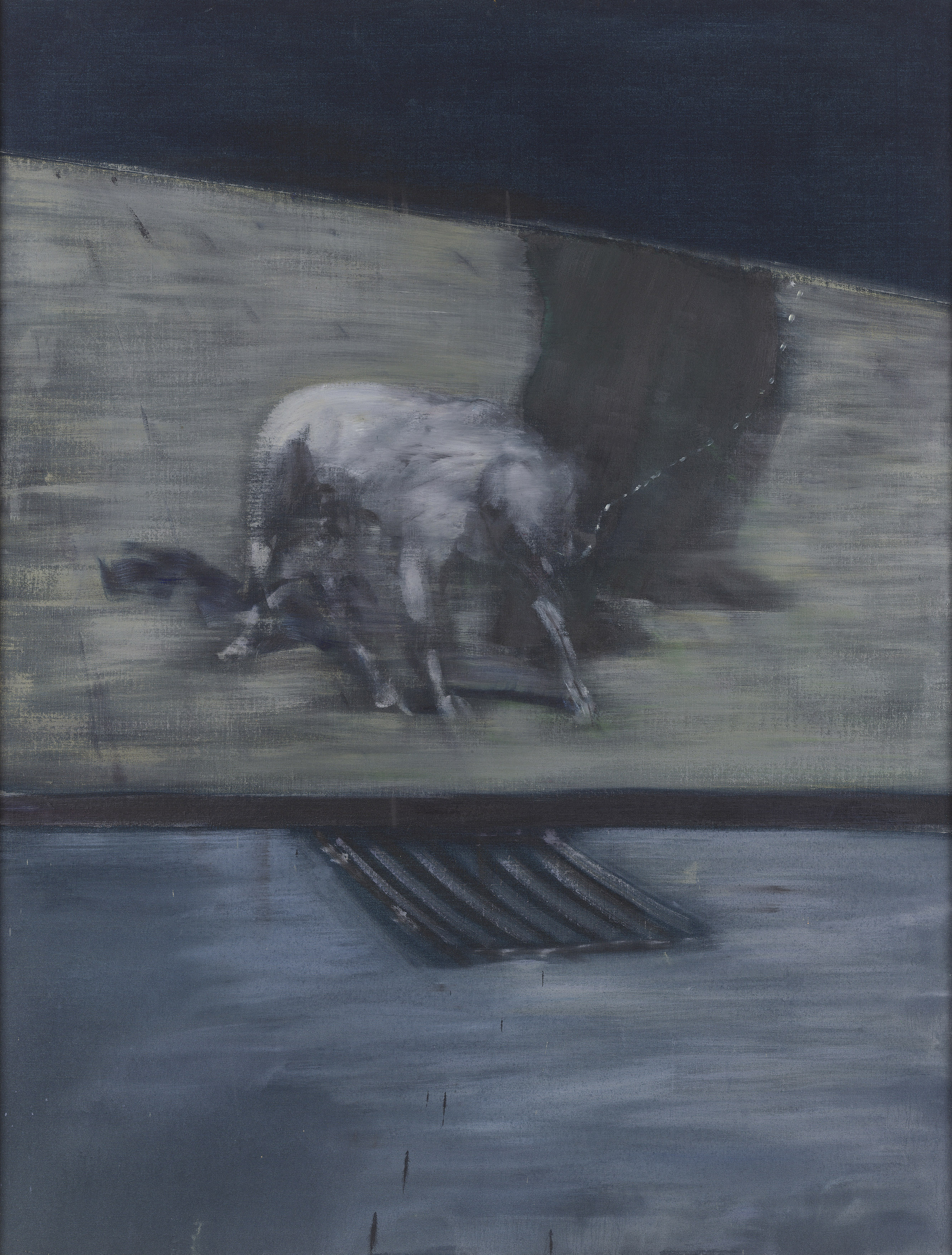 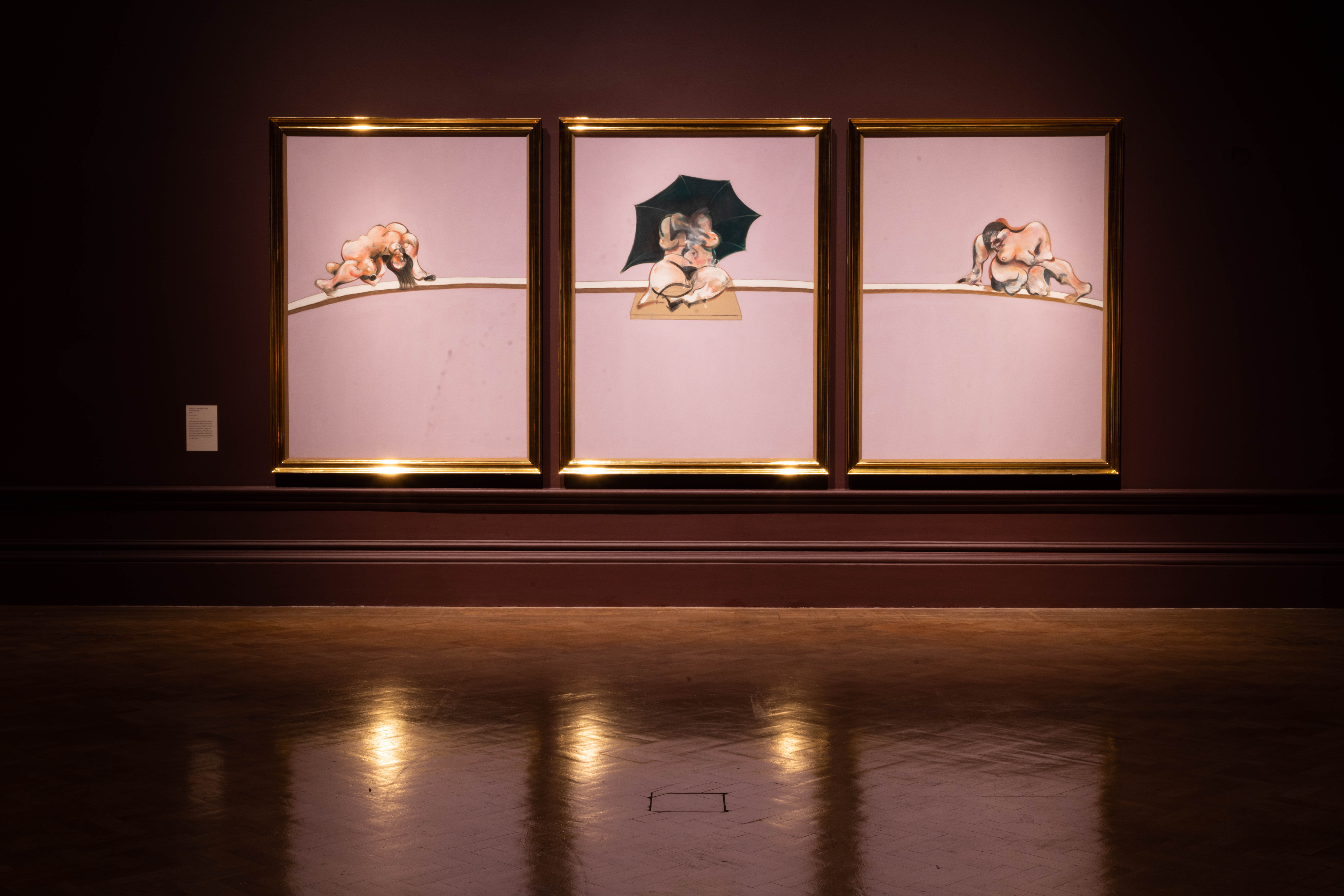 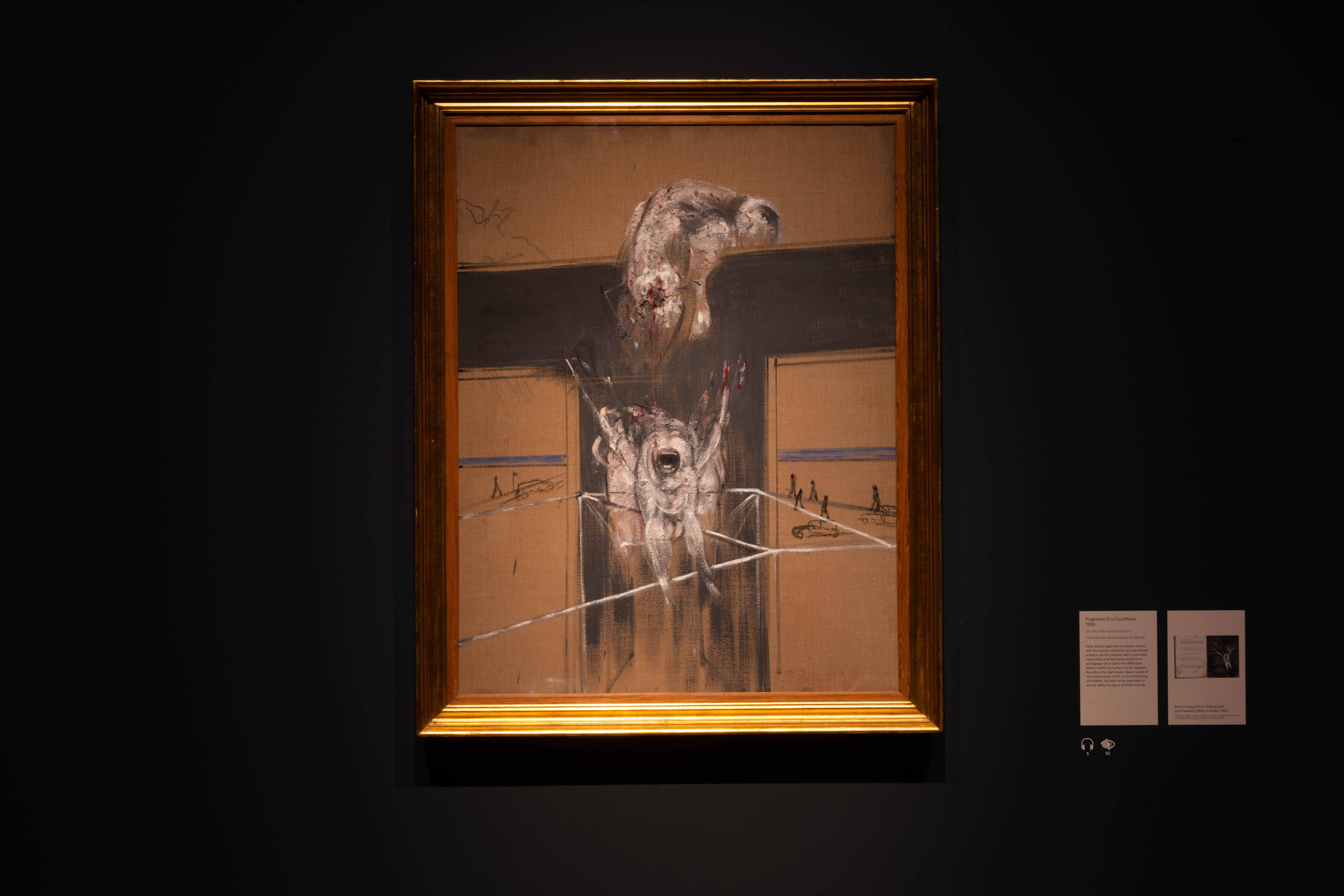 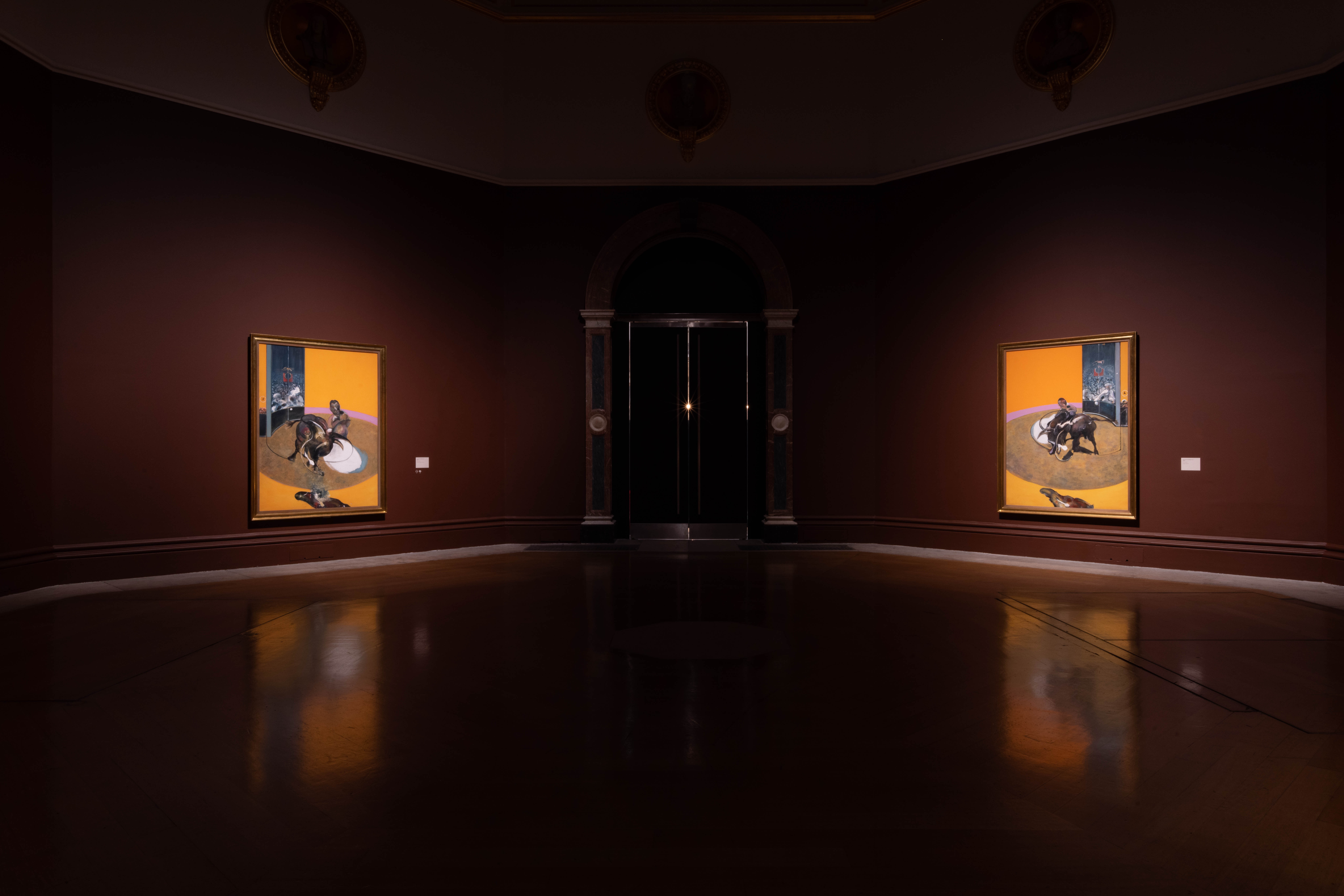 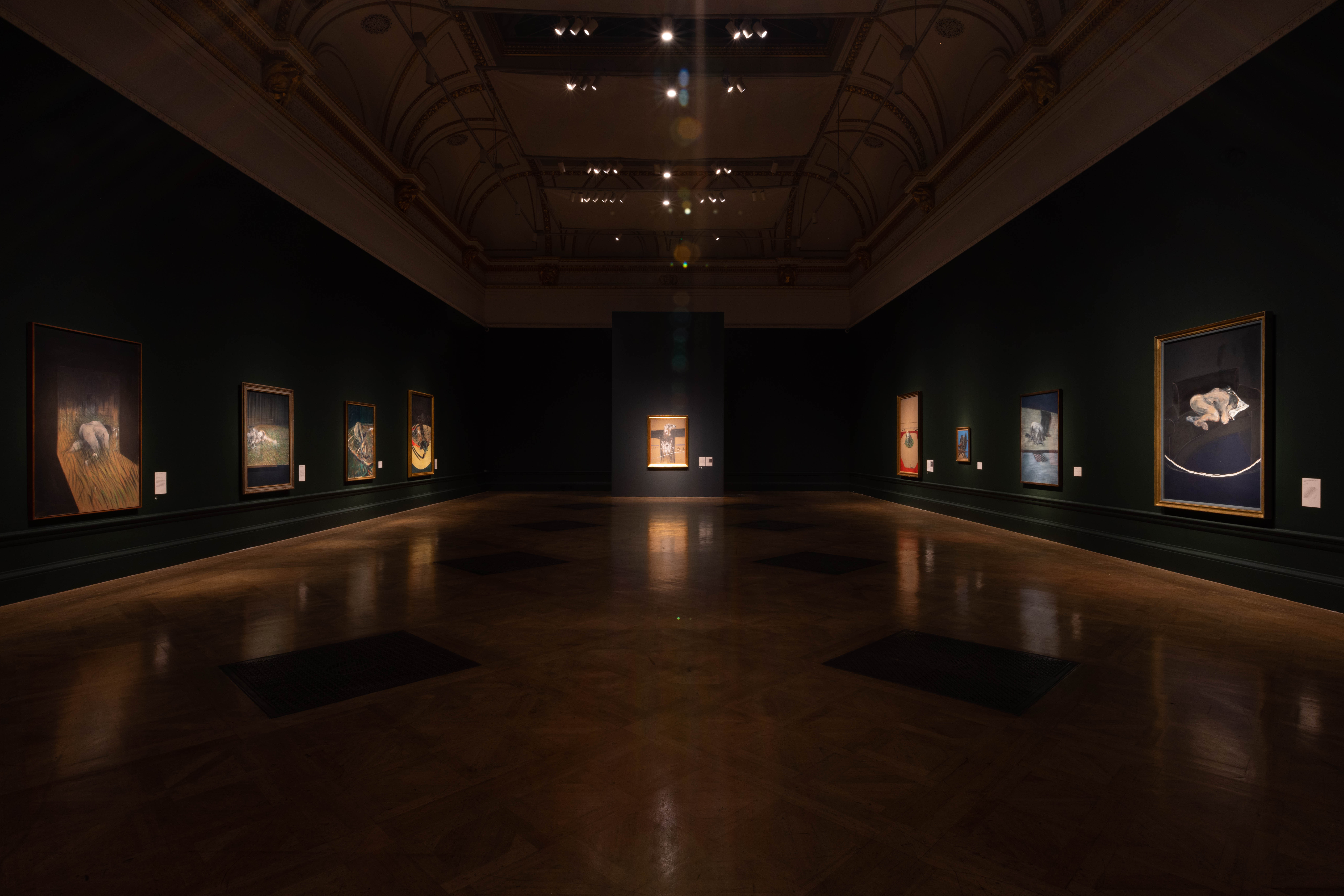