On top of the white Foam

Sor. MOR. Mores. C. How to read these letters and words, these sounds? The possible combinations seem indefinite and are at the same time already precisely set. In painting, on paper or recorded they appear in various mediums, standing alone and in configuration to form a frenzied syntax, a language resembling that of poetry, but also of messaging, of snippets of conversation, of song lyrics, or of secret code.

In her work, Sue Tompkins (*1971 in Leighton Buzzard UK, lives and works in Glasgow) plays out an interest in language and its inherent character of determination. Distorting words and sentences often drawn from everyday encounters,Tompkins’s language becomes ambivalent, perpetually caught between meaning and meaninglessness. Embedded in her multimedia practice is the excess that always accompanies language, taking place both within and apart from it. Tompkins’s work evokes a sense of understanding that is not material, not symbol or utterance, though attached to these vehicles and their logic.

Exuding the fragility and awkward etiquette of an encounter, Tompkins’s works are relatable but also nerve-racking—an anticipation that is reminiscent of the ubiquitous uncertainty in communication. We are in conversation with this work, as with any, but somehow feel it must be understood quite clearly because of the logic of language that it points to. In this, we might be left longing, mistaking the letters for a communicative lapse, when they could be understood as just that—an approach, in which the structure of understanding is outlined. Quickly and sometimes unexpectedly a prompt flits between exuberant humor and fortunate misunderstanding. It is, however, always sincere. A headlong dive into the attempt to conceive the every-day, to attain connections.

The exhibition On top of the white Foam at Halle für Kunst Lüneburg brings together new text works on paper, an audio piece, as well as a series of paintings developed since 2015. In all the works, the text that appears both emphasizes its specific medium and ties in with the others. The multi-coloured canvases appear like patterned backgrounds for text fragments, exaggerated screens in brightly coloured frames. Displayed in vitrines, the text works—typewritten on neon copy paper—come closest to the successive form of a narrative text, composed as a series of disjointed micro-narratives. In the audio piece, Tompkins repeats words over and over, altering their pronunciation slightly in order to shift their meaning, pushing them beyond the realm of recognition, into the absurd. A current is palpable in Tompkins’s voice, the words seem to just flow out of her, yet at the same time the piece appears as a precise arrangement, a composed improvisation or improvised composition. The uncontrollable is in these works, a moment of feverish unpredictability that is exciting and full of promise but carries with it the lingering possibility of an overflow—more in the plural, a somersault. Among this colorful, bounding cheer is the series Mixed Bag, 2022, in black and white, dated text consisting of headlines, descriptions of state of mind and listings of tasks on limber newsprint paper. More pensive than the other works, it constitutes a pause.

The words in Tompkins’s work are rhythmic, musical, when read can be heard, are written to be said, or, as does the title, suggest an image or invite a response. KU, don’t think about it x2, translate funny industrial—we sense a space of possiblemeaning. Yet it is not only what but how these words are written or spoken that animates them, they perform as part of Tompkins’s extended performative practice. 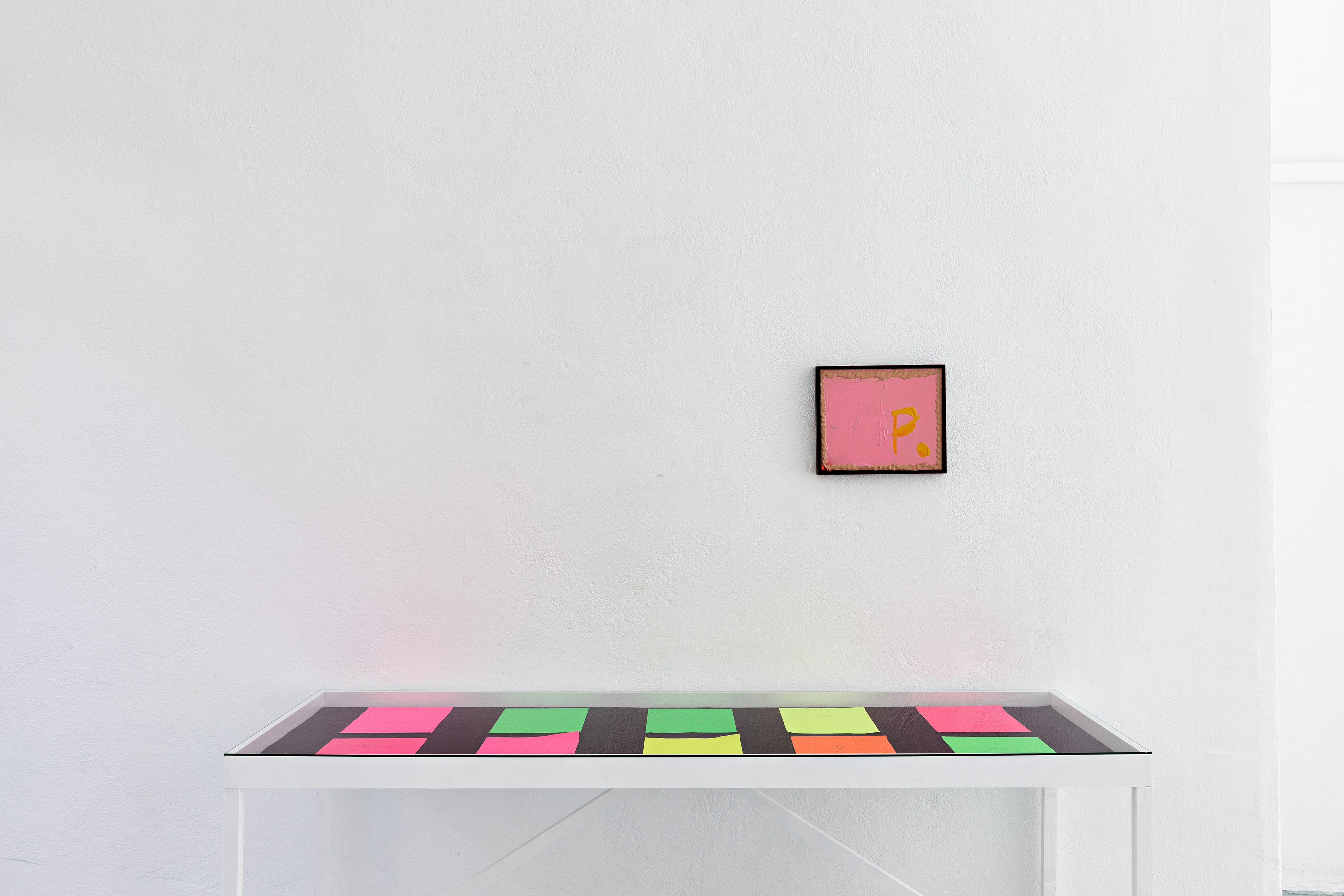 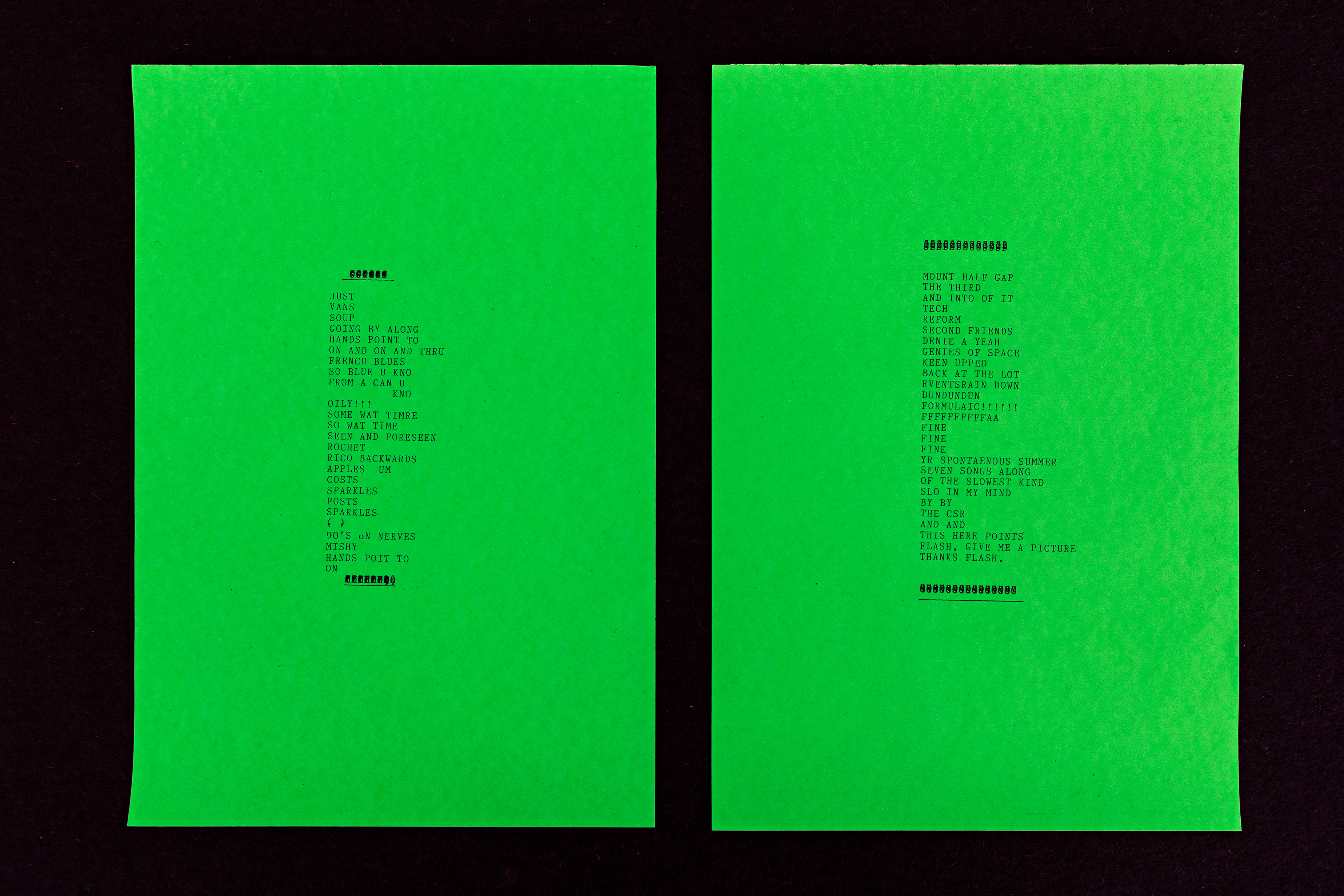 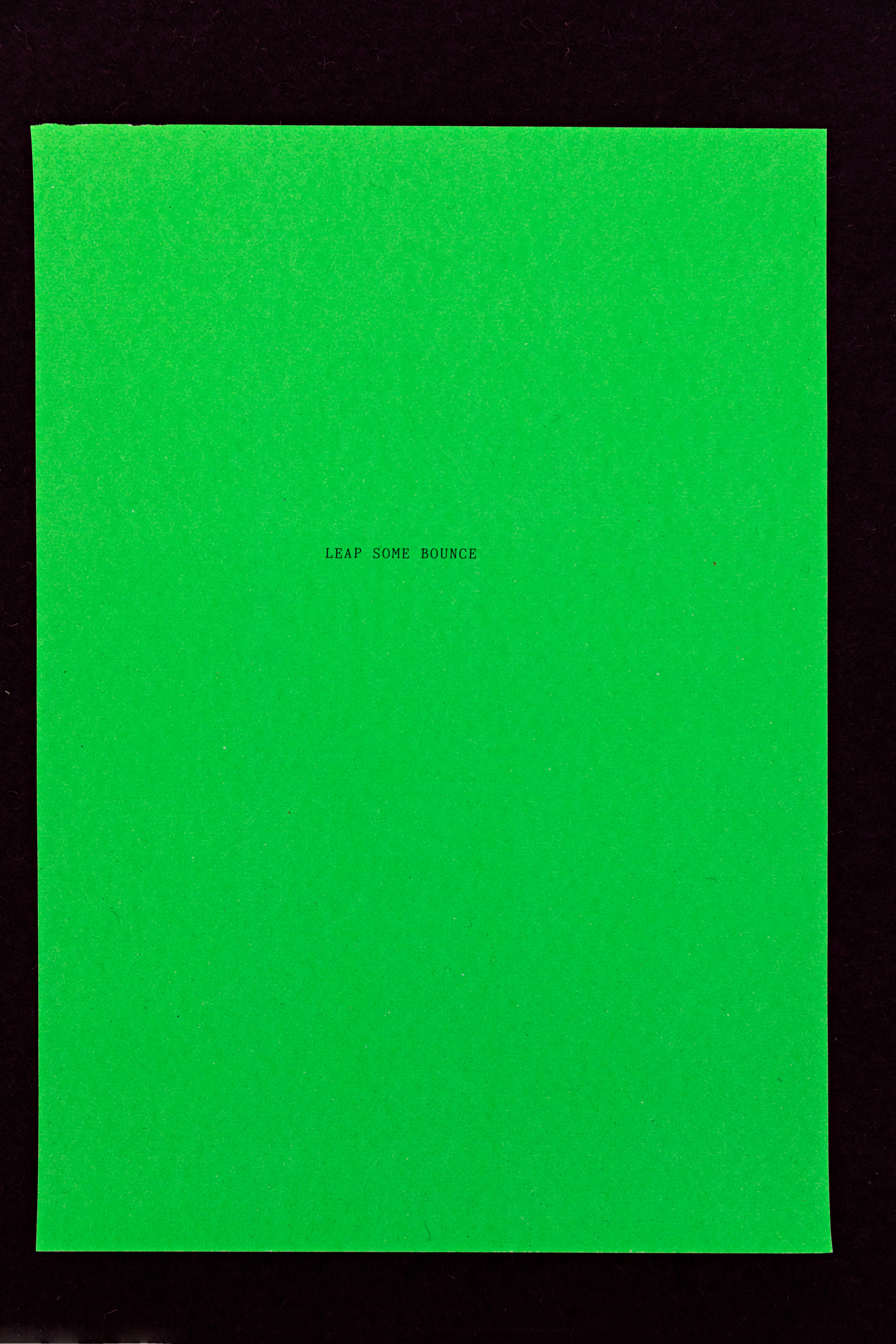 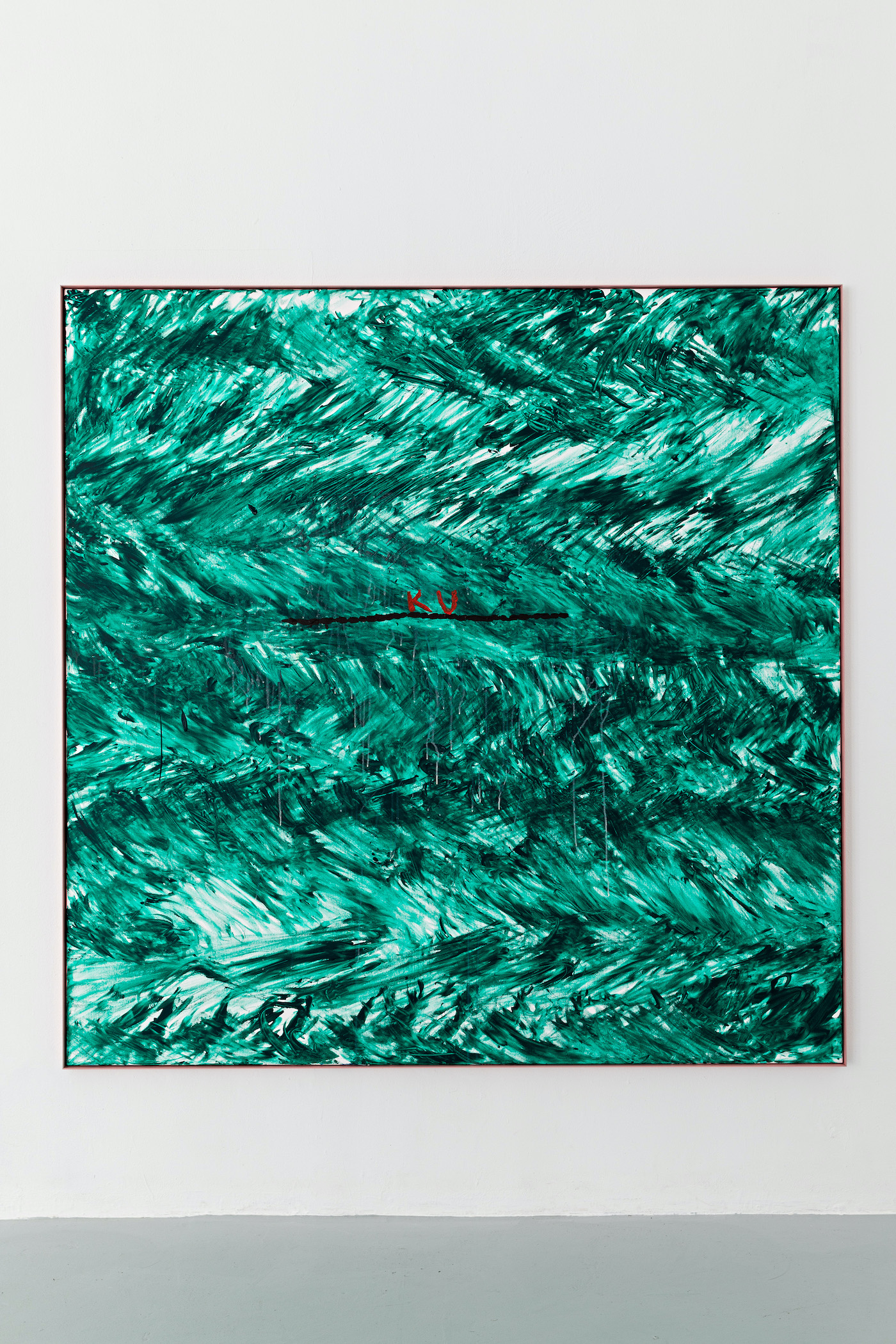 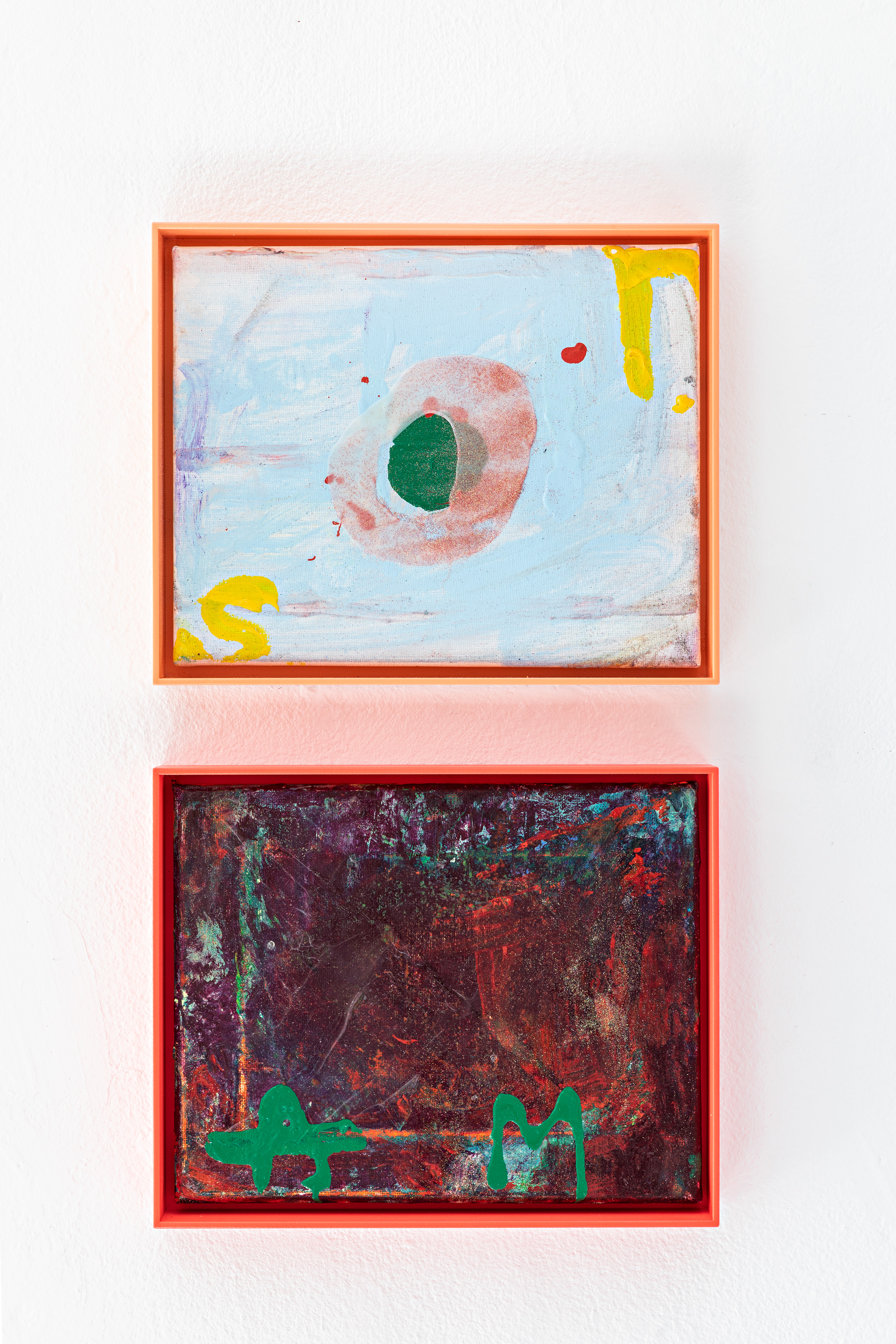 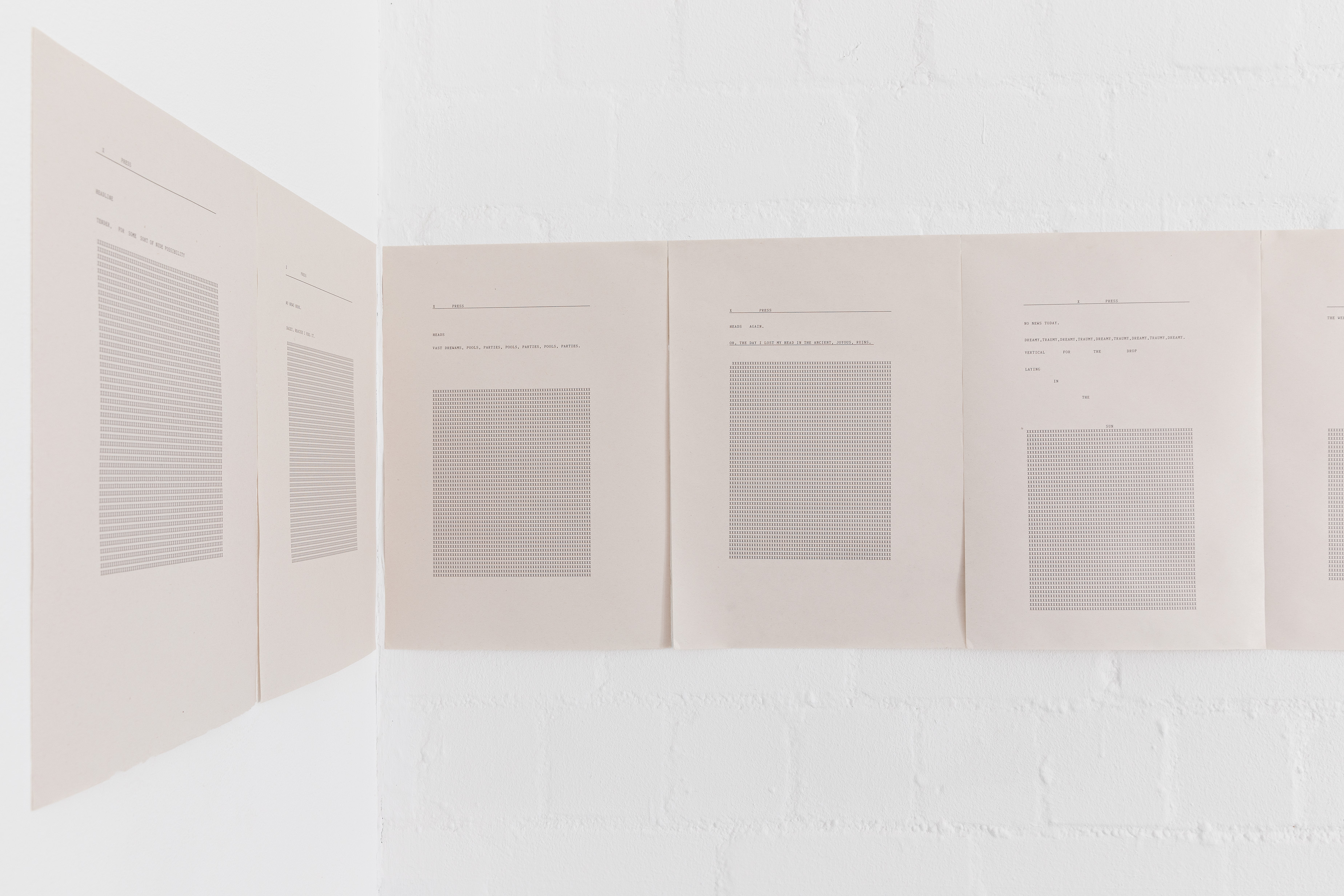 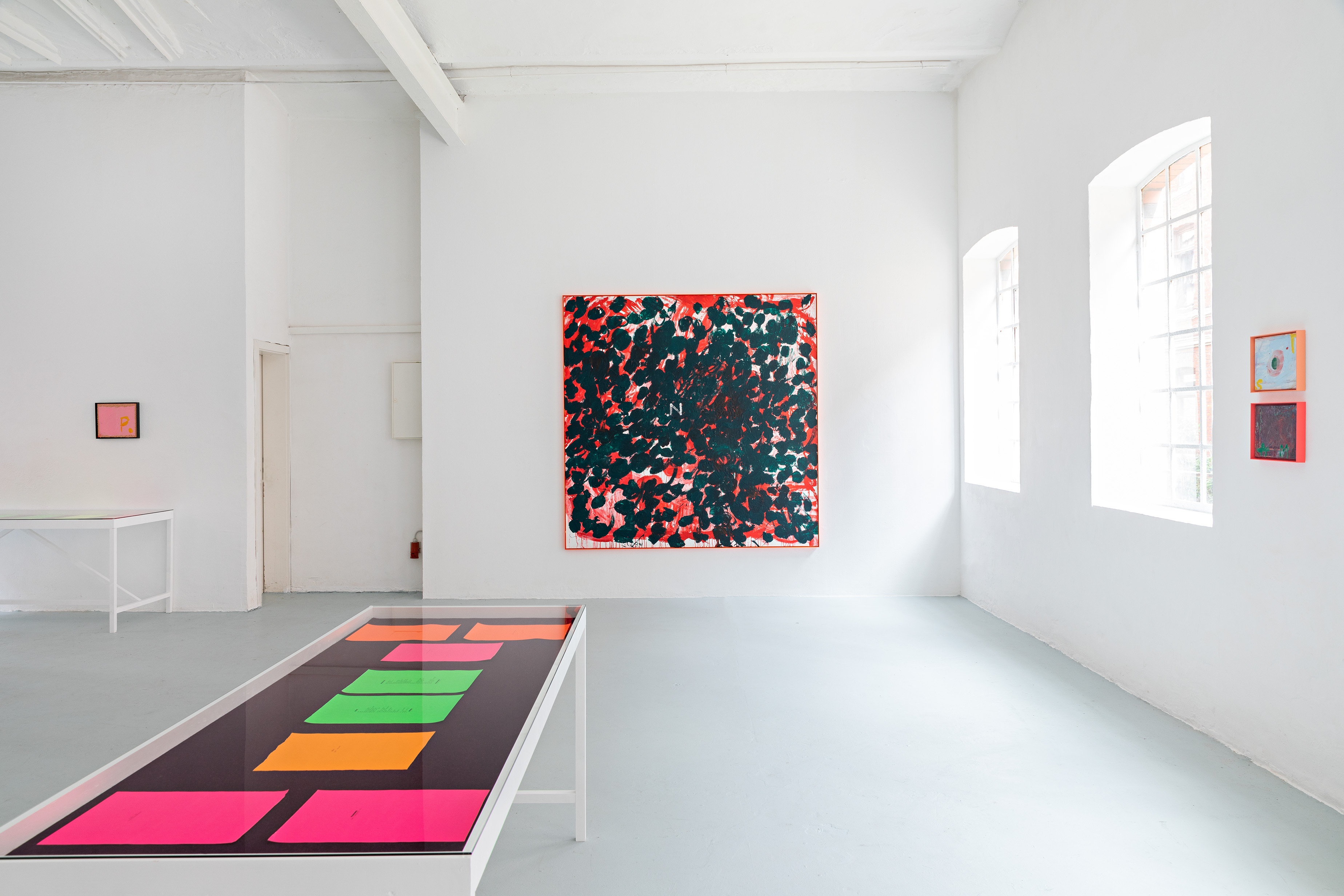 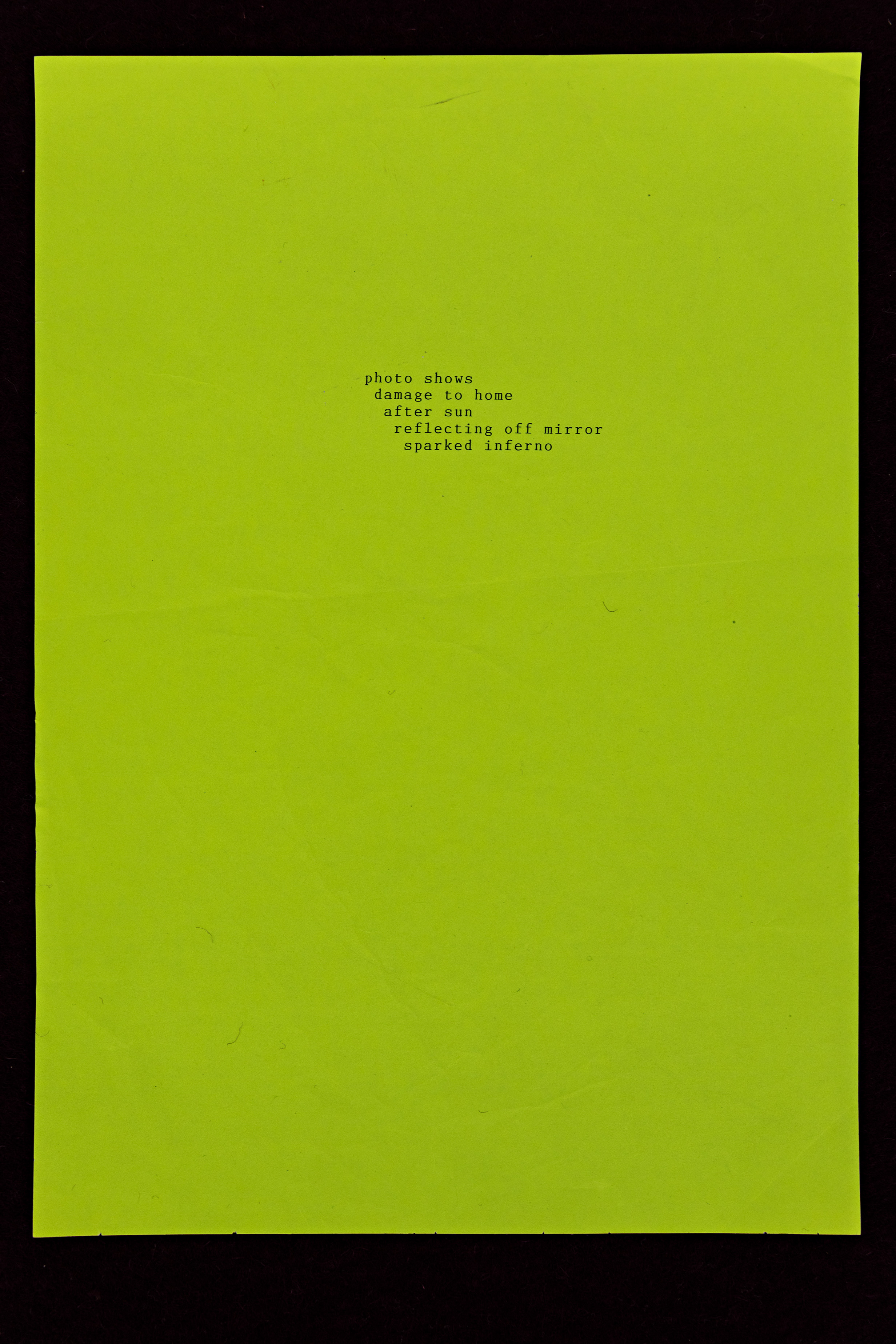