In Three Works Herald St brings together three singular artworks, a painting by Ida Ekblad, a large Ottoman by Jessi Reaves and a Diane Simpson sculpture from 1995. These major works can be seen as highlighting common ground between the respective practices; fashion as an intersection between art, formal design and vernacular culture. All three artists’ use of shape and substance challenges the definitions and expectations traditionally applied to ‘craft’. Industrial processes rub up against the handmade, and the artist’s hand intervenes in an object’s pre-conceived design, resulting in works both personal and fugitive.

Diane Simpson’s Boshi refers to a Japanese word for ‘hat’, and its form represents the shape of farmers’ hats traditionally worn in East and South Asia. Simpson typically draws and sculpts from a single category of clothing at once, and so Boshi was made during a period in the early 1990s when she was exploring headgear such as bonnets, bowler hats, kerchiefs and hoods. Whilst each of these head coverings contains a particular set of cultural beliefs and rituals, the artist’s interest is primarily in the formal language: the fabric, the shape, the drapery, and the tension and balance between these qualities. She begins by drawing on graph paper, which she then transposes into sculpture; in Simpson’s practice, Boshi is unusual in its display not on the floor at a 45-degree angle, but mounted on the wall and viewed head-on like a painting. Constructed from enamel, steel and spunbond polyester (a web-like fabric often used in upholstery and medical clothing), the Headgear series represented the artist’s move away from MDF, which she used almost exclusively during the 1980s. In combining soft, translucent fabric with industrial steel, Simpson interweaves architecture with design and fashion.

Jessi Reaves’ Floral ottoman with trapped table similarly plays with and against the vocabulary of design. A steel and glass table – ordinarily denoting sleek, understated function – has been engorged by Reaves’ crude, lumpen ottoman. This archipelago of hand-painted forms obstructs the table’s utility, both brashly and joyously decorative while also verging on dysfunctional. You don’t quite know whether to sit on it or not – is it painting? sculpture? furniture? Reaves has described these ottomans as ‘overgrown blobby forms that have swallowed other pieces of furniture’. They flirt with a kind of monstrous subjecthood, and yet persist as objects fundamentally aligned with modernist design, while also trying to escape.

Ida Ekblad’s signature use of Puff paint lends a sculptural quality to THE SAND, THE BEER, THE BUTTS, THE GLASS, THE MATCHES, THE SPIT, THE VOMIT, a work made in 2018 during preparations for the artist’s solo exhibitions at Kunsthalle Zürich and Museo Tamayo. Usually used to paint and print on T-shirts, Ekblad mixes Puff with plastisol inks to produce a more haptic form of painting. Colour literally becomes relief, and up close the surface is often craggy, with grooves from where it has been daubed and then heat-treated to dry it. As well as a painter, Ekblad is a sculptor, publisher, curator, writer, designer and music producer, and thus her source material is richly varied, combining interests in vernacular crafts, folk art and graffiti with fashion, literature and history. This work emerges from a series Ekblad made of fragments of porcelain recovered from Norwegian shipwrecks that she found in historical archives. Pattern, shape and perspective have all been flattened yet heightened by her materiality – images that lay buried for centuries now leap at you in vibrant, sculptural colour. 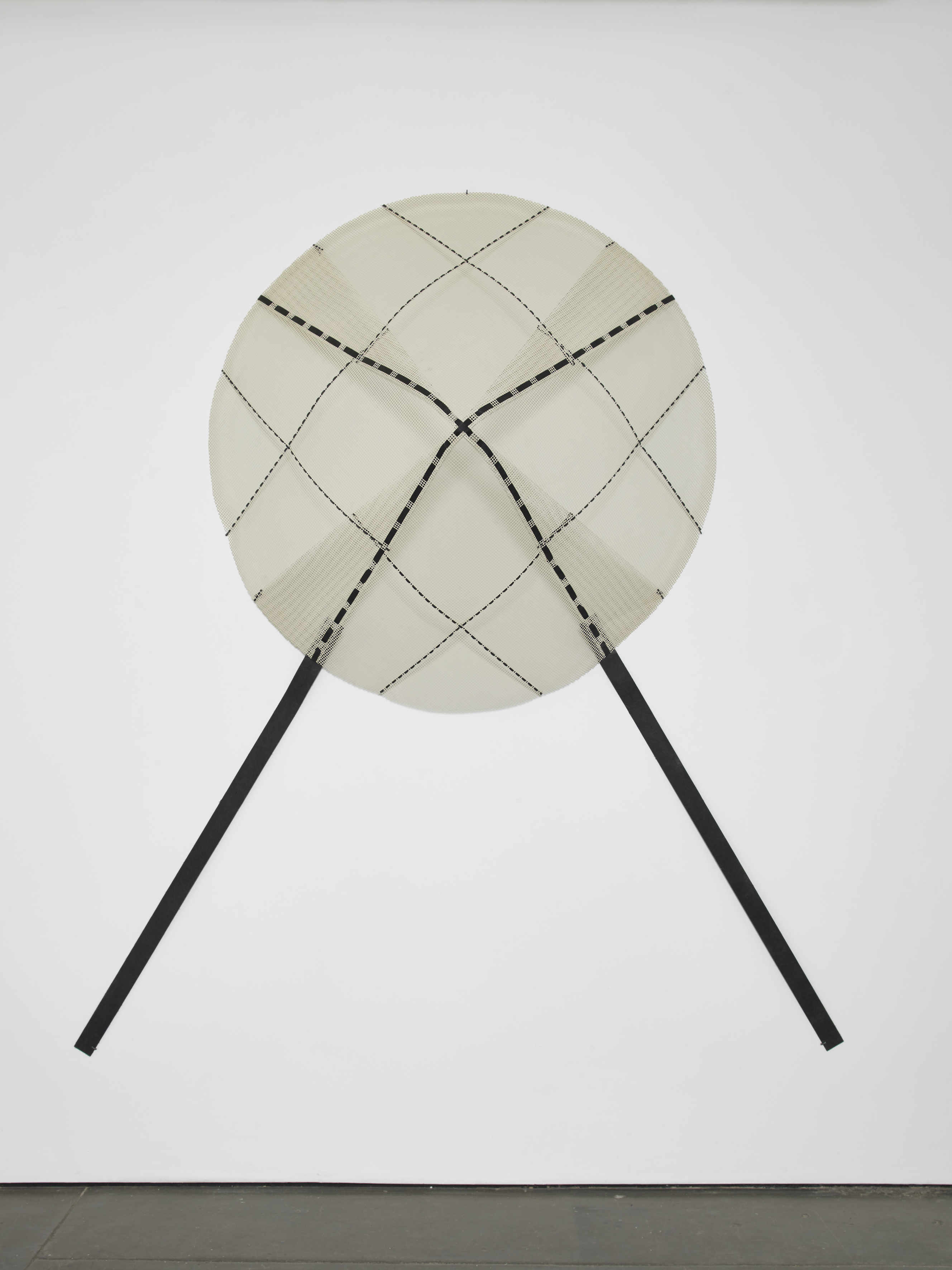 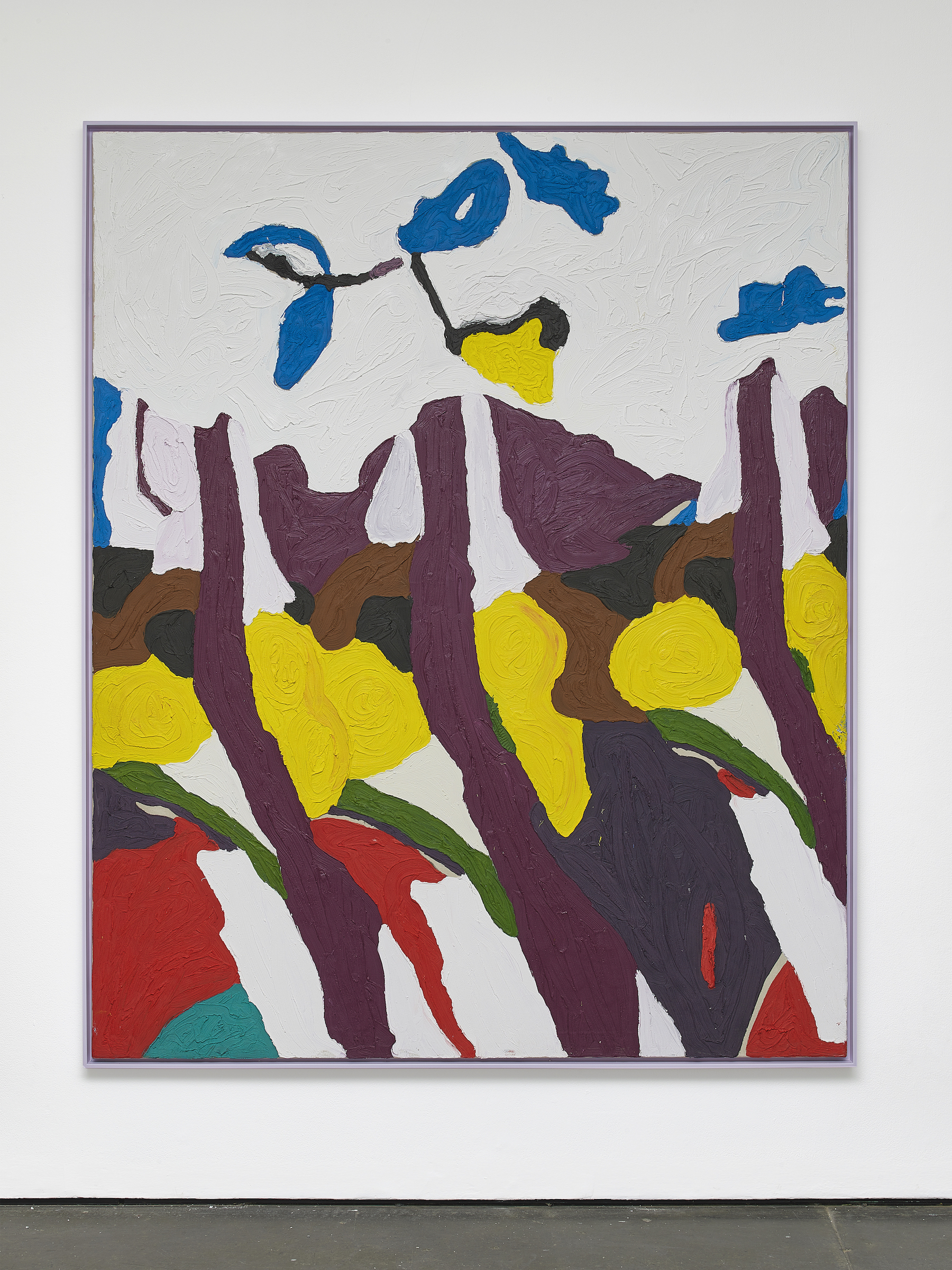 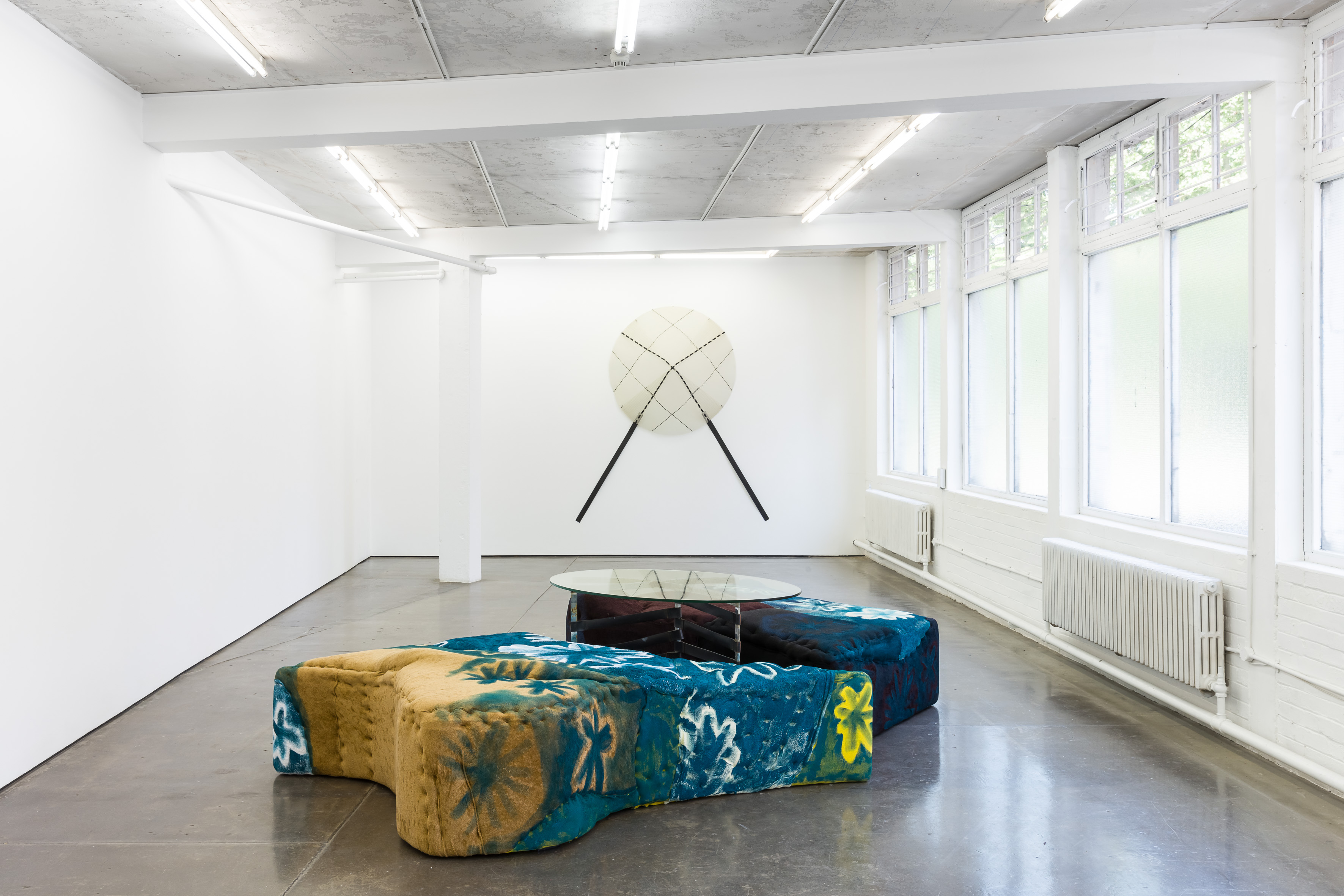 Courtesy of the artists and Herald St, London. Photos by Mark Blower 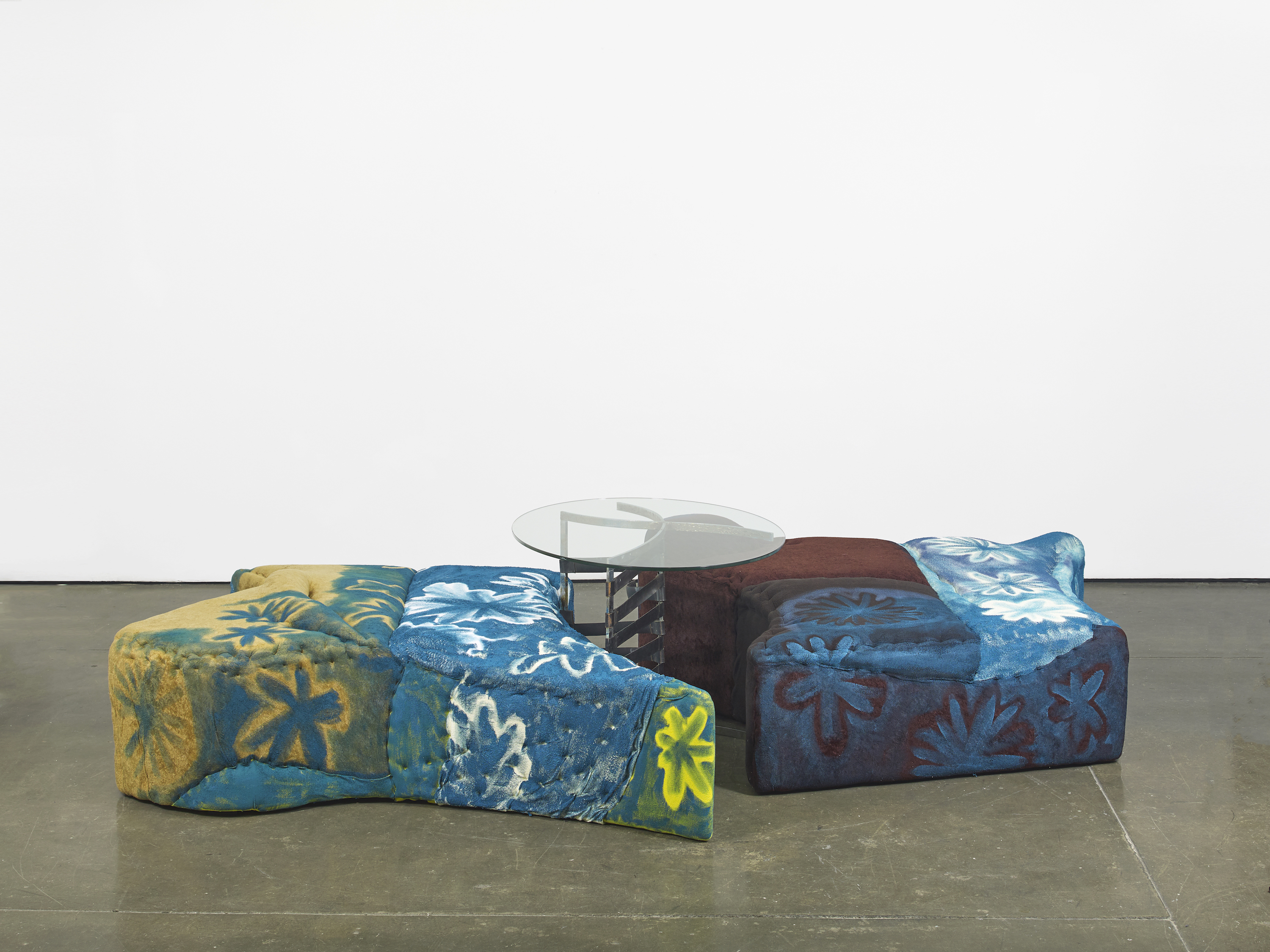 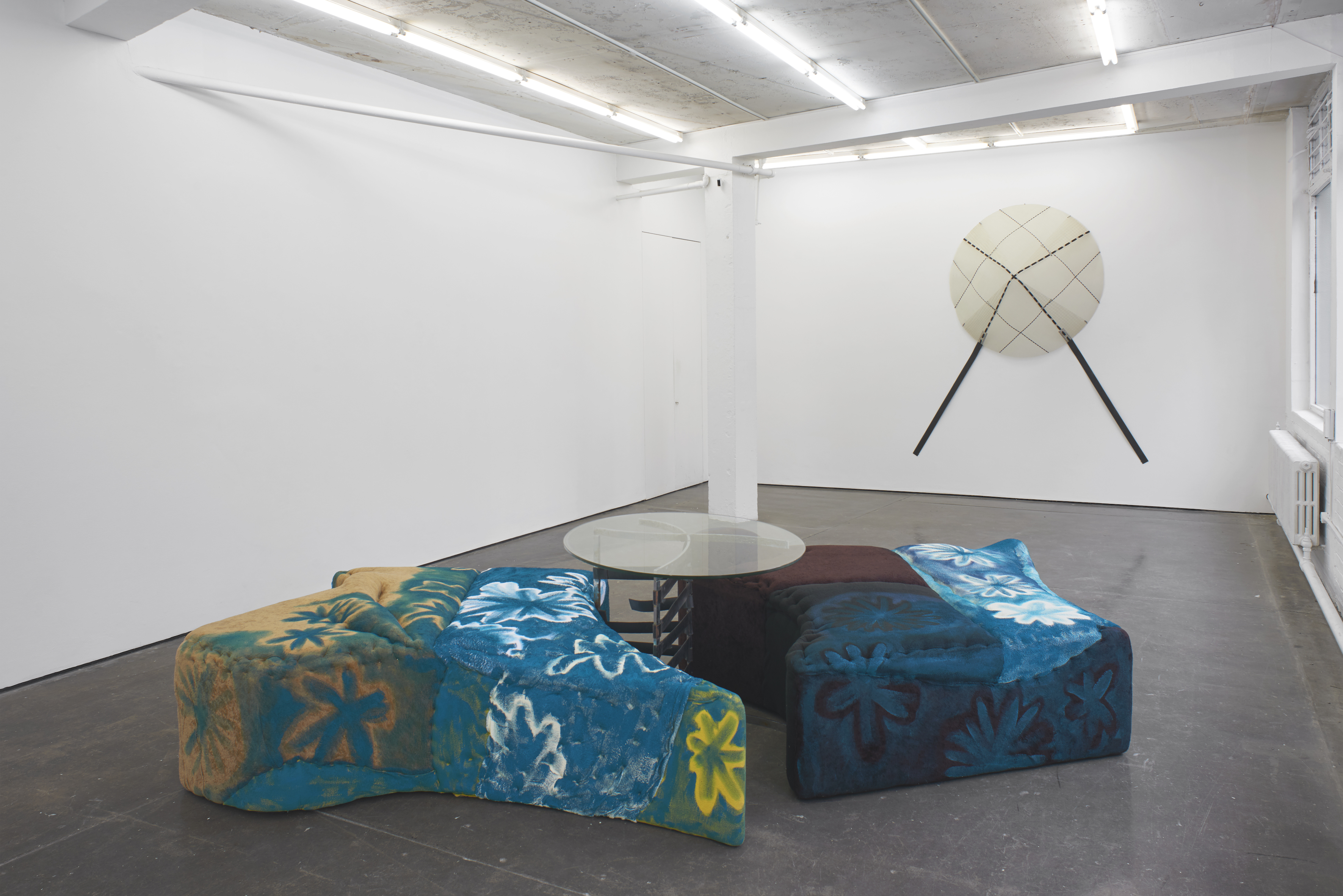 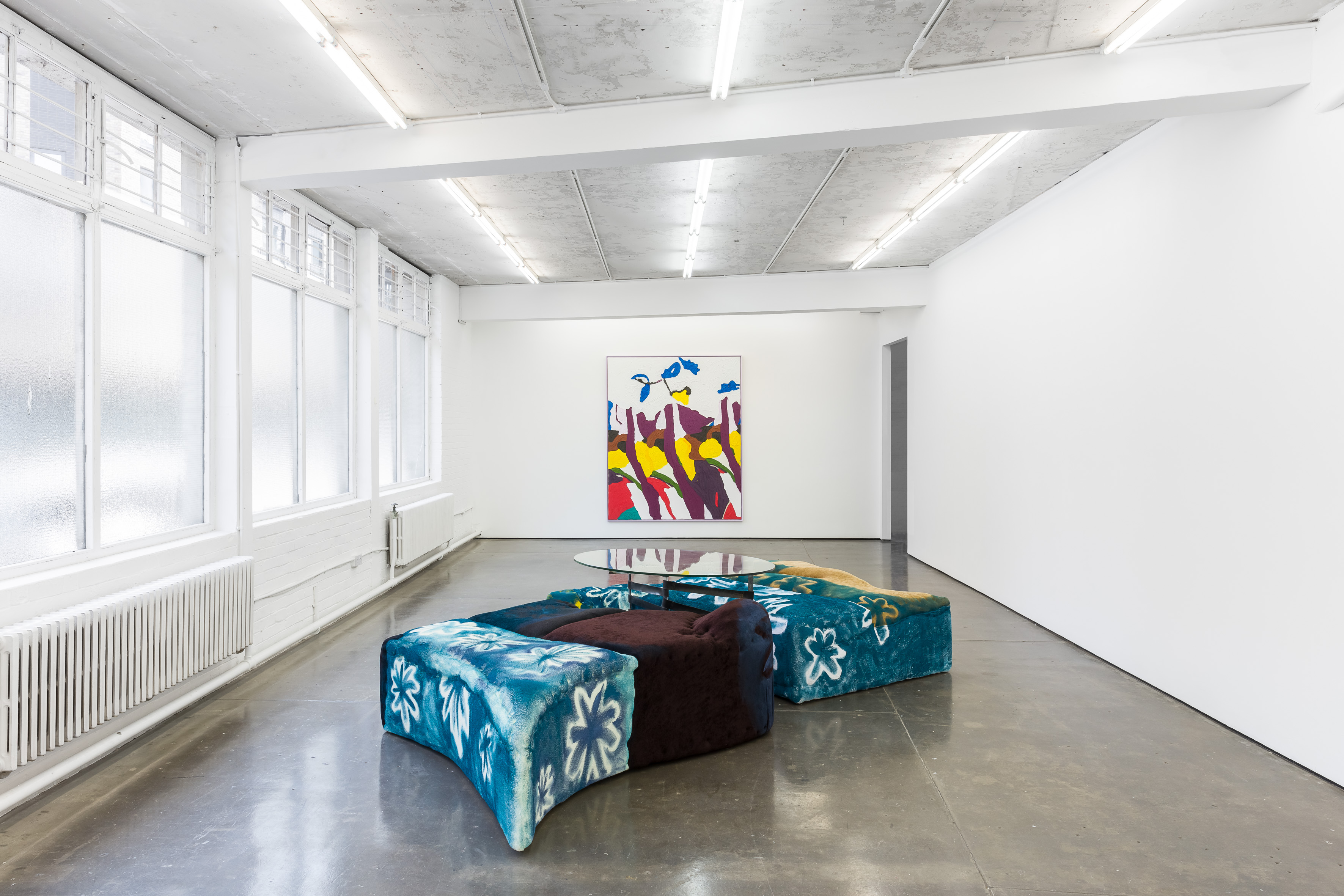