Alison Jacques is delighted to announce ‘How Much Love Can a Love Bird Love, Can a Love Bird Love a Love Bird’, a solo exhibition of new paintings by Sophie Barber (b. 1996, St Leonards-on-Sea, UK) and the artist’s inaugural show at the gallery. The exhibition follows Barber’s solo show at Goldsmiths CCA, London (2020), curated by Sarah McCrory.

Barber’s chosen title began life as an otherwise innocuous entry in the artist’s internet search history. (Contrary to popular belief, lovebird parrots do not die when separated, although the strength of their connection is heartening.) But in its repetition, the reconstituted tongue twister touches upon the unseen relationship between each of Barber’s subjects. Beneath the oil and the presence, these are paintings about affection, attraction, memory, love; the way in which certain images attach themselves to us – and we to them – for reasons more profound than subject matter alone. ‘To do this’, Barber says of her practice and of painting more broadly, ‘there has to be a level of obsession with an image. You have to be obsessed.’

Indeed, Barber’s work is less concerned with the practice of painting than the process that brings it to life: the manner in which imagery appeals to us, presses into us and, ultimately, becomes part of our visual language. From the standpoint of subject matter, Barber’s paintings are markedly incongruous. A-list celebrities rub shoulders with rolling valleys and varicoloured birds of paradise; fragmentary allusions to the artist’s hometown on the East Sussex coast are brought in line with rough-hewn replications of iconic works from art history. Aside from the doughy materiality through which these works are brought into being, the sole constant across Barber’s paintings is Barber herself, at the centre of the flow as the images of the world wash over her.

When discussing her work, Barber uses her own organisational logic. The paintings are, where appropriate, TV-size, iPad-size, iPhone-size. This technologically informed shorthand obviates the need for a precision otherwise uncommon to Barber’s paintings, but it also tallies with the provenance of much of her material. Whether singers or songbirds, artists or artworks, these multiform images are scraped from laptops, phones and tablets, from fugitive screens seen in the corner of an eye. Kendrick Lamar is lifted from an Annie Leibovitz portrait shot in 2018; a cerulean-eyed blackbird migrates from a video on YouTube documenting an intrepid group of twitchers. ‘It’s like having a conversation with people’, Barber says of these duplications, these fond dedications, ‘images as people’.

As such, the assertive material presence of Barber’s work makes heavy and felt a visual experience of the world that is, by design, fleeting. Wrapped in thick bundles; drooping from walls; built up from oil, crayon and the occasional footprint, these paintings lend visibility and physicality to the way in which images glide over us online, not leaving the perfect imprint of their likeness but the hazy memory of their form. ‘It’s not about the image being right’, Barber says of her portrait of Justin and Hailey Bieber, who coalesce in a garden of uneven greens, ‘it’s about how you remember it’. In this, Barber’s artistic impulse could be read as a need to pull images back from the brink: to liberate them from the loose vagueness of memory and paint them into the world once more.

And just as memory is fallible, liable to twist and turn and fold in on itself, so too are Barber’s painterly tributes defined by their instinctive yet expected imperfections. Brazen brush marks push up at edges; drooping surfaces twist against forms; bright declaratives play associative games with their famed subjects. (‘KENDRICK LOVES CAMBER SANDS’; ‘JUSTIN LOVES GARDENERS WORLD’.) Through this uniformity of painterly application, Barber not only speaks to the imprecision of recall but enacts a material flattening of our visual world. Celebrities are stripped of social status, reduced to the level of blackbirds and toucans and forced to survive as images alone. ‘High’ and ‘low’ culture are treated with a brush of equal width. In this, Barber enacts an egalitarian approach to image selection; a democracy of depiction told through layer on layer of thickly worked paint. 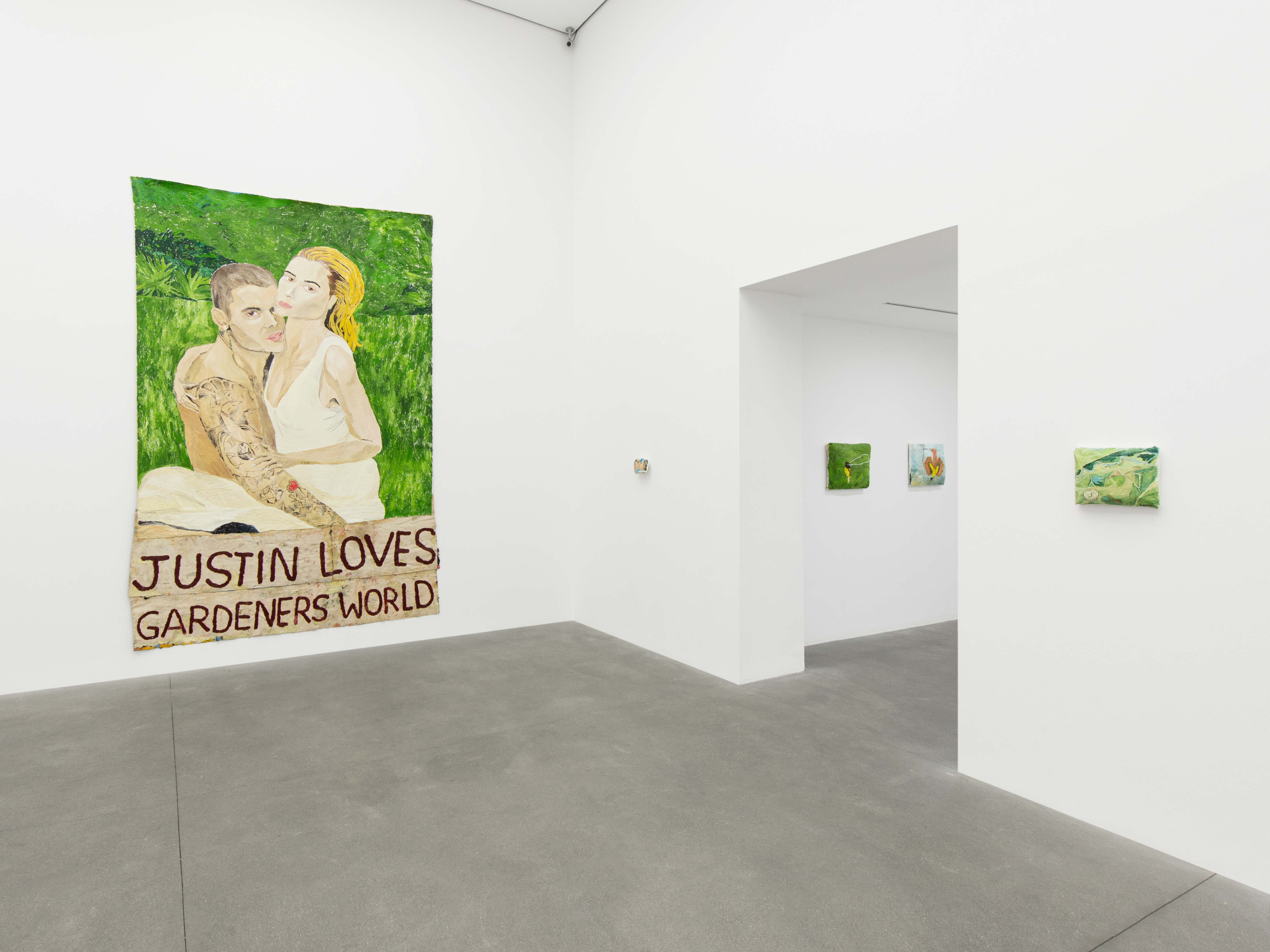 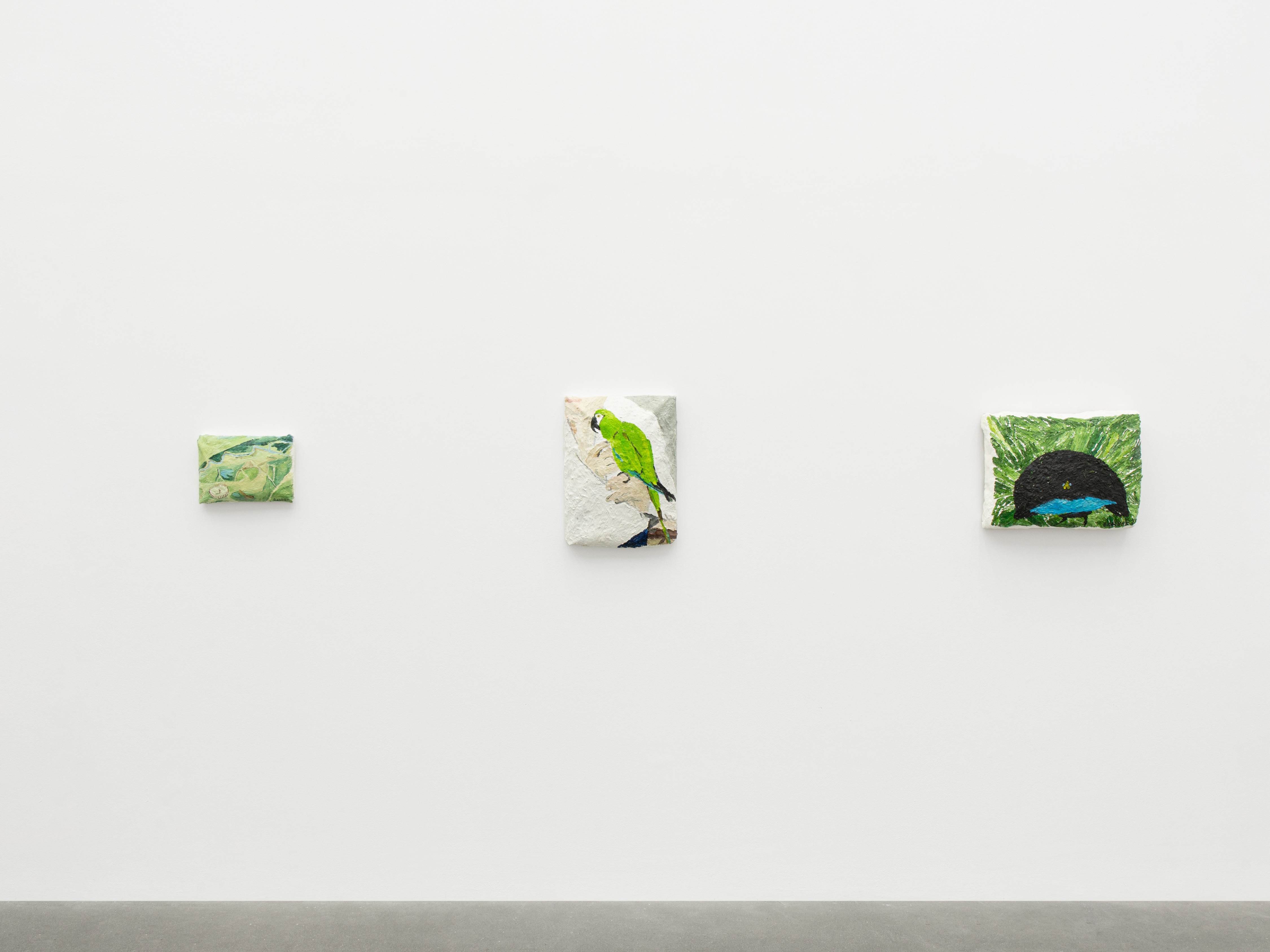 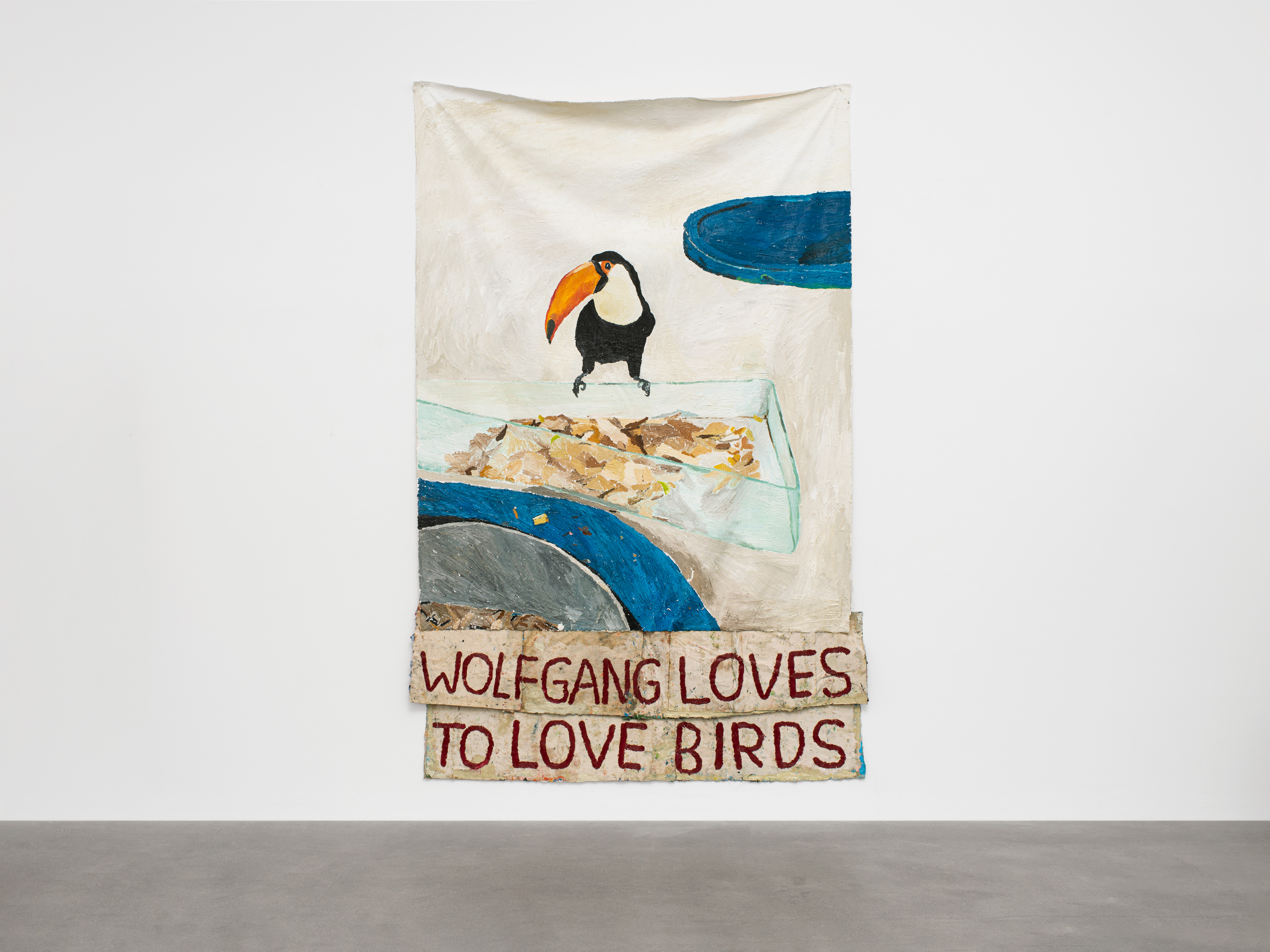 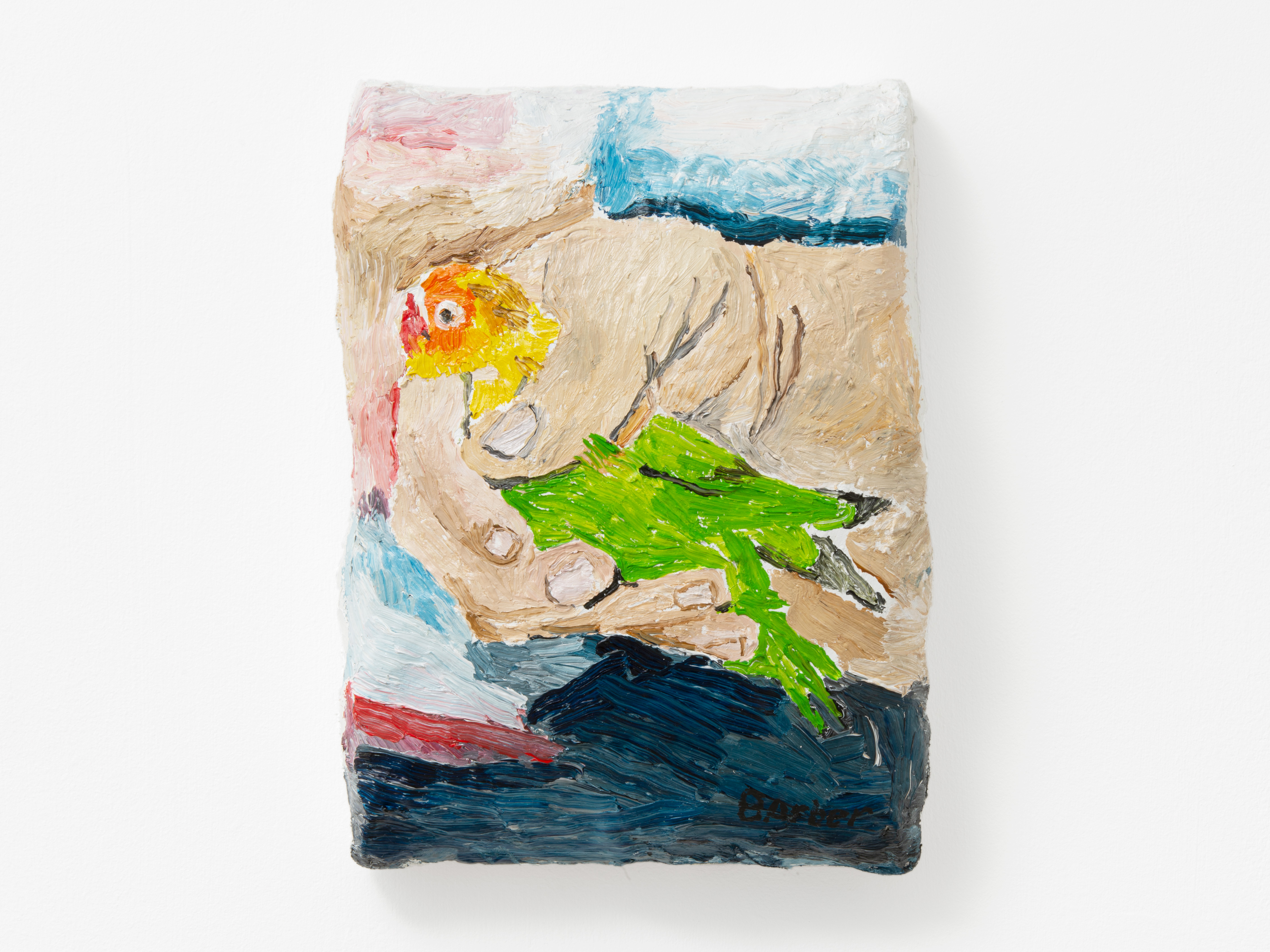 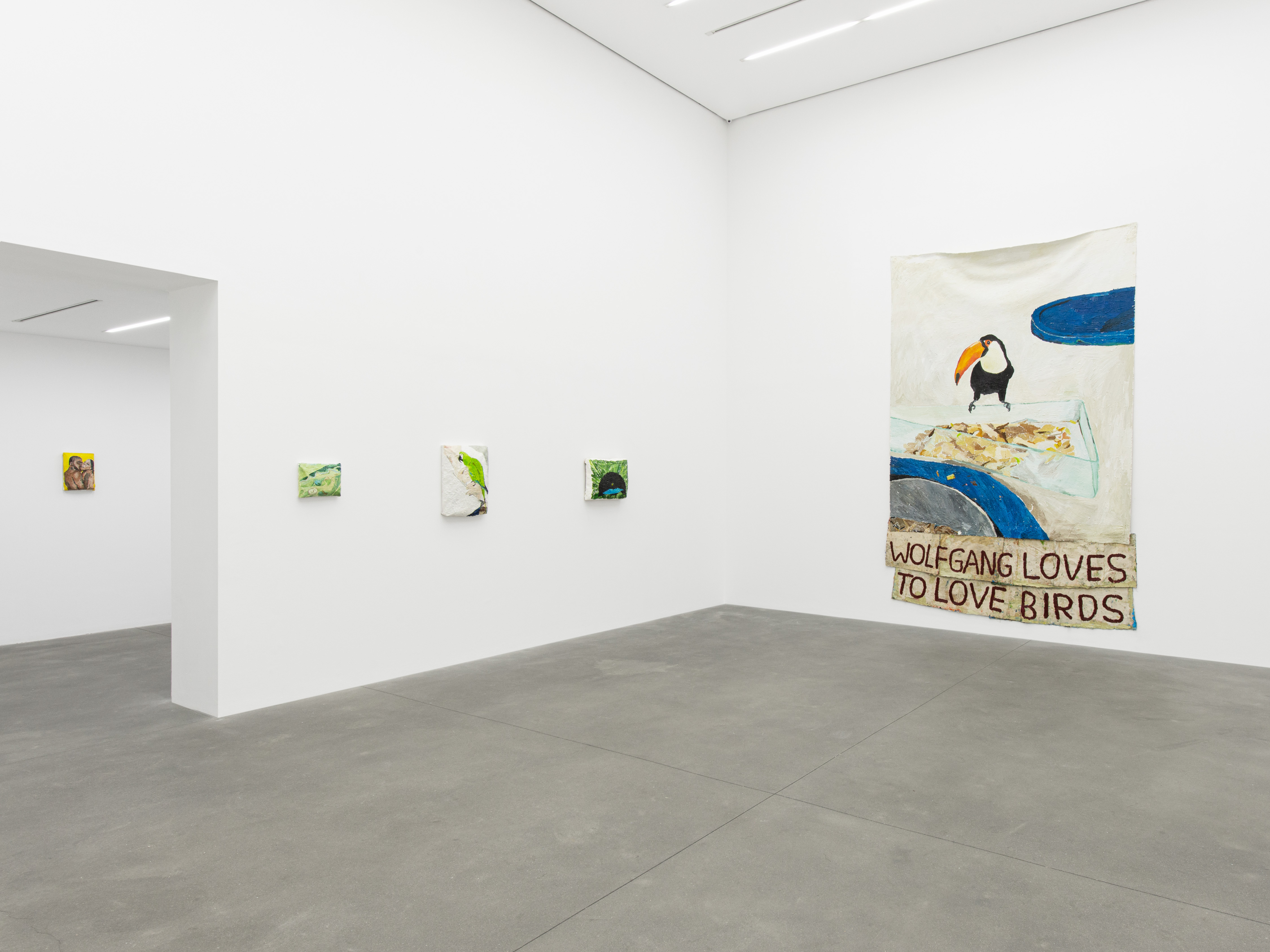 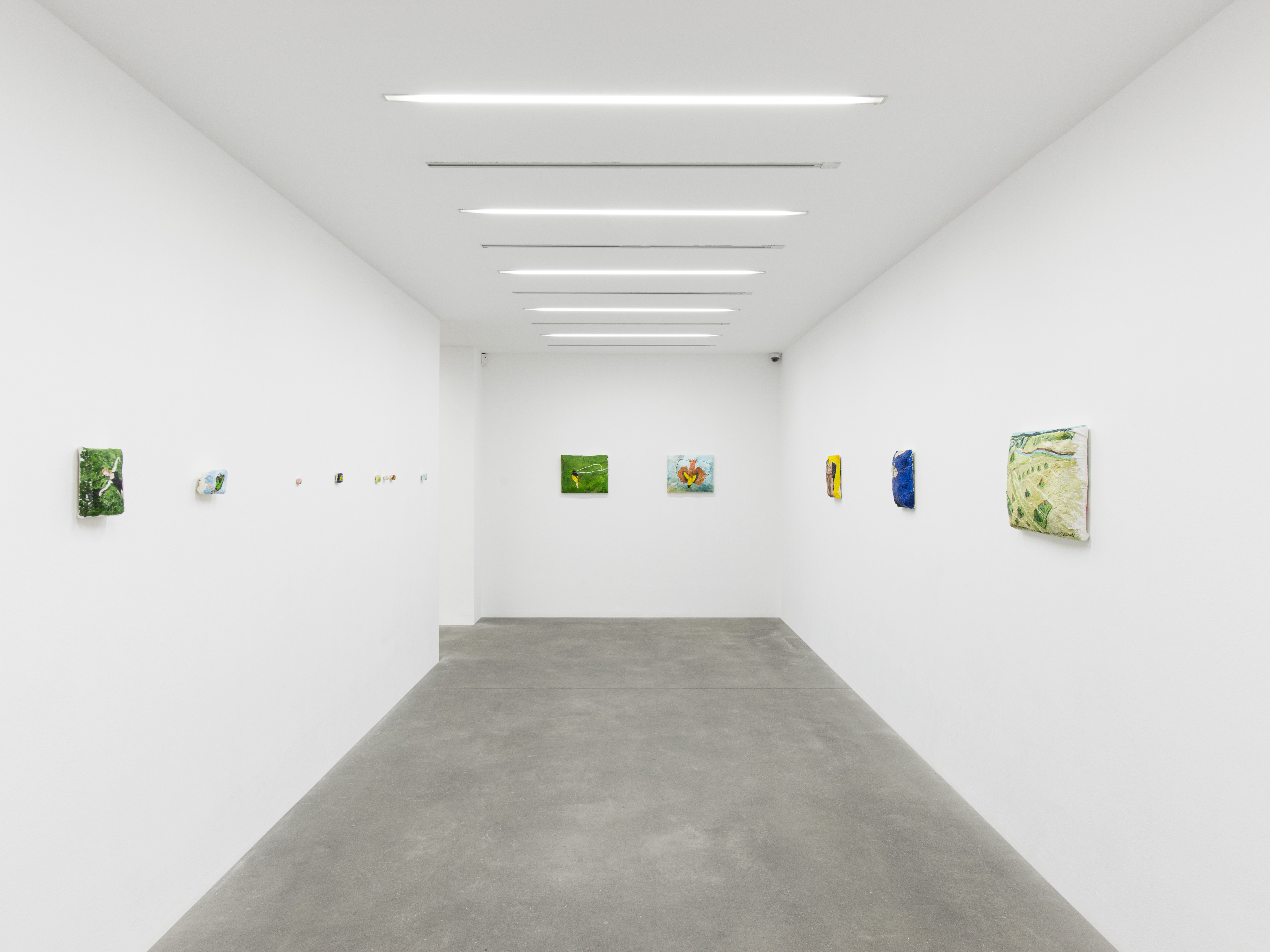 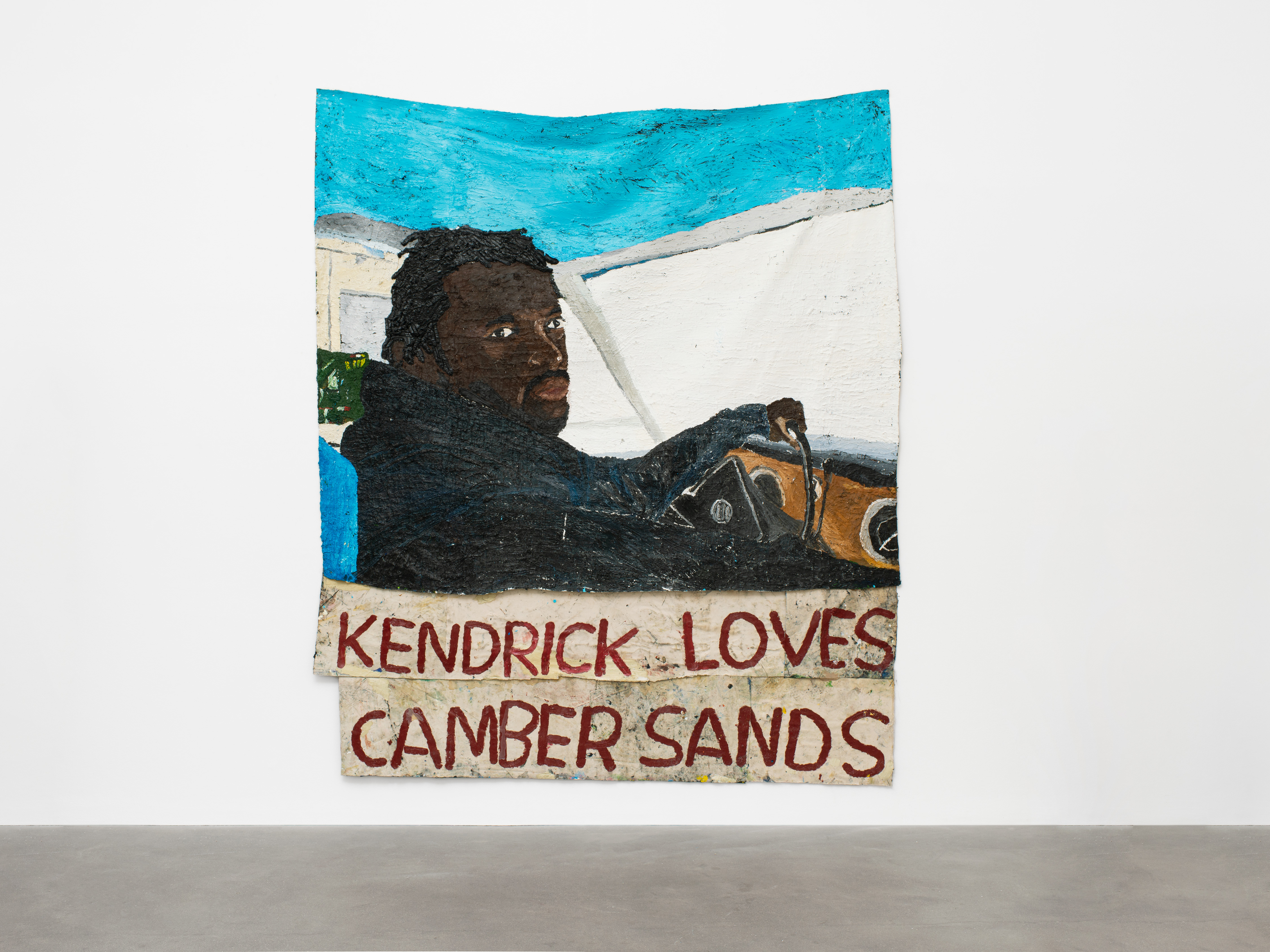