Faye Wei Wei’s exhibition Moon at Galerie Kandlhofer explores a nocturnal world of mythical and romantic figures composed with the artist’s distinctively fluid approach to iconography and classical myth, love rituals and the theatricality of gender and relationships. Within her practice, the works sometimes suggest the themes of particular mythic narratives, and at other moments seem to depart into a more ambiguous, interior space of incongruity and uncertainty. With a palette of earthy greens, reds, pale pinks and blues, Wei Wei's quixotic paintings are inhabited by magical, folkloric images of knights, horses, florals and dreamy heart-faced figures allowing the viewer to feel like you’re getting lost in the artist’s imagination.

The title of the exhibition relates to Wei Wei’s exhibition Sun in Tokyo, Japan at Isetan which is running concurrently alongside Moon in Vienna. Wei Wei conceived of the total body of work as two contrasting spheres, on two sides of the globe, connected yet conflicting. The works in Vienna relate to a more nocturnal vision both thematically and aesthetically, whereas in Sun, the works contain a lighter sense of the day. The body of work was born out of a period in the artist’s life where she was intensely focused on drawing as a means of artistic expression, as a result she returned to the painting process with an explicit desire to utilise the materials of painting in order to create the same intensity and intimacy of a small drawing.

‍
Moon as a whole draws inspiration from a particular segment of T.S Eliot’s poem The Waste Land (I. The Burial of the Dead, Stanza Two, Lines 17-24):

‍
“You gave me hyacinths first a year ago;
They called me the hyacinth girl.'
—Yet when we came back, late, from the Hyacinth garden,
Your arms full, and your hair wet, I could not
Speak, and my eyes failed, I was neither
Living nor dead, and I knew nothing,
Looking into the heart of light, the silence.
Od' und leer das Meer.”

‍
As a whole, the body of work deals with the tone of emotion Wei Wei garnered from the poem, that of the melancholy of wet dewy gardens and a sense of the in between, be it dusk, the present and the past or the physical and the spiritual. One of the works in the exhibition, ‘Two Lover’s in the Hyacinth Garden’ explicitly engages with Eliot’s poem depicting a male and a female figure surrounded by a mélange of florals and ribbons that merge into themselves and the figures, oscillating between figuration and abstraction. As with other works in the exhibition the composition of the figures within their surrounding creates a perception of a theatrical set,
an aspect which emphasises the manner in which Wei Wei heightens emotion within the works, presenting the sentiments in a pure, distilled form yet suspending before melodrama.

‍
In this new body of work, the motif of florals becomes a more dominant aspect of the paintings, bringing in a new relationship between the blooms and the figures. In this regard, in many of the works the florals seem to lean in to the human figures as if whispering something gently within their ear. Thus, within Wei Wei’s broader practice the florals have evolved into greater personification with many of the leaves and branches transforming into delicate hand gestures and the blooms themselves displaying independent character.

Furthermore, the works within Moon also engage in a more direct manner with art historical references, in particular the portraiture of the early Renaissance period. In this respect, the composition of the figures within works such as ‘Orchids flourished out of reach or for some reason not to be touched’ and ‘The flowers grew taller towards the sky in an effort to kiss the heavens’ are presented in the traditional bust portrait as was prominent in the work of Antonello da Messina and Titian, inspired by imported Flemish techniques from works such as Jan Van Eyck’s portrait of a ‘Man in a Red Chaperon’ (1433), during the late 15th and early 16th century popularity of portraiture in Venice. Alongside this, the tradition of the equestrian portrait is also explored within ‘The ocean is a flower, with waves pinched by the moon, the
ocean is a cloth, wrinkling the same spot same time every tide time’. In this piece Wei Wei reinterprets a traditional composition found in works such as Anthony Van Dyke’s, ‘Charles I (1600-1649) with M. de St Antoine’ (1633) with a central figure on a horse pushed into the foreground by a dominant archway. However, where in previous iterations of this motif the human figure was the protagonist, within Wei Wei’s work the horse itself takes on this mantel. Further influences can be found in the palette and figuration of artists such as Piero della Francesca and Fra Angelico whose demure and lilting figures found an enduring fascination for Wei Wei. 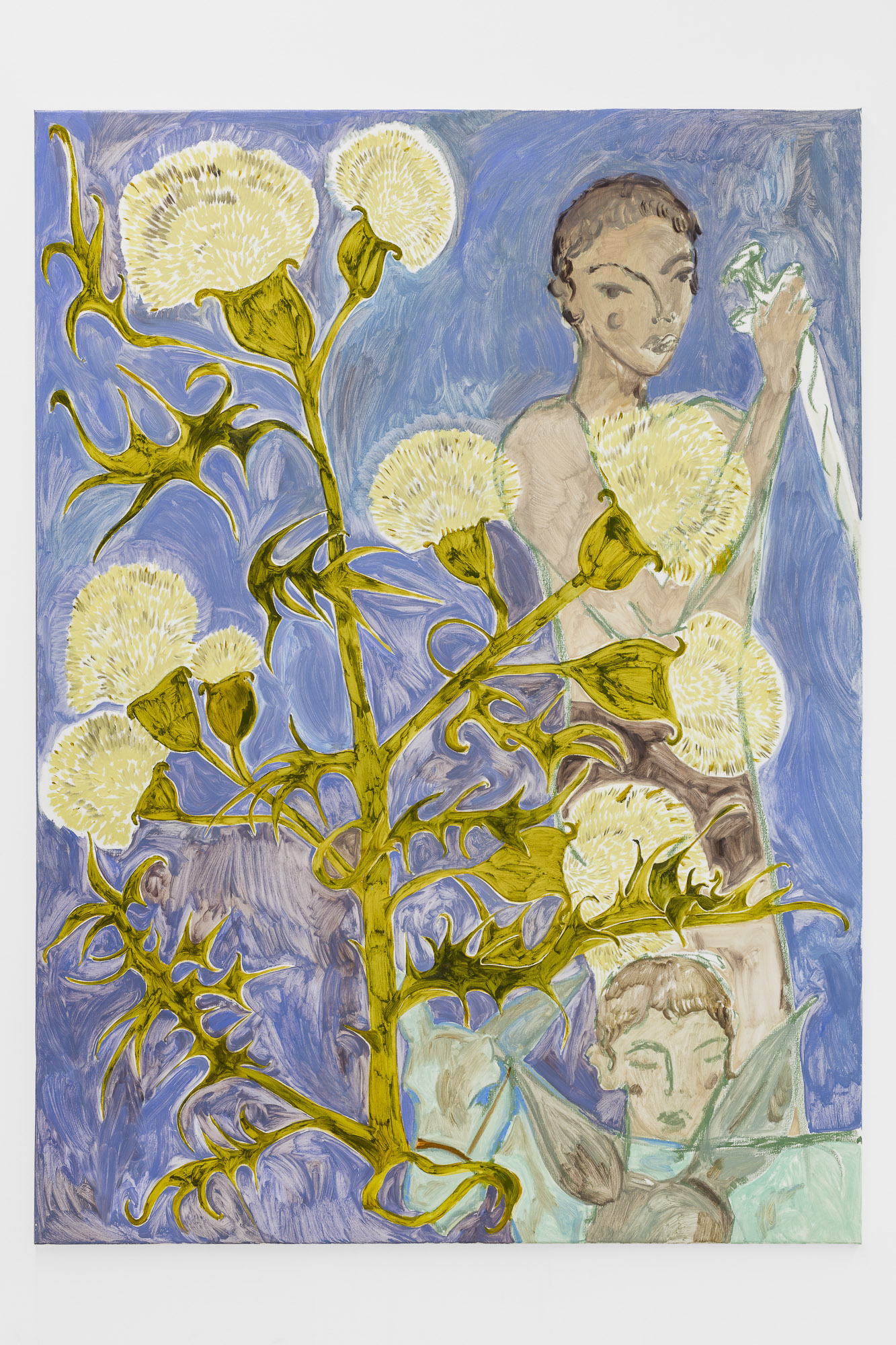 Faye Wei Wei A play of stars is about to begin, your eyes twinkle with every blink they are morning dew, they are starlight trapped in the well, 2021 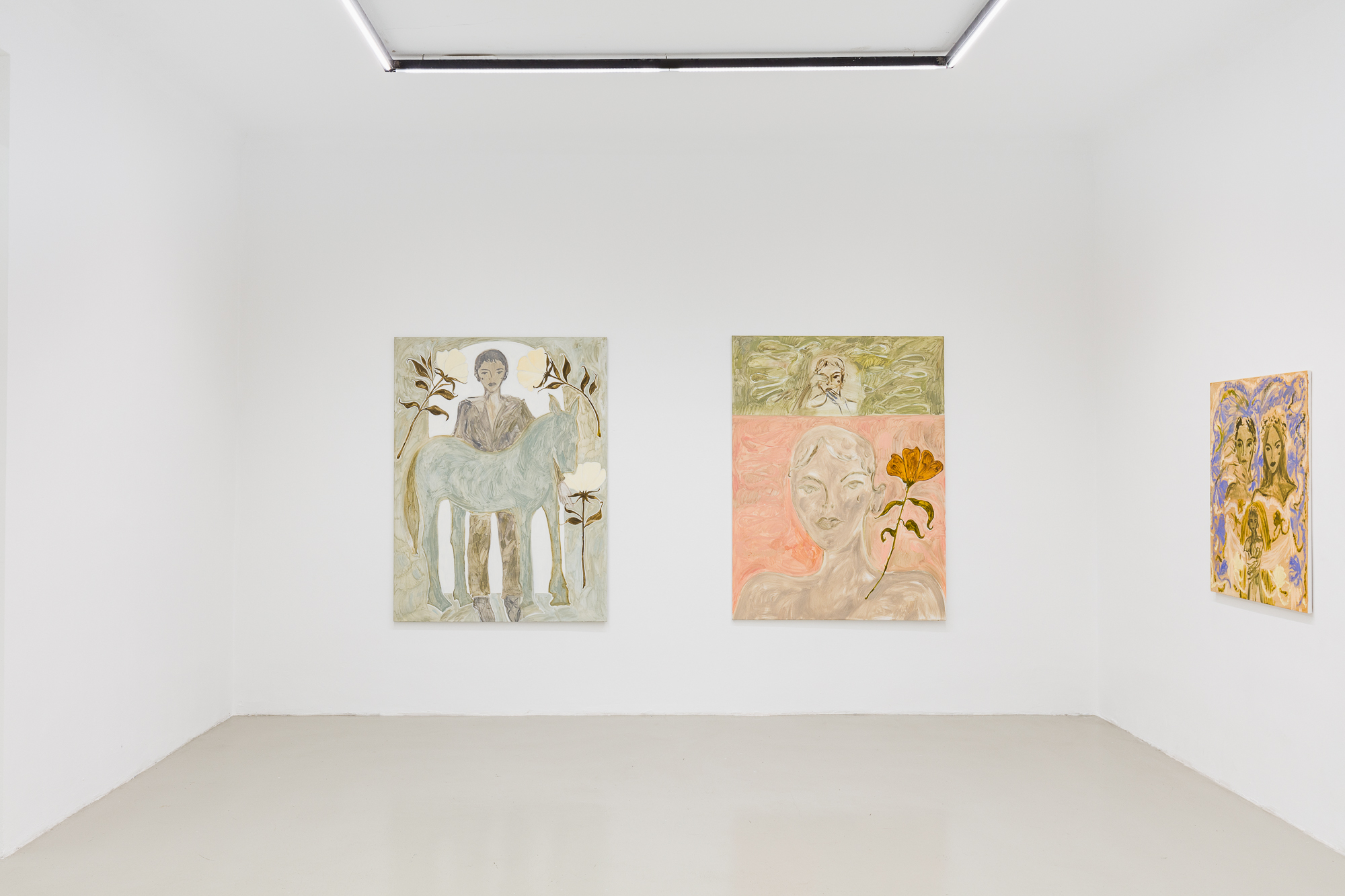 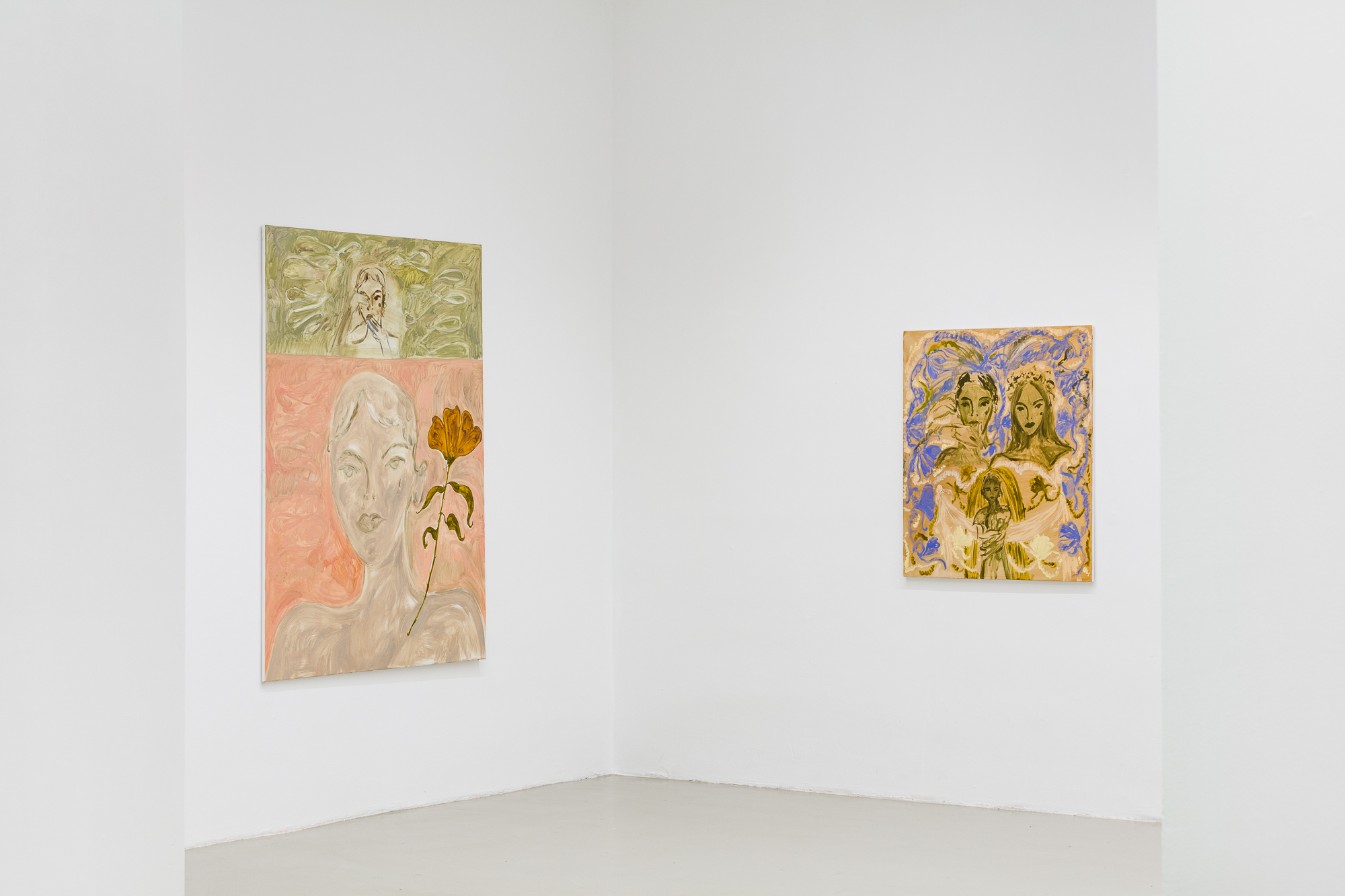 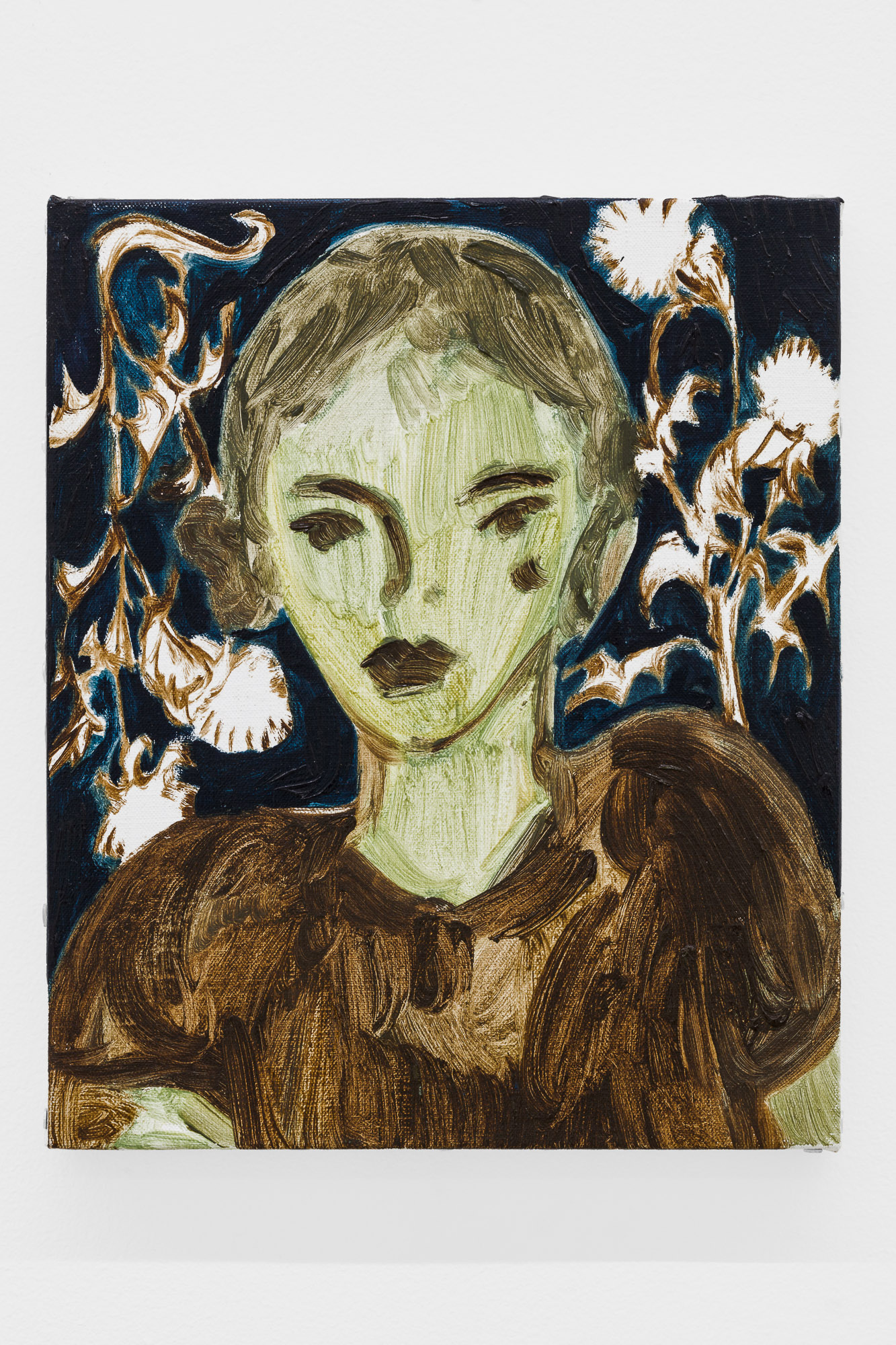 Faye Wei Wei Snowdrops suffocating for air, under warm clay mud, sprouting out like a diver in reverse , 2020 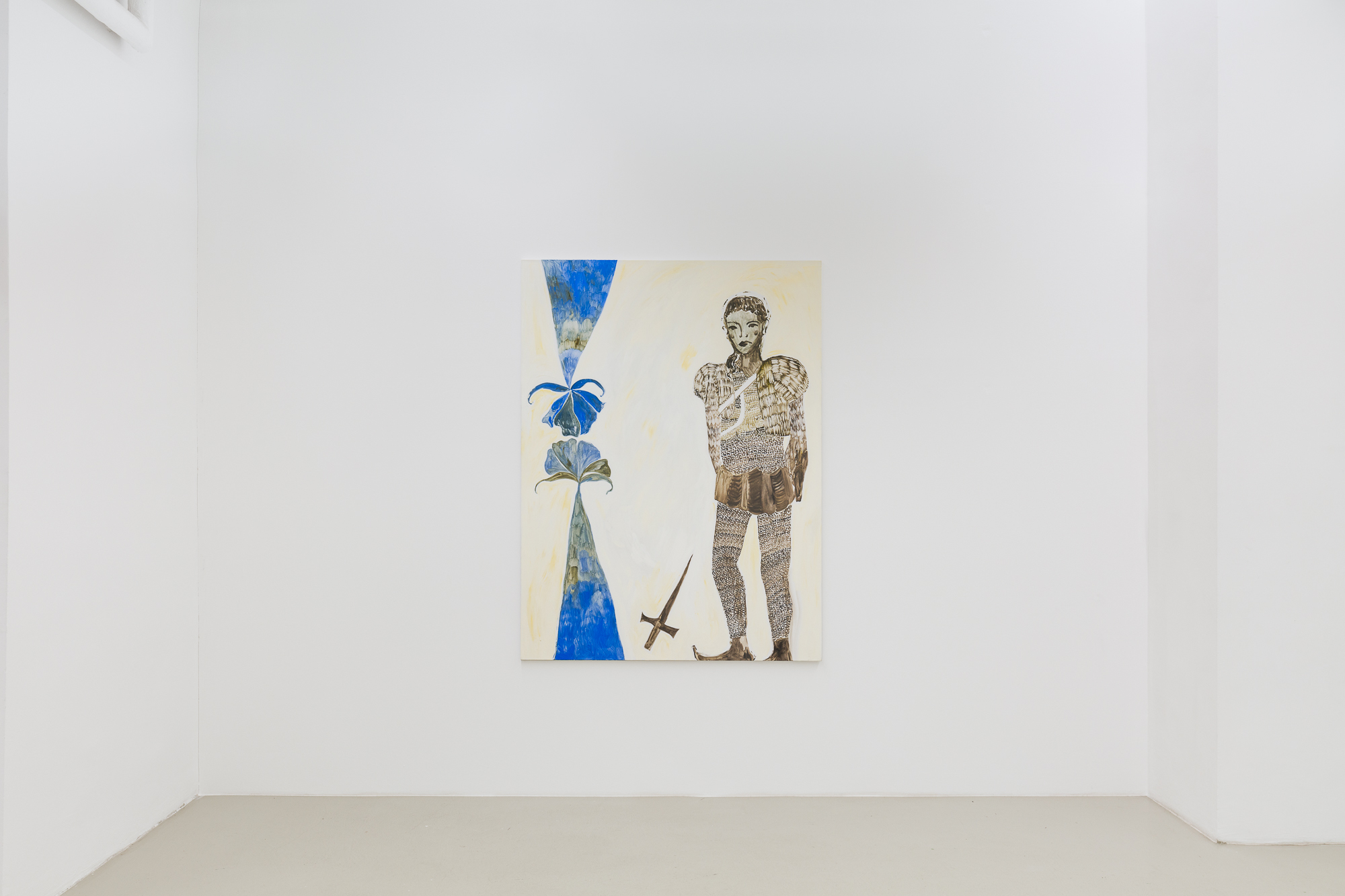 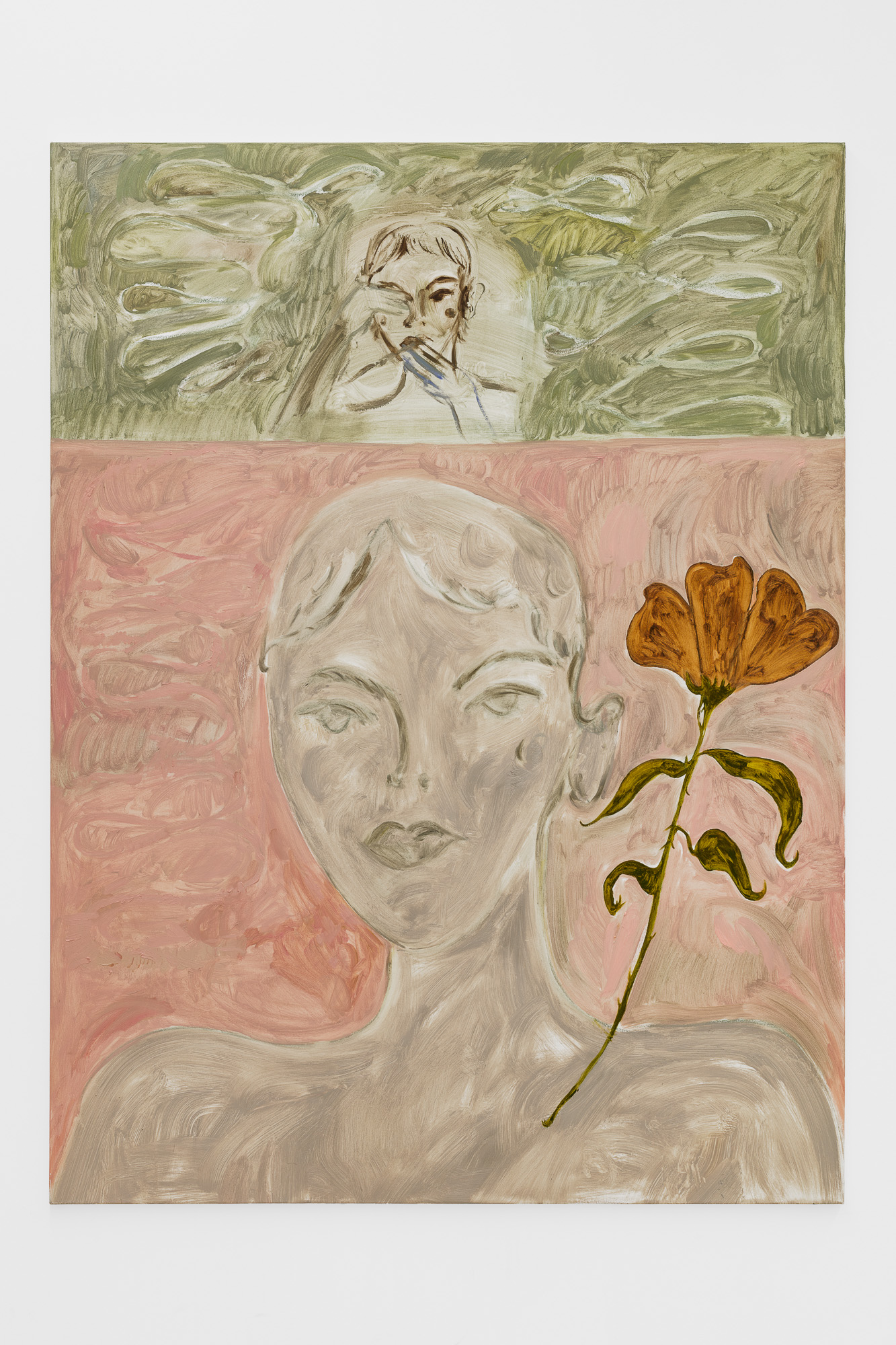 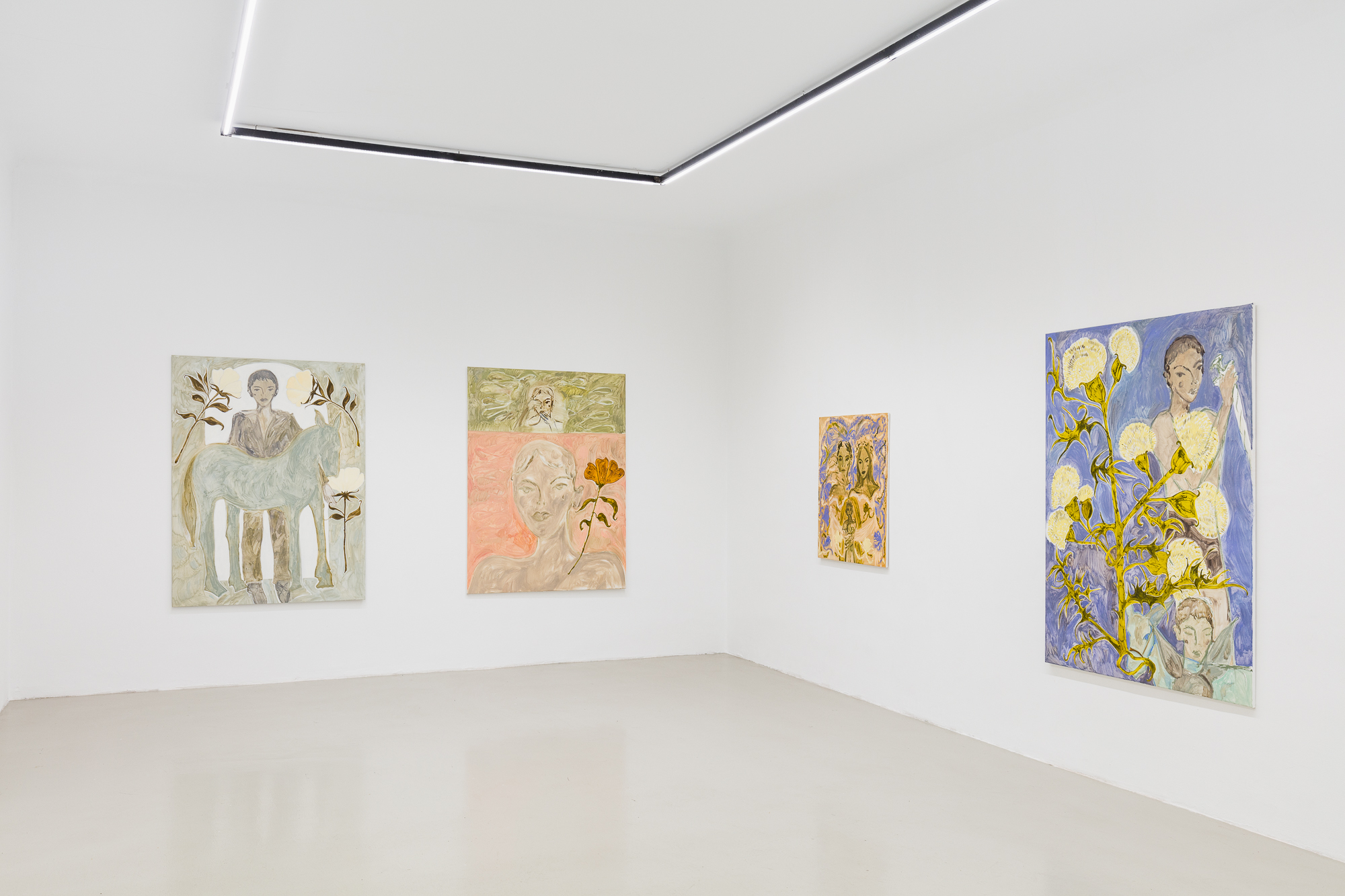 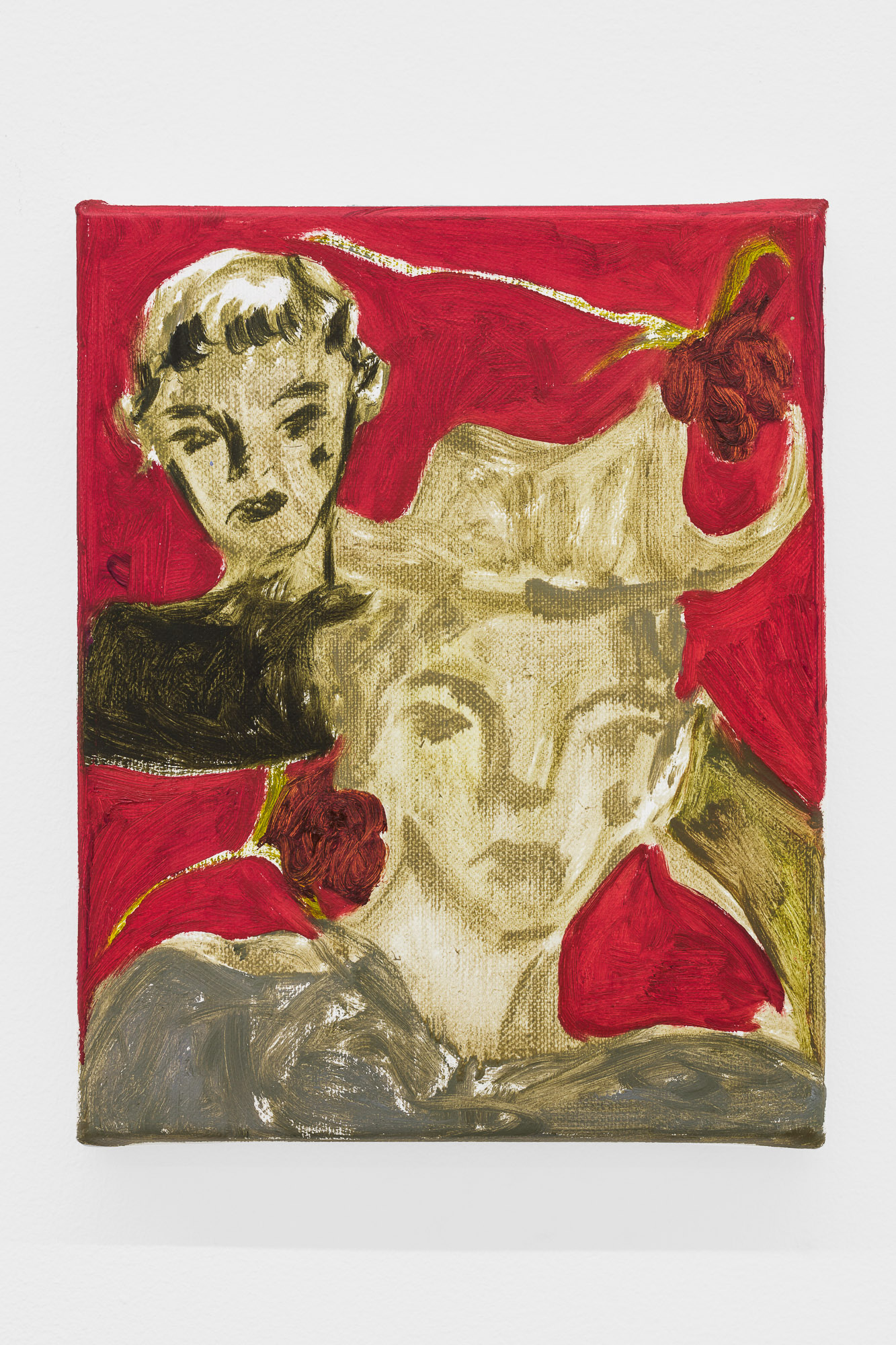