The Distillation of Color

New York – Pace Gallery is pleased to present a monographic exhibition dedicated to the paintings of Agnes Martin, whose work left an indelible mark on the history of modern and contemporary art and has continued to inspire generations of artists. For Martin, painting was defined by an ongoing exploration of its capacity to express a vision of beauty born of intuitive inspiration. Featuring a range of paintings from the 1970s to the early 1990s, from Martin’s multicolored striped works, to compositions of color-washed bands defined by hand-drawn lines, to the deep gray Black Paintings that characterized her work in the late 1980s, this exhibition examines Martin’s attentive use of colorin each of these phases. Agnes Martin: The Distillation of Color traces this evolution within the context of Martin’s broadening vision during the latter half of her career—one that crystalized her pursuit of perfection and quest to deepen her understanding of painting’s essence, unattached to emotion or subject, yet radiant and meditative in itspure abstraction.

CEO and President Marc Glimcher says: “In 1973, Agnes Martin returned from a five-and-a-half year hiatus from art making. Her dedication to rigorous abstraction which sought to isolate platonic truth and essential beauty, had run headlong into the vagaries of theNew York art world of that storied decade. The results of her retreat to New Mexico and her self-imposed isolation was a new body of work embracing color, while loosening her adherence to the grid. This joyful reinvention of her process, which is explored with our exhibition in New York, would continue for the next nineteen years. Spent mostly in the hills outside of Galisteo, Martin would refine her quest for beauty through the distillation of color as the paintings moved from pink, yellow and blue to gray and white.”

Martin’s preoccupation with awareness—of herself, the world around her, and painting itself—is evident in the transitions she made in her work in the years following a five-year break from her studio which began in 1967.During this period, Martin left New York permanently, travelled across Canada and the United States, and eventually returned to New Mexico. Reflecting on this time in 1993, she remarked, “Sometimes nature calls you and says, ‘come live with me’. So I decided to experiment with the simple life.” When she returned to painting in 1972 after settling in Galisteo, New Mexico, she began to paint gessoed canvases in pale washes of primary colors, first in vertical bands, and later in horizontal bands. Martin’s pursuit of themes of beauty, happiness, and innocence in her non-objective art during this time was tied to her reverence of the open and expansive landscape that surrounded her. However, rather than depict this beauty through representation, Martin was interested in replicating her profound experience of its quiet solitude through abstract expression.

Beginning in 1980, Martin’s compositions began to feature narrow horizontal bands in trios of primary hues, thinly painted in translucent shades of pink, blue, and yellow. These works, which she sometimes referred to as ‘candy stripe’ paintings, exude Martin’s quest for beauty in the rhythmic presence of undulating color. Other notable series of works during this time feature color field washes in alternating primary pastel colors or tones of single shades that offer the sense of open but defined space within horizontal graphite lines. Exemplifying an expansion in Martin’s approach to color, these works suggest Martin’s interest in new possibilities of perception and experience, toward a purity of expression.

By 1983 Martin returned her focus to gray, distilling an approach to color grounded in the modesty of tonal shades—each a color in its own right. These works capture Martin’s continuous study of the phenomenological capacity of painting, exemplified in the otherworldly sense of light that emerges in each composition. During the late 1980s,Martin began a series of dark gray paintings, which she referred to as her Black Paintings. These works, composed of deep hues of rich and steely gray in variant intensities, are demarcated by contrasting shades of broad and thin bands. In contrast to her pale gray canvases, the Black Paintings convey a preternatural sense of gravity. To create the distinctly flat surfaces of these paintings, Martin mixed each dark gray tone with gesso paint to absorb light, offering a metaphysical sense of space and depth. Martin’s second near decade-long period exploring the subtleties of tone and texture in diaphanous gray and white compositions was only interrupted in 1992 by two multicolor striped paintings, which foreshadow her departure from her gray paintings and return to the exuberance of color that defined her work from 1994 until her death in 2004.

On the occasion of Agnes Martin: The Distillation of Color, Pace Publishing will produce an exhibition catalogue that will feature new editorial contributions by a selection of writers whose cross-genre works span art writing, essay, and memoir. Engaging with the themes of the exhibition, the texts will explore Martin’s work and her effect on broader culture through a contemporary perspective. Expanding an approach to Martin’s paintings beyond a purely art historical lens, this book will bring new voices into the conversations around her career, inviting a rediscovery of her enduring legacy.

This solo exhibition marks Martin’s 28th with Pace since the artist’s first presentation with the gallery in 1975.Martin’s five-decade long relationship with Pace Founder Arne Glimcher, as both the artist’s dealer and friend, was one of mutual admiration and respect and played an instrumental role in Martin’s lifetime. Agnes Martin: Paintings,Writings, Remembrances—a beautiful collection of the artist’s most important art works by Arne Glimcher is being reprinted by Phaidon and will be released in September 2021. The book, originally published in 2012, includes Martin’s writings on her philosophies on art and on the themes of life that inspire her paintings alongside an introduction by Glimcher and notes on visits he made to Martin’s studio and home in New Mexico. 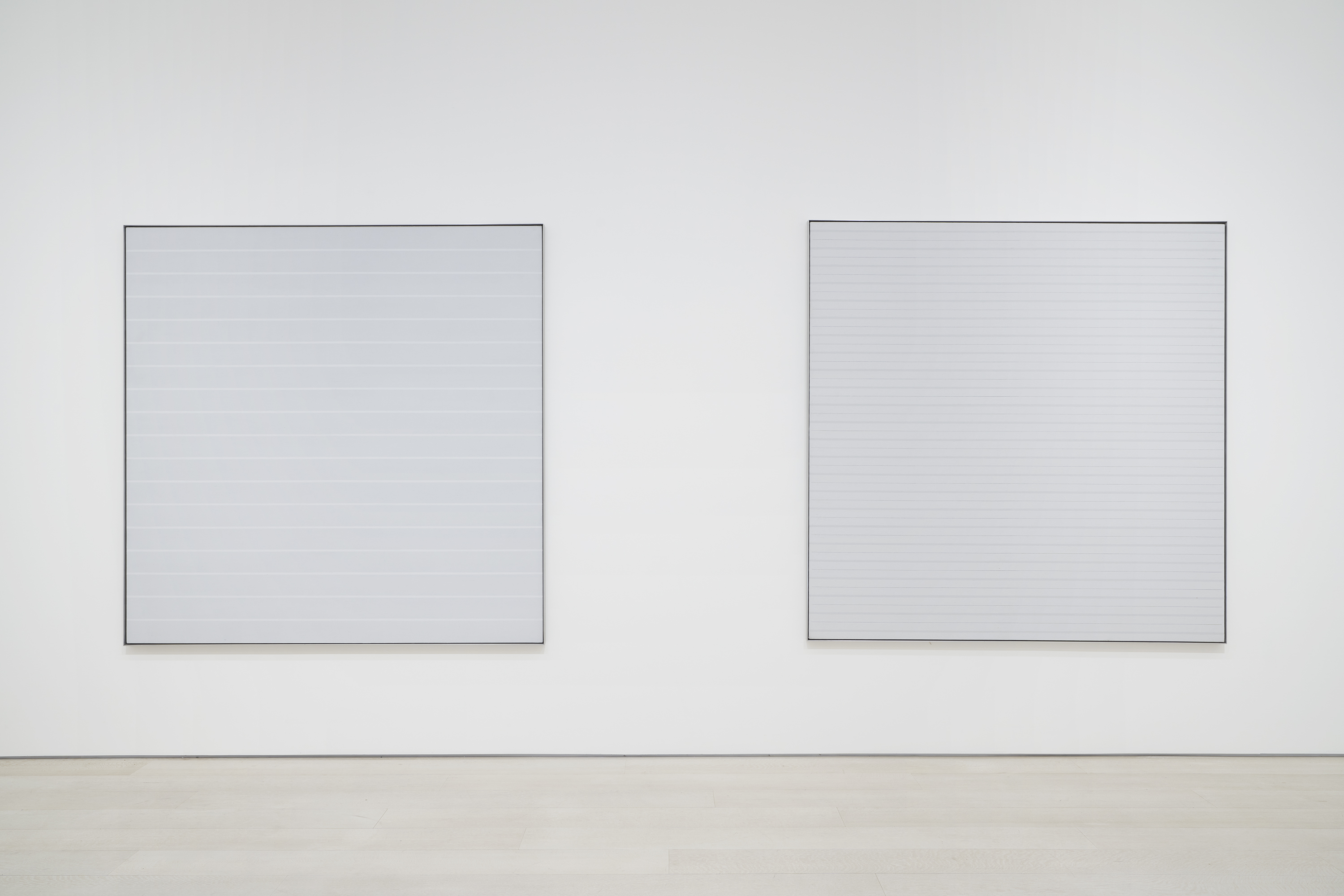 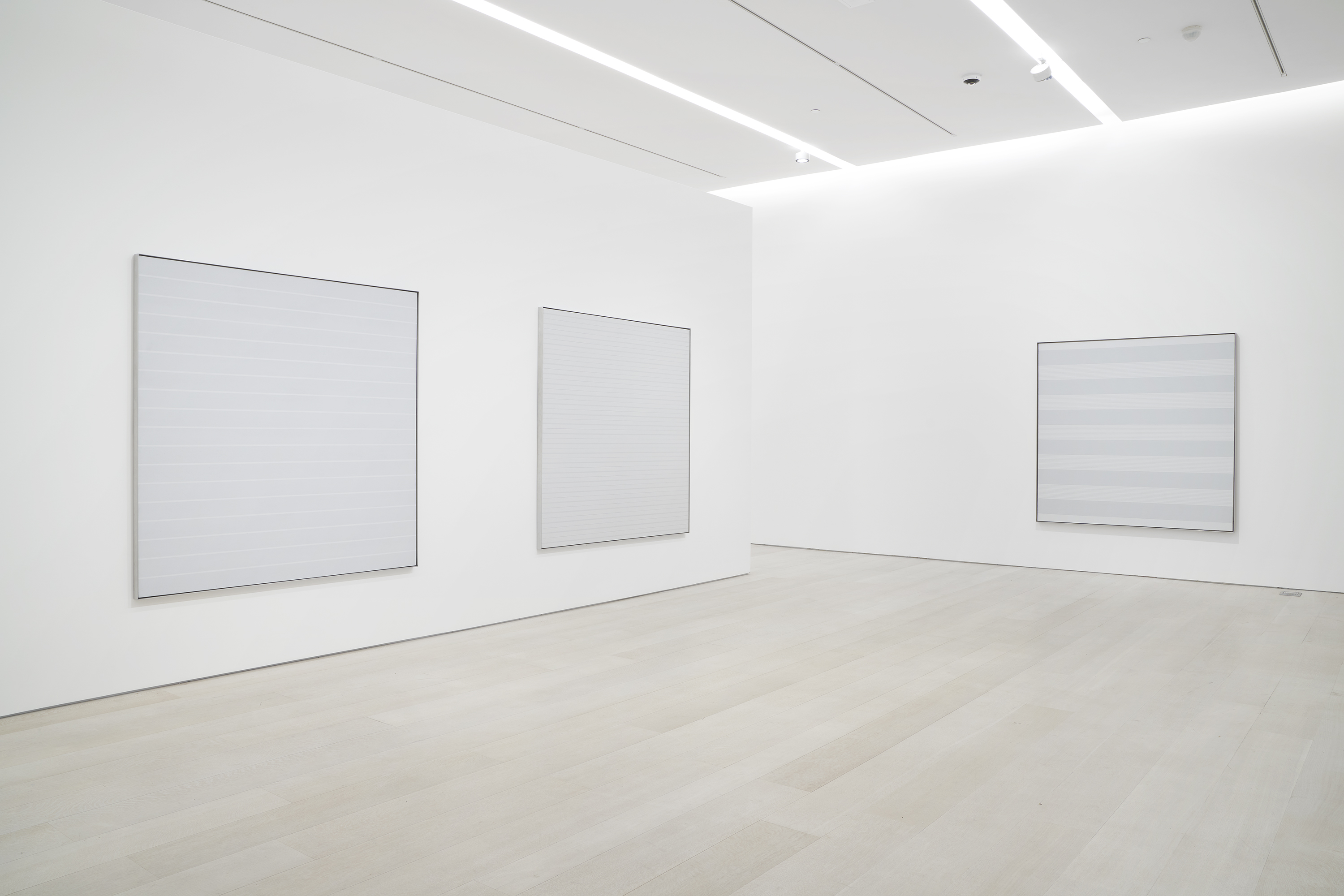 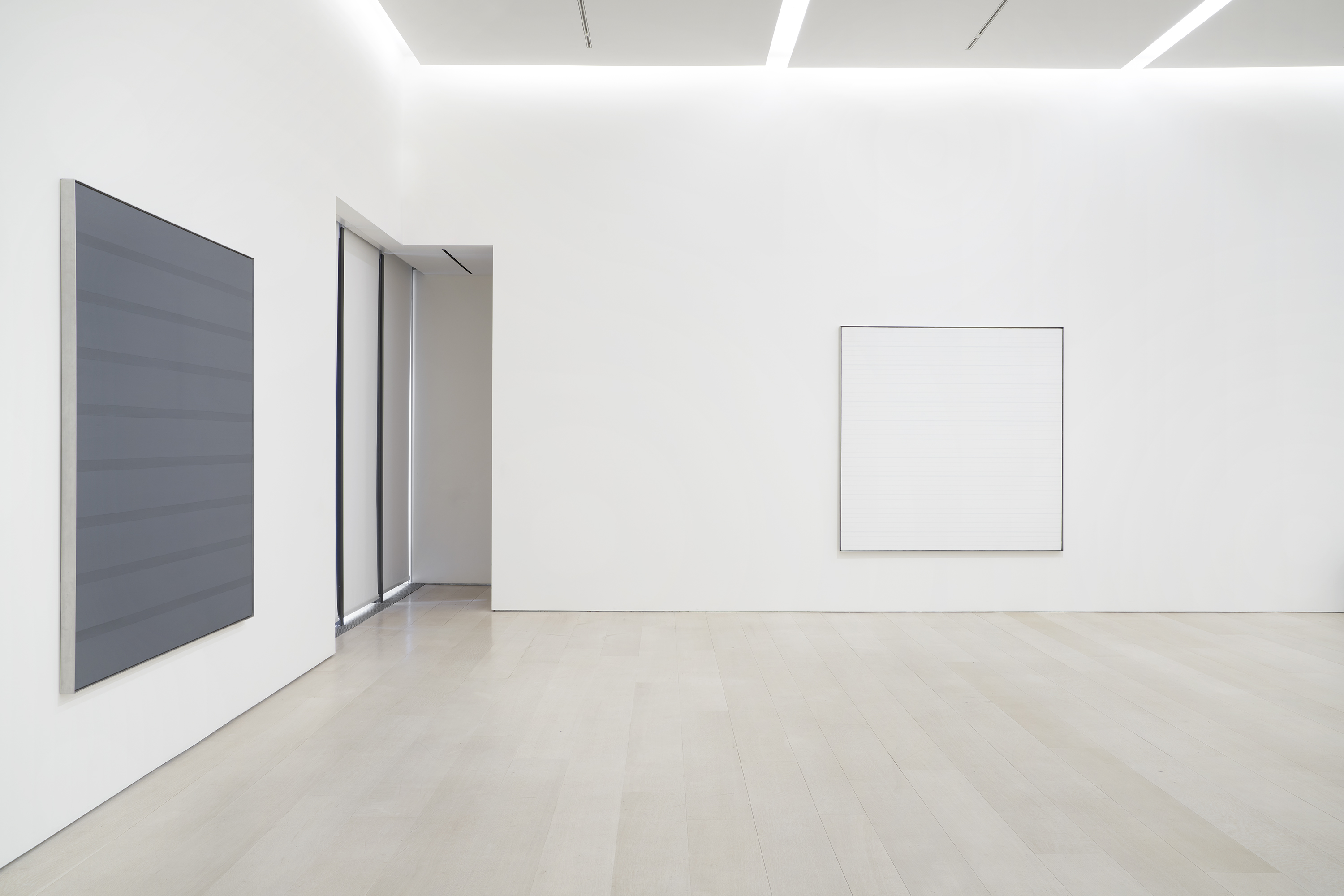 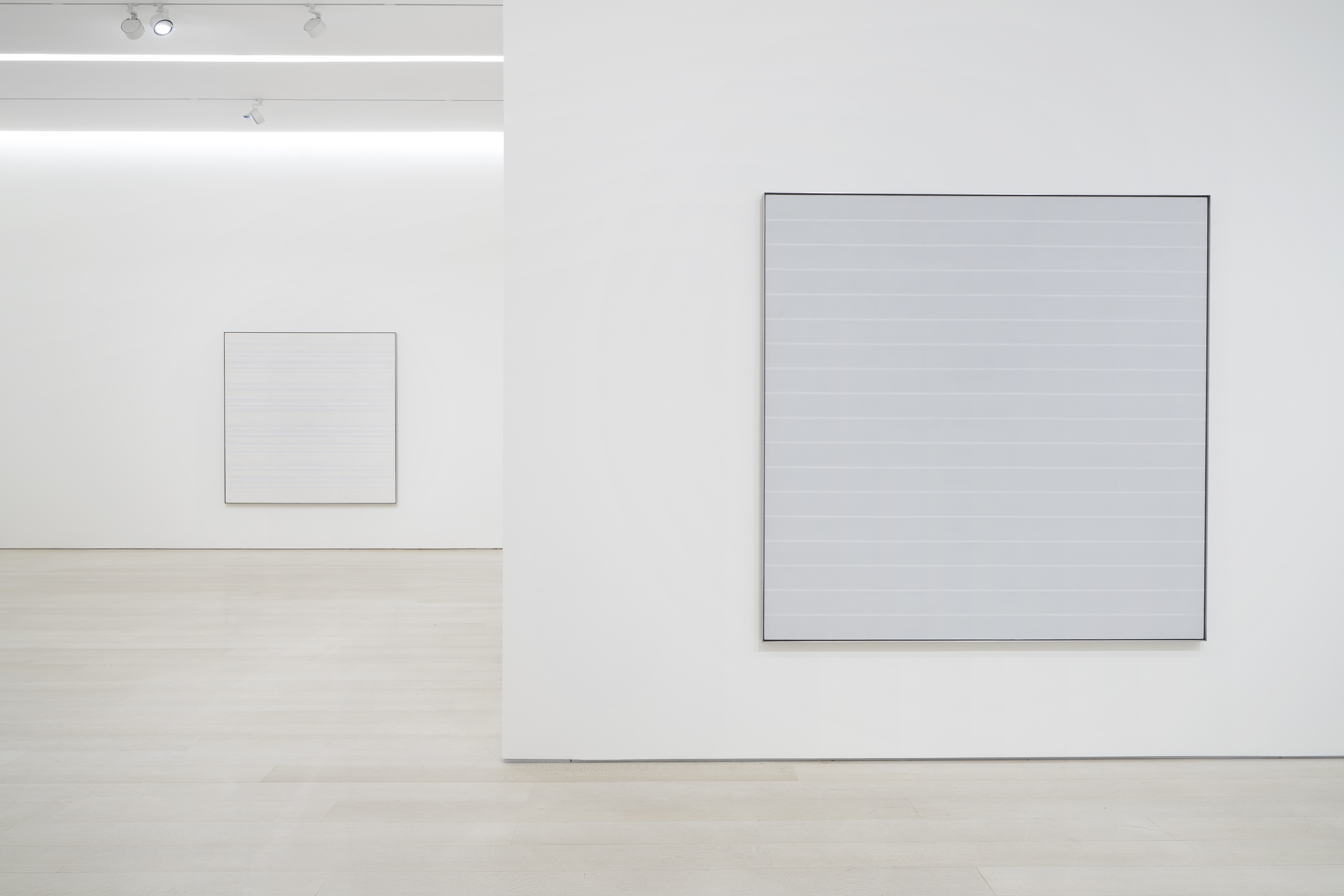 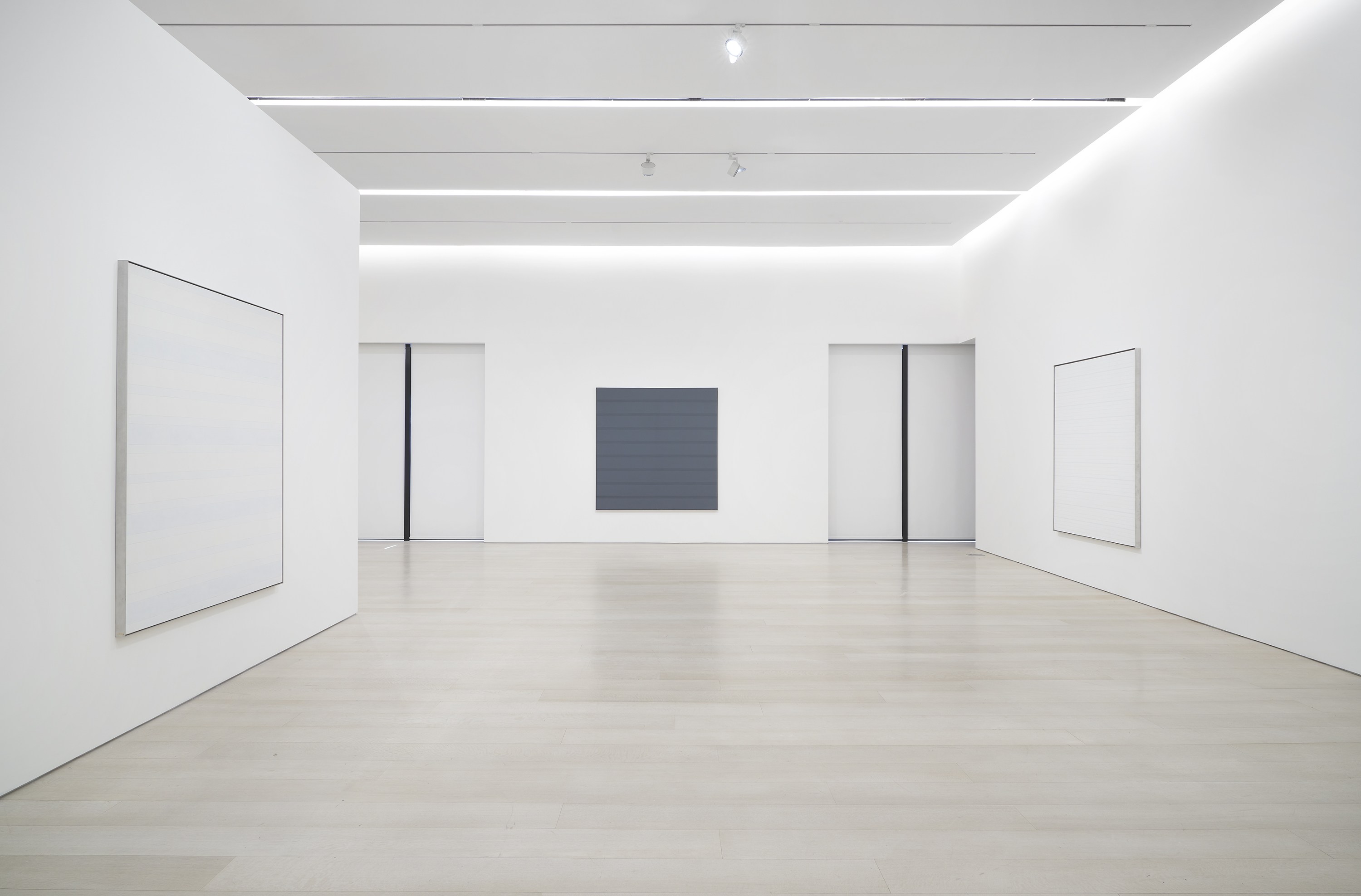 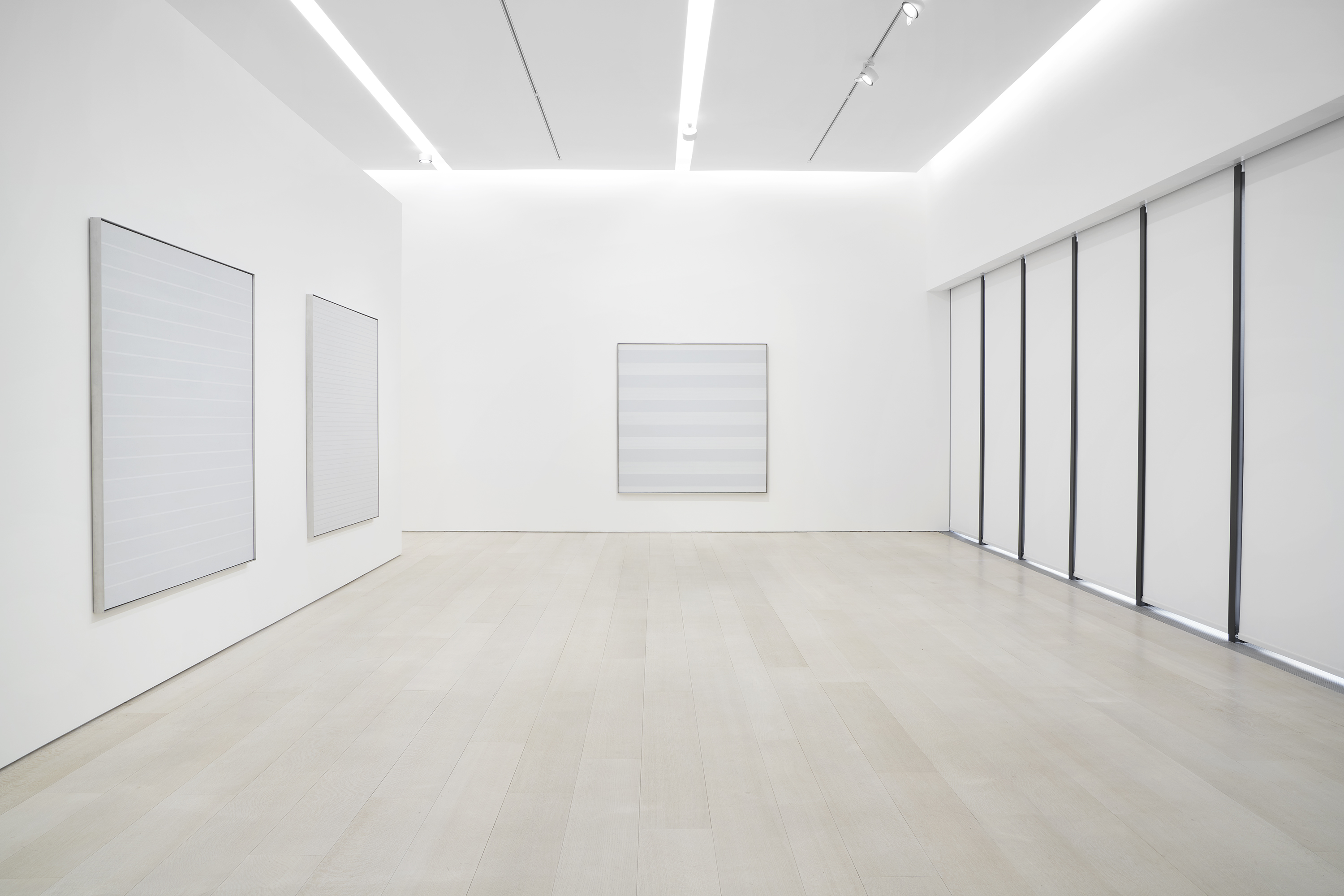