“I’ve previously said that my work was about turning the mirror onto society—as perhaps seen in the titles manifestation or news. But in these works, for the first time and in a very fluid and clear way, I am turning that mirror onto myself.”
—Oscar Murillo

The exhibition will feature large-scale canvases that extend two of the artist’s ongoing series, manifestation and news, both begun in 2018. In these works, Murillo pushes his own practice in new directions as a way to, in the artist’s words, “keep a balance between my desire to think primarily about image-making and mark-making, textures and form, and this constant awareness of the world and my need to interpret it.”

Murillo’s psychologically charged paintings are imbued with a spiritual resonance and bodily presence; they shift between the symbolic and the physical, the personal and the political, the surface and what lies beneath. He often begins by sewing together his support using an array of material fragments, including deeply saturated pieces cut up from existing canvases. Through the physical acts of stitching the extant into the new, combining them with other materials, and covering each surface with paint, Murillo catalyzes a powerful transfer of energy that traverses the history and strata of his own studio practice.

In the manifestation and news paintings, Murillo mines the many ways in which ideas, words, and even everyday items are displaced, circulated, and increasingly intermingled. The word “manifestation” itself encompasses a multitude of definitions, and notably is used in several languages to describe the act of political demonstration. Murillo directly links physical artistic gesture to the use of one’s body to proclaim dissent in the face of power. Layered elements—colorful bars of raw oil stick, ivory black paint, screen-printed imagery, and spray paint—jostle for recognition, visualizing the ongoing struggle between the conscious and unconscious selves, as well as the pressures that act both inside and upon the body.
‍

The title of this exhibition is drawn from Emily Dickinson’s 1862 poem that opens, “One need not be a Chamber—to be Haunted—.” Responding to this literary idea of a specter within the self, in these massive canvases Murillo sets vivid hues against jagged passages of black, conveying a visceral and almost corporeal turmoil.

Presented in tandem with the exhibition is an exclusive online viewing room featuring new works on paper by the artist.

Born in Colombia and based in various locations, Oscar Murillo (b. 1986) earned his BFA in 2007 from the University of Westminster, London, followed by his MFA in 2012 from the Royal College of Art, London. He joined David Zwirner in 2013 and had his inaugural exhibition, titled A Mercantile Novel, at the gallery in New York the following year. binary function marked his first solo presentation at David Zwirner London in 2015. In 2016, the New York gallery presented through patches of corn, wheat and mud, a solo exhibition of the artist’s new work. the build-up of content and information, presented at David Zwirner’s Hong Kong gallery in 2018, was the artist’s first solo show in Asia. In 2019, Manifestation was held at the gallery’s London location. In 2020, News was on view at the gallery’s Paris location. Ourself behind ourself concealed is the artist’s seventh solo exhibition with the gallery, and his third in New York.

Currents 121: Oscar Murillo is on view at the Saint Louis Art Museum through August 28, 2022. Beginning September 17, 2022, a solo exhibition of Murillo’s work, A Storm Is Blowing from Paradise, will be on view at the Scuola Grande della Misericordia in Venice.

For Murillo’s ongoing long-term project Frequencies, created by the artist and implemented with studio collaborators, members of his family, and local practitioners around the world, canvases are temporarily affixed to classroom desks in selected schools across the globe, encouraging students aged ten to sixteen to create any kind of mark making—drawing, writing, doodling. Frequencies was exhibited at the 56th Venice Biennale: All the World’s Futures in 2015. The following year, in 2016, it was presented at the 2nd Hangzhou Triennial of Fiber Art in China and the 3rd Aichi Triennial, Homo Faber: A Rainbow Caravan in Japan. In 2017, it was exhibited as part of Murillo’s Capsule 07 exhibition at Haus der Kunst in Munich and as part of the group shows A Poet*hical Wager at the Museum of Contemporary Art Cleveland and Fragile State at the PinchukArtCentre in Kiev. In 2019, the project had a dedicated exhibition at Yorkshire Sculpture Park, UK. In 2021, the project was presented as part of The Space Between Classrooms, an exhibition curated by Alia Farid at the Swiss Institute in New York; MAM Project 029: Oscar Murillo, Mori Art Museum, Tokyo; Desert X 2021 in the Coachella Valley, California; and Aesthetics at TANK Shanghai. A presentation of Frequencies, organized by Artangel, was on display at the Cardinal Pole Catholic School, London, in 2021. 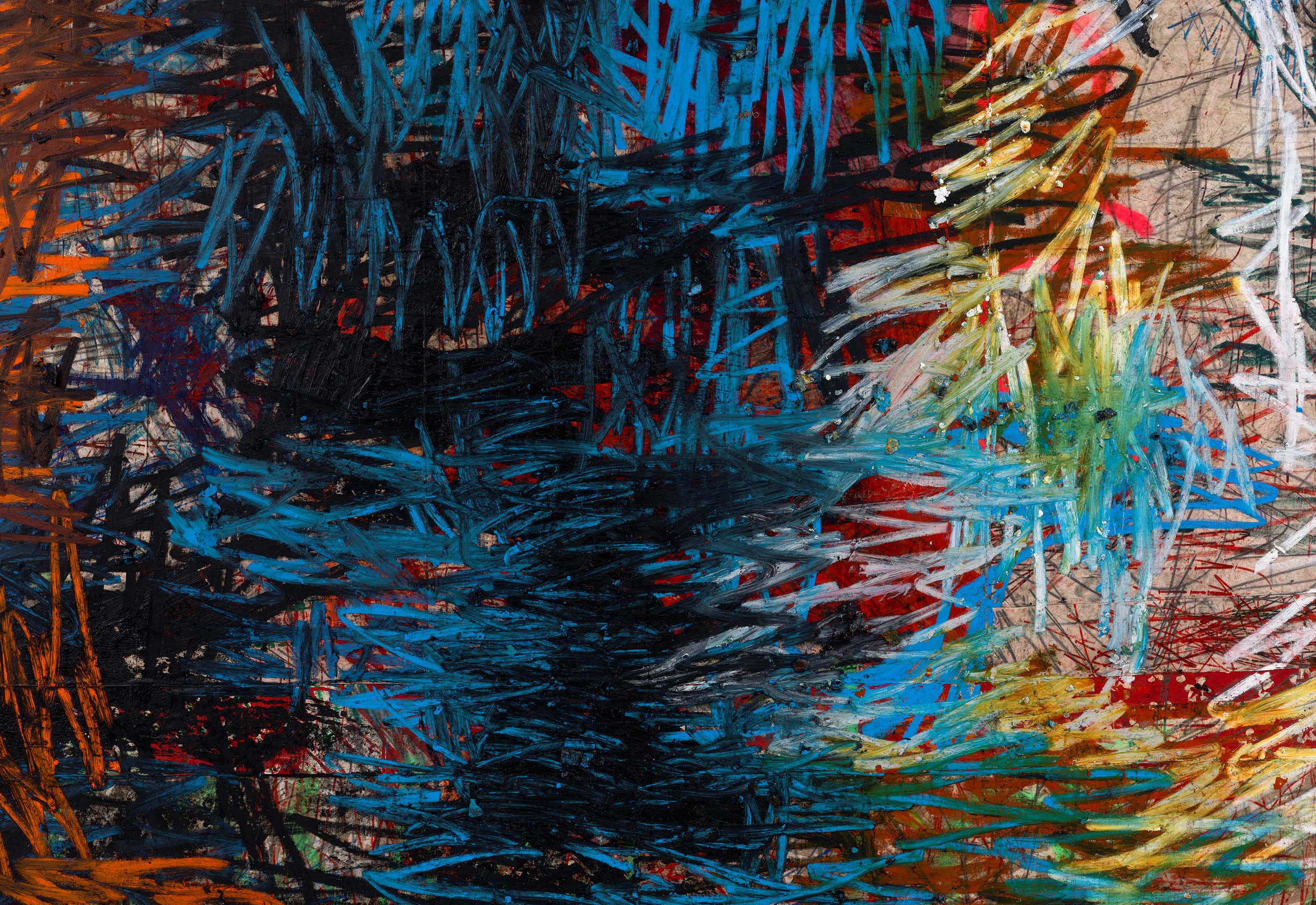 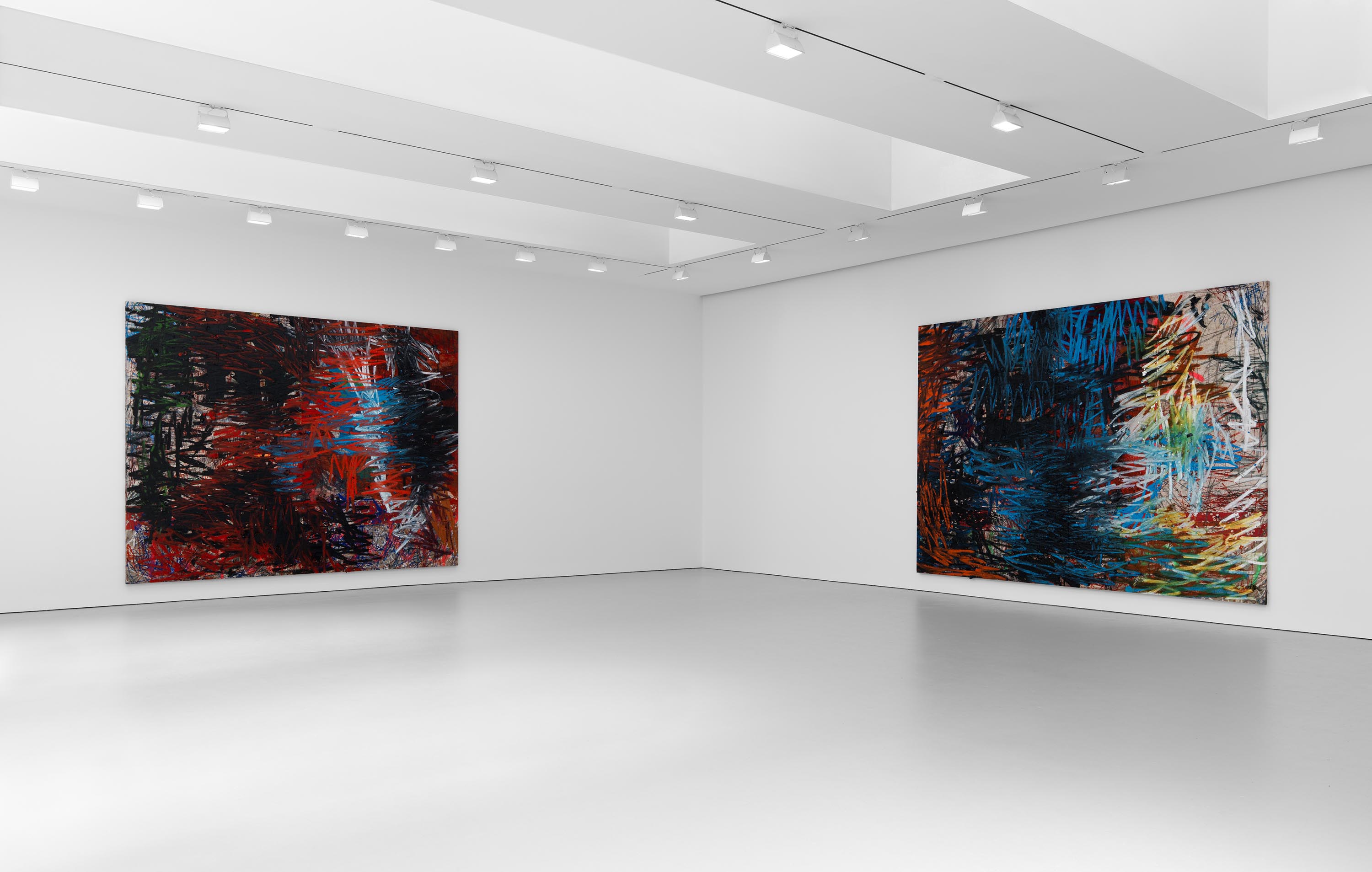 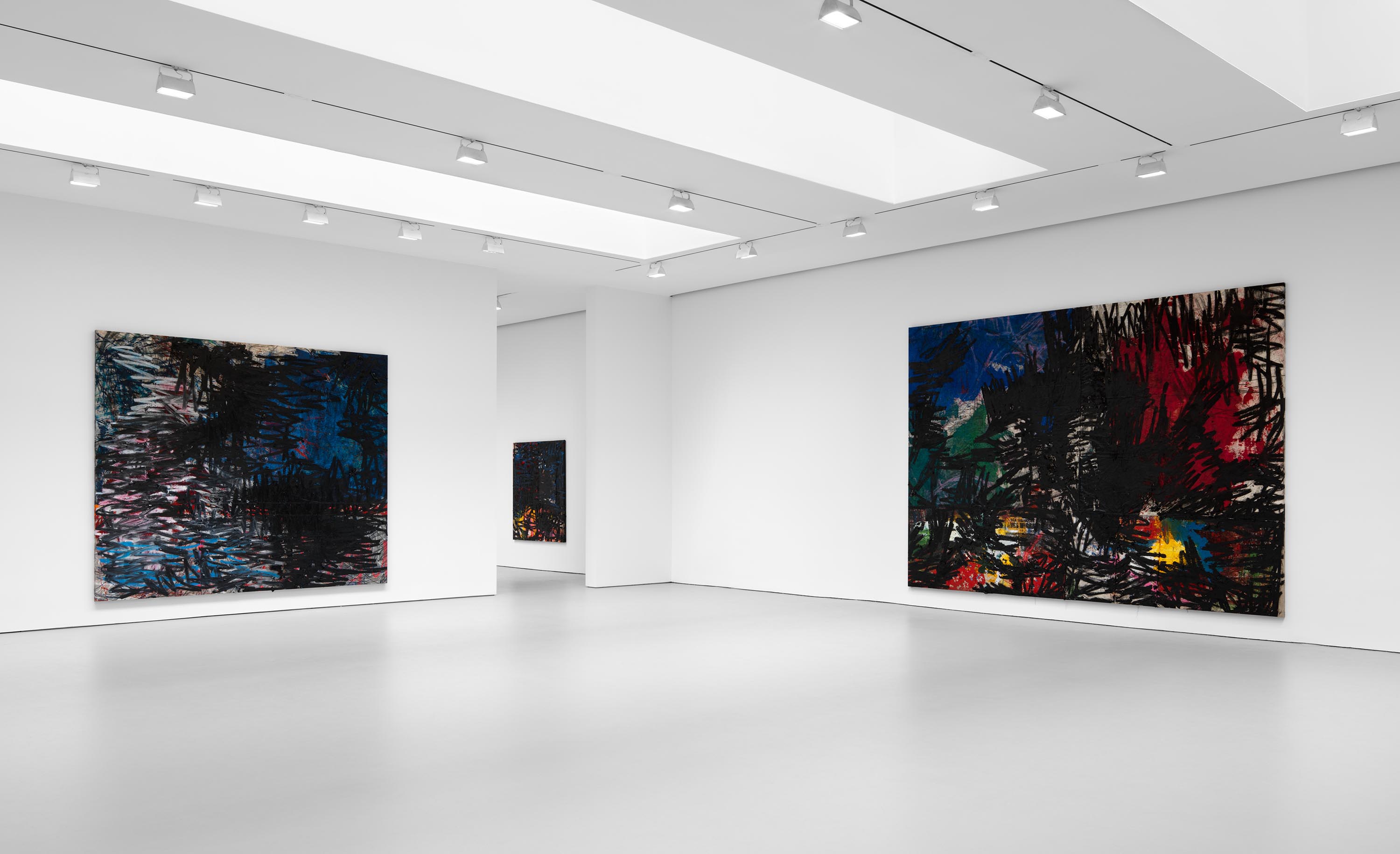 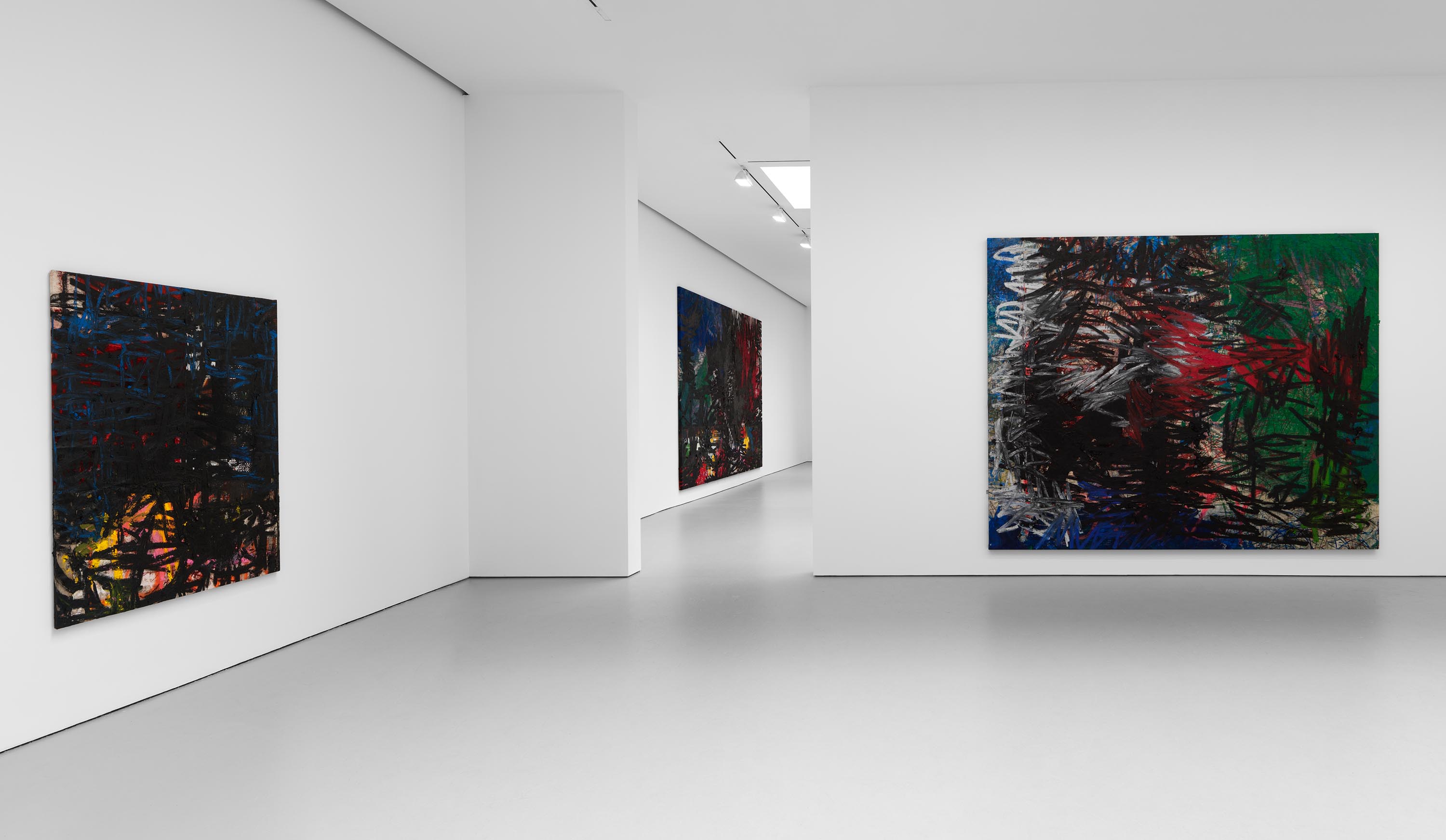 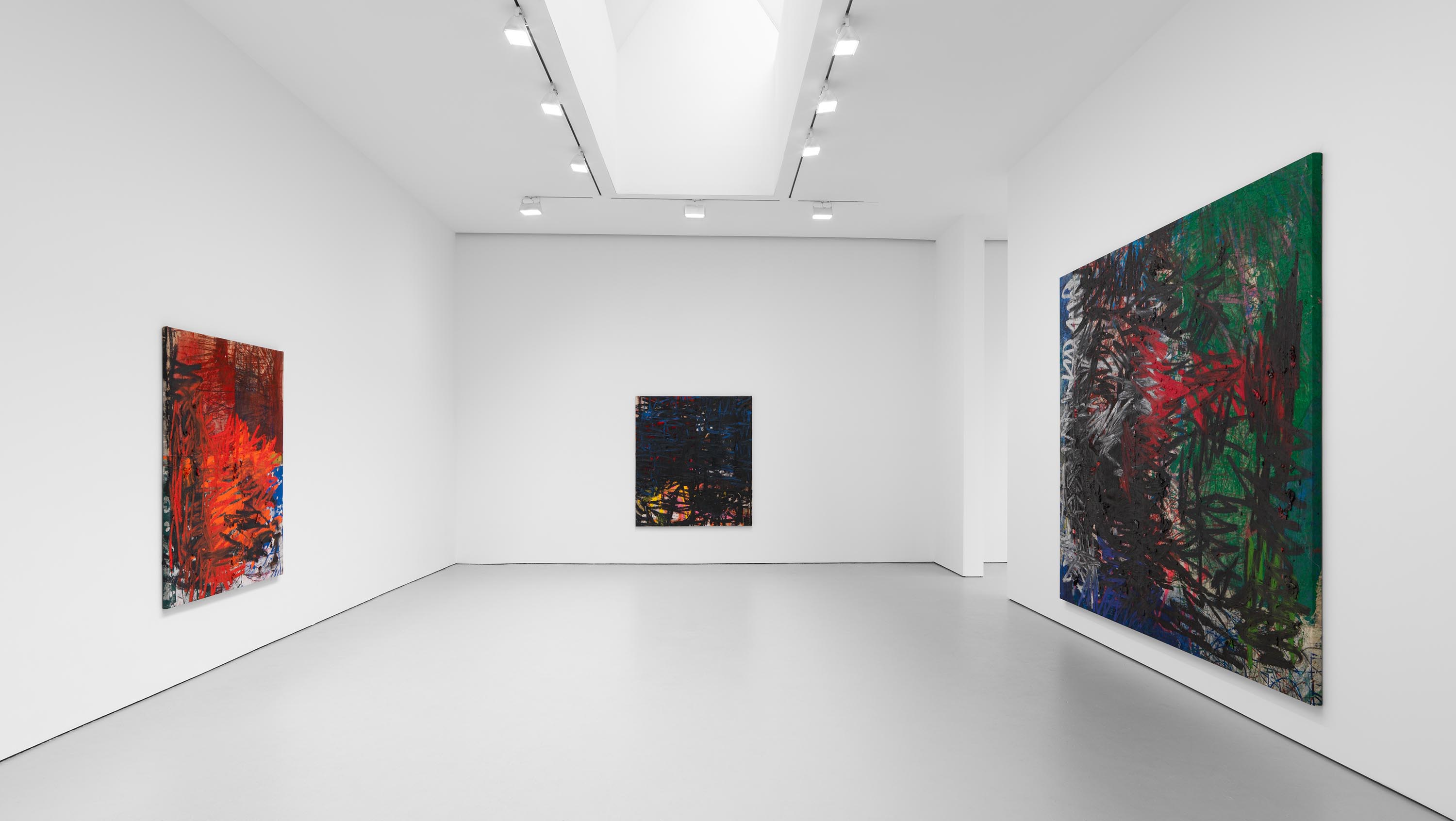