‍
At the center of Adams’ practice is the enduring challenge to communicate presence — both of the self and within a collective setting — through absence. Adams activates this charged space in an articulated practice that combines weaving, installation,
and performance. Anchored by his exploration of hybrid identity within the constraints of post-apartheid Cape Town, South Africa, Adams’ work explores notions of race, religion, sexuality, and generational trauma as embodied by the community from which he sprung. Born Muslim yet raised by Christian grandparents in the former “Cape Coloured” township of Bonteheuwel, Adams learned to navigate complex histories, embracing both South African culture and Islamic traditions as witnessed from within the domestic spaces that shaped him.

‍
Lining the walls of the gallery are ten heavily embellished weavings inspired by patterns found in the remnants of linoleum floor-
ing removed from the homes of childhood friends and neighbors. Composed entirely of locally sourced materials — wood, stone, and glass beading, nylon rope, silver and gold chain, along with cotton twine purchased in Bonteheuwel — the tapestries articulate actual spaces. Relic-like, the extracted ground is a domestic time capsule recording bodily weight. Worn-out motifs reveal the daily movements of the people who live there, shedding history and trauma with each marking. Adams’ own history is housed in these spaces; memories from childhood through adolescence are imprinted upon these fragments that later in the studio are transformed into handmade woven compositions.

‍
In exchange for the decayed floors, Adams furnishes his neighbors’ homes with new linoleum. At the studio, the excavated parts are traced and serve as a template to create abstract blueprints of embellished memories, purposefully misremembered to grant agency to the artist and their former owners. As Adams explains, the concept of manipulating objects within the home, specifically linoleum, “was really about looking at the domestic space that produced me. Looking for clues. If my environment that I grew up in and was placed in was different, how different would I have been?” In reworking the linoleum’s original paths, Adams reconstructs his own narrative — one which serves as a fantasy, and the start of a journey both tangible and spiritual.

‍
Within the process of mapping his community, Adams re-contextualizes the shared histories of his close-knit neighbors, and his own, positioning his tapestries along the mythical path of Joseph Campbell’s “Hero’s Journey.” In a unique juxtaposition with Sufism (a guide for the artist’s spiritual belief), the symbolism within Campbell’s monomyth largely mimics the teachings of the ancient religion, espousing, above all else, the importance of exploring the occult universe, and oneself, for a more certain path to enlighten- ment within one’s lifetime. The premise for this exhibition is shaped around this concept — beginning with setting the scene of daily life, crossing the metaphysical threshold, delving into the unknown, and ultimately finding the road back to oneself, or a state of resurrection. Each of the ten chapters of Campbell’s philosophy is referenced within the tapestries and titled according to their part in the narrative, translated to Adams’ native Afrikaans in a nod to his personal history. What materializes, overall, is an asynchronous bridging of past, present, and future — where Adams manipulates the design of his community’s interior space, he weaves fictional stories that simultaneously honor the lives lived and roads traveled.

‍
In a mirrored action, Adams encourages the viewer to chronicle their own story by carving desire lines through the gallery’s immer- sive environment. Desire lines refer to the unplanned, dirt offshoots off a main road, formed through the repetition of consistent foot traffic. They are only established through the impetus of one person (or one hero) — a shortcut that inevitably paves the way for those who follow. Adams replicates these desire lines in his tapestries with areas of altered color or mutated pattern, while simul- taneously giving the visitor a directive to do the same. Studded across the gallery are five suspended sculptures rendered by a variety of wire fencing and material remnants from the artist’s studio. As if caught in a windstorm, these cloud-like sculptures mimic the irregular contours of dust and are meant to evoke an indigenous celebratory dance called “Rieldans,” once performed by his grandparents, using dust as an interactive element within its movements. By giving shape to the immaterial, both through weaving and sculpture, Adams translates absence into energy and material into narrative, ultimately activating the space for all who choose to cross. 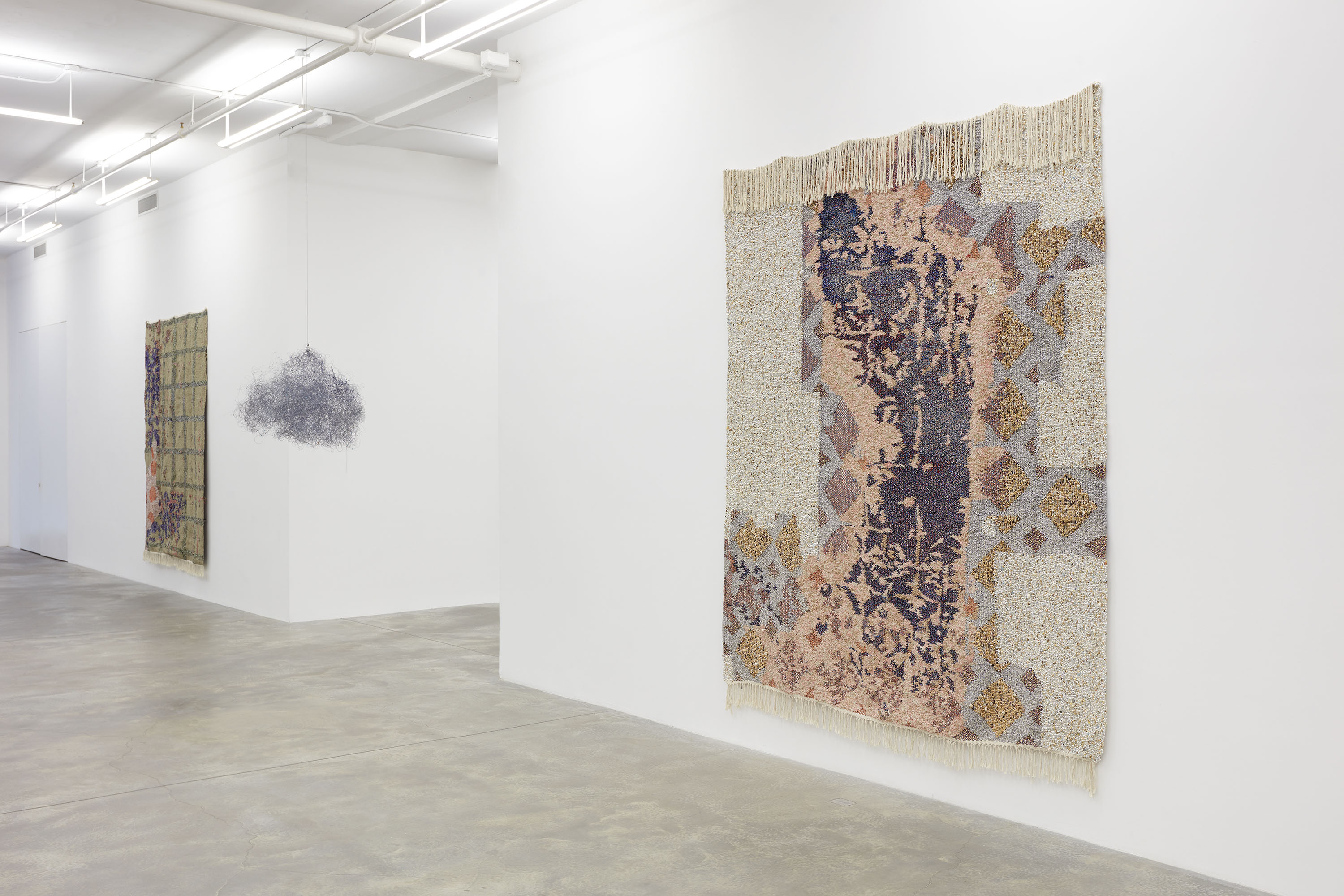 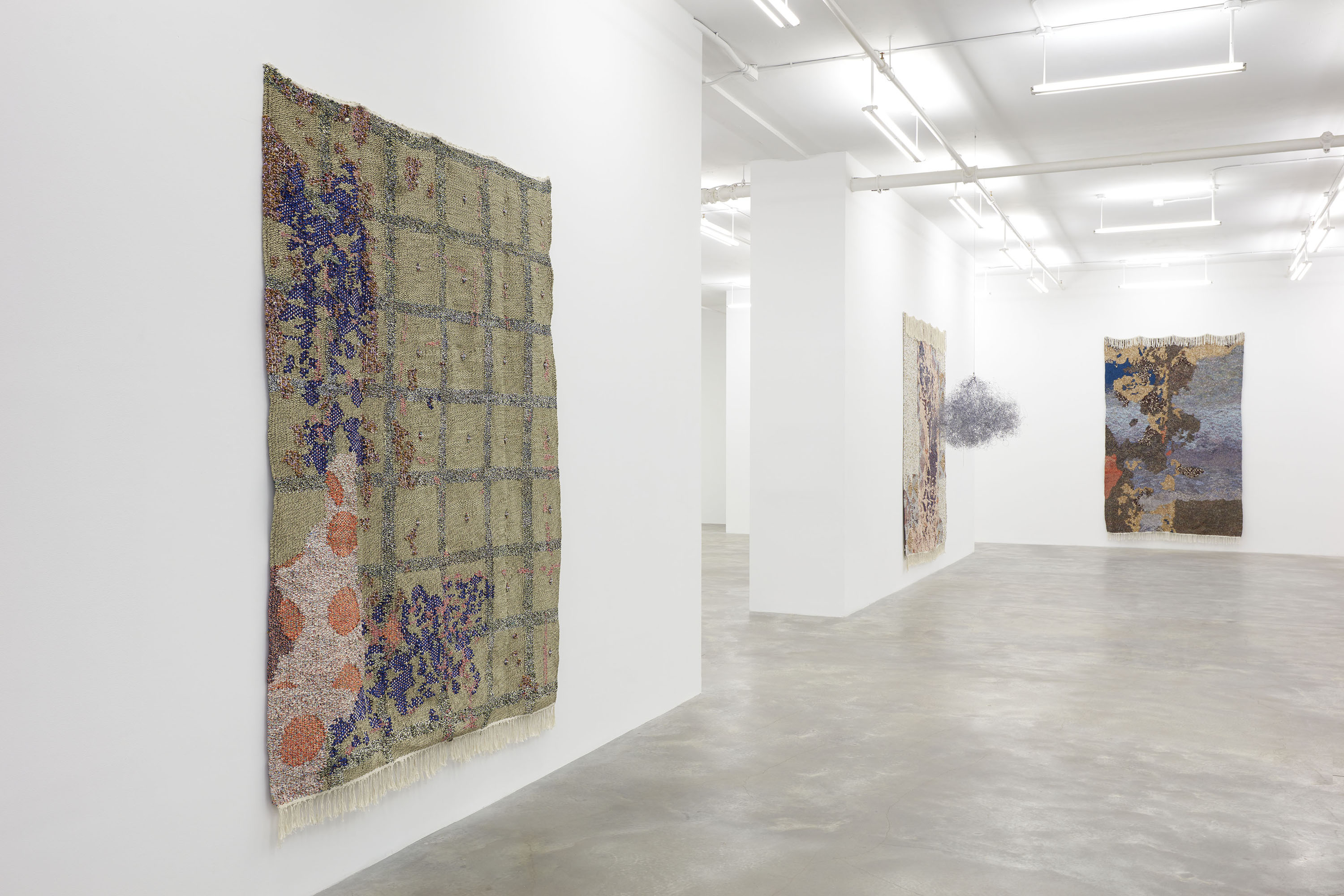 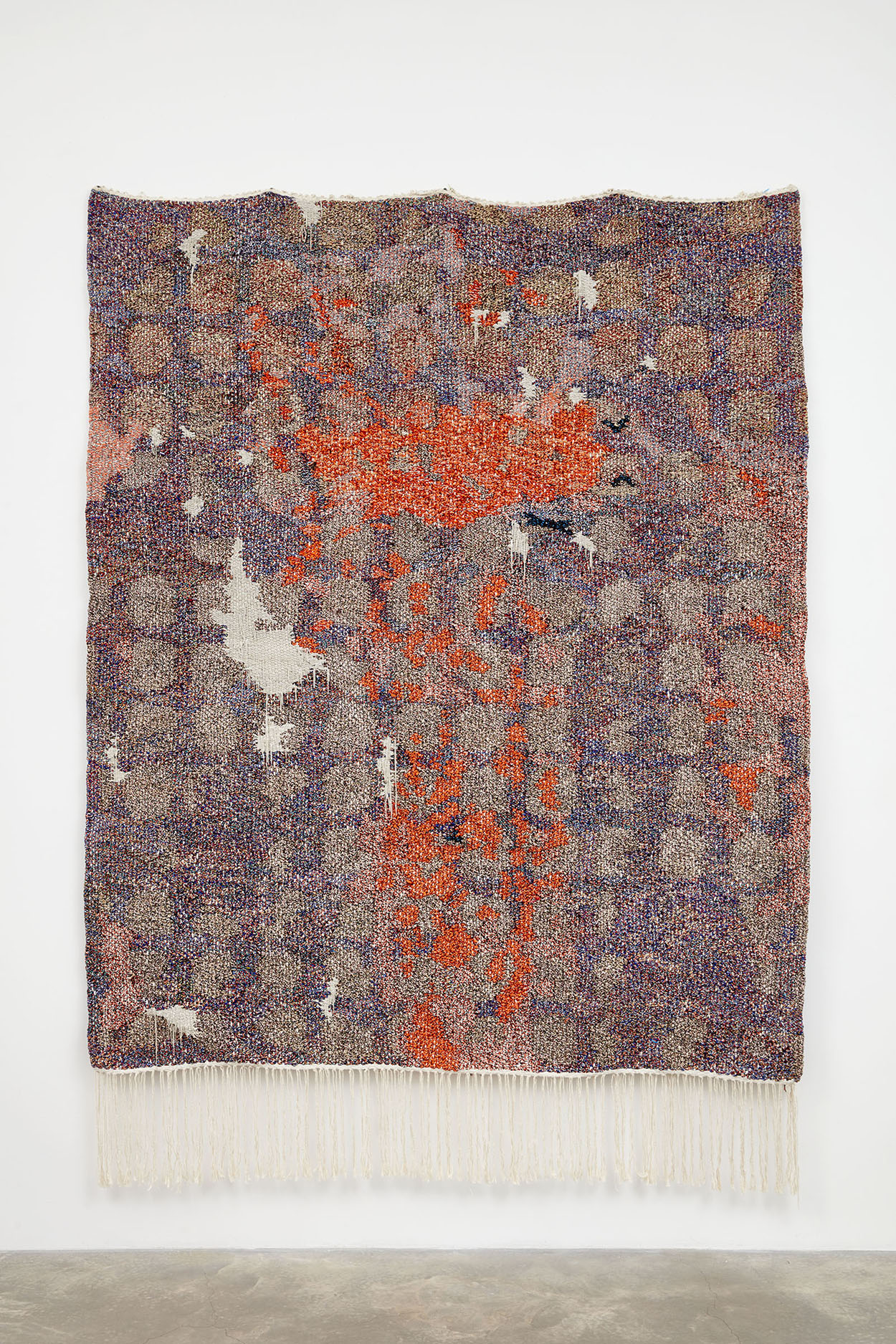 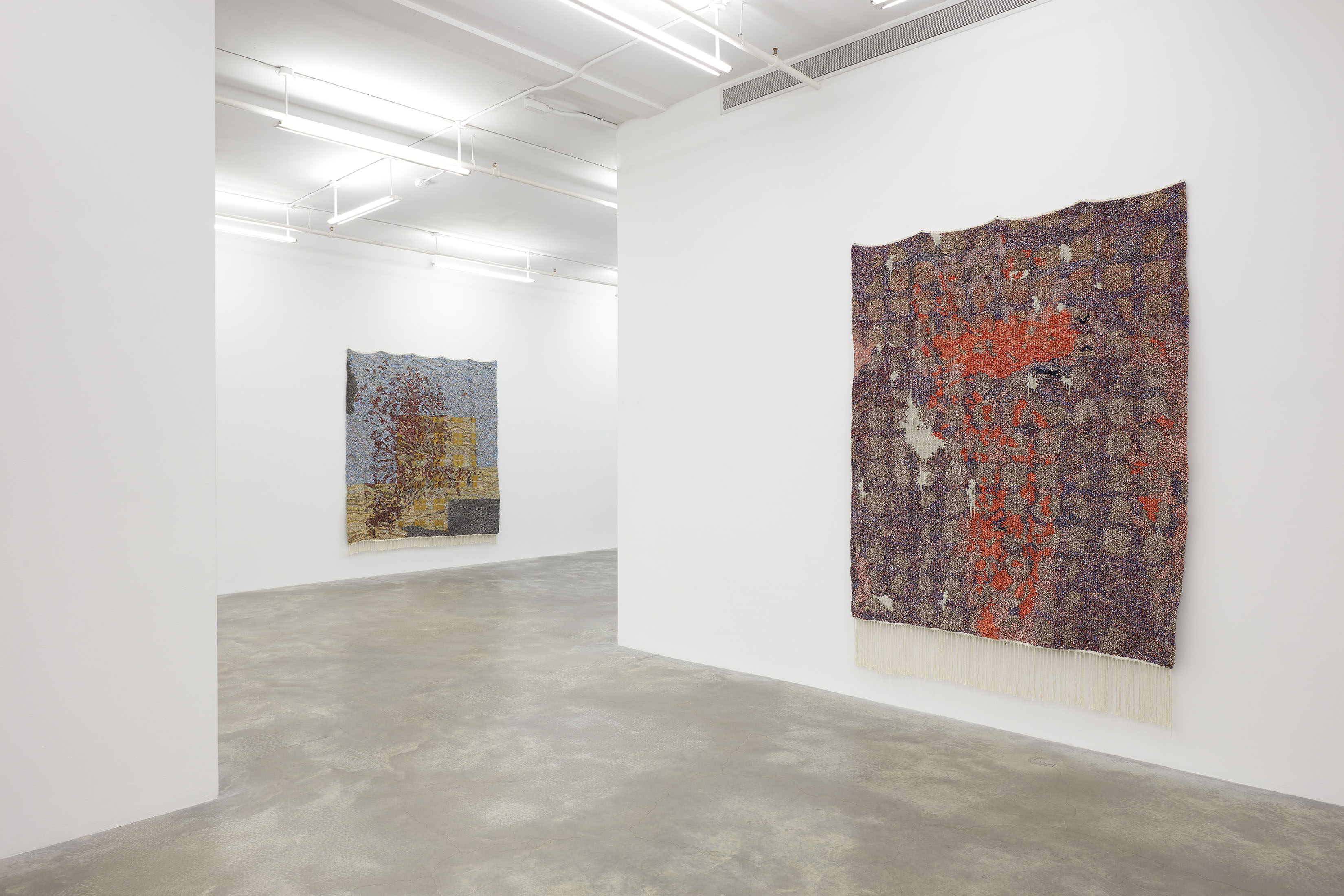 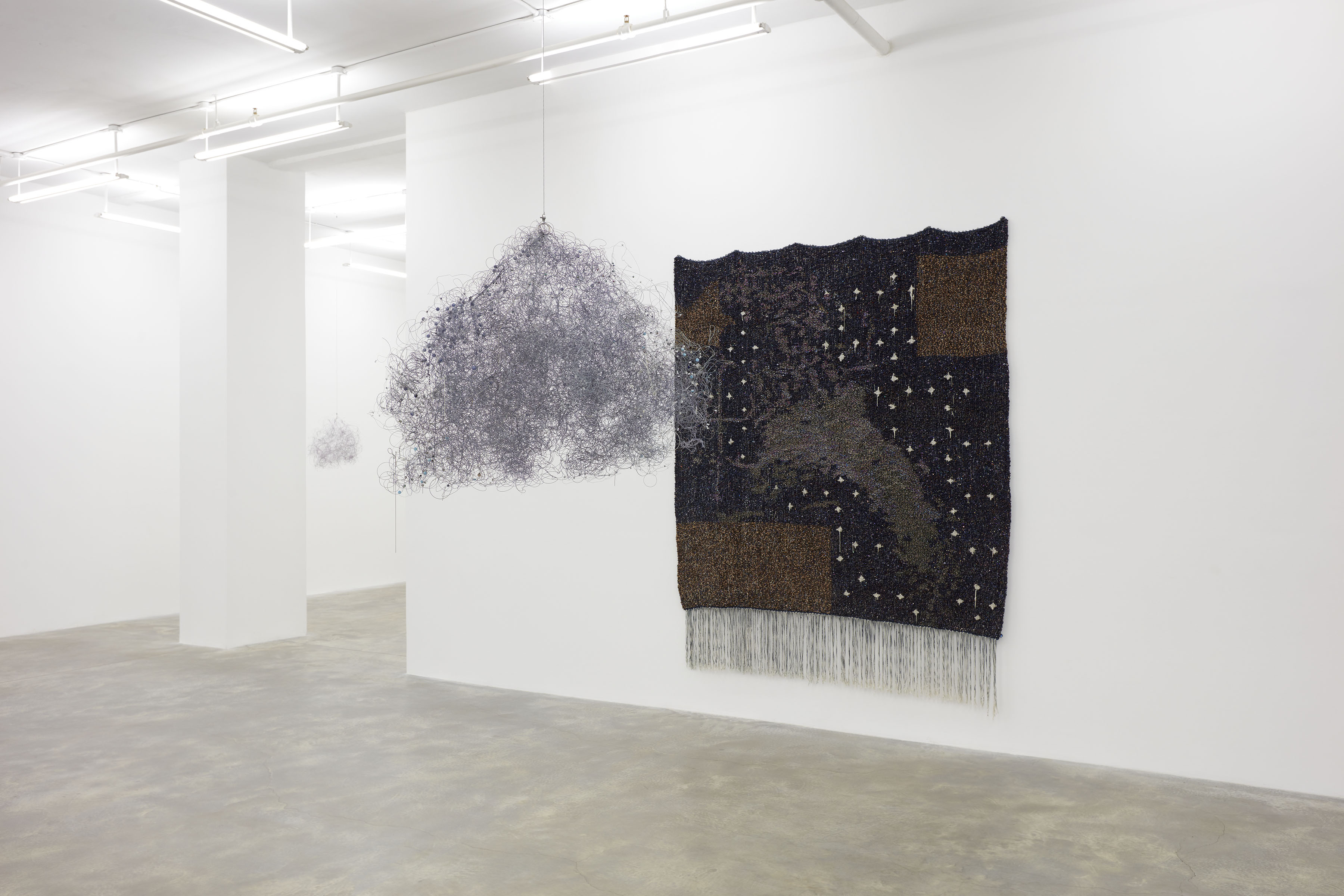 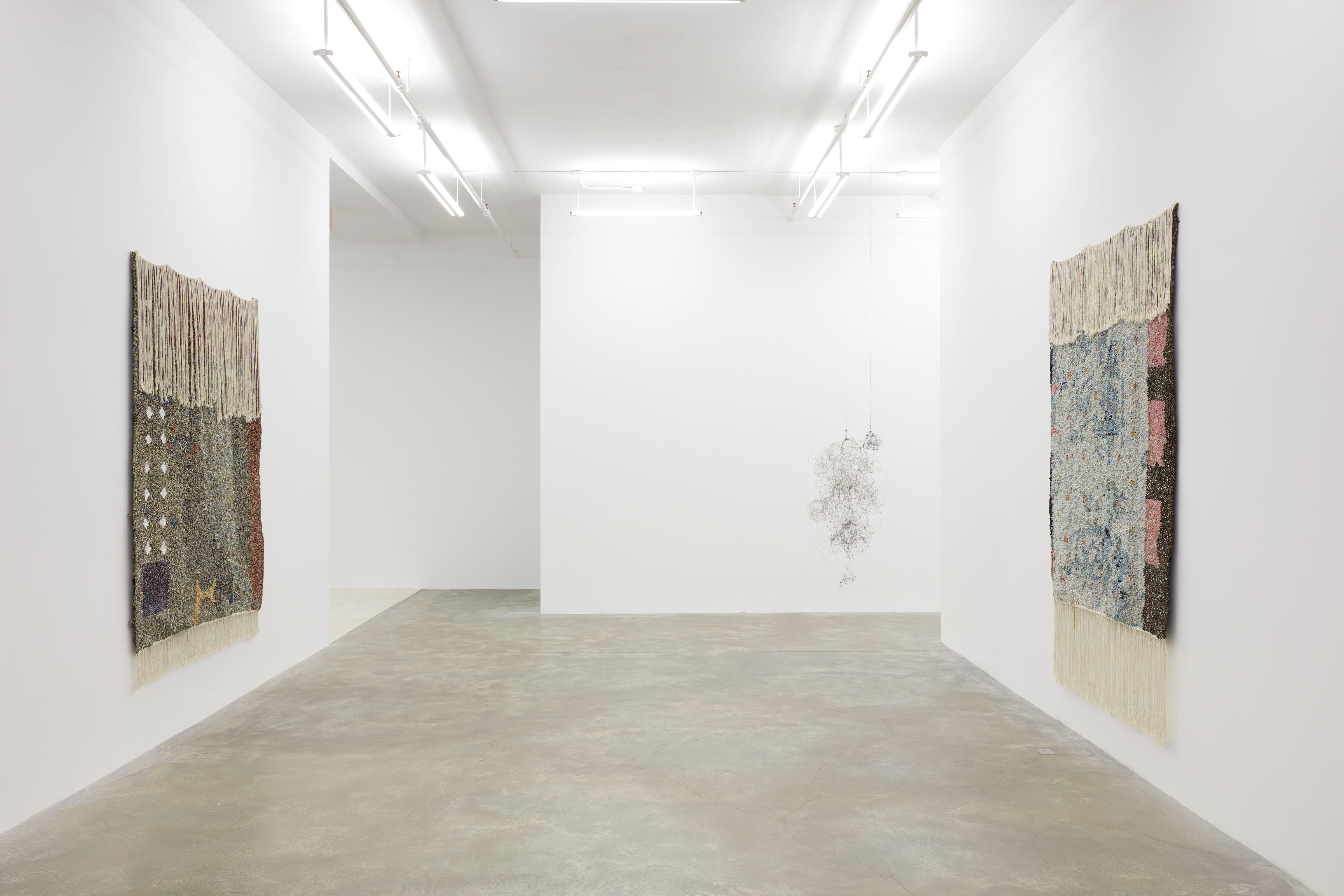 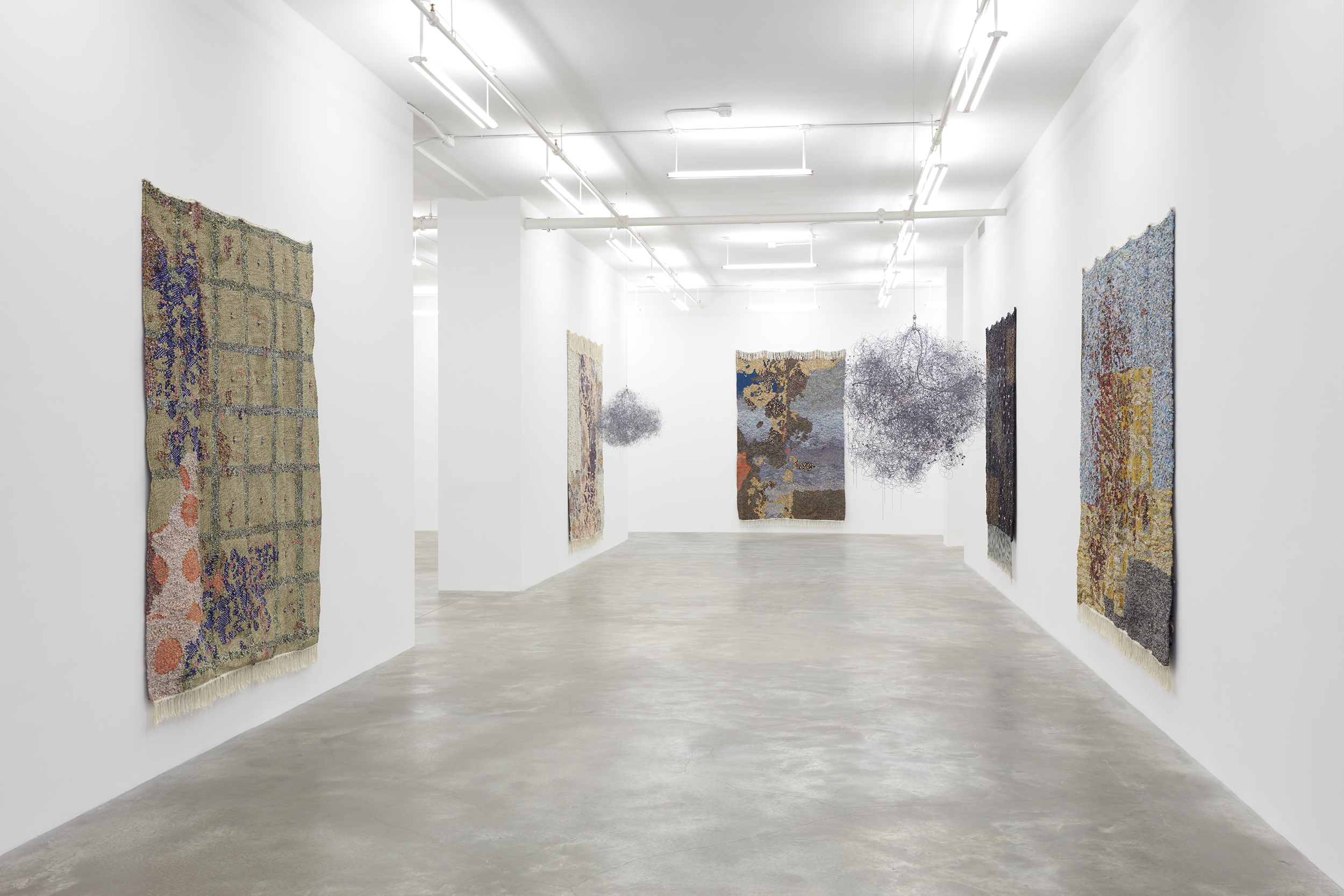 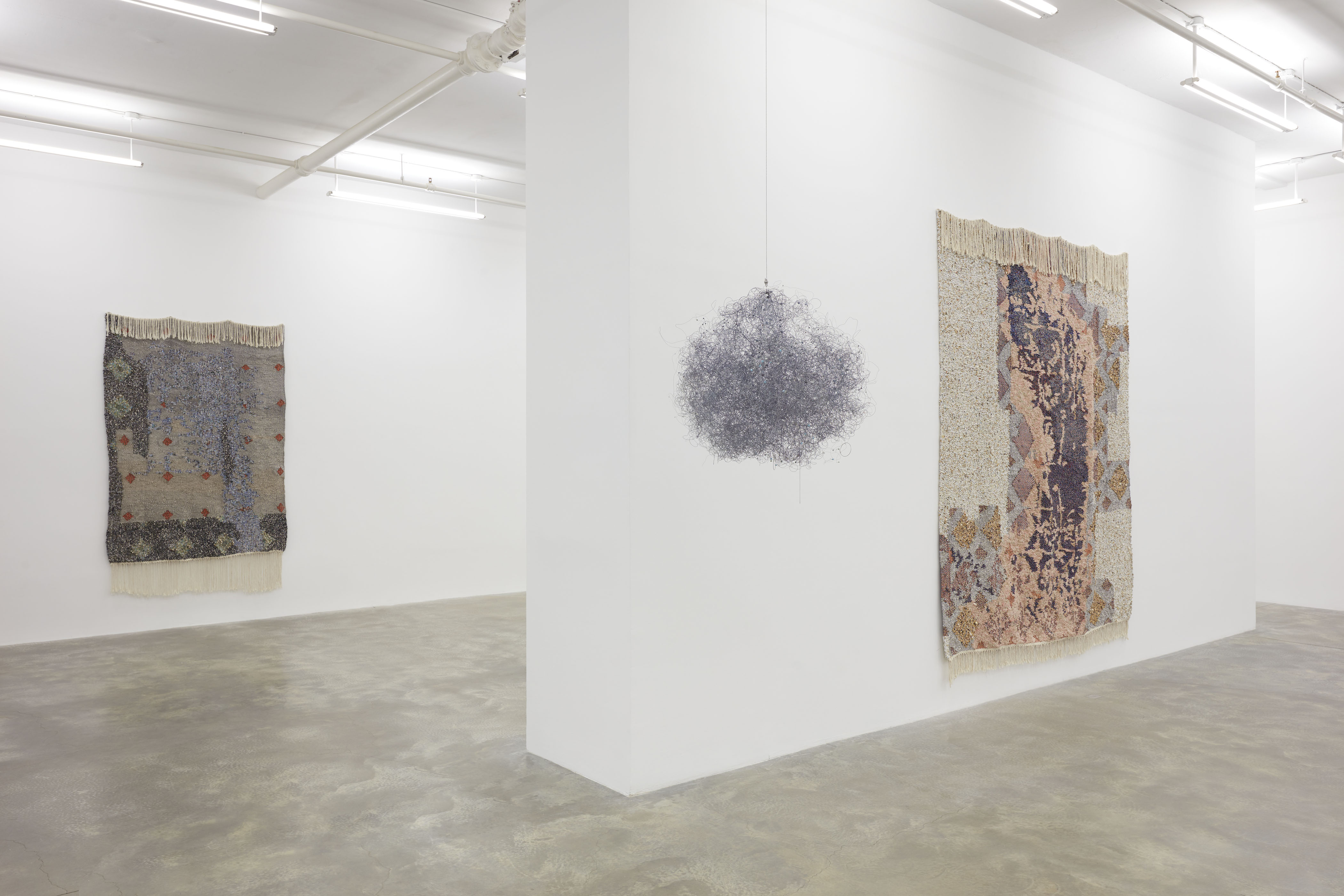