Can there even be an underground when there's no floor to separate the basement from the storey above? The underground is supposed to be the place where things are happening that remain invisible in the mainstream, things that are unsuspected, exciting, subconscious, dark or transgressive.  What if this dynamic gets disrupted? Is it possible in today's times to make a clear distinction between norm and deviation?  Isn't there something fundamentally wrong in times when Donald Trump is not only the face of power, but also that of an irresponsible, insane form of individual freedom? Is there still a margin if also the center of the so-called 'norm' seems to fall apart in the smallest, abstract entities we still - perhaps not for long - refer to as "individuals"?

In 2010, Guy Van Bossche painted his work Underground Second Floor, which sought to subvert the relationship between surface and underground. The painting shows a grass plain with a gray platform in the center and underneath, hidden in the shadows, a trench. The work plays with the concepts of visibility and concealment, and clearly alluded to a dynamic in the art world. Ten years later, in what will be his first solo exhibition since way too long in his hometown, the artist presents new and older works capturing a discomfort that is increasingly exposed to broad daylight. The floor has disappeared and the surface is covered in light. But the artist doesn't want to create an explosion of this ubiquitous discomfort. He's out to make something that is somehow 'good', maybe even 'beautiful'.

You could describe Van Bossche's work as an attempt to defuse an overwhelming visual reality by the act of painting. But what exactly is this sense of overwhelm?  Since the 1980's, he has been responding to existing images with paintings.  Often these are found images or photos taken by the artist. Van Bossche looks at these images in a detached, instrumental and analytical way: he wants to translate them into a new material constellation. Or to put it differently: to translate them in techniques, compositions and illusions such as light, depth, foreground and background. His standpoint does not primarily question the meaning of images - although that question always plays a part - but forms a translation that seems to mainly reveal the fact that the image was made. He tries to throw off the paranoid question of what such a created image exactly wants of us. In the words of the artist, it is a quest for the quality of his discomfort - an inconvenience that seems to stem from an ever-present disbelief, especially in a visual culture of success, applause, auratic works of art, etc. The artist constantly seeks out a state of inconvenience, by repeating themes, exhausting them, wringing the social status out of pools or art collections - just to name two of his recurring subjects.

The above word 'quality', can be interpreted abstractly as property . It is not the subject that is central here, but the trick that features such as color, transparency and luminosity play on us: namely, the production of limited objects with a stable meaning. Various subjects may be clearly recognizable in Van Bossche's figurative work, but boundaries and contrasts always disappear in a continuum of shades and tonalities. That as well is a discomfort: the eyes being pelted by photons instead of meaning. And perhaps that is the tension from which this work arises: that between not believing what you see and the fear of being totally overwhelmed by an indifferent light.

In the exhibition Underground No Floor this tension often results in ambiguity and absurdity, a sense of frivolity that Van Bossche seems to allow more and more in his work. A tilted American flag hangs down around an invisible body, full of superficial tension. The flag is trapped in a minimal cube reminiscent of Bacon, intersected by a chaotic interplay of shadows, which refers to a reality outside the image. This work is called Early morning , a title that could refer to the light casting the shadows. However, given the political connotation, it also involuntarily raises the question of what kind of day is about to start. In another work, the violence one would expect hidden behind the curtain is floating, pontifical and surreal, in front of it. Is it coming at us, or is it flying away from us? Did the artist throw an axe at his illusion of light, volume and depth, or does the painting swing a weapon in our face? You could call work like these strange or violent, but I also find them funny and free and therefore relaxing - perhaps because they dissolve the old tensions between upper- and underground, and by embracing that situation reach out to another reality. 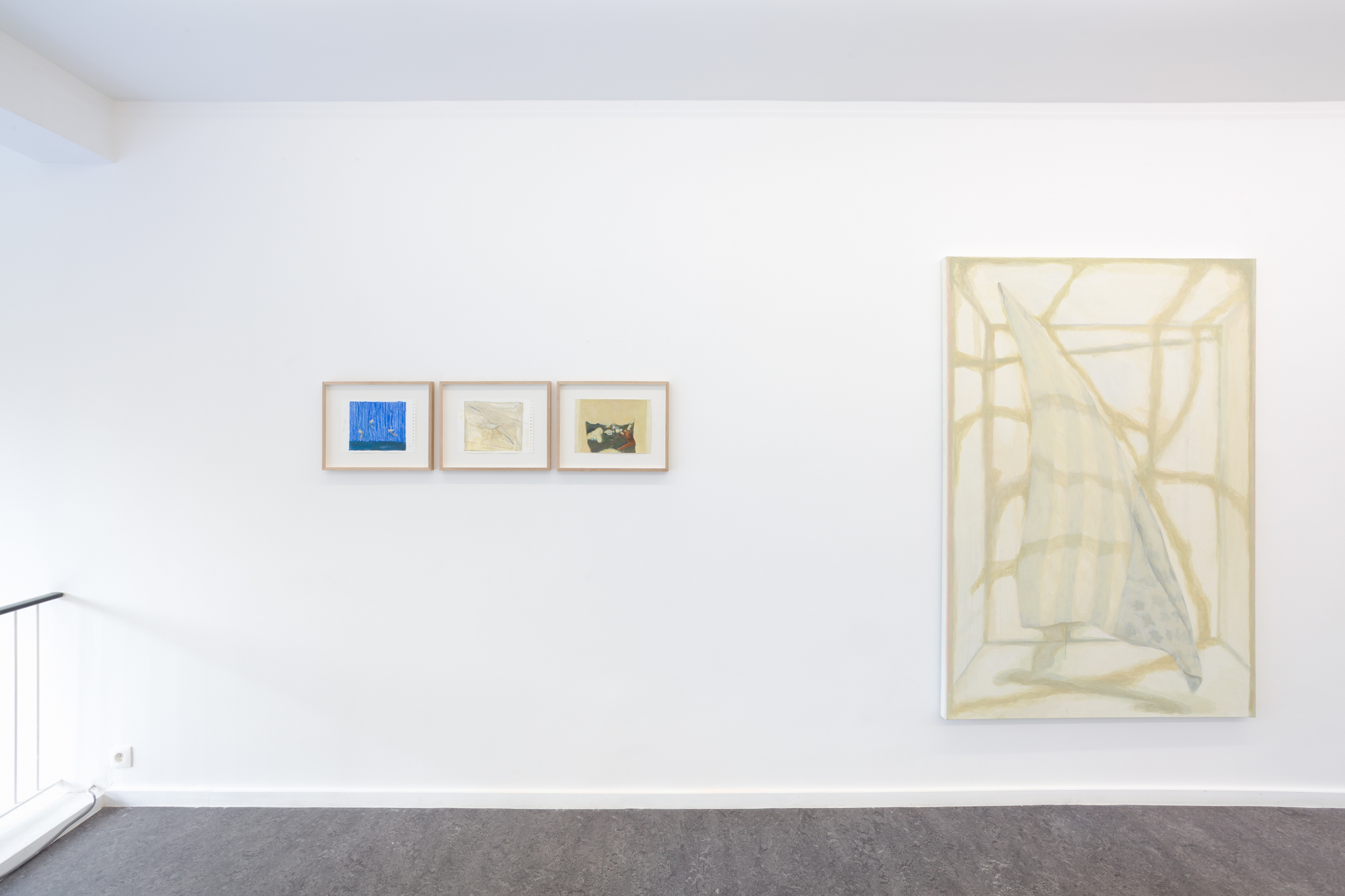 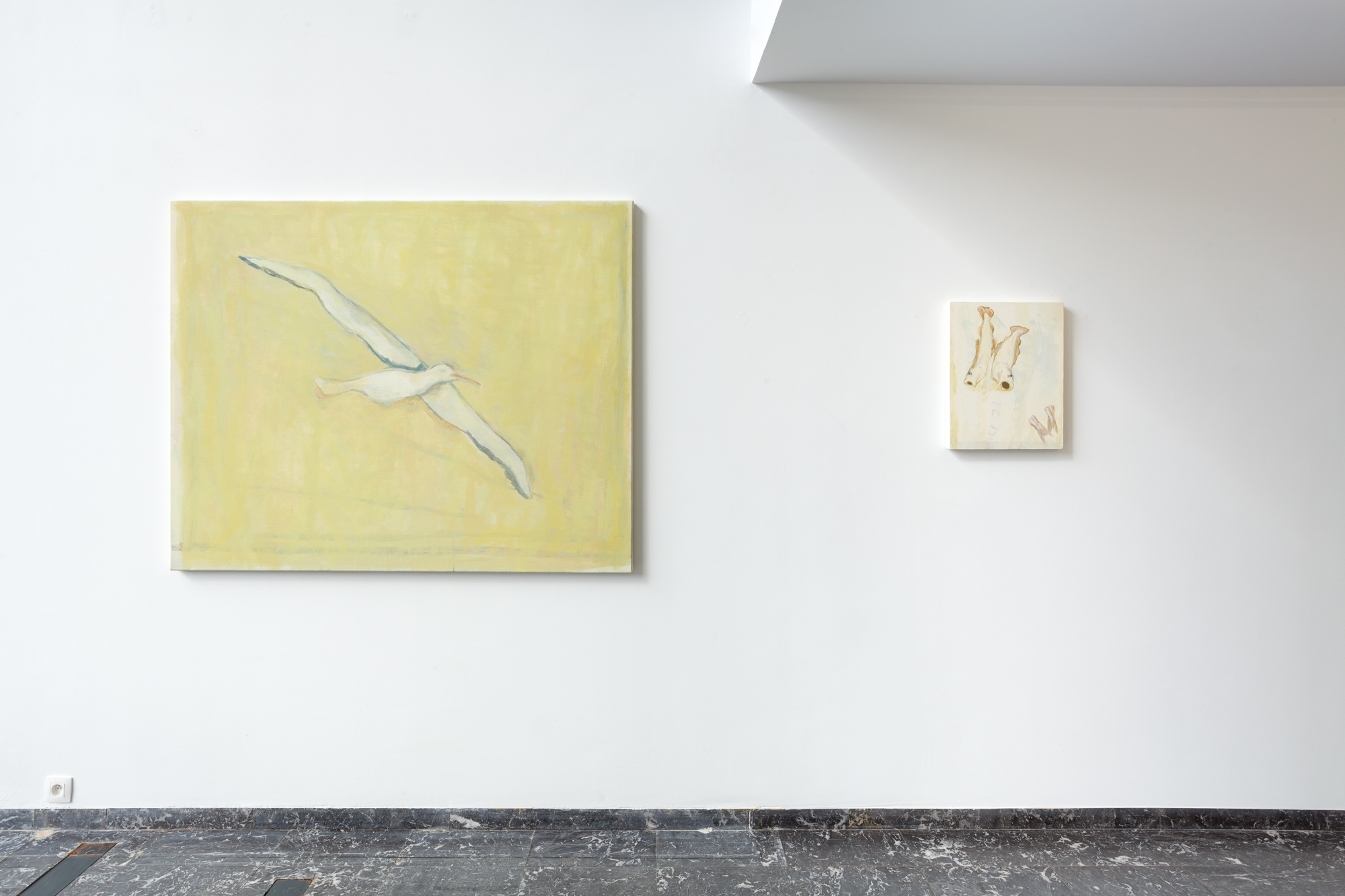 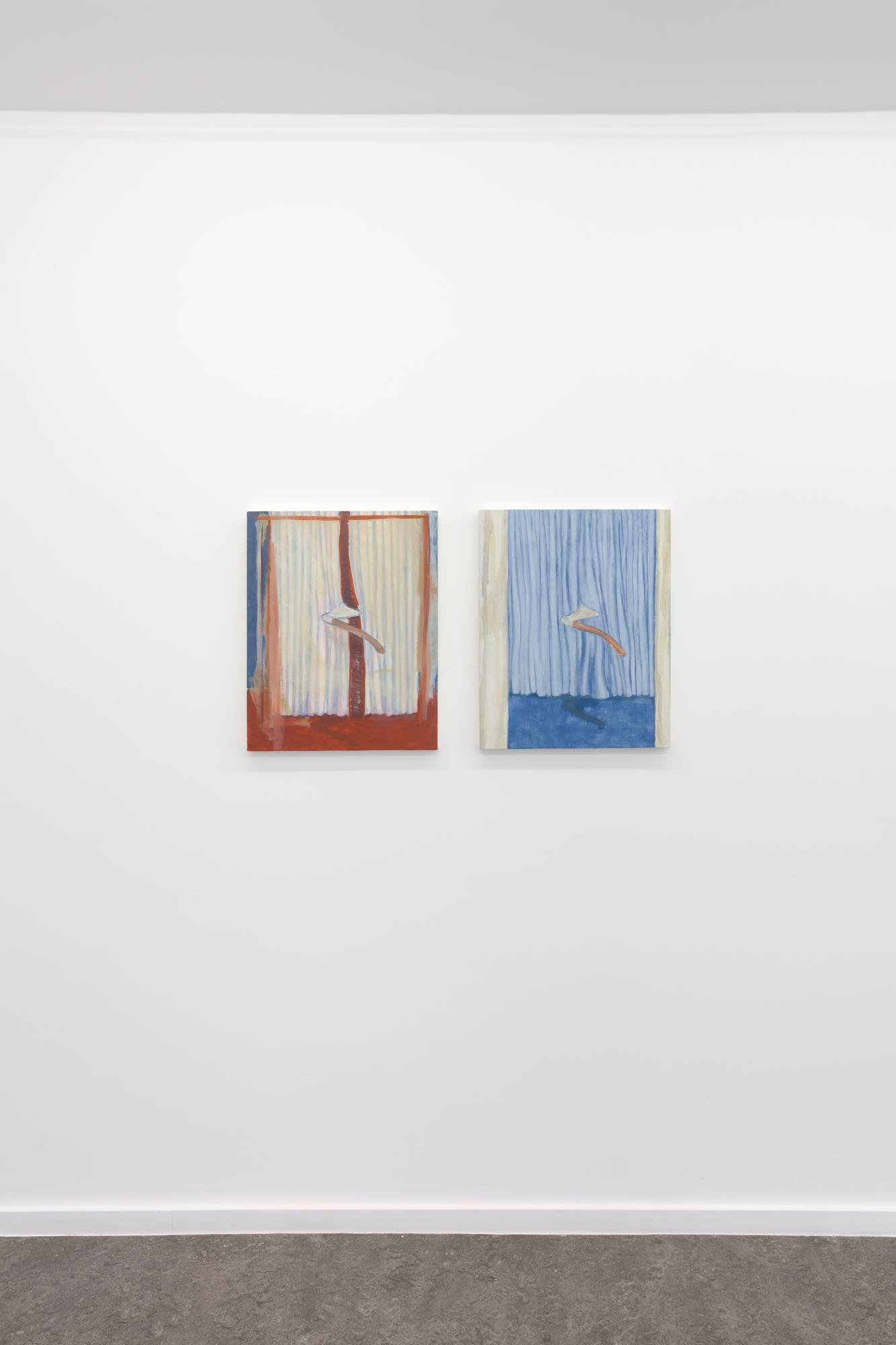 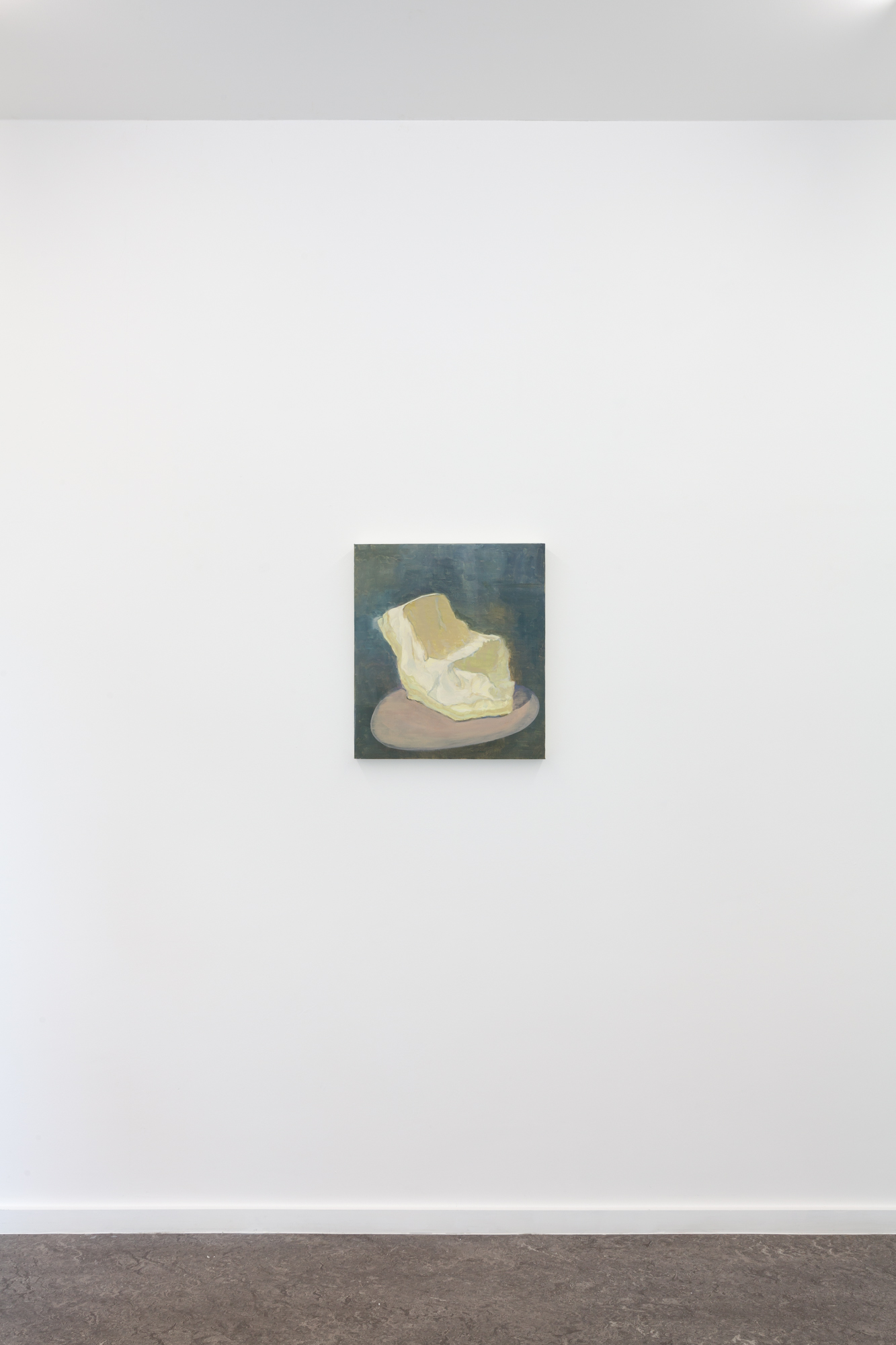 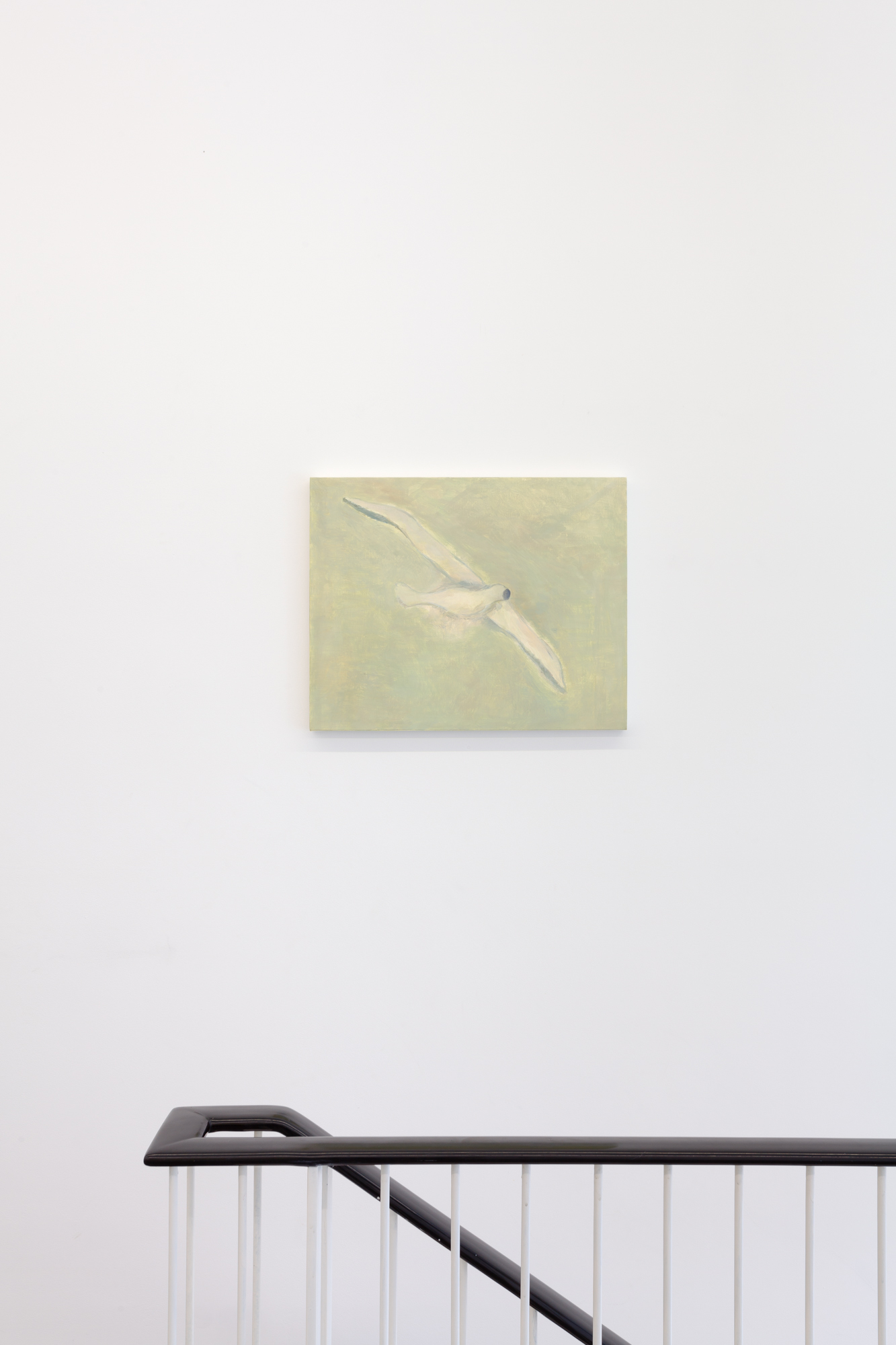 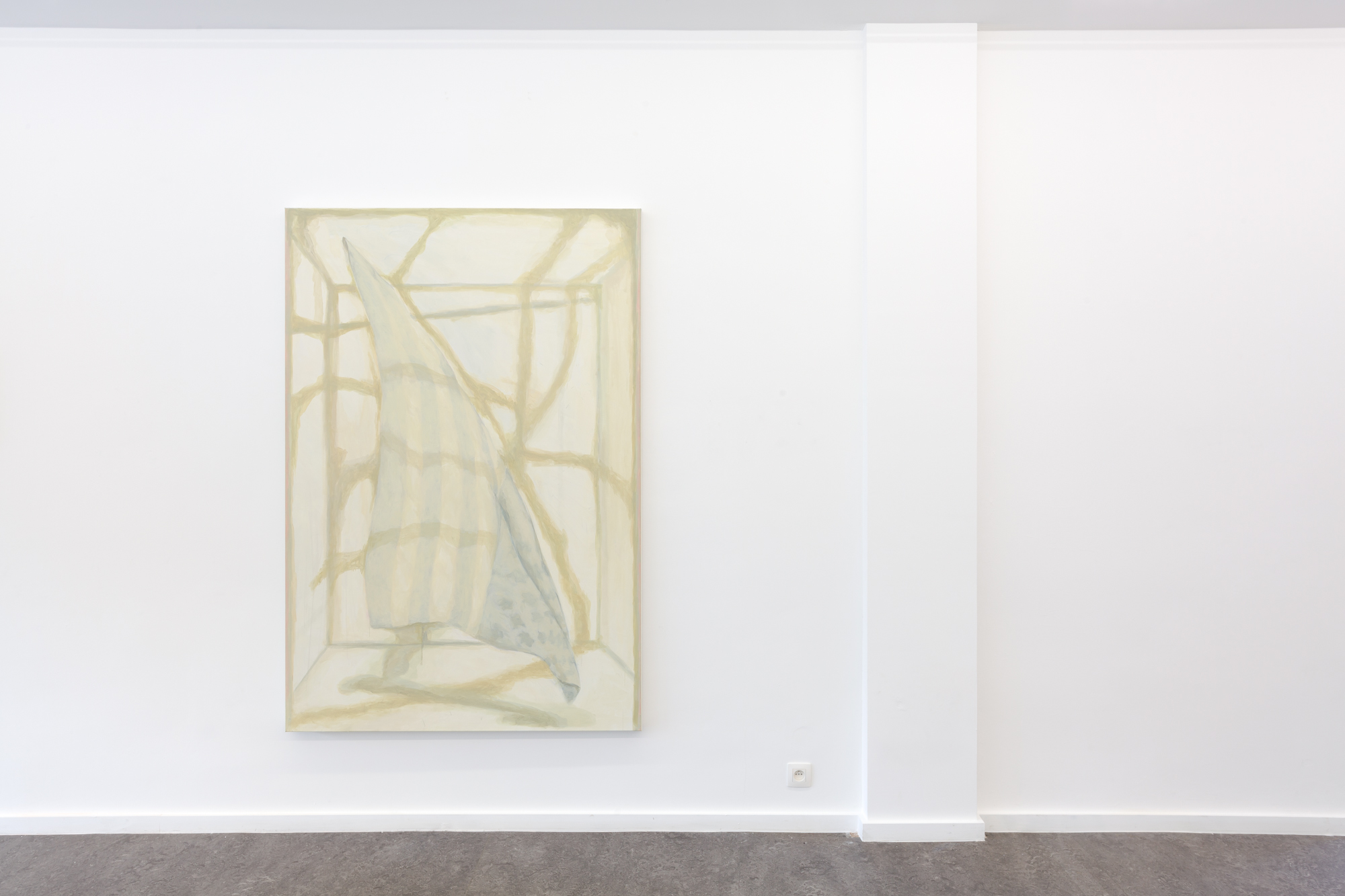 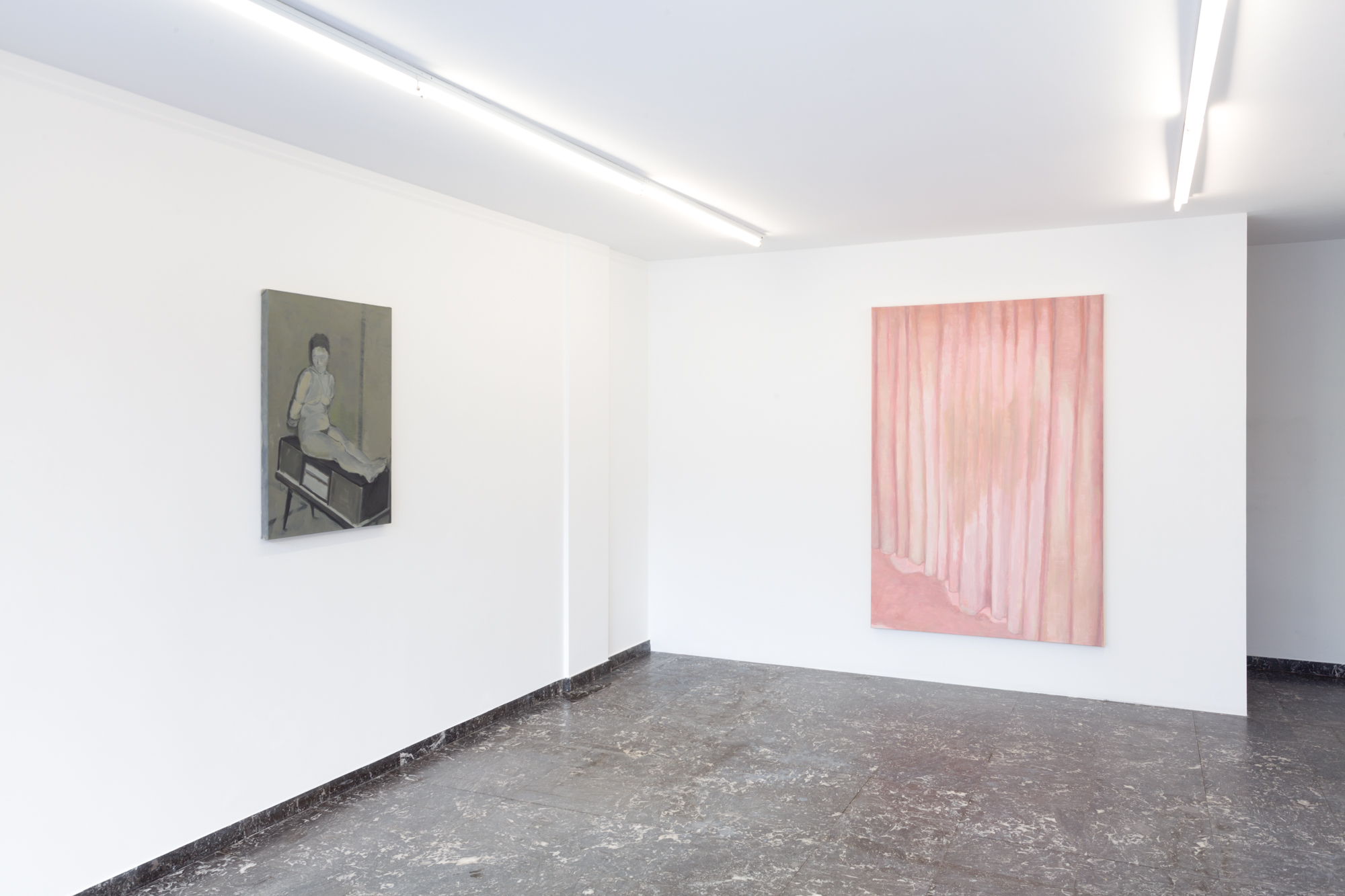 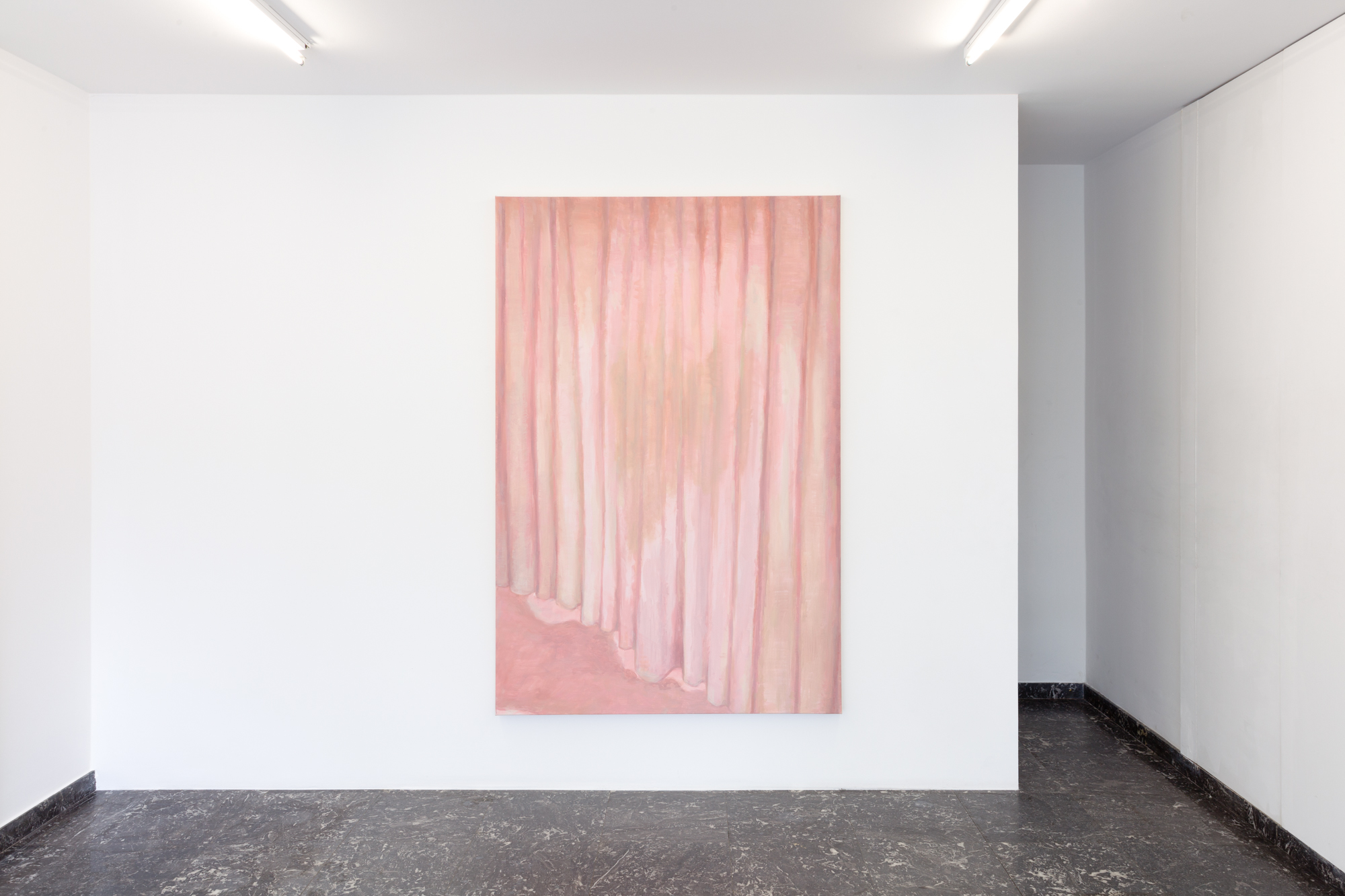