In the Studio with Oliver Osborne.

In the Studio with Oliver Osborne.

The rubber plant paintings span eight years of your enquiry. Recently you’ve made renditions of Robert Campin’s ‘Portrait of a Fat Man’, painted in 1425. This year, you painted the portrait with a sunset to represent the Californian sky behind the bunker it was exhibited in. What keeps you sustained by the act of repainting?

The paintings that I’ve been making after Robert Campin’s Portrait of a Fat Man are the first series of paintings that directly take a subject from art history and repurpose it to my own ends. I’ve added a little bit of weight to him, but otherwise the portraits are fairly close to their 600 year old model. He lurks in a corner of the Gemäldegalerie in Berlin (there is also near identical version in Madrid). I’ve always been really drawn to him. He has this very enigmatic, slightly resigned kind of expression. I actually first started making paintings from him about four years ago and it never really went anywhere beyond being kind of an enjoyable exercise, but then last autumn I started to rework some of those first attempts and from that new paintings began to emerge. The thing I'm always looking for in a subject tends to come back to how malleable the subject can be, in contrast to how nameable or legible it might be. Often my work will try to speak to the fact that our ability to name things is really masking our ability to understand things, so we can see and say ‘plant’ or ‘Merkel’ and we know that it is there in the painting in front of us, but it really tells us nothing of those two things whilst still co-opting some of their iconic power.

The word malleable is really interesting in relation to the themes you paint. Whether it’s of Angela Merkel or a plastic plant, presumably from hours of cogitating, you become attuned to their minute details. But it’s the familiarity that isn’t strictly important. What draws you in are the paintings’ mutability when placed in different contexts. Like ghosts, as you alluded to on our call, themes follow you, appearing again and again at moments in your career. Could you expand on this ghost complex?

I stress the importance of the subjects being malleable or enigmatic because that’s the experience I have of the world. The ability to name things doesn’t make them any easier to understand. So from quite early on I treated painting as a language which has its own grammar and vocabulary, its own accents and dialects. Our familiarity with a language impacts what we understand, and equally importantly it influences how we make ourselves understood. An exciting thing about art making is that the visual languages we use have an extraordinary potential to change their meanings in unintentional ways when they arrive in a different context or time. The benefit of returning to the same subject matter over time is that by having something fixed, you can measure the developments or shifts in thinking that have taken place. The idea to paint the plant must have been (at some point) more or less instantaneous but the moment of insight or imagination is less interesting than the fact that you kept coming back to it. Trying to understand why we come back to anything can feel quite vague, but these anchors are very human. You stick with something and it becomes something more, and at some stage you have something that you can keep working with, that is in itself generative of new ideas and which now remains malleable even in its familiarity.

Often in the painted versions and repetitions, you’ll work into them with subtle differences. Some so faint and indecipherable viewers might not even notice on first glance. On looking closely at the rubber plant paintings, we notice imprints of hearts, achieved from pressing the wet surface with kitchen roll. What precisely are your aims with these painterly sleights of hand?

The way I paint the oil paintings is quite academic, lots of layers building from tone and form to colour and a sense of light in the upper layers. This method often involves some rubbing or sanding to get back to preceding layers, but it also involves removing wet films of paint with tissue paper and, a little like the marks of corduroy visible in Francis Bacon paintings, I started to allow the patterns and motifs to remain visible. It adds a layer of interference or noise to the image, the presence of the heart was somehow productive as a shorthand for something emotive in parallel perhaps with the rubber plant being a shorthand for a kind of banality. You can see ‘plant’ and you can see ‘heart’ but the purpose or content of the painting remains (I hope) more abstract or enigmatic.

It also adds to the performance of looking – the viewer has to physically orbit the paintings to notice the finer details. Often you'll toy with the gallery in your exhibitions, too. At Peles Empire in 2019 the paintings were precariously hung on curtains, and at Gio Marconi the largest painting spilled over the wall, leaving the stretcher bars bare to see. Do you approach the gallery as a medium?

To some extent I think this probably ties me to the time I studied in the mid to late 00’s, when a lot of the discourse seemed to hinge on thinking about context and an understanding that all relationships within an installation are conditioned by the parts of that whole. The slightly destabilised installation strategies you mention are an attempt (gently) to play with the way digital realities allow for a kind of slippage, something kind of unrooted, and to throw that back into an irl gallery experience. The most literal expression of this is a mini-series of plant paintings that are installed in a way to suggest they are passing through the wall.

You’ve referenced the word ‘flattening’ a few times. Could you expand on how your paintings, which are mostly representational in their manner, address a certain flattening of the world?

As a painter you have to acknowledge the fact that painting is analogue, that it is materially different from mediated or digital technologies, and that it will technologically speaking always be sort of behind. That painting liberated itself after the advent of photography, could be physical and free from the responsibility to represent is the basic the story of modernism. For reasons I don’t fully understand, my painting has always been flat. I’ve always pursued a very flat surface and I’ve come to believe that it’s somehow appropriate to the age to make flat paintings. We engage with images almost entirely through flat or mediated surfaces and I think if painting is to speak to this century and not simply to keep reperforming the developments of the last then it is going to have to engage with flatness, or at least engage with the flattening that will affect its dissemination. And what I understand by flattening is that you’re forced further away from where something is. So if I’m looking at a Julien Nguyen painting at Matthew Marks in New York right now on instagram on an iPhone, where is that image that I’m looking at? And then let’s think about that image, which is itself the product of a flattened world where marrying Renaissance composition with a kind of homoerotic Euston Road School style painting suddenly seems urgent and vital. What I’m getting at is that painting of this century has to engage with how the way our memories and thoughts are changed by becoming mostly online, digital people. The collapse of location and time is unprecedented, and flattening is the best way I have to describe that feeling.

As well as painting, you’re currently writing a series of aperçus and essays in preparation for an exhibition next year. How does writing influence and guide your choices as an artist? Does the writing precede the painting, or the other way around?

I don’t claim to be a writer, but from time to time I contribute exhibition reviews to magazines like Frieze. The process of writing about another artist is complicated and rewarding. But I also got in to the habit of doing a fair amount of the necessary writing for my own work, press releases etc., and too often these are a kind of anti-septic postscript to the months spent actually making the show. In an attempt to do something a bit more involved, I’ve started writing a press release about a year before it will be needed. In particular I want to try and write about the things I choose not to do as a painter and where these might come from. Much of the discourse around painting until recently was to some extent ideological - you painted en plein air to have a more direct encounter with nature than the easel painter, or you took a position like Krebber’s because where else could painting go in the late 20th Century? But ideologies in and around painting seem to have completely collapsed, perhaps because the art scene is now fairly pluralistic space, or perhaps because painting’s relationship to the market has accelerated its proximity to evolving fashions or tastes. Perhaps it’s naive to think that painting could be an ideological battleground - but it was once. We often focus on an artist’s predilections or impulses, but I think it might be just as interesting to discuss the things we have consciously and deliberately ruled out or rejected.

It’s refreshing to open up an artist’s practice that’s honest to those kind of decisions. As I sit here, on my desk are three of your books, ’European Paintings’, ‘Bonnie’ and ‘Der Kleine Angsthase’. Each, in their own way are thoughtful to the viewer experience, I noticed some pages spill over onto the next, the way your plant paintings allude to passing through walls. How do you treat the book as an extension of ideas in an exhibition?

Making a book is a rare and special opportunity, rarer even than the invitation to make a show. I’ve been lucky to have had a few occasions to do it. Bonnie and European Paintings were both made with the designer Marco Fasolini and the process of collaboration to explore what could be possible was incredibly valuable and educational. At the moment I’m trying to find the right context to make a second volume of European Paintings, which is now five years old and provided a fairly thorough overview of the kind of work I’d been doing until that point. The thought processes are actually quite different from those of exhibition making and when done right can be revelatory. Laura Owens Whitney catalogue, for example, was astonishing in how it simultaneously conjured both an incredible intimacy and the totality of a practice.

With more exhibitions on the horizon, can you give our readers some clues to what they might expect?

You can expect to see paintings... and I imagine that there will be works on both a bigger and smaller scale. I’m working on new work in oil, in acrylic, and embroidery. There’ll be very abstract works and also representational works including portrait painting, still life and perhaps some allusion to landscape. The paintings will most likely be very flat, and sometimes they will be shown behind glass. 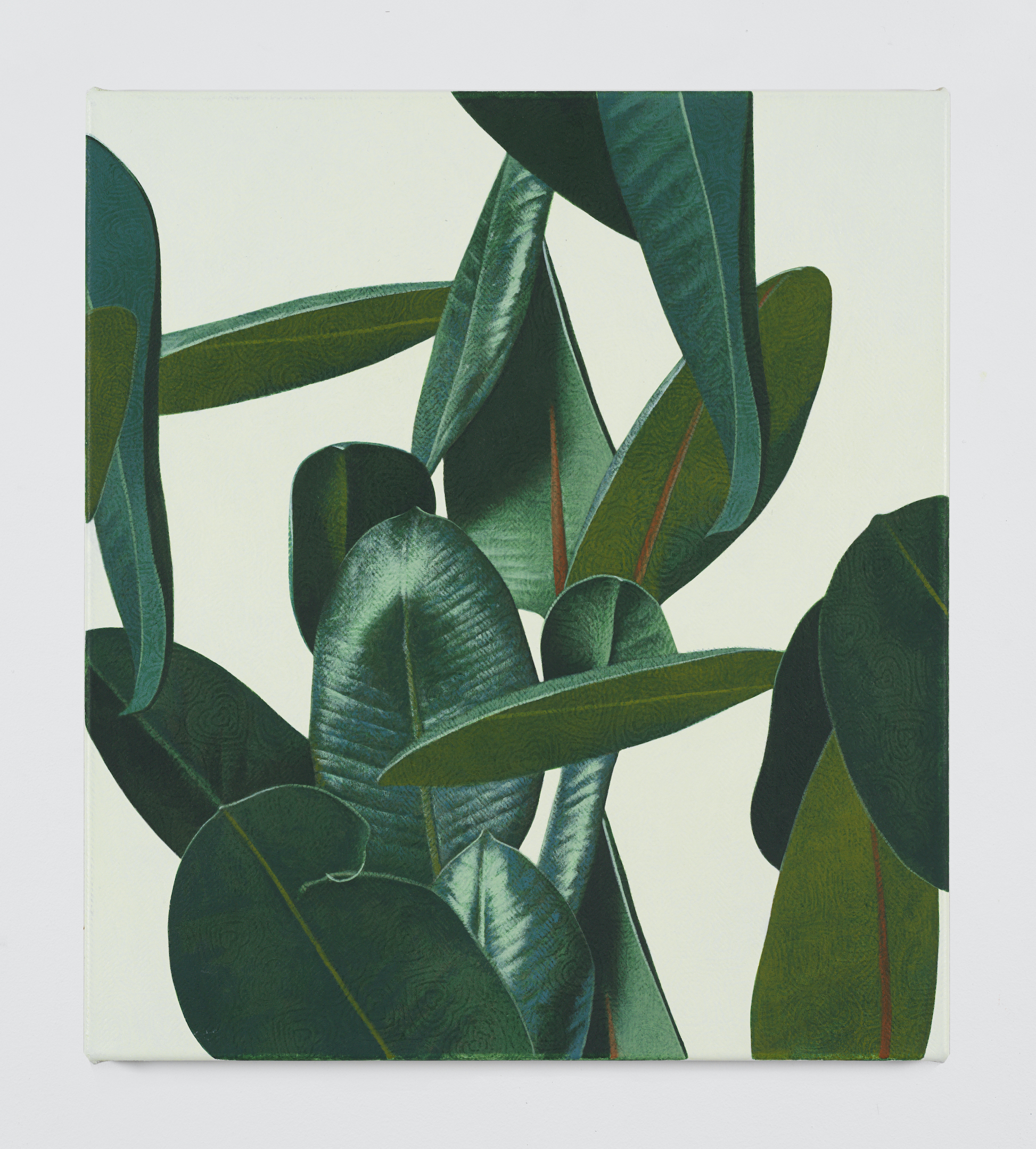