In the Studio with Michael Andrew Page.

In the Studio with Michael Andrew Page.

Your current show PYGHTLE at Project Native Informant in London has received wide acclaim since its opening, was there a specific concept for this show at all and how did you plan it?

I tend to make a group of works that share formal characteristics such as scale, surface quality and material. Regarding PYGHTLE specifically I wanted to produce a clean series of works whereby the show acted as a marker of time rather than a concept due to the works being a continuation of a series. It was also the first time that the works would be viewed physically as opposed to online, so for me it felt important to allow for the works to speak for themselves. One starting point was the communal functionality of contemplative architecture and opposing forms, such as the Bivvy (single person tent) as the antithesis of the Gothic vernacular. Representations of, and the philosophical history of contemplation has been important to the practice over the past few years, especially architectural forms that invite such acts, no matter the grandeur or lack thereof.

Where did the show get its title?

I’ve always been attracted to the use or recirculation of lost words, partly due to their linguistic visual functionality. PYGHTLE refers to a small plot of enclosed land, or the old Saxon verb “to pitch”. I had a shortlist of words; however, this felt the most appropriate as I enjoyed the double entendre of it being a geographical description and a verb. The words all share deeply personal connotations, but most importantly I like how they operate similarly to a film title or band name; I hope the minimal context invites them into becoming symbolic of the work itself.

Do you have any specific expectations of what you hope the viewer will interpret when they first view your paintings?

I rarely hold firm expectations upon the viewer as nothing is imposed besides an aesthetic, however I do hope that a viewer’s immediate take away is space and fetishized surfaces. The work deals with nuance, or biographical nuance to be more precise, and therefore feels highly generous in terms of how the work can be emotionally engaged. I hope to provide the viewer with a logical generosity, and that they approach the work with the same curiosity I had whilst producing them.

Part of you process involves the utilisation of digital techniques and programmes such as CAD can you explain a little what first drew you to their use and how it has helped your practice.

The initial utilisation of CAD was born out of pure pragmaticism and streamlining the practice. I was drawing each tensile structure by hand, shifting a drawing just one degree took hours of mathematical plotting; CAD presented an opportunity to solve those visual problems instantaneously. Working in the digital space with the intention of moving towards the analogue presented opportunities to push the visual development more rapidly. The first iterations of the bivvy works sat on my hard drive for perhaps a year before I finally succumbed to their desire to be paintings. CAD helped realise an abundance of options swiftly, but it was itself a technology that had to be
learned, and so that struggle certainly imposed a renewed sense of authorship over the images. As I moved into painting we were slowly emerging from lockdown. Looking back at in-progress-photos of the early works I can see how hard it was to formally translate the images. Coercing the paint to mimic the three- dimensionality in a physical manner became the agenda, in that the mimicry of painting mirrored the building of the objects upon the two-dimensional plane.

You also have a very specific technique involving cyanotypes when transferring a sketch / mock up to canvas. Can you talk a little about around this process also?

I was looking for a means to transfer the image accurately to the surface, ideally avoiding anything digital. First I drew the images on with the aid of a projector, however even that process posed problems with maintaining geometric accuracy. Minor vibrations from the projector made the image very hard to read at such proximity, and
frustratingly corrections had to be made following the initial drawing. Cyanotype had several advantages, its immediacy and speed proved the most valuable practical features. As I learned how to layer on top of the cyanotype, I also came to realise the pictorial values it added to the surface. Historically there’s a huge relationship between the digital and the manual within my practice, and so the cyanotype posed intriguing aesthetic dilemmas. Navigating these brought the works into a more painterly relationship with the notion of representation. It moved the image away from rendering and into a more complex relationship between the hand and the image. I think that at first glance, it seems the cyanotype was intended to remove the hand even further; far from it, principally for me it was pure pictorial information, go here, do this, but now it’s feels as if it’s pushed the cognitive process towards lateral decision making. This oscillation continues to generate new approaches to the paintings.

What informs the decisions you make in terms of colour and the palette you employ, specifically in these most recent works?

Occasionally there are very specific combinations taken directly from source material, but specifically with these works it was more about a general balance across the whole body of paintings, intuition played a more central role. The colours that come from sources are often simply combinations that for me operate as a form of
identification, like a club badge or stripes. They vaguely act as a fanatic way to quickly enter a kind of undisclosed psychogeography. Currently within the works I’m developing in the studio colour is specifically being placed under much more scrutiny. The source material is more dominant, regarding both historical references and more recent personal histories. I’d like to play with that psychogeography more directly, much like the forms which purposefully play with conjecture, I want the colour to be subjected to a similar rigour.

Your practice and the planning of your paintings encapsulates a very research-based approach to the work, where do you gather source material and how is it utilised?

The research has a duality whereby one interest informs the other, so much so that it’s become difficult to locate where and when this research began. At some point an object is identified, that object commonly tends to be something that represents a personally relinquished activity, often something that can take various forms through
modes of customisation; to a certain extent its immediately symbolic. The research feels more concerned with understanding a philosophical positioning and the mechanisms I can deploy, aesthetically and conceptually. I think that the combination of the fanatical and the philosophical is why I read a lot of 16 th century antiquarian texts. John Leland, one of the earliest and most underrated of all the antiquarians, died in pursuit of his obsession to itinerate the country of all its curiosities. He carried out his methodology with a precise humility. I find that approach to personal history intriguing; processes that bare more in relation to song writing than it does
to say anthropology; there’s room for romance. I spend a lot of time looking at renaissance drawings, in particular the drawings of Jacopo Bellini. His ability to spatially play with contradiction and visual hypocrisy keeps you on your toes. The manifestation of those features in generating personal and almost un-scientific variants of a place has always been a goal within my own work. All this stuff simply enters the work through activities such as collecting and cataloguing. As the visual vocabulary expands and is experimented with, the less one becomes reliant upon source material. That’s when the work begins to get exciting, it only feels as if I’m stepping into that space now. I think the very nature of a practice is that it is accumulative, even when you shift from one delivery method to another, it’s not only about the immediate but also of that which has come before. Now the research is a supplement to the work; it informs an infrastructure of thoughts rather than didactically validating content. This facilitates the state of otherness in the work which in turn signals whether or not a work is finished.

Drawing is also important to you I believe, Will you draw anywhere, or do you have to be in a certain mood, place or time?

Everything pretty much derives from drawing, be it analogue or digital, there’s always something in production. When I was a student, I struggled to form a relationship with painting because I always felt that drawing provided me with what I was looking for, whereas painting felt infinite and hard to enter, hence why it was such a big personal moment committing to these paintings. I never draw “on the go” unless it’s just something notational. The drawings require quite a lot of care because they are done with pigment ink on drafting film. They are a conglomerate, approximations, prosthetic, cannibalistic variants reliant upon memory and conjecture. They exist on a plane that is purely imagined, arbitrarily poised in empty panoramas, however constructed in firm mathematical boundaries. They are important because they establish two things; Firstly, the geometric principles by which the works are formulated upon, and secondly the relationship between me and the object.

Do you have a studio routine at all?

I always start the day early walking the dog, I really hate missing that time outside before the studio day begins, it resets the mind and body, especially given that the work puts my body under a lot of stress as the works are made flat. In the studio there’s probably the perception that it’s really calm; it’s a ruse. It’s headphones on, full volume death metal; I need that immersion to focus, so in many ways there’s an alternate reality in the studio; the real one exists clandestinely.

What is it about being an artist and the act of creation that you love?

The freedom to be curious.

Finally, what are your upcoming plans?

I’m currently planning for the next set of projects upcoming in 2023. I’ve taken some time to digest the last few projects and how the work can be scrutinised and developed; there’s certainly some exciting new possibilities emerging. It’s been a busy year so recently I’ve been taking the opportunity to consider how the studio can operate more efficiently, buying new furniture and giving it the once over. 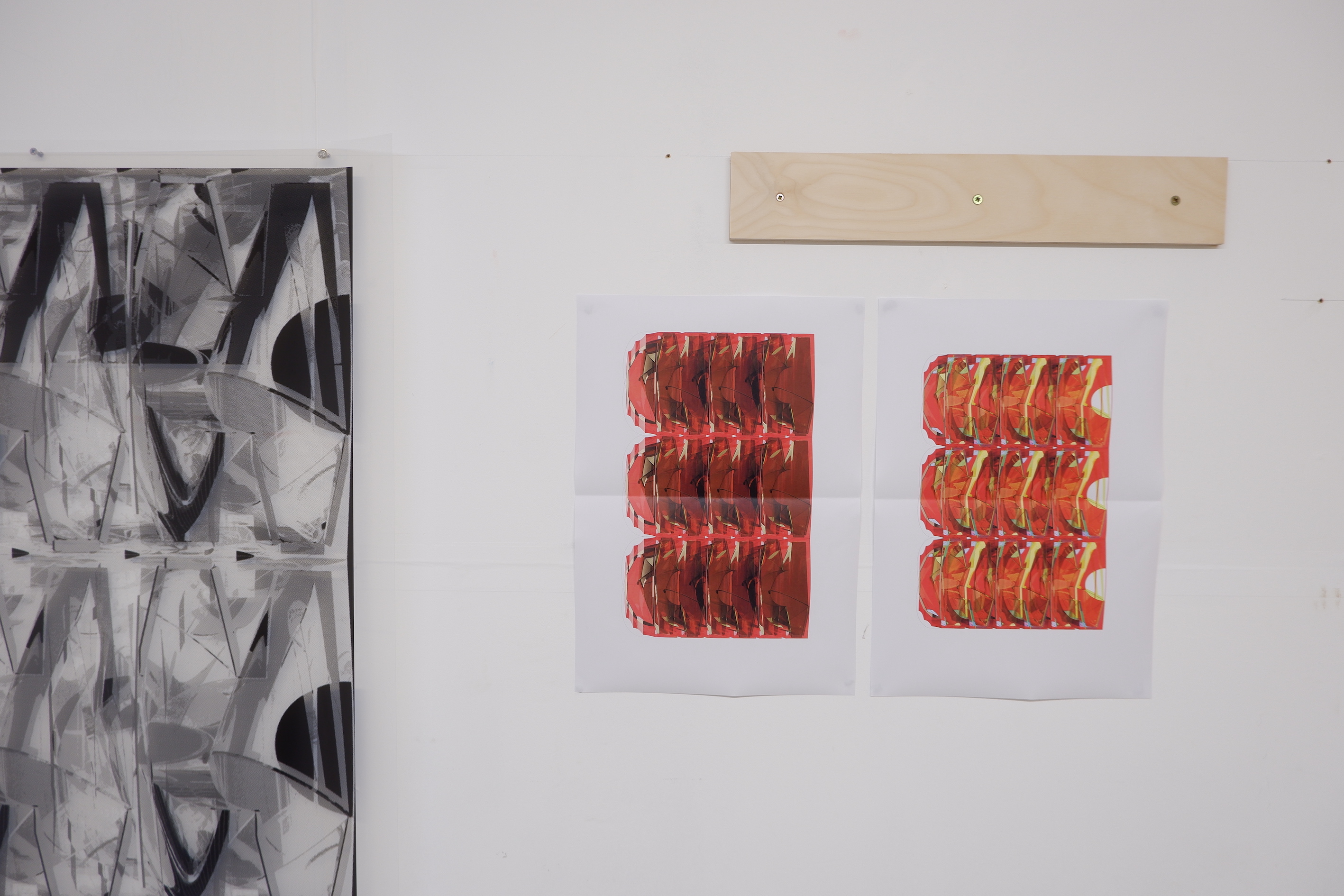 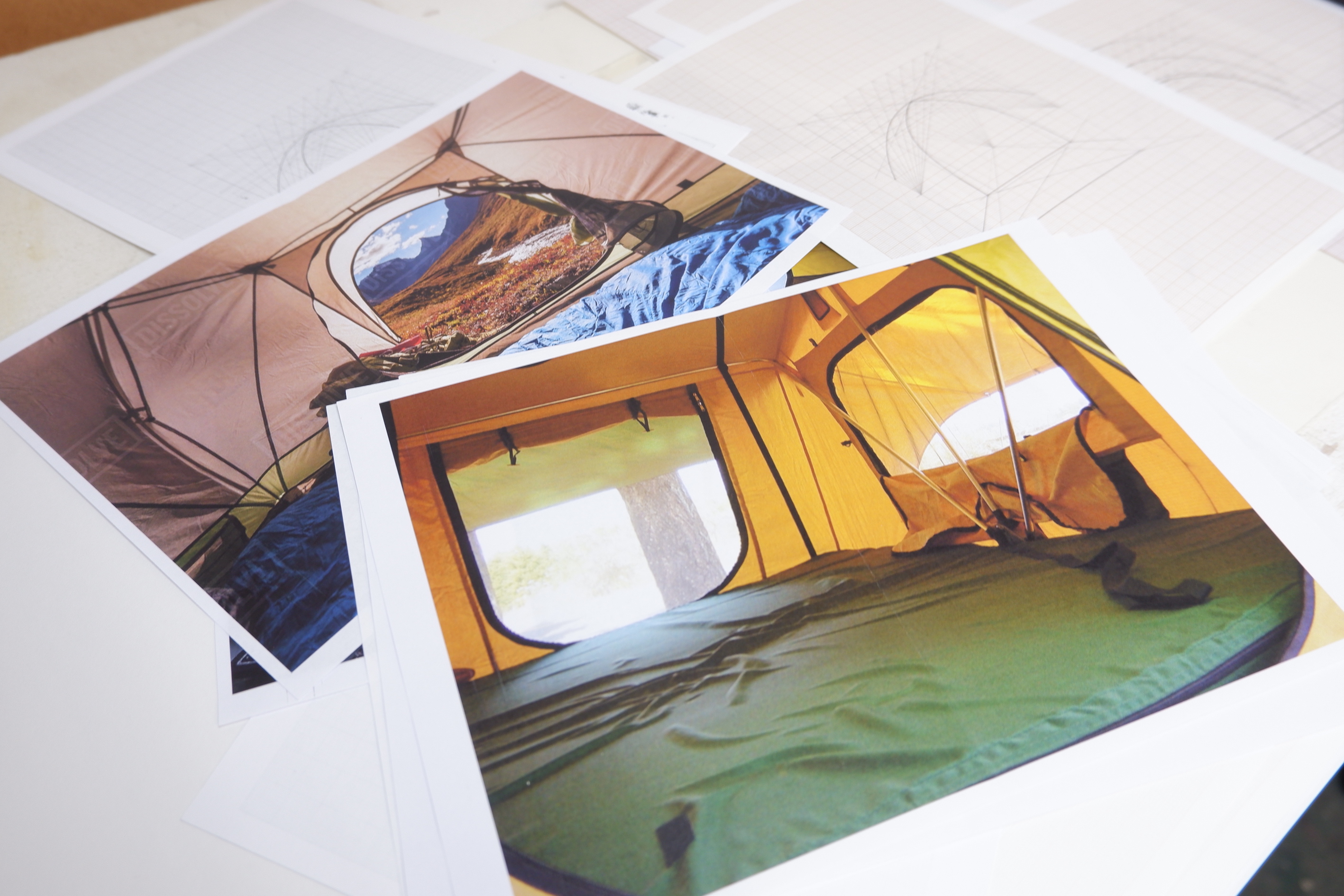 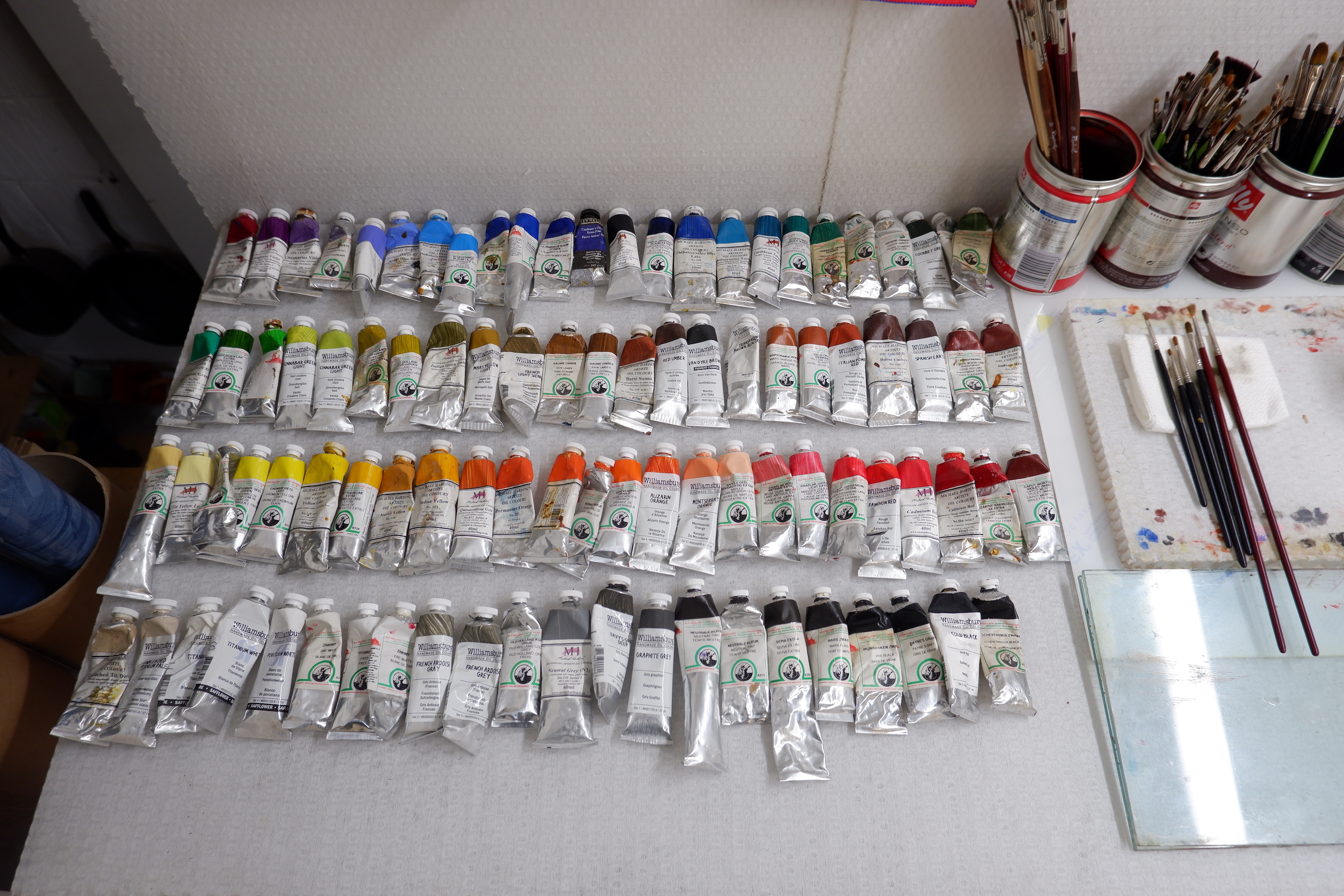 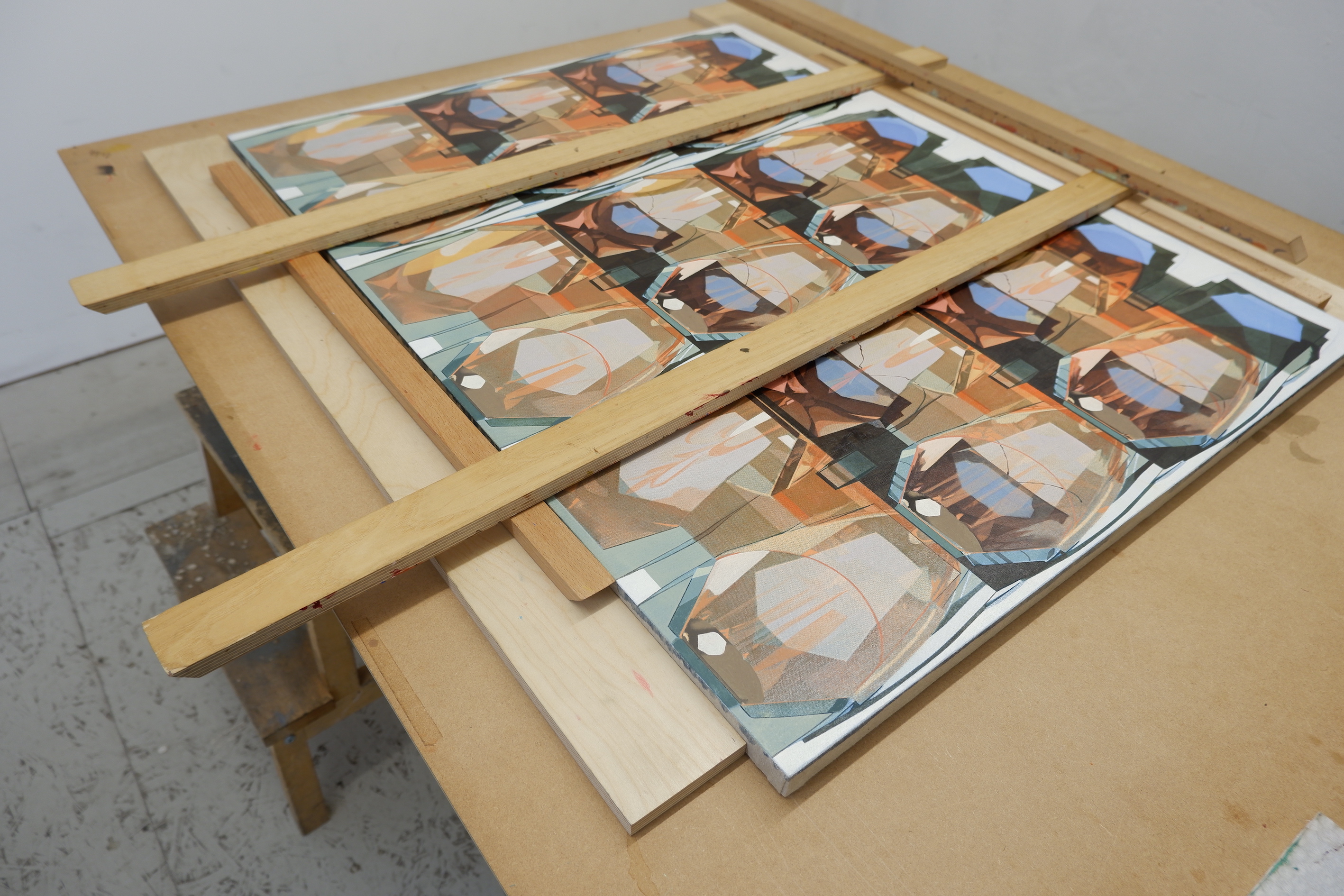