In the Studio with Martin Llavaneras.

In the Studio with Martin Llavaneras.

What are you currently working on?

I am working on a solo exhibition that will open in February at Centro Centro, Madrid. This will be a continuation of my recent exhibition ‘Delta’ at Intersticio last summer, for which I presented an installation of a sand castle with bird nests attached to one of the columns of the gallery space. At Centro Centro, I will have a new body of work made with the technique of chromatography. Using different sands I collected from Barcelona´s port, I mixed these with food colorings processed in Mercabarna before applying it onto the surface of a paper. The solution classifies each material depending on its physical composition and arranges them into different layers, creating a pictorial image of a gradient. This process creates a micro image of a Delta, as a space that is constantly distributing and retributing materials. I am interested in how these images activate a pictorial perception from a 1:1 scale position in relation to its surroundings. In other words, how the physical arrangement of sediment displaced by a flow presents the logistic activities in a territory.

‘Delta’ was the title of your recent solo exhibition at Intersticio gallery in Madrid, which also alludes to an area of land where a river has split into several smaller rivers before entering the sea. Could you talk about this idea and how you developed it for your show?
‍

A Delta is an area of land where a river disposes of carried sediments and the sea engulfs the water, in a tension between two marshes. However, the sea also brings boats in, and there is a logistic system of ports and airports, which resemble the idea of birds carrying materials from one site to another. I was drawn to the geography of a delta, understanding it as a cognitive space where the same ideas of capitalism of manufacturing and distributing materials or information take place. The installation of a sand castle with nests in one of the columns of the gallery space reflected the airport’s subtraction of bird nests. Therefore, the circulation of materials in the land area of a delta reflects the imprint of our movements on and relationship with the environment from a capitalist perspective.

Your works resemble traces of the abandonment from nature and imprints of a workforce of man. The first time I saw your work was in your solo exhibition ‘Fruit Belt’ in 2017 at Espai 13, Fundació Miró, Barcelona, where you made an installation of a microclimate which, through an irrigation system, controlled the breath of apples by manipulating their natural process of degradation. You work with elements that are directly linked to rural life. Why are you attracted to nature, and what continually raises more questions for you to keep investigating?
‍

When I started working on ‘Fruit Belt’, I had just moved back to my parents’ house in Horta de Lleida from Berlin. I was working at my family’s orchard everyday and there were a lot of elements in nature that shaped the installation I made at Fundació Miró. Being a creator is very different to being immersed in the processes that are already taking place in nature. By understanding these processes, we enter into a much more global and systemic consciousness that goes beyond the gaze. I try to see my work from this prism. On the contrary, Land art artists would take a site from nature and codify it, but the act of mobilizing a machine through a land to produce a work is already generating footprints, therefore, a register. I’m not interested in creating a representation of something since we are constantly leaving footprints and producing images that underpin all these processes to adapt the world to our own interests.

Could you talk a bit more about your creative process for ‘Fruit Belt’ at Espai 13?
‍

At the time I had that show I was trying to understand the new materialisms inside a system of cognitive information mediated by devices that make the whole flow of information possible. It made sense to link that to the agricultural activity of food production, focusing on the idea of sugar, as a logistical procedure related to the artificial manipulation of food aging, as well as with some of the residues these processes create. My whole family is involved in food production and distribution logistics, and we have always talked about the harvest, the market flows, and the post-harvesting from producers to engineers’ perspectives.

How did these ideas unfold on the projects you did afterwards?

All the works have a circulation from one another. For the show at Fundació Miró, everything was about the processes of goods production and the whole network of logistics and its impact on production. For the show at ‘La Capella’, 2019, I made an installation of castles of sand which I integrated in the architecture of the space. It was a project that explored the circulation of sand as something disfigured and latent, because it is a material that isn’t either what it was, nor what it will become. I wanted to claim the figurative potential of the sand at a time of transition before it would become pavement or glass. I always find figuration through the use of materials I select and sandcastles talk about a lived experience of making and undoing, activating a perception about the temporary nature of the images and the environment itself.

the materials and its cultural connotations define the work as well as the discourse that you evoke. Could you talk about your personal interest that led you to work on the idea of ‘Delta’?

‘Delta’ was the result of my previous projects that I conceived from a certain topographical awareness. I had previously made a fruit production field irrigated by canals, and a canyon flooded by a hydraulic dam afterwards. I would say that the dynamism of water has taken the central motive in my work, as a kind of snake biting its own tail where materials enter and leave, are distilled, and amalgamated. These dynamics make the flow of water possible, which I find fascinating for its continuous physical flow of information.

What interests you about installation?

I find interest in adapting an architecture to a context, and how this adaptation is something fluid. Sculpture is a practice of flows in constant displacement and contradiction. There is always a tension between ideas and facts, and you decide when you want to lie or let yourself go. We can make sense wherever we look, but there is a moment when you have to question yourself whether you want to find everything you are researching, or whether you want to hack an idea and do things you can’t control. Sculpture and installation have the potential of not knowing what the configuration of materials will generate. The medium has a lot to do with morphogenesis, about how a form develops and, during that process, giving it all sense. But is there a prior meaning? I reckon configuration acquires meaning at the same time as it acquires form through the influence of experience.

You select parts of nature because you find an aesthetic interest in them. Could you talk about how you create the reliefs of the plates made of thermoplastic, as well as the bird nests?

The plates appeal to cyclones of gales where leaves fall off the ground and are piled together. I use relocated leaves I collect from different parts of the city to create a relief onto a thermoplastic plate through heat. During the process of collecting these leaves, I cycle around the city where I perceive different vegetable patterns in offices, gardens, houses, or restaurants, that might then influence the composition of the leaves in the studio. Each movement leads to another, which makes the whole process build an area of investigation. The same happened with the bird nests for ‘Delta’; I ended up working with bird nests after my aunt came to my studio and thought that a sand sculpture looked like a heron’s nest.  I then asked her to bring me any abandoned nests that she would find by her fruit trees, which led me to develop the idea for the show.

What would you say is your main motivation that keeps you investigating?

What draws my attention is on how to dissolve the artistic consciousness inside the dynamics that happen in a context. The difference between a stone and a work of art is purely contextual; we are constantly willing to subject reality to an analysis, from the self as a subject who is able to generate the right situation to create the representation of the current state of affairs. I make works to understand the processes that take place on a global scale and that the art system follows. I make works to be infiltrated in a flow that is producing sculptures, in order to understand the elements that measure my reality through moving materials from one place to another.

Do you think the viewer of your works has to be conceptually aware of your codes?

We are talking about a hyper-coded work at a very specific time, which requires specific readings, but at the same time I can’t talk about the materiality of the world without realising that I am imposing a discourse on a material system. This is the problem I find with many artistic practices, which always have to justify their materiality through a speech. I am doing it now, and there is a field where viewers need to contextualise my work, but once they know the codes, everything is open. I do not believe in a closed field body of work and I prefer to be immersed in the process of making, which constantly raises doubts.

Maybe instead of castles, I am interested in towers. The region I am from, historically has always been on the fringe between two territories. There is a linguistic and territorial degradation, which I find very interesting as a space for dissemination. In the middle ages, it was an area that delimited the Arab conquest through a configuration of towers. The contemporary version of these towers/castles are industrial factories, with chimneys expelling smoke and steam, as centers that control the movement of raw materials and workers in the region.  I am interested in the vertical shape of a tower, as something that can be built as a common project. Otherwise, we are left alone, arranging images without a conversation. 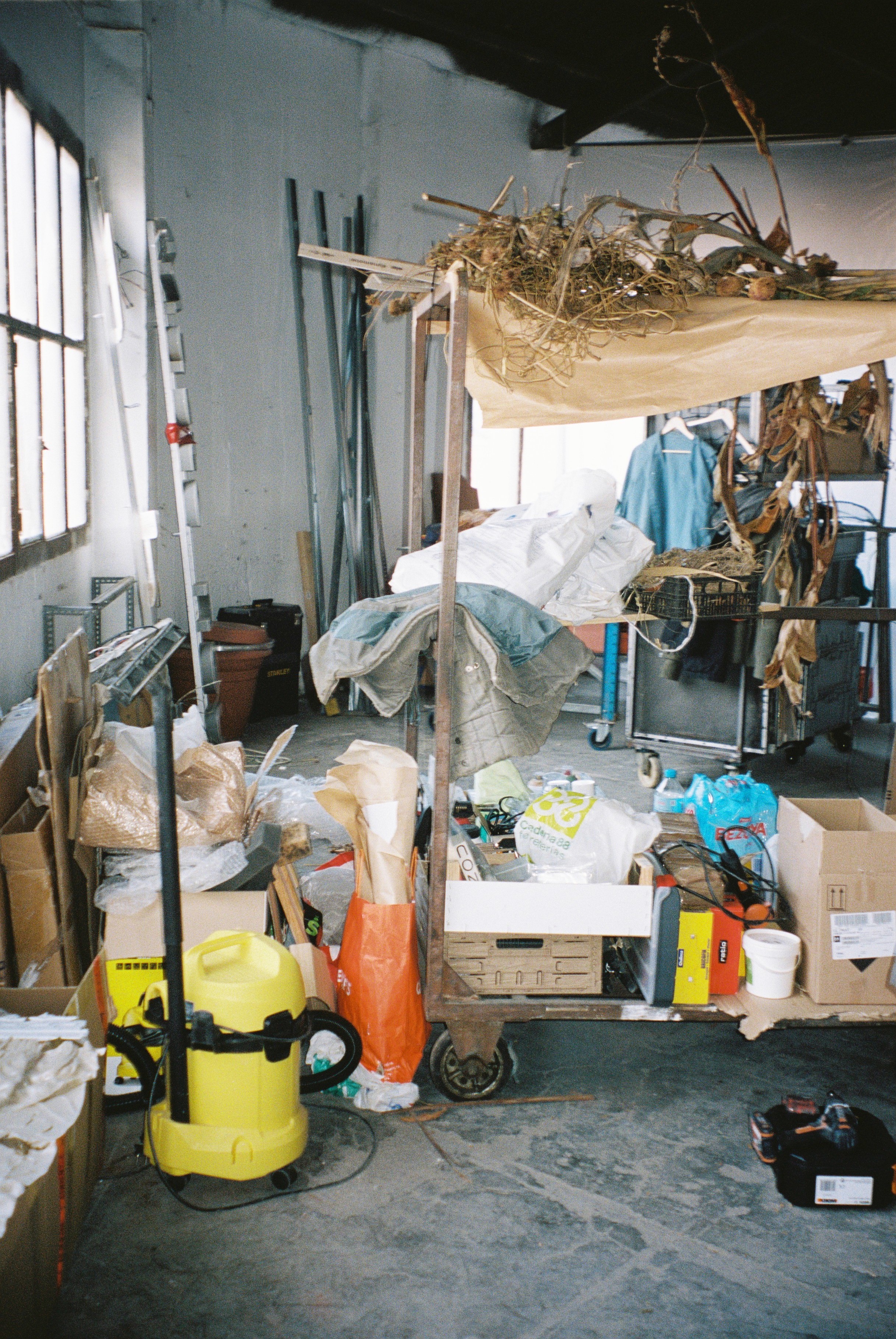 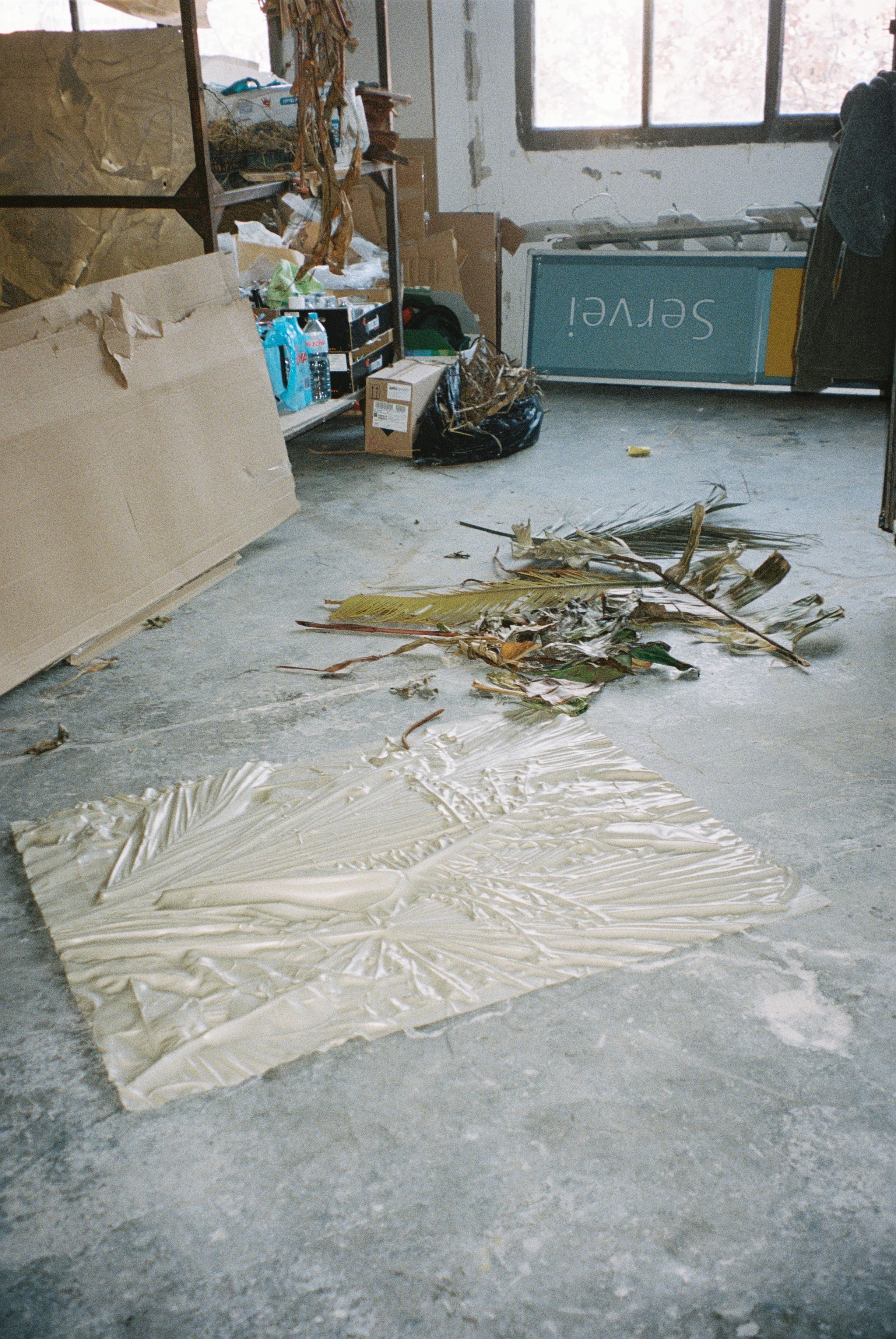 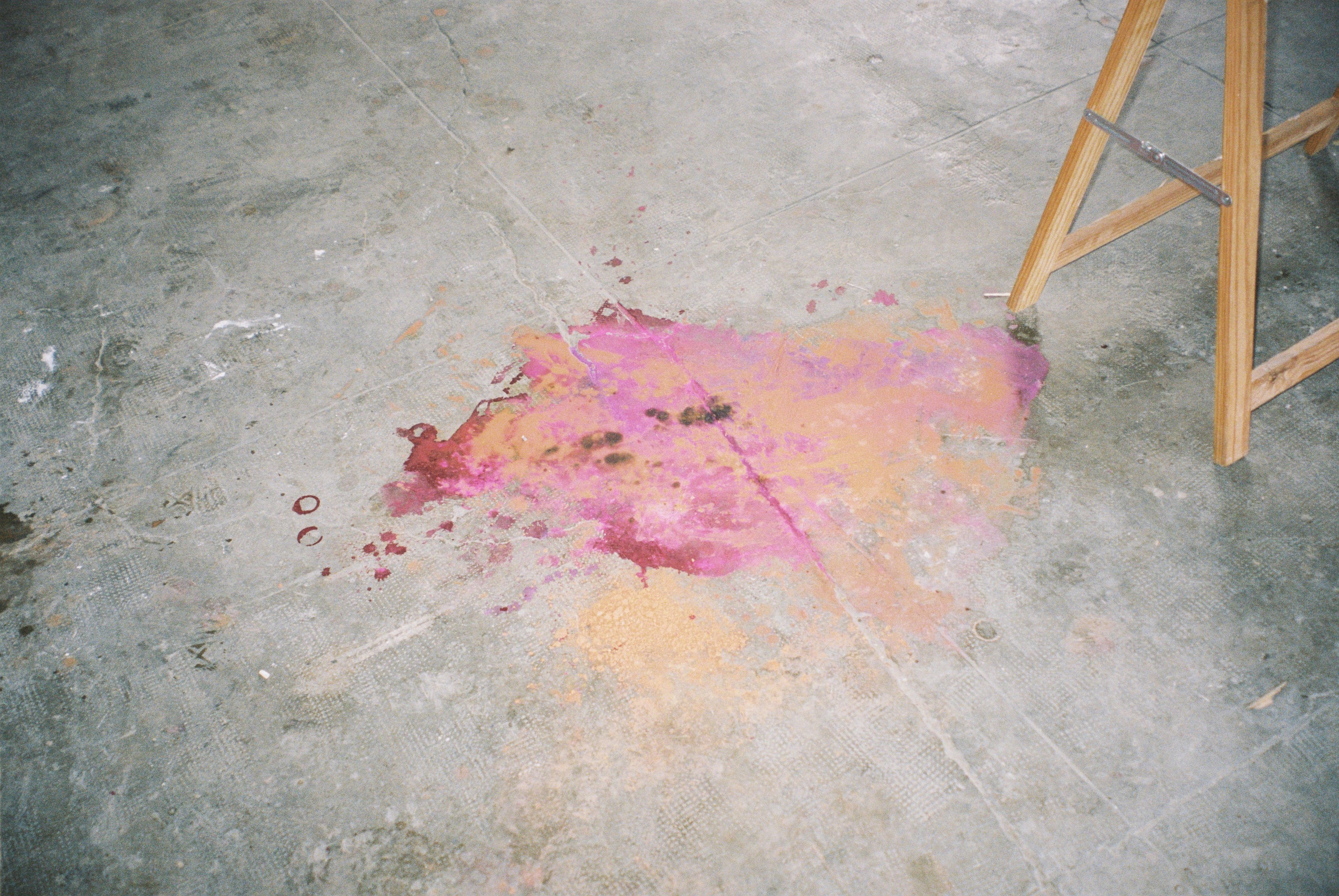 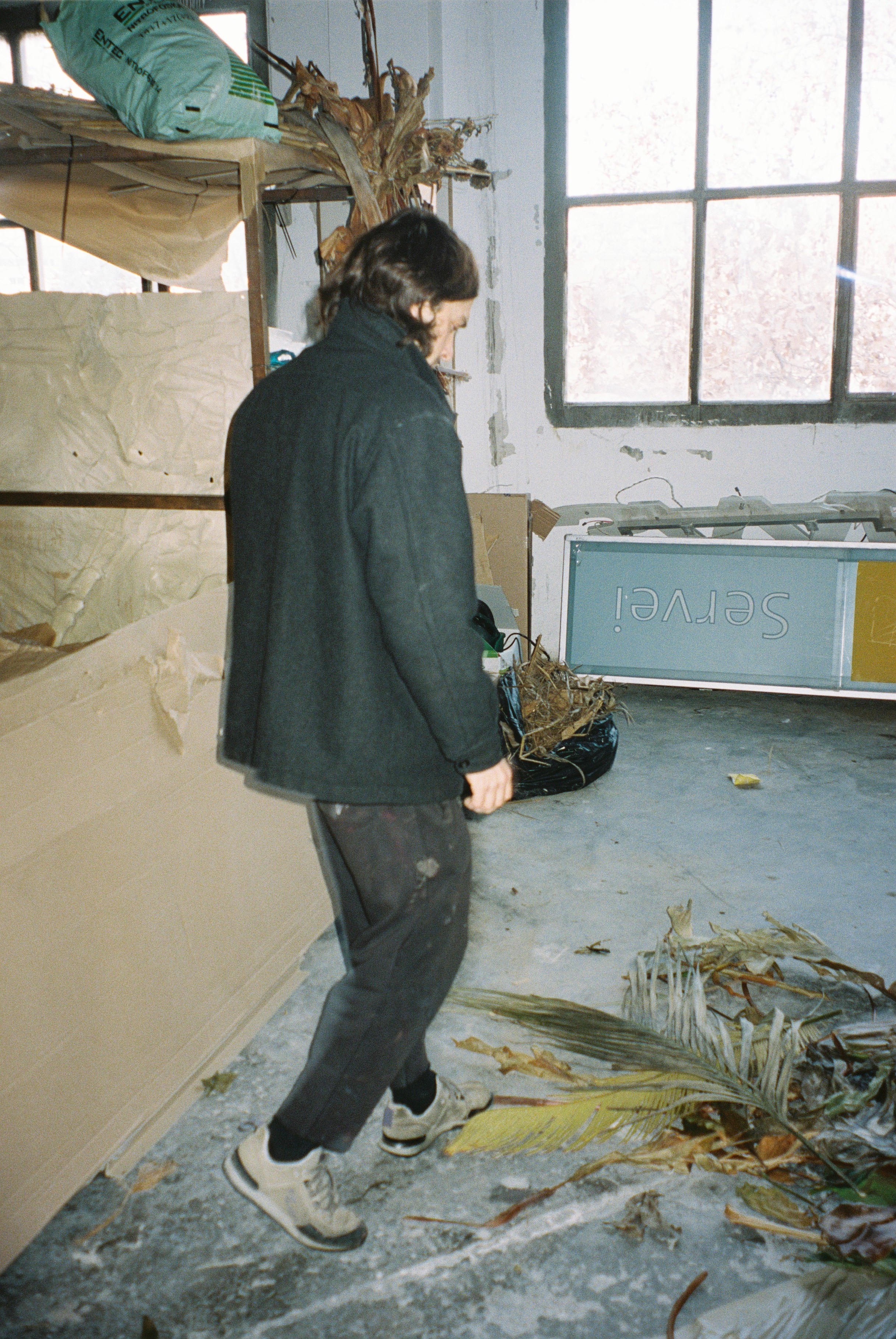 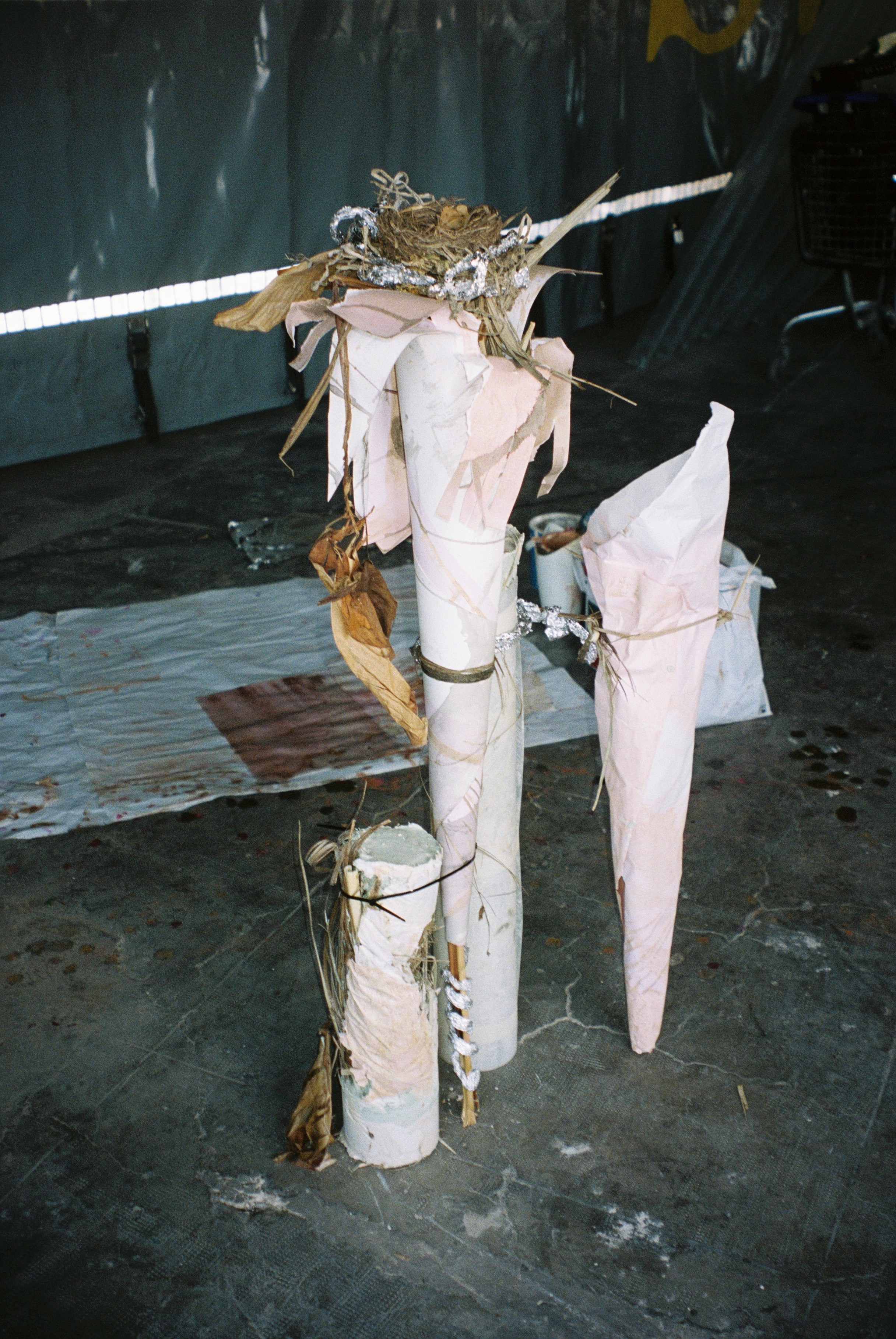 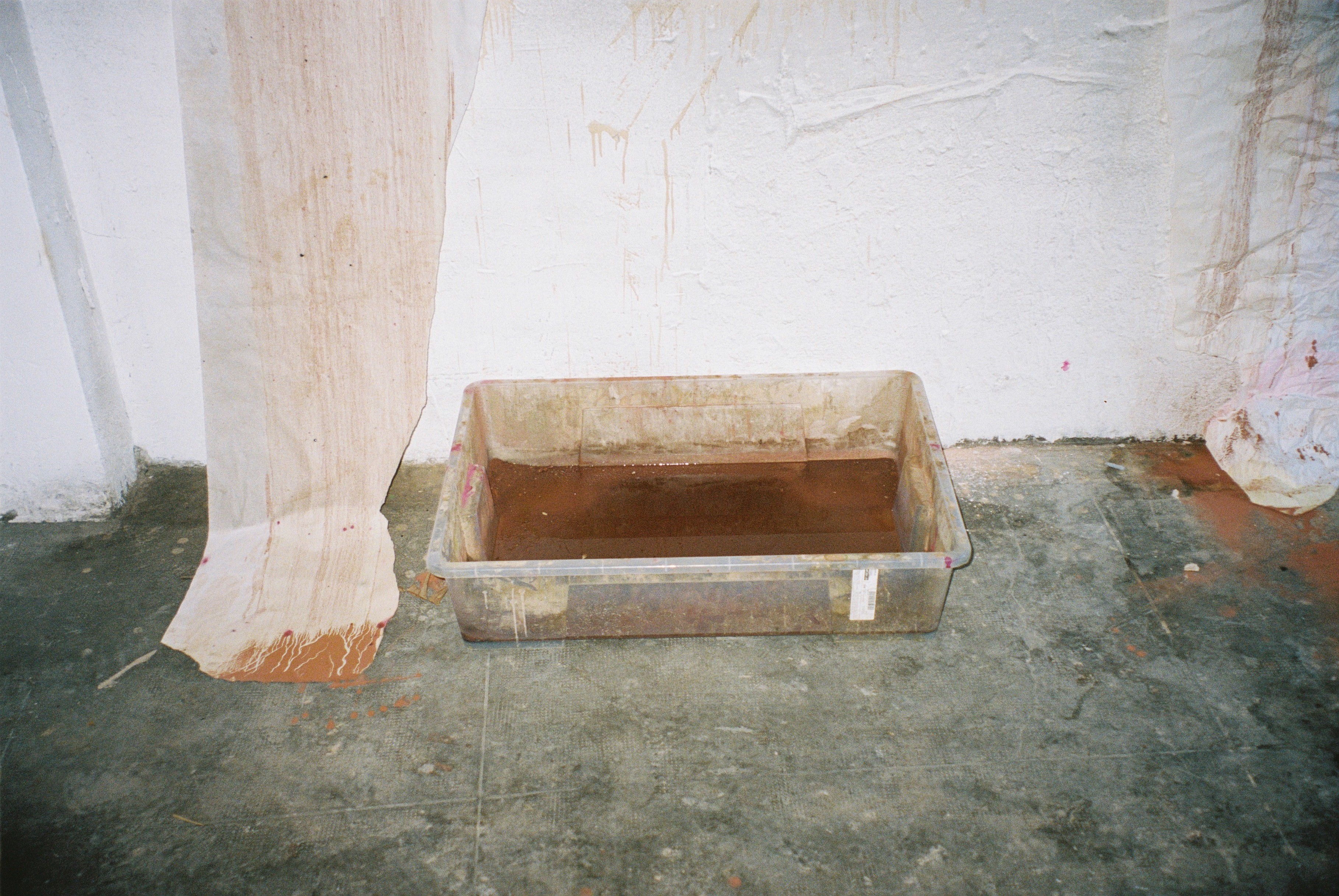 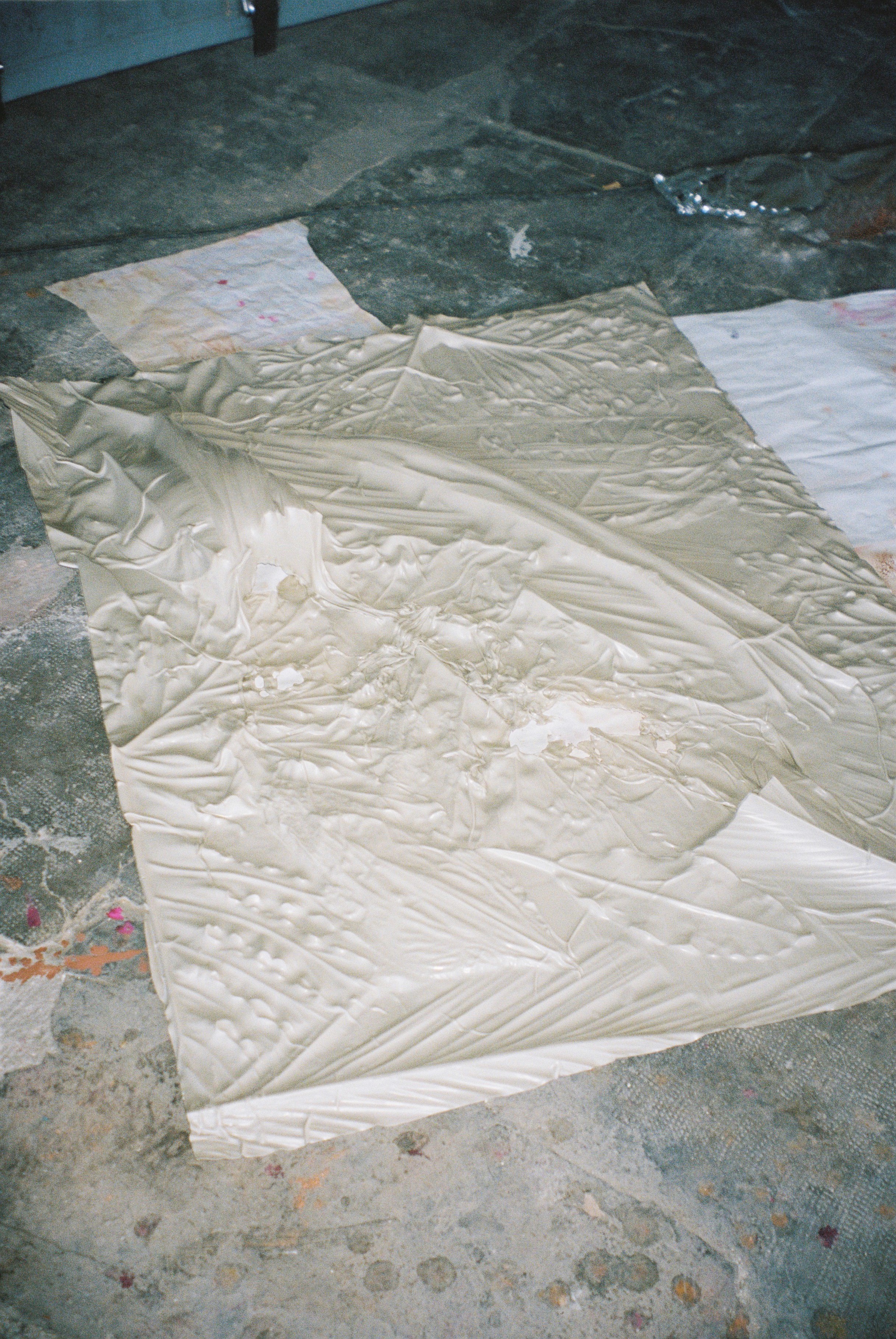 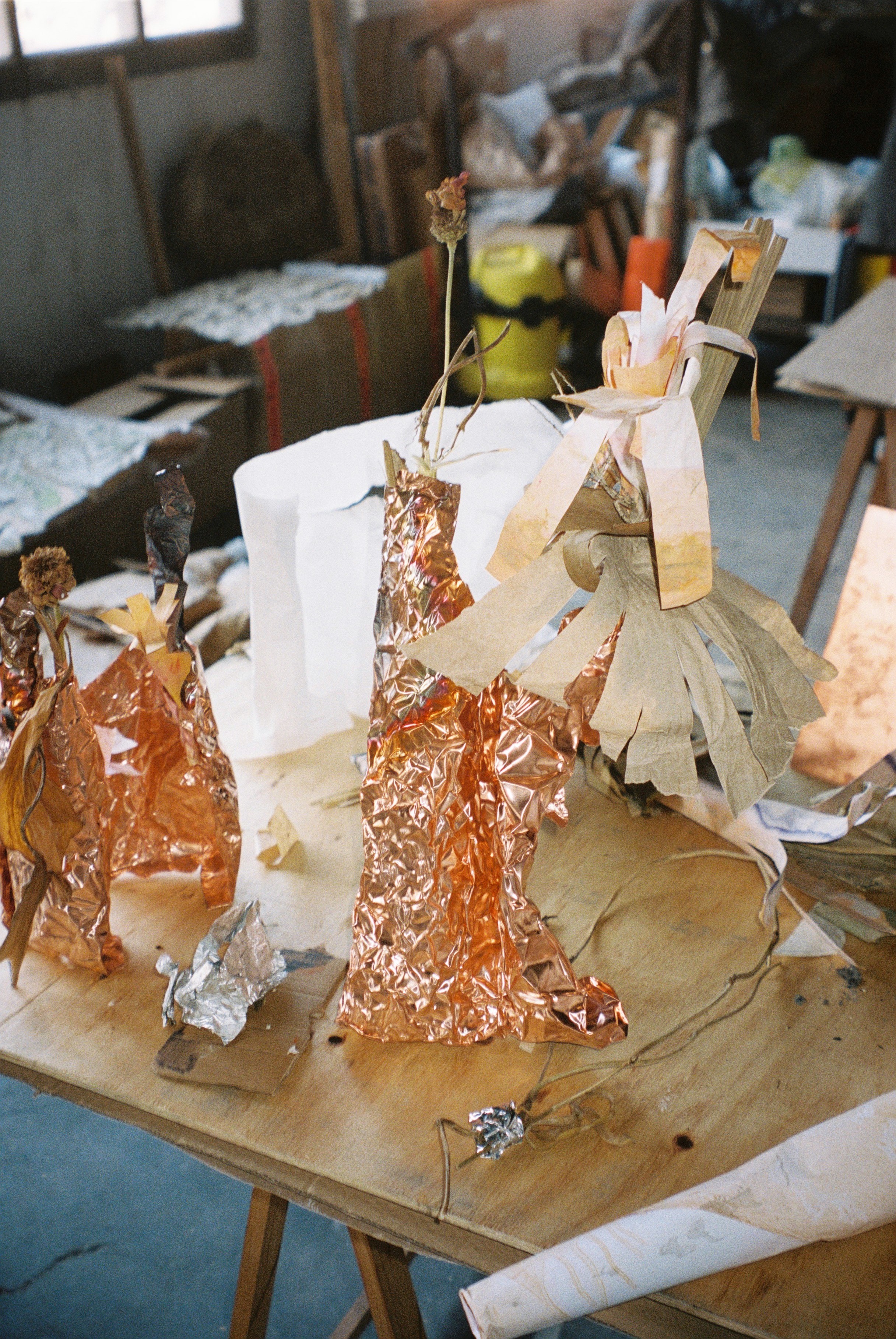 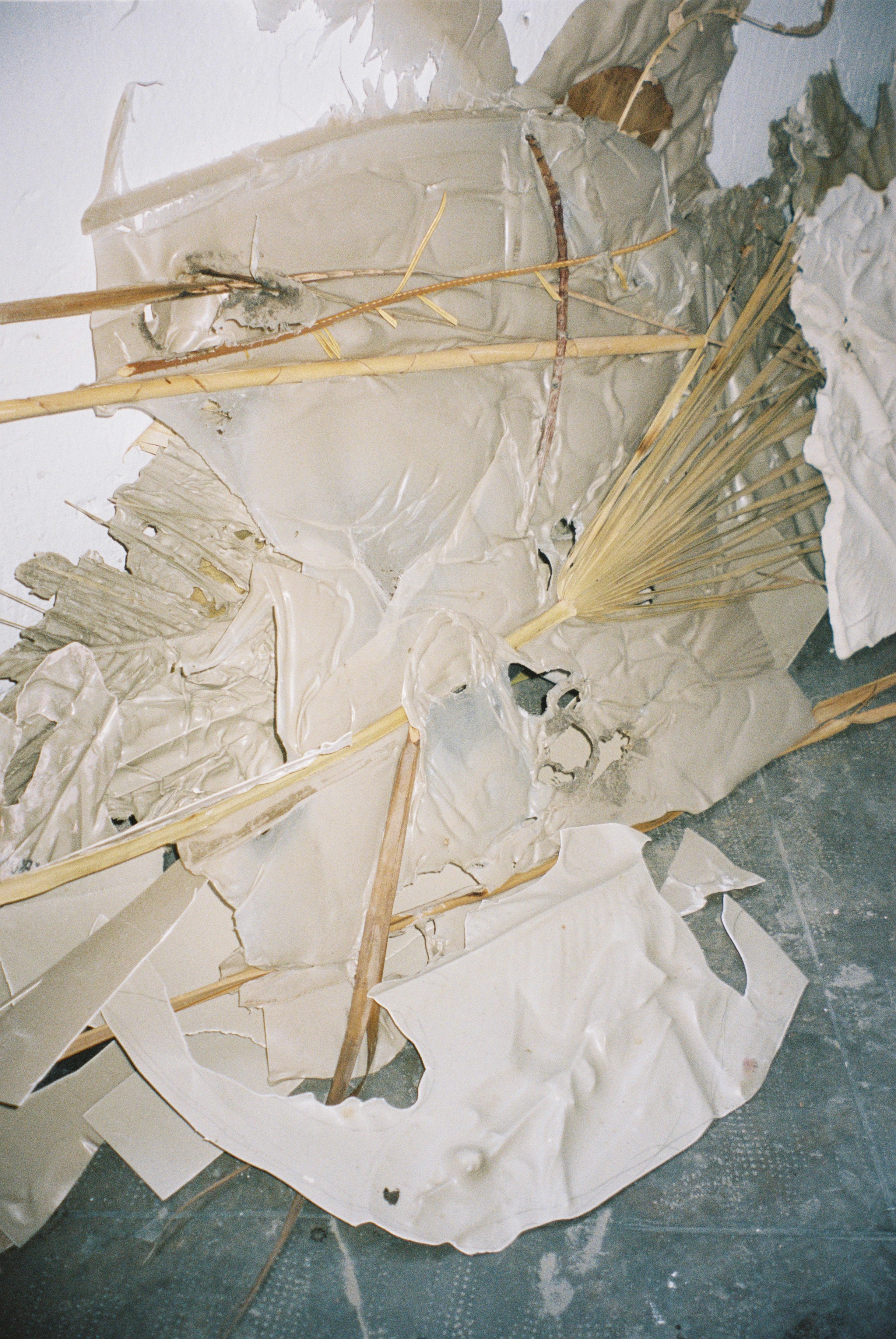