In the studio with Gal Schindler. Words by James Ambrose

After being part of the group show “after image” at MAMOTH, London. You now have an upcoming solo show at Longtang in Zurich, Switzerland. Can you tell me about the body of work you have created for this show and its concept?

The preparation for the show in Zurich feels as if the process itself is part of the final work. For the past months the curator, Ann-Kathrin and I have held an ongoing dialogue nurturing ideas and exchanging texts by Anne Carson and Bernadette Mayer to name a few, which will feed into a publication accompanying the show. It will act as an experimental piece taking a life of its own - A collective discourse between female artists and writers, exploring varying outlets of communication and multiple points of view.

I’m not sure if there is one specific or definitive concept for the show. Holding onto the verbal and the visual simultaneously, it will be dealing with thoughts around the fluid, the malleable, the innumerable. It will include new paintings and display structures customized for the gallery space.

It’s a really special project. I’m definitely learning a lot from working in the midst of a pandemic, embracing a new dynamic and an ever-changing reality, finding inspiration in the present moment not forcibly reaching completion. I’m excited to see how things will unfold.

You mentioned, during your childhood, you were constantly drawing. Who and what were your artistic influences throughout that time?

Having to complete three years of military service from the age of 18, I wanted to ask, how was this experience and how has it shaped you? Was your artistic output stifled at that point?

The military service is glorified in Israeli culture. It always made me feel uneasy and perplexed. It was an intense, complex experience and I had very little privacy, but I was drawing while on guard. It made me realise how precious time is and motivated me to push for what I want.

My dream was to go to Bezalel Academy of Art once I finished the service, although after being immersed in the political situation for so long it was difficult to see myself in Jerusalem. It’s a beautiful city, drowned in religion and tension. For me, it seemed impossible to make art there which wasn’t dictated by these issues.

At the Slade I made some works painting on my uniform’s fabric. I needed some kind of outlet for that, though as time went by it became harder to directly and genuinely address these topics, being far away from it all. I think those experiences will always be present in the work in one way or another.

It appears that drawing is still very important to you now. Where do you draw? Is it only the studio or can it be a spontaneous activity that occurs in any location?

Drawing is an intimate portal to freedom. I draw everywhere. Sometimes in the studio, yet I prefer to draw when I’m alone, at home. Hours spent in the studio are usually dedicated to painting.

Can you tell me a little about the process of your painting, how does the work evolve to the point at which you are ready to commence scratching your figures into its surface?

While the top layer of paint is still wet, I start. I like the ability to change, cover and re-work some areas in that sort of timeframe before the paint dries up and the image is ‘sealed’. I guess I’m trying to reach a balance with my ability to control and to stay open to the element of surprise.

Each work has a different rhythm, some can take weeks to become ‘resolved’ as the figure shape-shifts. I get excited when things go wrong and I’m forced to find new solutions.

Let’s talk a little around the palette you employ, what leads you to the colour choices you make?

I don’t really restrict my palette. It’s a matter of a trial and error and I go with my gut.

I like to look at colours in nature. I recently printed some pictures of sea creatures that may have filtered into my work – sea slugs and anemones, octopi, starfish... Maybe it’s an extension of my infatuation with the ocean, the inside, the boundless. Sometimes more specific - the red of the figure in ‘double negation’ came from an alabaster figurine of Astarte (The Canaanite equivalent to Venus), which has ruby stones embedded in her eyes and in her navel.

I read a quote where you stated: “I have this endless visual archive of pictures that I take and that I save from films or from the internet”. Can you expand a little more on this source material that you use, and what is the process of selection you make from it when approaching a new work?

I collect images as a way of constantly feeding my visual curiosity. It helps me to understand where I want to go next. A composition or a sense of movement can initiate a painting, although it happens very quickly, I lose the original reference after I get what I need.

There is no conscious decision... I guess I stop once I feel that I’m interested in the character. It can be frustrating when they come out as too spooky or too pleasing to look at - but yes, I need them to carry some kind of eeriness otherwise I tend to get bored.

Your figures tend to face the viewer. Do you want these characters to confront the viewer in some way?

Not always – some of them are looking outward, avoiding eye contact or just daydreaming, fantasising about a different world perhaps. But when they do stare right back at you, they judge, they seduce, they will take everything you have. I think they are looking through me first and only then they reach the viewer.

The idea of subtraction and negative space also play a significant role in the work. With your painted figures often sitting in a solitary state, existing in their own time and space. What led you to first depict them in this way?

Before working this way, I made paintings which had areas left ‘unfinished’ – the blank canvas and initial sketch left visible. I think I was struggling with the question of when is a painting finished and what does it really mean? I wanted to reflect positively on absence, lack.

Working through the paint before it was dry was serendipitous. A tutor noticed it and said my marks were about removal. I became a bit obsessed with the gesture of taking away, scraping and revealing. Using my ‘ruined’ hardened brushes, I started making figures that way, studying my own language. It felt like I was finding something that was naturally mine, that could go on forever.

The negative space is a powerful concept and I think it is very much needed in today’s chaotic climate, where everything needs to be available - on display, on-demand - consumable.

I love the title “Rivers of 1000 tongues” from your 2020 painting in the MAMOTH show, where did it come from? How do you get to the titles you give the work?

That title came about when I was reading The Laugh of the Medusa by Hélène Cixous. She urges women to use their own bodies as a way to communicate and to go against the oppressive nature of western ‘logical’ thought. She calls them to become more dominant in the field of literature by using their desires and to create their own language for themselves - ‘The language of 1,000 tongues which knows neither enclosure nor death. To life she refuses nothing. Her language does not contain, it carries; it does not hold back, it makes possible.’

The blue in that work seemed to me like a big fearless river so I’ve merged it together. If a title doesn’t come to me intuitively, I take words from songs, poems or books, anything that triggers me. I like to play with it.

You are currently completing an MA at the RCA. What are your plans post-graduation, where do you see your practice heading in the future?

These days it seems so hard to think long into the future or to plan anything at all. I want to take the time to make without much external pressures, trying new materials, surfaces and scales, and perhaps having more than one figure in each work. I’m curious to see how it will evolve!

What is it about painting that you love?

It’s is always there, wide open. It makes me feel safe to know my hands can make something come to life. It goes beyond conventional language; I love how it speaks without using any words. And although it is such a private, independent act, it has the ability to reach and touch everyone. 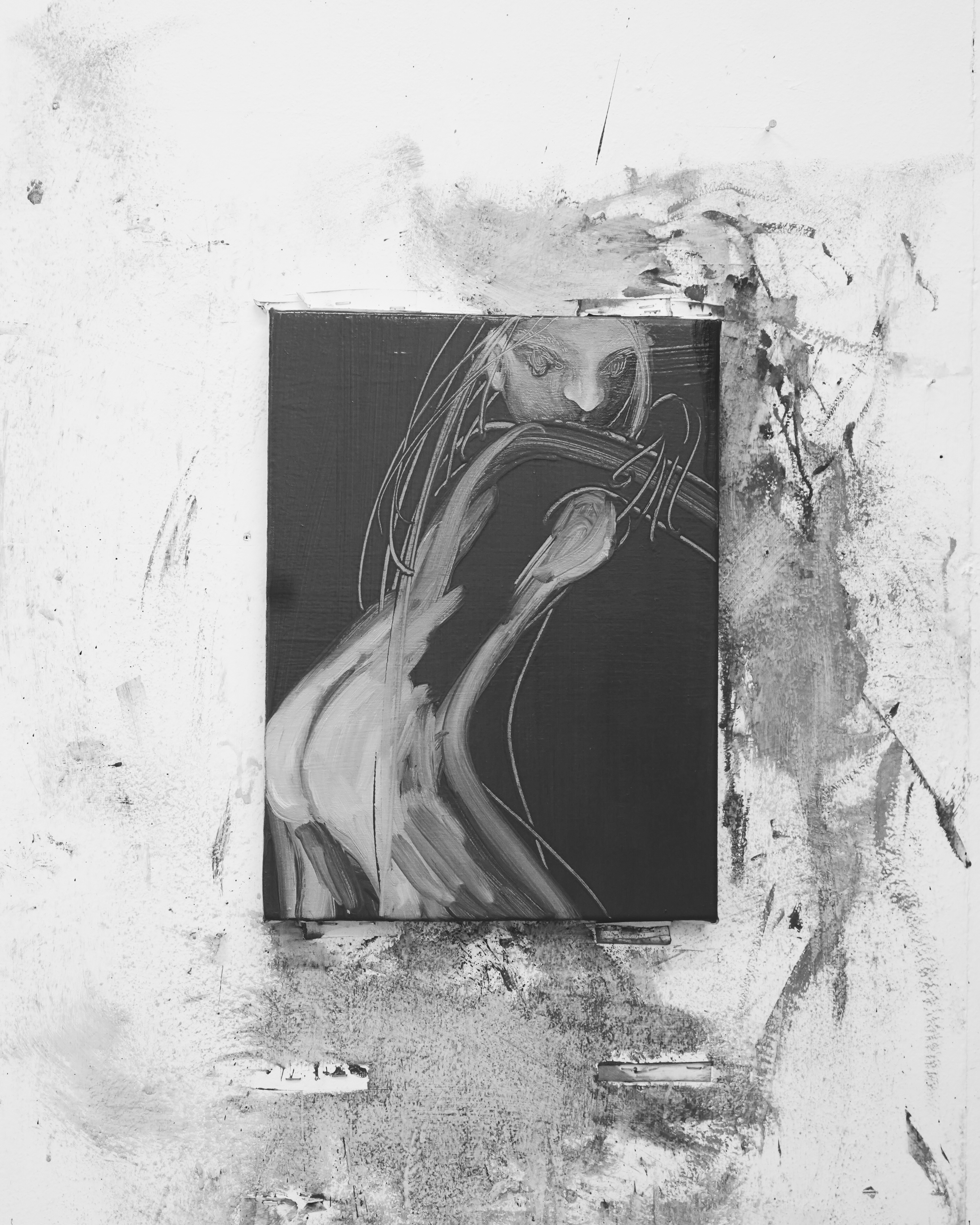 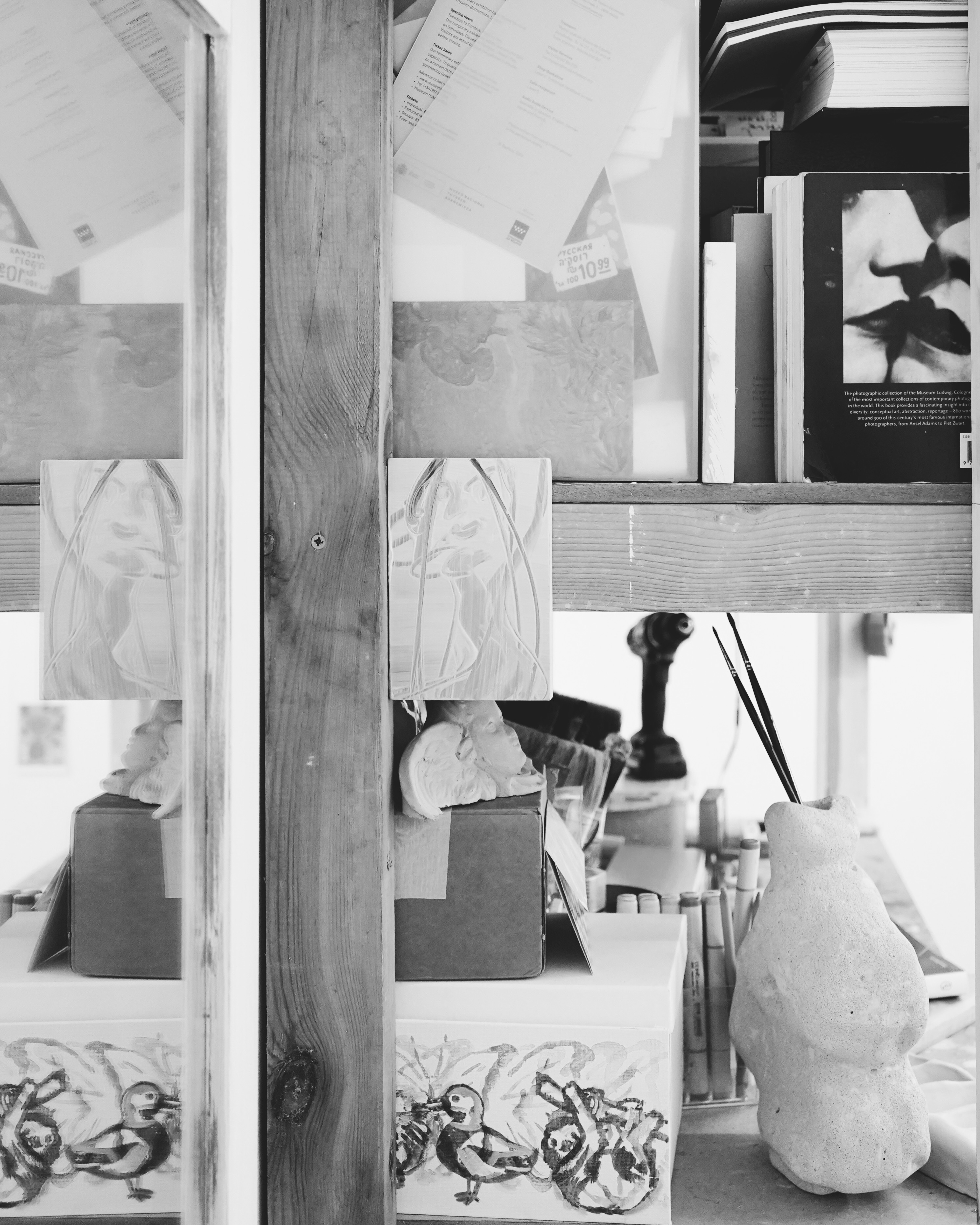 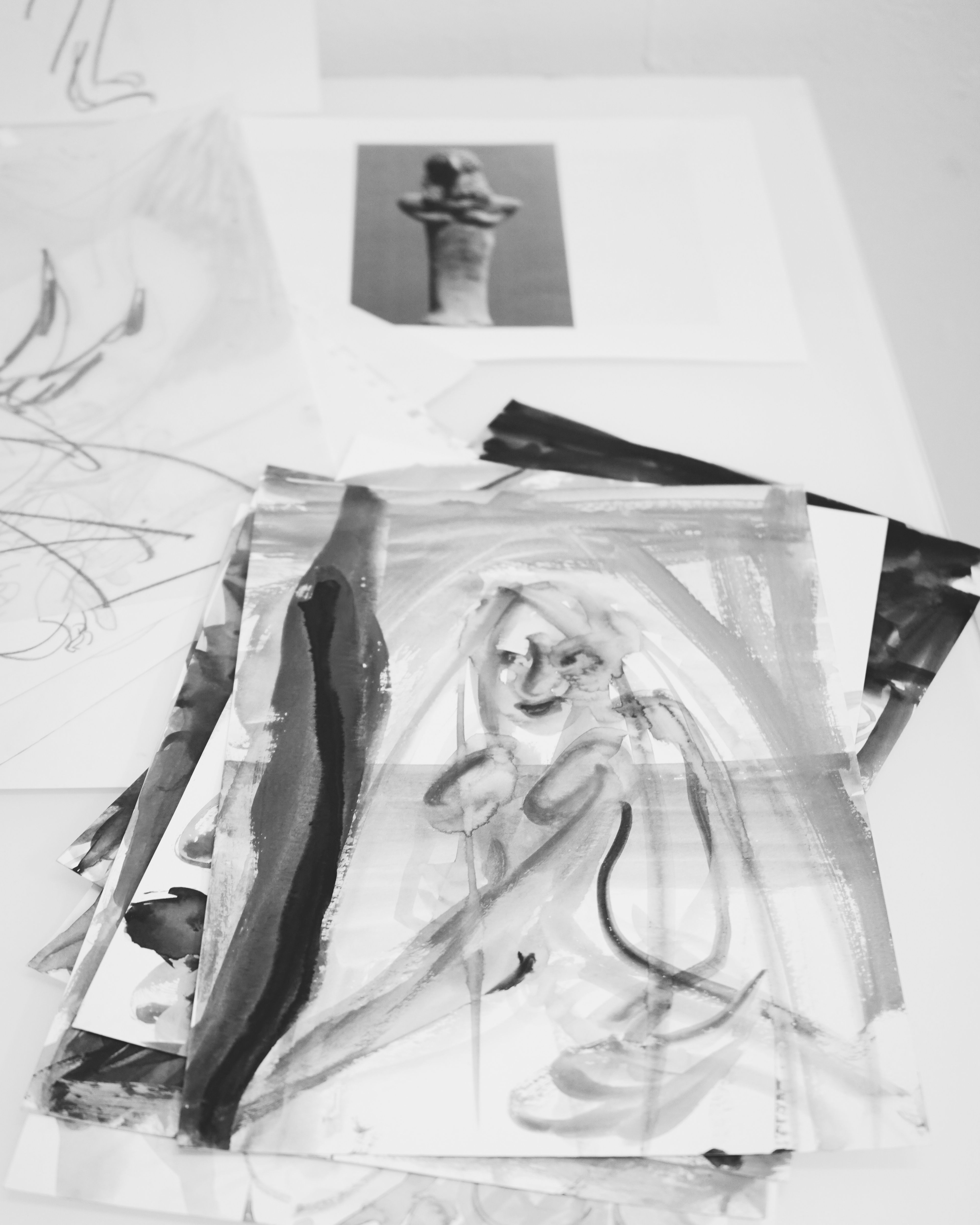 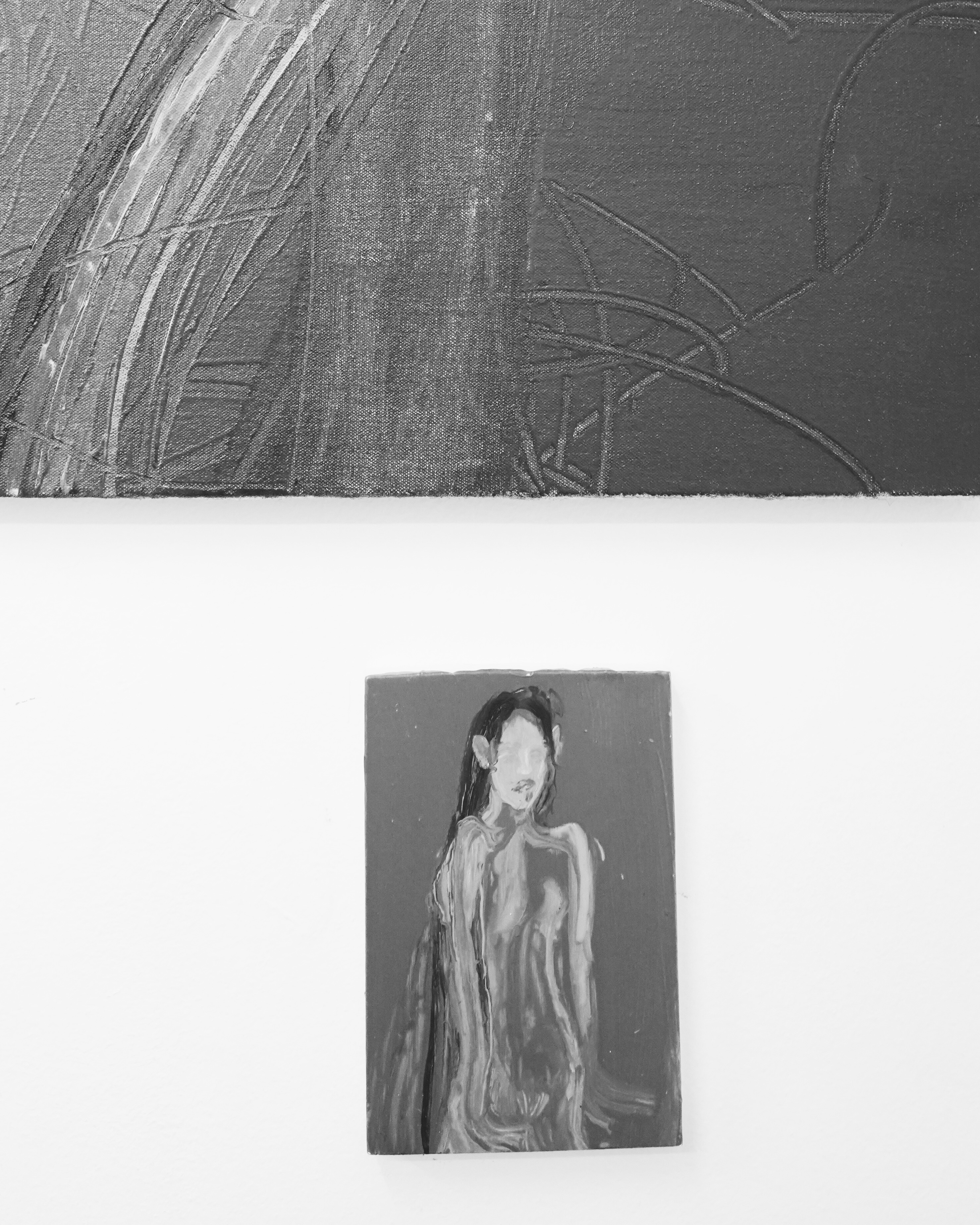 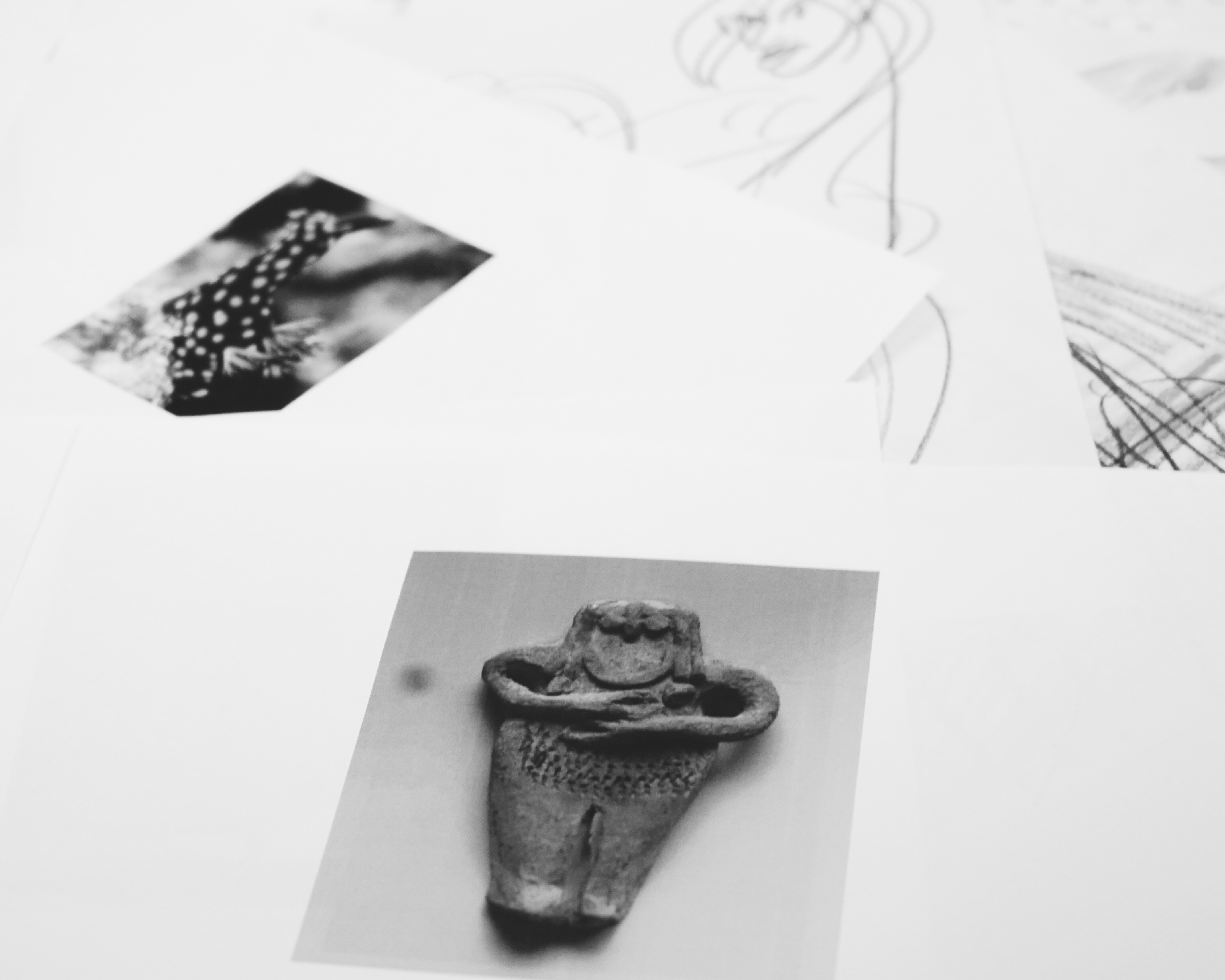 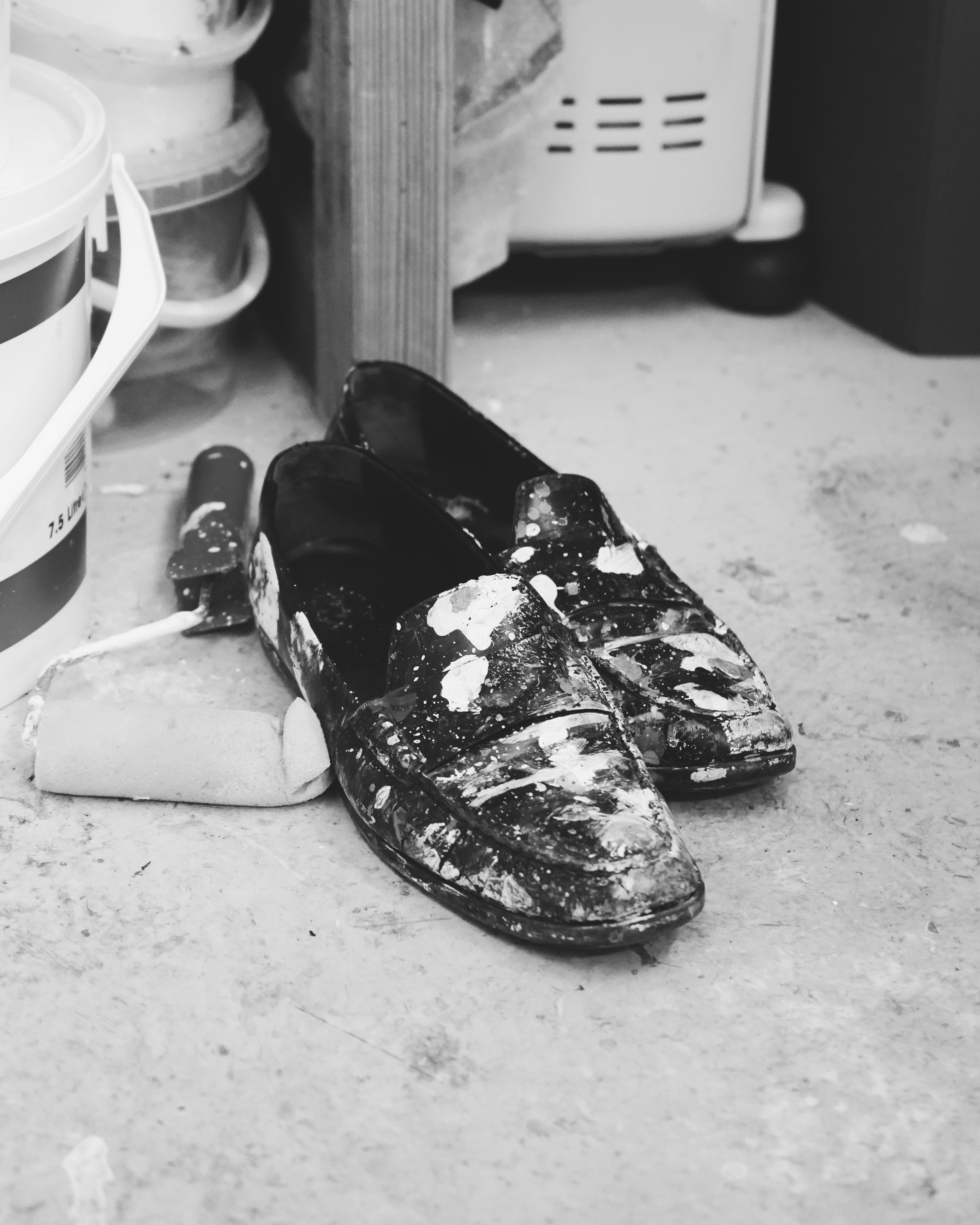