In the studio with Elliot Fox. Words by James Ambrose

You are next due to show work at Changing Room Gallery, London in March. Can you tell me how your practice has continued to evolve since your successful solo show Idol Hands at Platform Southwark last year?

I think my work has really evolved a lot from the last show – I’ve been further researching the natural properties and industrial histories of Cornwall and the relationship of the two around the subject of mining. I’m very interested in these ideas of natural minerals being extracted from the ground and used to make materials that in our minds are so far removed. I think this is an area that represents that space between those two worlds of the organic and the fabricated and exploring that space further is really exciting for me. From a practical point of view, I’ve begun taking a different approach to making work, especially in materials and scale. I’ve been looking at new forms of representation and new approaches such as model making and miniatures. Being able to execute work at various scales is really hard and something I’m trying to improve on. Some ideas from Idol Hands that have continued to develop are that of the physical communication of concepts within the viewing space through sound, light and movement – which is starting to form the basis around which this next body of work is created.

Idol Hands also saw an accompanying publication, your second publication after Bodywork, are these publications something you will continue to produce? What role do they place in your practice as a whole?

Yes, I think I’ll definitely continue to make them. I find it a really useful way of chaptering my process and practice in a chronological framework. Often I think the making of the books helps to further contextualise the accompanying show as well as balance out my own investment in the material and the conceptual elements of the show-building. It’s also a useful way to include bits of research that were really crucial to my thought processes in the development of the show that doesn’t always become physically obvious in the works. I’m interested in the format of the physical publication – the process of making these books is a great mirror to hold up to the rest of the work. This can be seen through the ideas of language and meaning and how that ties into the way we are presented information through publications. In my research, I collect and reference other printed media, rave posters or floral dictionaries and historical mining books - the format of these objects are very important references for the work. So by making my own version of them, I feel helps to give extra context to the work and my research methods.

You grew up in Cornwall, which has such a rich artistic history, how was it growing up there? Did art play a big role in your upbringing?

On a conscious level, I would say no. But with hindsight, it seems inevitable that it would infiltrate my work at some point. After spending a number of years away and having had the benefit of some perspective, I’ve begun to understand my relationship to Cornwall a lot better. When I was younger that rich artistic history you mentioned was consistently there in the background, you’d go into any mates or relatives house and there would be an Alfred Wallis reproduction on the wall - also my gran’s house was right next to the Barbara Hepworth as well as the Tate, so maybe the art world didn’t seem so distant compared to people who grew up in other rural places in the UK. But I wouldn’t say that the arts associated with the area had a direct influence on me. As a place to grow up, it was amazing in terms of giving you freedom from a young age but also being a busy tourist town, I think it instilled a good work ethic in me as people work really hard there to make the seasonal money last. I think a lot of the stuff I learned there has stood me in good stead as an adult navigating the professional world within the arts.

Do you feel the Cornish landscape and your roots there have had a greater influence on your outlook and practice since permanently basing yourself in London?

Increasingly so, yes. Converging the two disparate places in my head and making the two worlds relate to each other more and more is becoming a key reference in my work – even if that is done so in a non-literal sense. As I mentioned before, the combination of the natural and the industrial is interesting to me and is a relationship I continue to explore. I think I find the similarities and differences between the two places, have manifested itself in the materials and process I choose to use within my work and a boundary that I continue to look to blur and subvert within my practice.

Your most recent work has seen the inclusion of more organic elements and motifs, along with those digital elements you previously employed?

My work has always been concerned with the idea of place and referencing its immediate surroundings, whether that be in the materials or the imagery chosen. Being based in South London for so long, it therefore consistently referenced more industrial themes. One of the earliest introductions of natural imagery was when I kept seeing this motif of a neon hand holding a rose repeatedly in the windows of many nail salons in the area. I started to use this logo in my work and I think out of context it began to reference all these other ideas that I was also interested in, and this aforementioned combination of the natural and the industrial became more relevant to me. The duality of the places that have had an impact on me in my own personal life was beginning to find a synergy in my work, and I wanted to harness that and create a body of work that had real tension and a harmony about it – a combination of elements which are both ancient and futuristic.

‍
You make use of many different materials and mediums in your practice, what influences your choices in what to use and when?

I’d say my immediate surroundings and through my day to day work-life. I’m often in a manufacturing environment, so the materials I use often come from that place. The process I use to make a lot of my work is that any printing, painting or mark-making is attempting to mimic the way that the machines I am consistently around interact with the world. As more natural and organic elements have been introduced into the work, this has affected what materials and processes I am now using. So now often a cross-pollination within these choices. I’m interested in this idea of ‘confusion of media’, where there is a sleight of hand or making people second-guess what or how the artworks are made. So making the manufactured look organic or making the organic look man-made and thinking about how that affects the interpretation of the work - if a viewer is unsure what is ‘real’ or ‘fake’, then that’s a space that I find interesting.

I know you utilise a wide range of source material, is there a process for the compilation of this material and filtering of what you use?

Source material is always gained in an archival fashion, collecting books and magazines as well as taking photographs of things I encounter in my day-to-day. The archiving of images, drawings, and snippets of language collected through photographing, printing and overlaying is a constant process, which in turn maintains and develops this bank of images from which I take to make images. The repetitive use of these archived images in the work is what begins to create my own language system. So there will be common threads between consecutive editions of work, whilst new images will also be introduced. This helps to question the constructs of language, and the idea of the original meaning being distorted or lost in these selected motifs as it begins to take on new context within the continuous development of the work.

Music also plays a role in your practice, you mentioned there is always a soundtrack to your time in the studio. How does it influence you when you are working?

In the studio, I have a cassette deck of mostly repetitive electronic music. I like the quality of tapes and how they sit between the space of analogue and digital and have an ephemeral quality. A side tends to last around 45 minutes and quite often that acts as a good timer to switch my concentration on and off. The nature of the music I listen to whilst I am working, helps to influence the nature of the work that I make. It helps to get me in that headspace of operating ’systematically’ so as to really engage with the idea of making in a mechanical way. I need to disengage with the present and almost become ‘absently present’, with my total focus being on the production. During Idol Hands it was these elements of the studio environment (be that lighting from the welder and projector or music from the tape deck) I felt were important to introduce into the exhibition because it allows the audience to enter that same headspace that I frequent when I am making the work.

How is the ongoing pandemic affecting you and your practice?

Initially, when my day-to-day job shut down, it did give me more time to allow me to develop my work a lot more and allowed me to be more considered in my approach to making - to think about the ‘why’ a lot more than the ‘what’. I’d been playing around with the idea of a show which went onto becoming Idol Hands, so used this time to really throw myself into that project. Completing a project like that has definitely given me the confidence to approach future show’s with a similar level of detail and to continue to pursue the discussed themes. Maybe the pace of life before restricted the amount of research and planning that I could put into my practice, and a desire or need to consistently produce work often meant that elements weren't quite as considered as they could be. On the other hand one of the many tough consequences that everyone is suffering with, is the lack of certainty and inability to plan.

You are also one of the founding members of “Collective Ending”, can you tell me a little about the group and its formation?

Yes, “Collective Ending” has been massive for me. The formation of the HQ came at a really important time for me. I had just been working for the artist James Capper on his Mudskipper project and through James, I got to know Billy Fraser and Tom Ribot who founded the project. We’d coincidentally all been evicted from our studio building and joining the project felt like a no-brainer. After months of hard work and collective effort, we opened the gallery and studio complex in December 2019. After an understandably restricted yet successful 2020 program, we are looking to really make the most of this year and have some really exciting shows and events in the planning. Being given the opportunity to work in more curatorial roles and exchanging ideas and thoughts with such a talented and hard-working group of artist’s has undoubtedly taken my practice to another level. 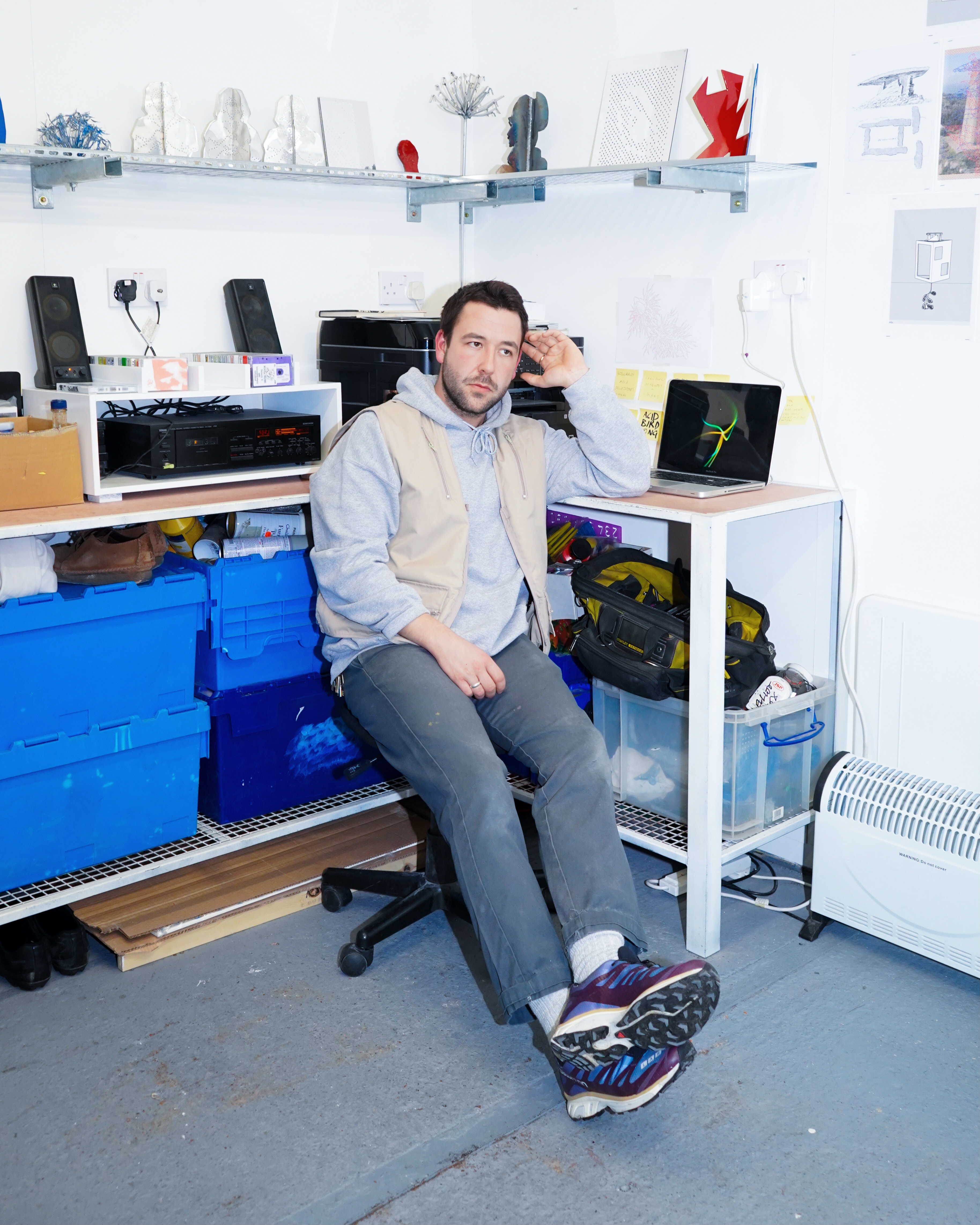 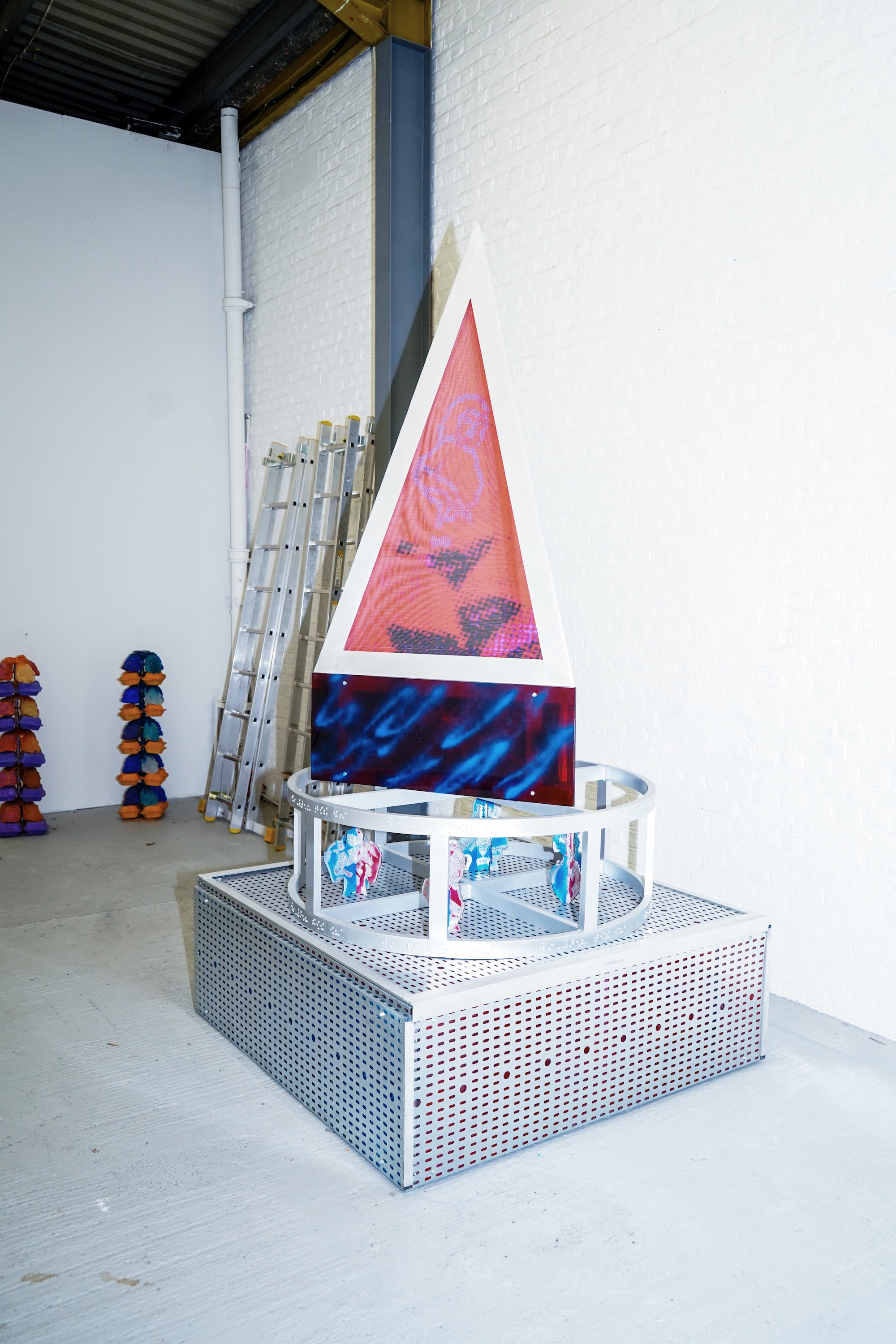 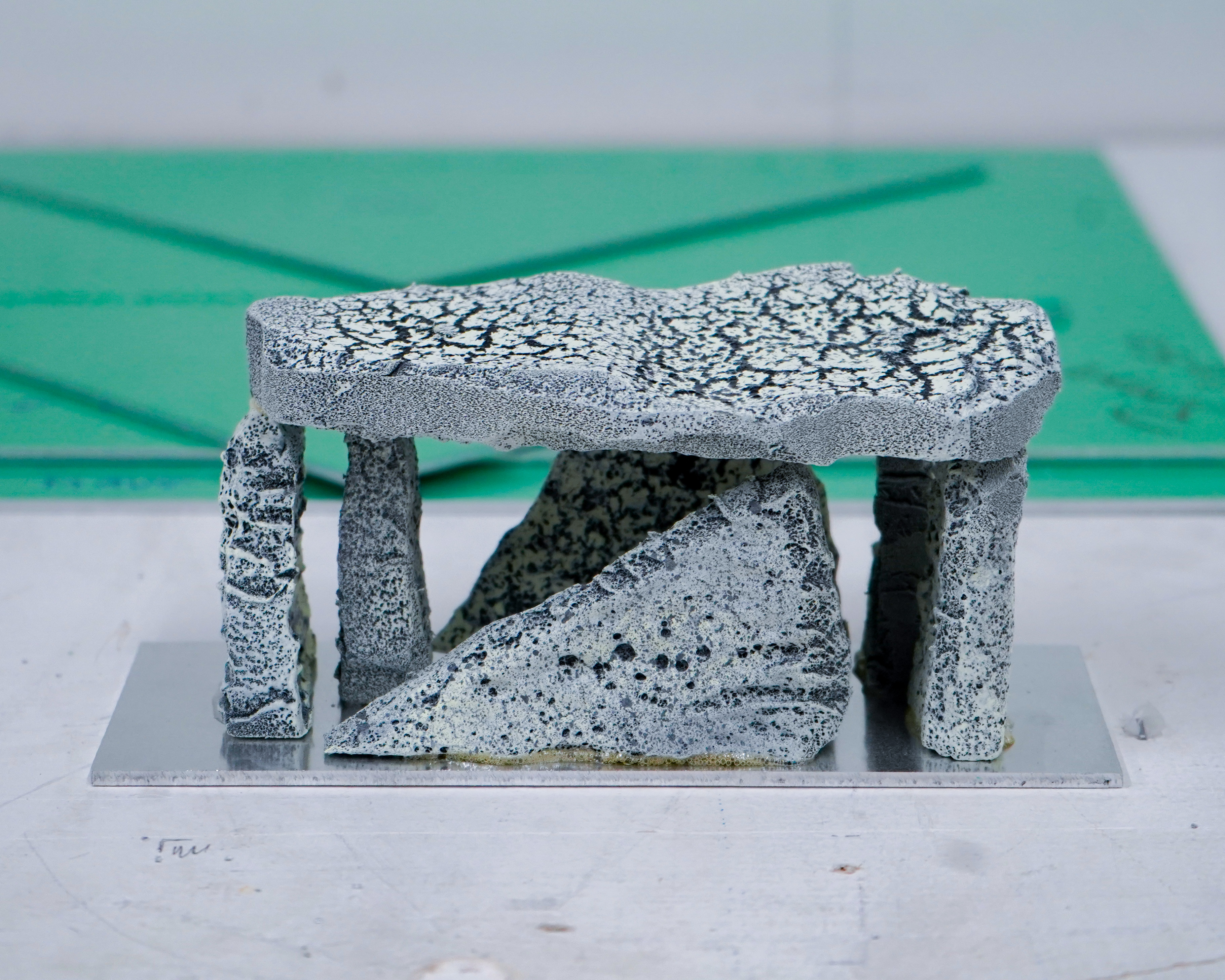 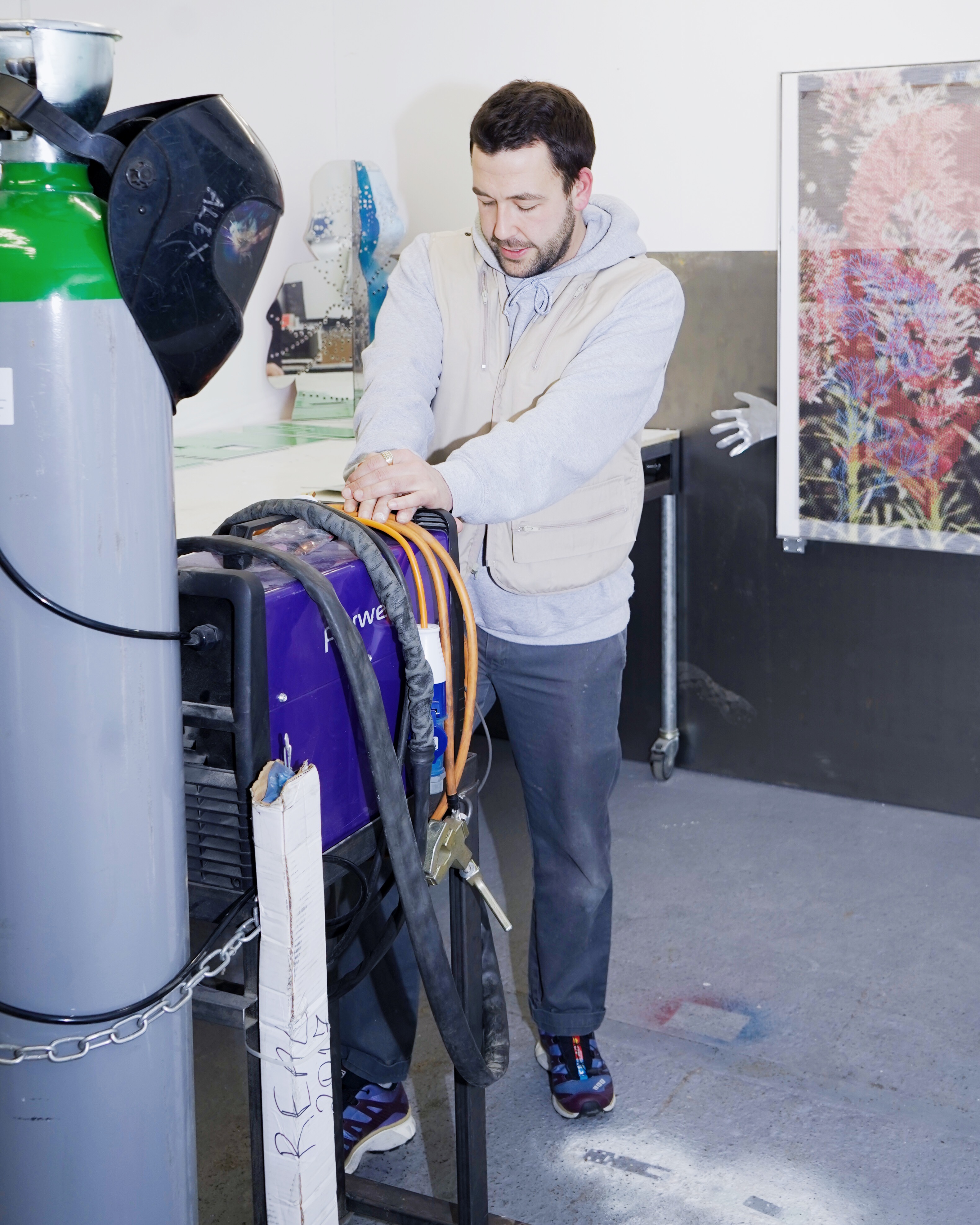 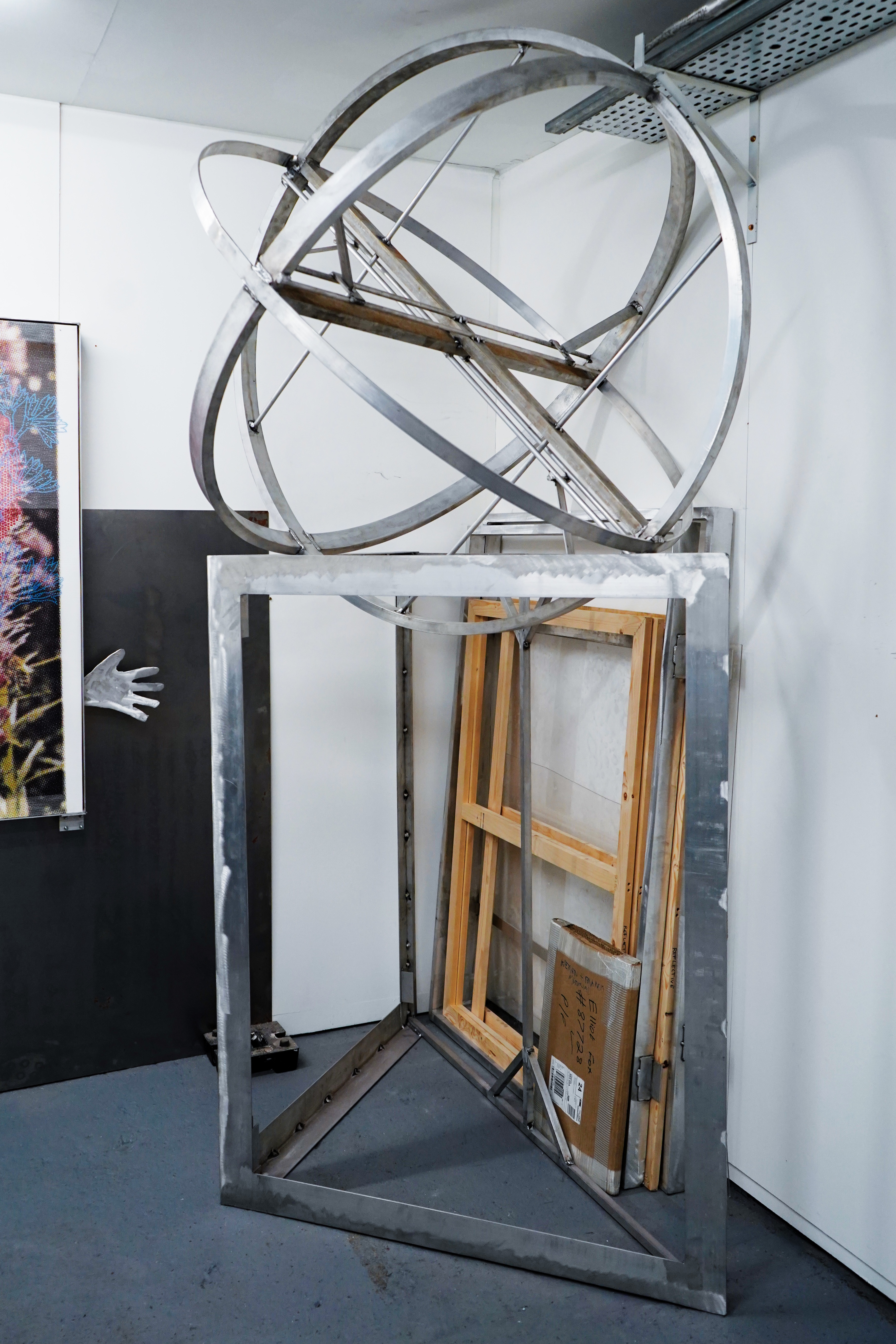 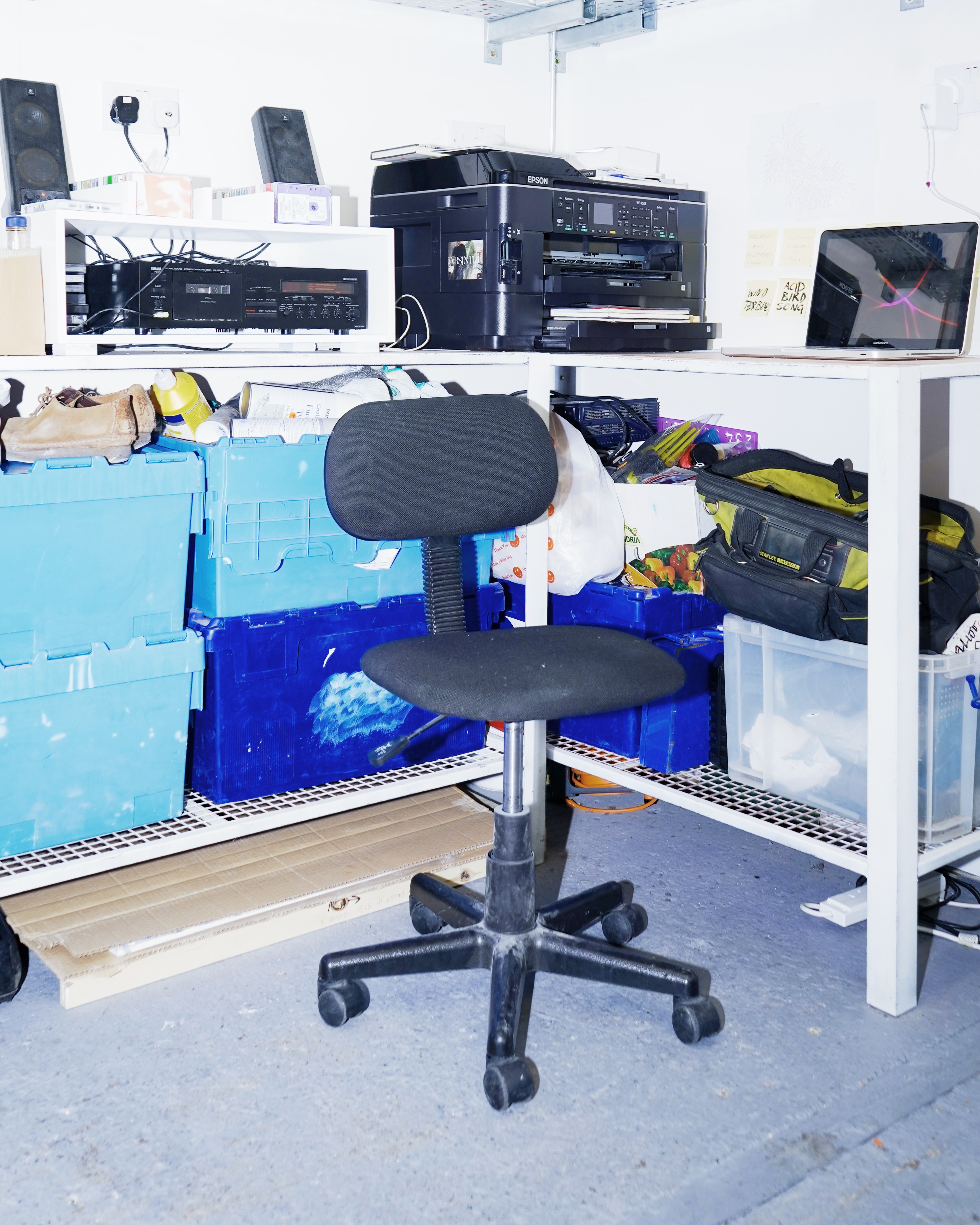