In the studio with Dylan Rose Rheingold.

In the studio with Dylan Rose Rheingold.

The first time I met Dylan Rose Rheingold was in August of 2020 for an afternoon coffee. We were both MFA students at the School of Visual Arts; I was about to start my second year of three, and she her first year of two. We spent hours at this little café in East Williamsburg, talking about school, friends, family, the ins and outs of Patti Smith and Robert Mapplethorpe’s relationship (as if we had ever spoken one word to either of them), the superiority of a Paulie Gee’s Hellboy pizza slice, how Krasner was potentially cooler than Pollock, etc. Besides noticing that I may have just met a best friend (I did), I noticed immediately how Dylan was naturally and unapologetically herself. She held no opinion back from me (Krasner was undoubtedly cooler than Pollock, of course), and I was just a stranger to her a few hours prior. Her honesty and candor were refreshing; her openness and easygoing attitude allowed me to feel comfortable and secure.

Dylan’s work is a reflection of herself. It’s open, honest, playful, sometimes awkward, sometimes serious, and totally confident. In her pastel-y, dreamy, ethereal paintings, she visually narrates the complexities of being a young woman in contemporary American society, focusing on the mundane or overlooked. The artist’s loose, gestural lines depicting objects and figures look both effortless and fearless – a testament to her talent. Her canvases are multilayered, raw, and real. Like herself, Dylan’s work elicits comfort and pushes for others to feel a little less “other.”

What do you do when you arrive at the studio? Do you have a routine, or is every day different?

Each day is different. Most of my ideas come outside of the studio when I’m in transit or observing strangers, or just writing and lost in my thoughts before bed. I try to have some sense of a plan before I come in on what I’ll be working on, but I can never seem to plan when I’ll be inspired. I bring my sketchbook or a notebook with me everywhere and am constantly taking notes.

If I’m starting a new painting, I’m working from the subconscious for the first few layers of paint. I’m not thinking about the “idea.” It’s automatic drawing. Surrealist, in a way. Once I start to layer and build a history, that’s when the intuitive mark-making based on my ideas comes into play.

Do you work in silence or with sound – music, podcasts, TV?

Always music. The only podcast I frequently listen to is The Great Women Artists, although I think I need to get with the times a bit more and start listening to more podcasts or audiobooks when I work. Once someone asked me if I listened to podcasts and I made a joke saying, “no but I listen to Leonard Cohen so it’s close enough” and it didn’t land lol.

Do you work on one painting at a time or a few at once?

I always start off with one painting but end up working on a few at once. I usually get to a spot in a painting where I need to sit on it for a while, whether I become stumped or frustrated or just need time for some oil to dry so I’ll start a new work simultaneously. It feels natural working in this way, especially since my paintings are building a narrative that isn’t linear. They are all in dialogue with each other. I don't want people to focus too specifically on only 1 singular piece.

How do you prevent yourself from overworking a painting?

Overworking is one of my least favorite feelings in the world. Whenever that happens, I usually end up painting over a layer to essentially erase and start over. I always add, never take away. The buildup helps build a history. I generally gravitate towards work that is borderline unfinished, so I really must force myself to sleep on some paintings. Artists like Rita Ackermann & Katherine Bradford are two of my favorites. The way they push the border between finished/unfinished is inspiring to me.

I value the process and experience over the finished product in painting.

You have a B.F.A. in Illustration from Syracuse University and worked as a designer at Universal Music for a year post-grad before enrolling in SVA’s MFA program. Do you think your background in illustration informs your painting at all?

Yes and no. I think there’s a huge stigma against illustration in the art world because it caters to a voice that isn’t your own. Painting is the opposite ... that’s why I left that world and decided to go back to school to pursue an MFA in painting.

I’m in an interesting spot, though, because I’m a painter with a drawing practice. Drawing and illustration definitely have a relationship. I am linear, not painterly. I tried to be painterly at the beginning of school and it’s just not me.

You typically depict scenes of the unglamorous, “everyday” moments of girlhood. In various compositions, a wavy-haired teenager shaves her legs in a bathtub, a petite brunette uses a –presumably – fake ID to buy a case of Bud Light at a liquor store, and a girl cries beside a phone that isn’t ringing. In life, these moments of “growing up” and maturing are raw, intimate, and awkward. Your paintings, though, feel charming, welcoming, and playful. Can you speak on this contrast?

I like to think that contrast is a distinguishing part of my practice. I’m pushing the limits of what is considered attractive in the world of painting by creating content that is real. Glamorizing the considerably mundane of the every day which is often not portrayed in mainstream media. The current standards of beauty are a bit superficial & unrealistic for most. It’s the same with social media, most people are only posting photos when they are all dressed up and look their best, or on vacation or out to dinner, only broadcasting the highlights.

To me, the scenes you are painting have a sort of dramatic, cinematic quality ... like Cindy Sherman’s film stills or like an image one might have seen on their Tumblr dashboard in 2010. Does photography or cinema play a role in your process? Like, do you reference certain photographs or films while painting or take your own photographs for subject matter?

Yes, I used to explicitly work with a stack of thrifted & secondhand photo references during my BFA, and then I started with quick reference photos of strangers & people I would see on my iPhone. Eventually, I started building a physical family archive during the Covid lockdown. I started collaging & mixing bits and pieces from different images as starting points before my paintings. Looking back, I found many similarities across the board. All these references and archives exposed a sense of otherness as these moments, people & places did not feel socially accepted. Some sort of awkwardness that didn’t fit into traditional the typical “American Girl Doll” lifestyle.

Recently I’ve been gravitating a lot towards the Japanese photographers Shōmei Tōmatsu & Daidō Moriyama. Older black& white films, as well. It may sound ironic as my color palette seems to be a constant stylistic element for me, but I’m starting to work monochromatically and I’m really enjoying the power of limitation. Especially since I work with many different mediums. Two of my all-time favorites, though, are Nan Goldin & Diane Arbus.

Do you value spontaneity or chance in your process?

Yes, that’s the best part. My studies and sketches are so free. I have still yet to replicate or capture that same sense at an equal level once bringing an idea to life on a large scale.

We both went to the School of Visual Arts for our MFA's! What was the art school experience like for you? Looking back, do you have thoughts on the value of going to art school? Any downsides? Any professors you'd like to discuss?

I feel very grateful to have been able to go to graduate school. The past 2 years felt like an independent study. It really worked for me; I learned a lot. I understand how it wouldn’t for some people, though. It’s completely on you how much you want to get out of the program & the faculty.

The professors were probably what made the whole experience worth it. My toughest critique class ended up being my favorite, though. It was taught by Marilyn Minter; she really wanted to engrain the idea of working in a manner that comes naturally to you and most importantly from a place of love.

Your most recent solo show, A Rose is Still a Rose, just opened at Jupiter Contemporary in Miami. Can you talk about the experience of preparing for the show?

This solo show is an exhibition of my thesis series, so I’ve essentially been working on the preparation for over a year or so. A Rose is Still a Rose is an identity-based investigation of girlhood within American contemporary culture. The paintings are definitely a fusion of abstract figuration & surrealism. I think most of them require time and attention in order to truly read into them. 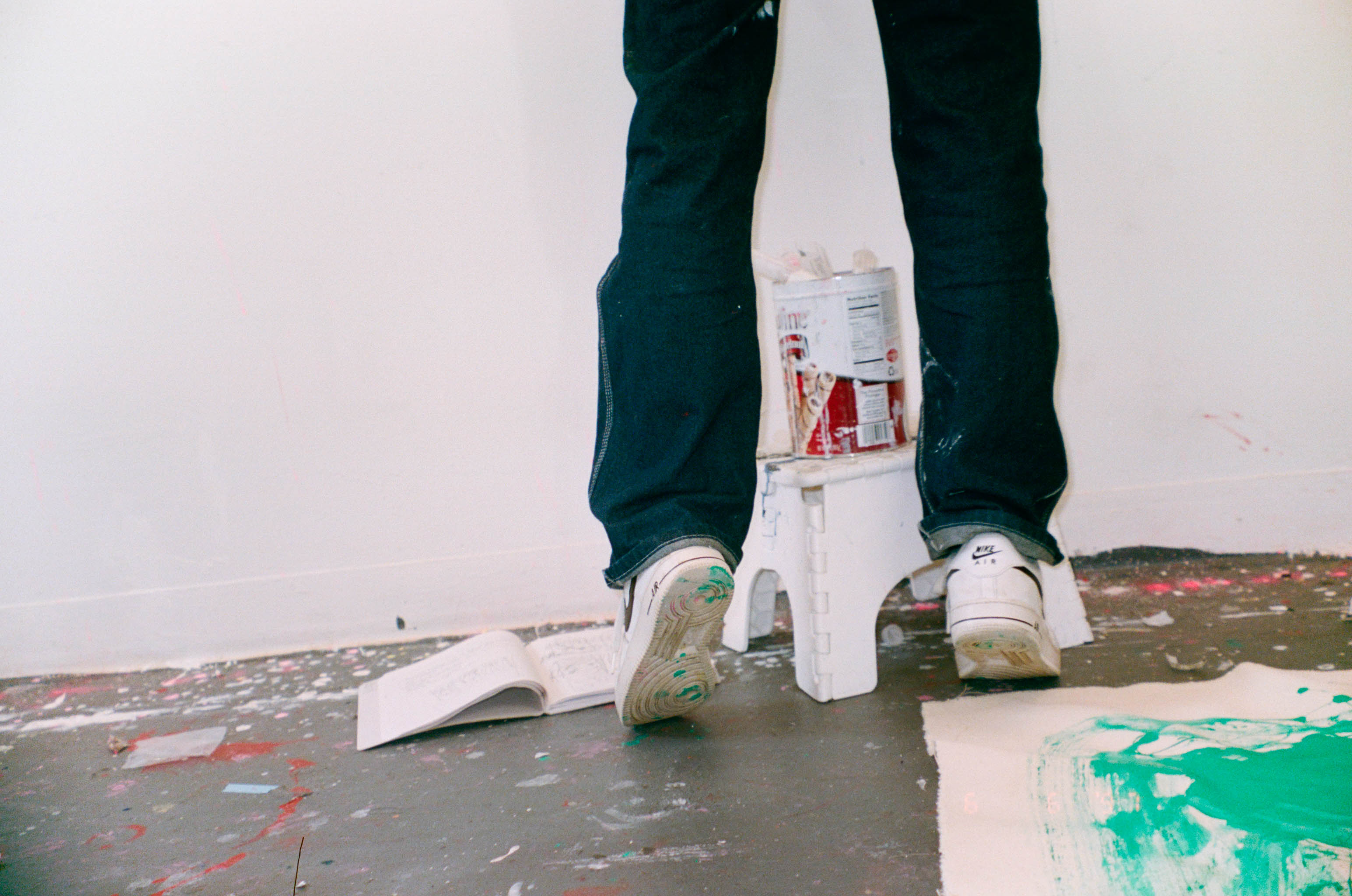 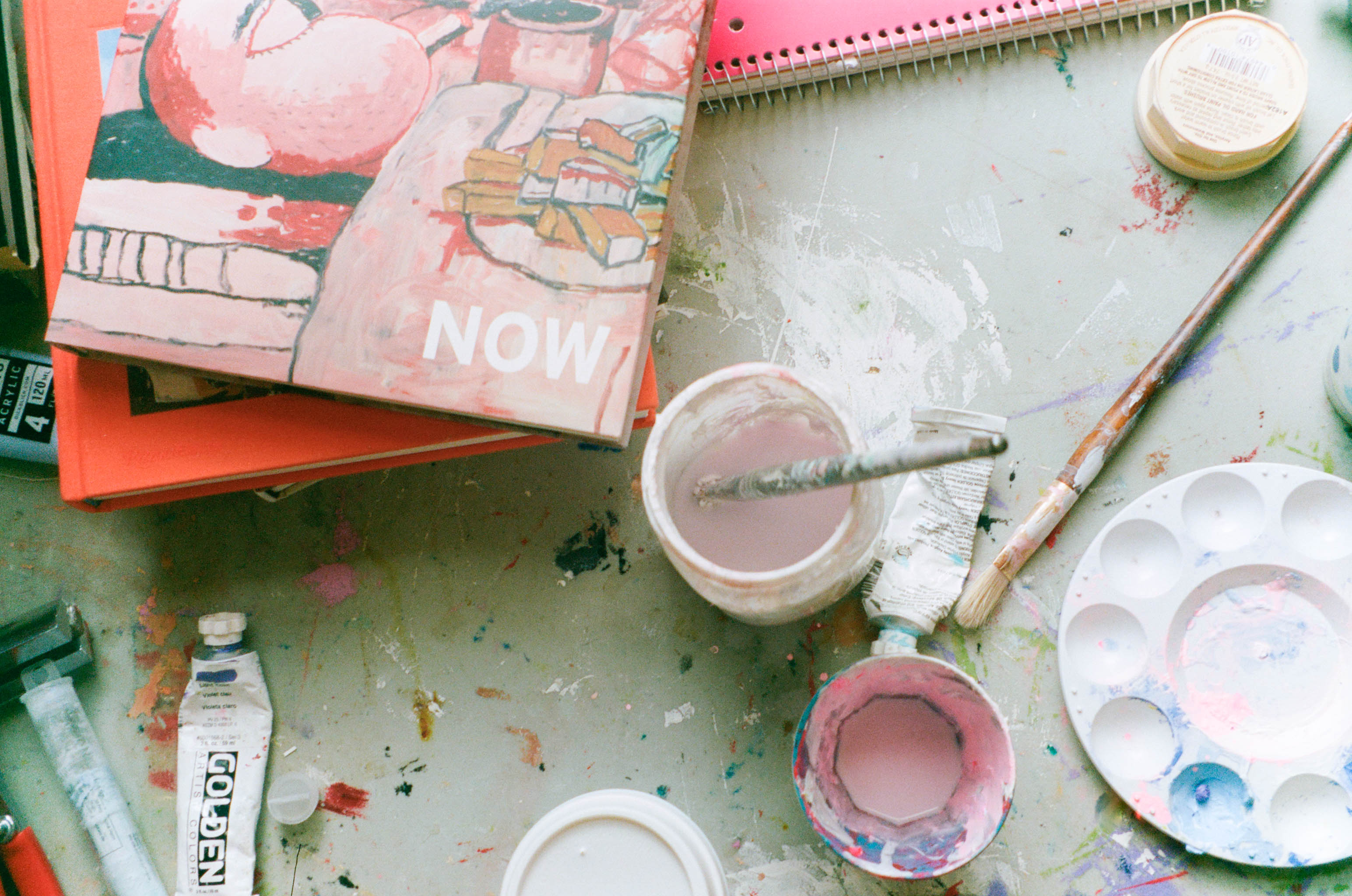 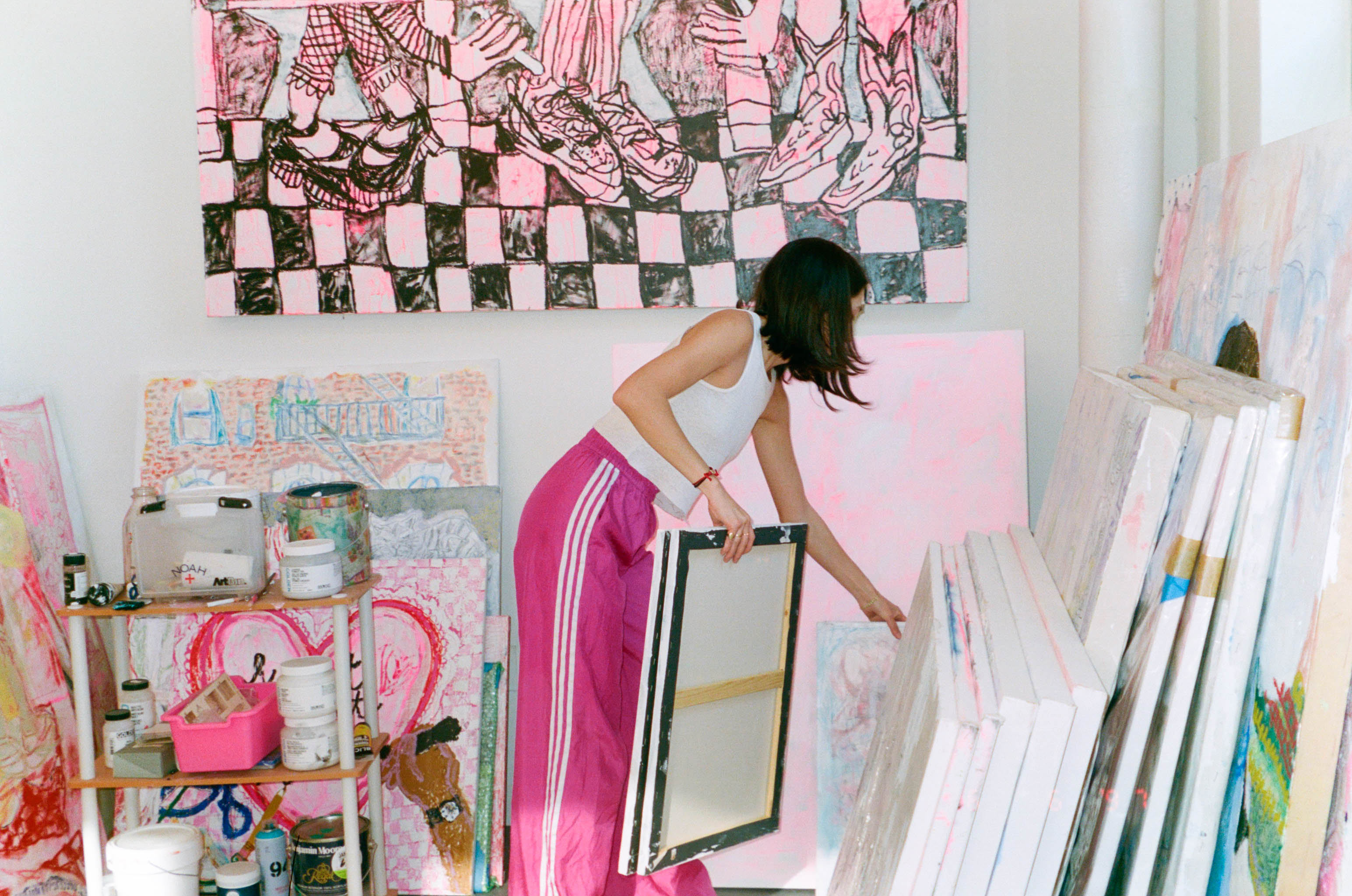 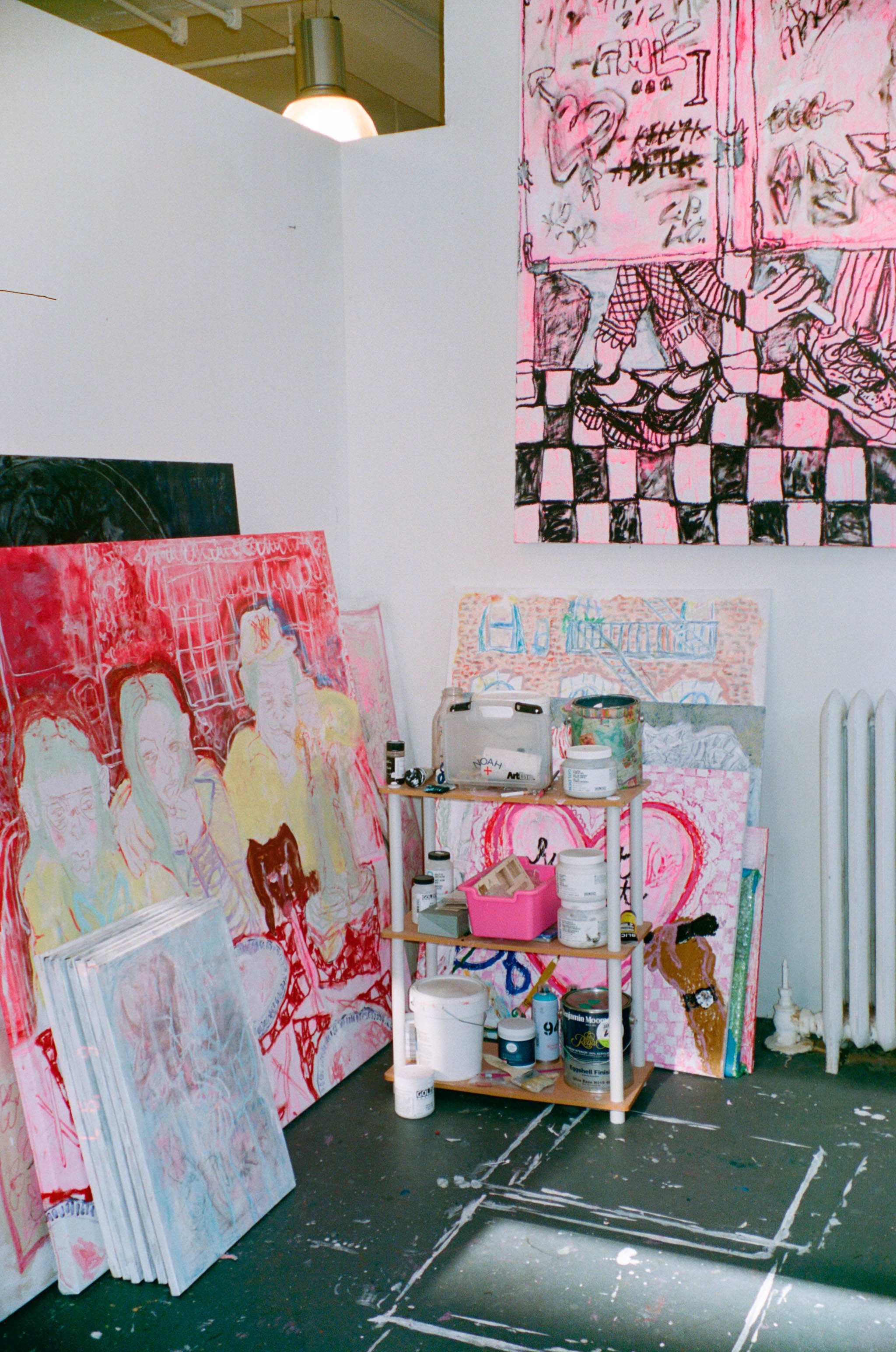