In the studio with Clémentine Bruno.

In the studio with Clémentine Bruno.

You just had your first solo show "Ironclad Contract" with your gallery Project Native Informant in London. Can you talk a little about the concept of the show, and how different a proposition it was putting this series of work together as opposed to your previous installations?

One thing I was focusing on for the show is a form of existence as trading, you can also call it the legal subject, which is a possessor of itself, through which man’s freedom follows from his self-possession. How something unique becomes possessed, secured by the act of the gesture, the signature (the name).  It is a manner to think of the subject through loss and commodification. Its freedom consists in being out in free circulation through which what is desired and exchanged is an essential creative act.  All objects proposed for this show are directed towards this model of existence. I guess this definition of the subject is hyper-stimulated in the painting.

The storage box and the tyre, both ready-made objects function as hybrids, they are replicas, relics of the paintings where labour is being re-coded.  For instance one of these objects can be reduced to a purely functional one; a lamp. Maybe it is an attempt to propose an analogy with the way you could build a painting. Pathos driven theories become a retrograde semblance of interiority.

"Ironclad Contract” is a deal made by someone who is not an innocent being, the title comes from Brian De Palma’s screenplay “Phantom of the Paradise”, which re-appropriates Faust’s story. Something else important in the works presented is the multiplication of voices, practicing a kind of double-language. For instance, a few paintings borrow past historical (major) figures such as Sigmar Polke’s painting “Higher Beings Command” (Höhere Wesen befehlen) 1968.

The show's text included a beautiful piece of writing by Georgia Sowerby, how did this collaboration come about?

I studied my MA with her, which gave us enough time to share lots of ideas. It felt important that the common space of writing, the press release, could become an extension of the show itself. She had this idea of creating a parodic citation as a piece of writing, to mirror the concept of the show; one in which a contract is being signed.

You studied first at Goldsmiths before completing your MA in Painting at The Slade School of Fine Art. What was the appeal of moving to London from Paris, studying here, and then taking the decision of continuing to base yourself in the city?

These decisions did not feel like entirely conscious decisions at the time. Coming to study here initially felt more freeing than staying in France. Goldsmiths offered a joint degree (Fine Art and History of Art) and after completing my time there, it seemed right to deconstruct what I had learned. Studying for my MA in Fine Art at the Slade then became very appealing. Staying in London came from a practical decision of allowing my practice to evolve, so I took a studio on the Isle of Dogs.

Having previously studied History Of Art, does research form an important pillar of your practice?

What looked like Art History on paper became what you call Visual Culture Studies, with a very broad and nonhierarchical set of references and subjects like, Beckett, Drexciya, and Accelerationism to name a few. As a pillar, this was good and bad. Closing down a certain naivety in the process of making by putting rules everywhere, but at the same time giving you the confidence that these can be deconstructed.

You mentioned you moved back to Paris during the lockdown period and throughout had a specific interest in watching and researching movies within the “Hammer Films” back catalogue. How has this cult film genre influenced your recent work?

The Hammer Film Productions catalogue is a metaphor for this form of existence as trading. The company started reproducing Hollywood Classic Horror films made in the 1930s, filming them in colour. These films use the cinematic technique called Day for Night (shooting a night scene during day time) and give the feeling and apprehension of reality as something absolutely predictable and repetitive due to the way they were constructed. You are being warned about the warning, where caution becomes precaution, through which states of consciousness are altered; disposed becomes predisposed, occupied and preoccupied, monition and premonition.

Also, what is quite fascinating is that hundreds of films were produced and many relate to the same exact story, “Dracula” is one: Dracula’s Nightmare, Captain Kronos Vampire Hunter, Dracula’s Brides, Dracula Prince of Darkness…. They also used the same actors to play the same roles over and over. I like to think of painting as a form of linguistic expression, as affected by a form of doubling. What is shaped there is a performance of a performance, drawing attention towards the close nexus between the picture and the actor/artists, in a process that constantly loses it states of reflection.

As the ongoing pandemic continues to disrupt plans throughout the art world, and knowing you were due to be presenting a new body of work at Art Basel in Miami, how are you adapting to these changes? Do you see advantages in a potentially more localised art scene?

It feels like the International Art Market has been replaced temporarily with a more local scene. Thus different projects emerge, and I am now focusing on an exhibition opening in November at Project Native Informant in their new venue in Soho. This space has a deep history within Soho, it was also previously a sex boutique, one of many based in the area, so allows the exhibition to be staged with a more intricate background.

Your work can be delicately detailed and intricately assembled. What importance does craft play in your practice?

Craft can be many things, but it is a vehicle for demoralisation. Making objects in that modality is in a way capitalising on artistic labour; handcraft, lived labour, physical labour, which simulates a form of commerce that is neither mystified, neither mass-produced.

Your paintings have an instantly recognisable palette, what leads you to the colour choices you make?

They are coded to direct you towards what I am appropriating, anticipation of past historical figures that I steal from.

What would you ideally like the viewer to take away with them after seeing one of your shows?

That it is an incomplete show, in the sense of being anti-fascist towards its ideas proposed. A show is also like inviting someone to a dinner party. I recently had a conversation with a friend, and we spoke of the viewer as a visitor.

The studio you have here in Greenwich is a beautiful space to work in, what does a normal day look like?

I like to think of studio-time as an activity that involves chain-of-command games, memos, and account sheets, a sort of management manipulation; where it is no longer a manipulation of the real but a simulated situation, a hypothetical scenario.

What shows and projects do you have lined up next?

In November I will open my next solo exhibition at PNI, Soho.  I am also working on an exhibition in Athens, due to open by the end of November under the name of “BAMBI WOODS”, which regroups a set of creative people, and where the exhibition borrows the form of a hybridised script. Lastly, I have a 2 person show at Chapter NY, NYC, with Adam Gordon in early March 2021. 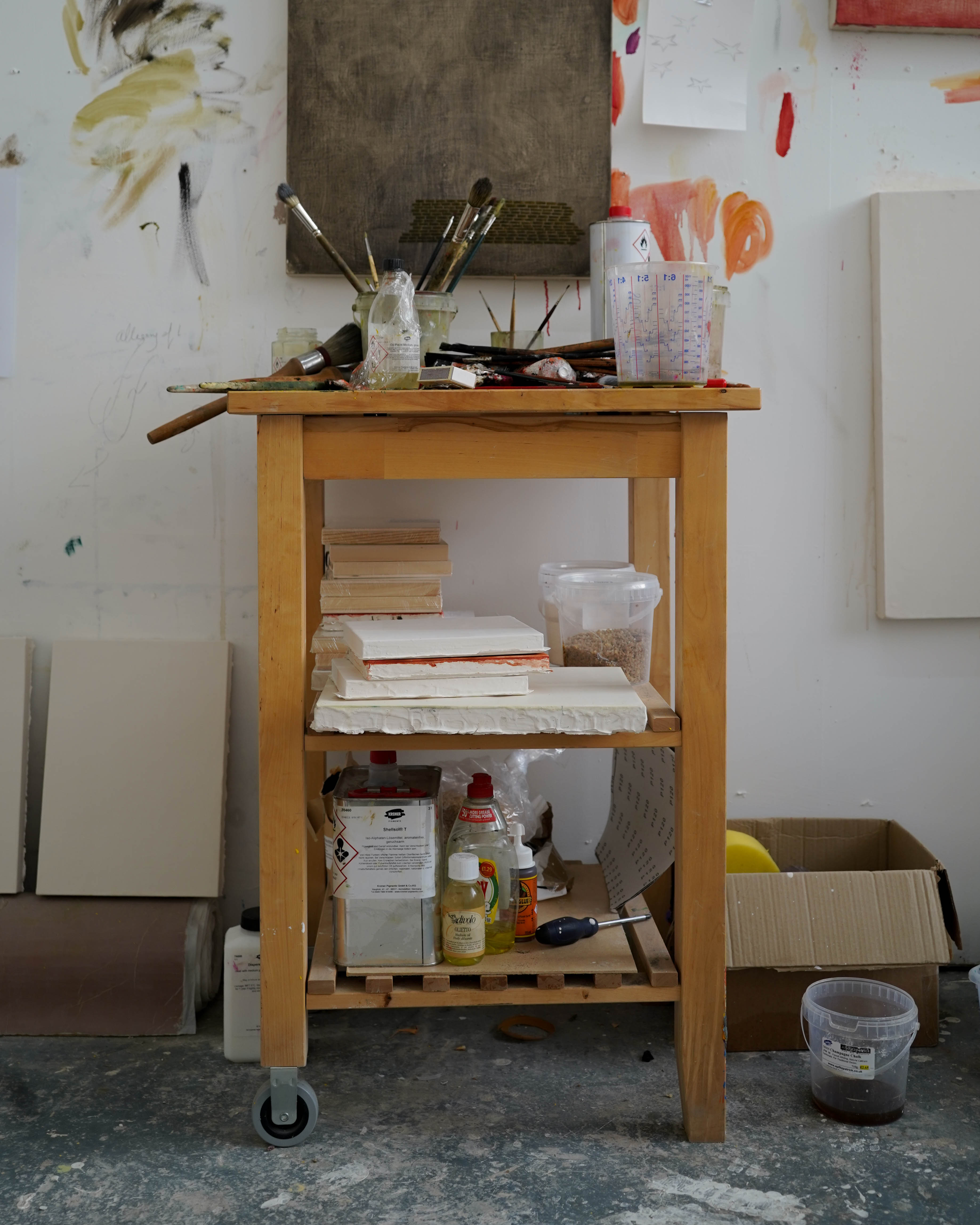 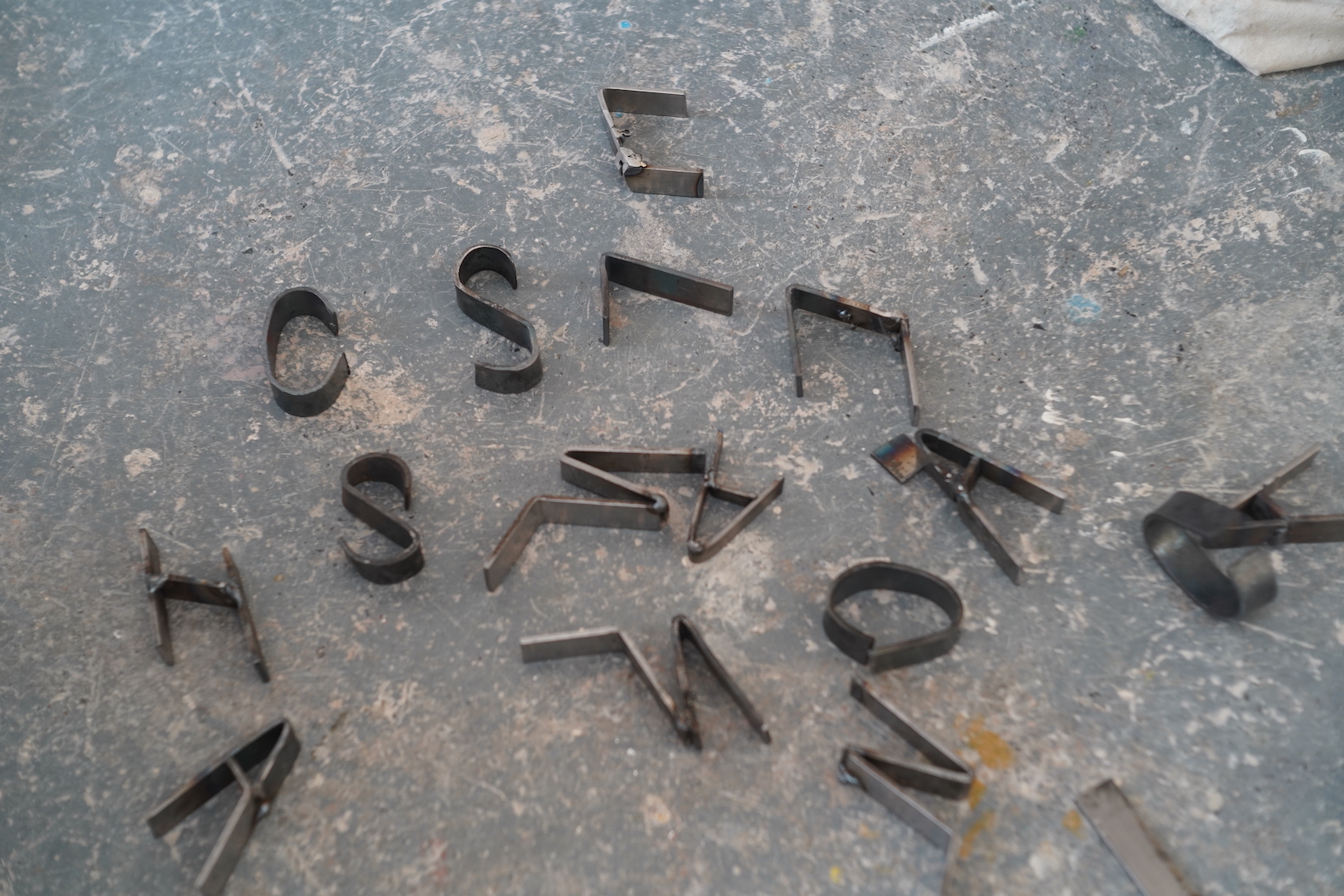 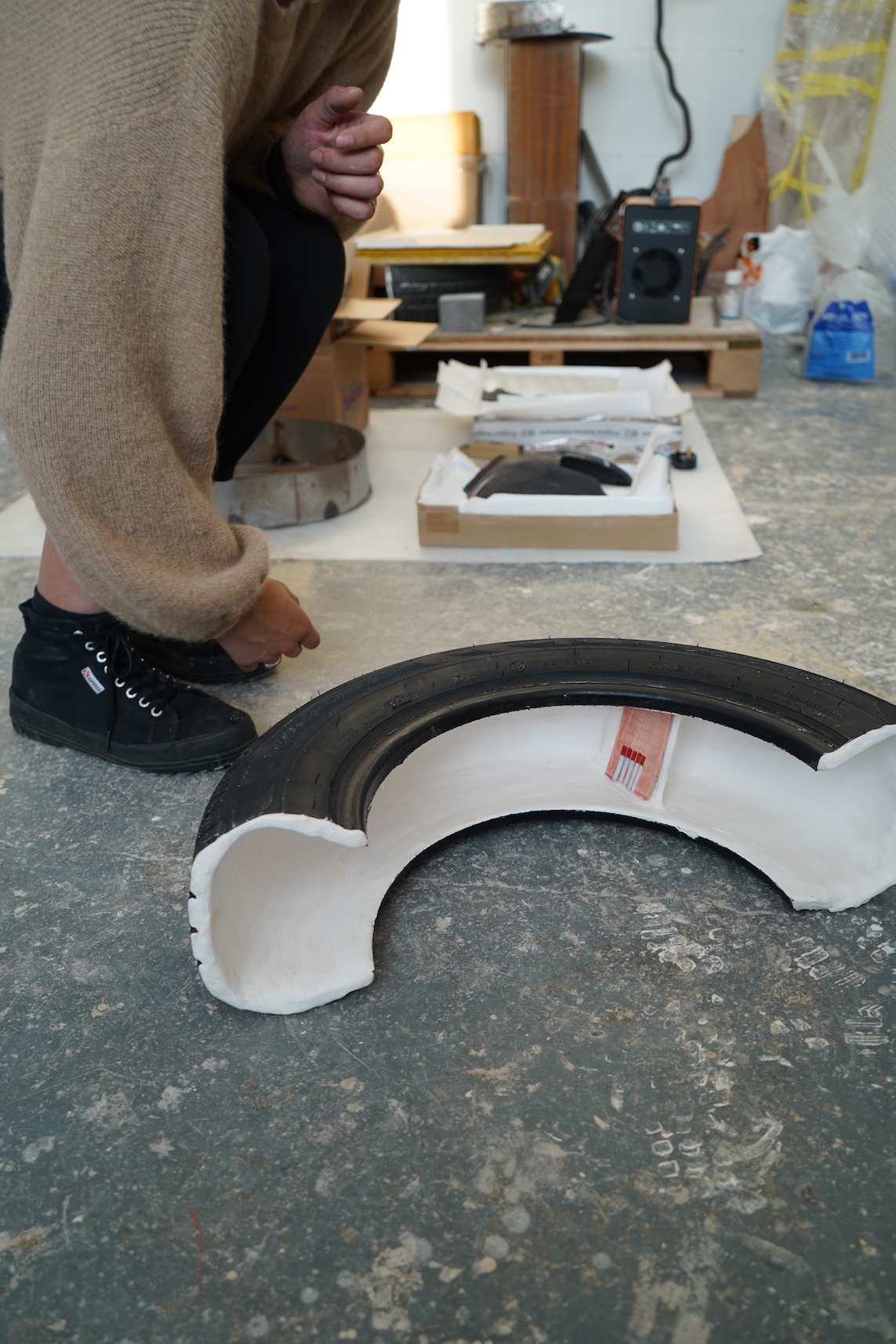 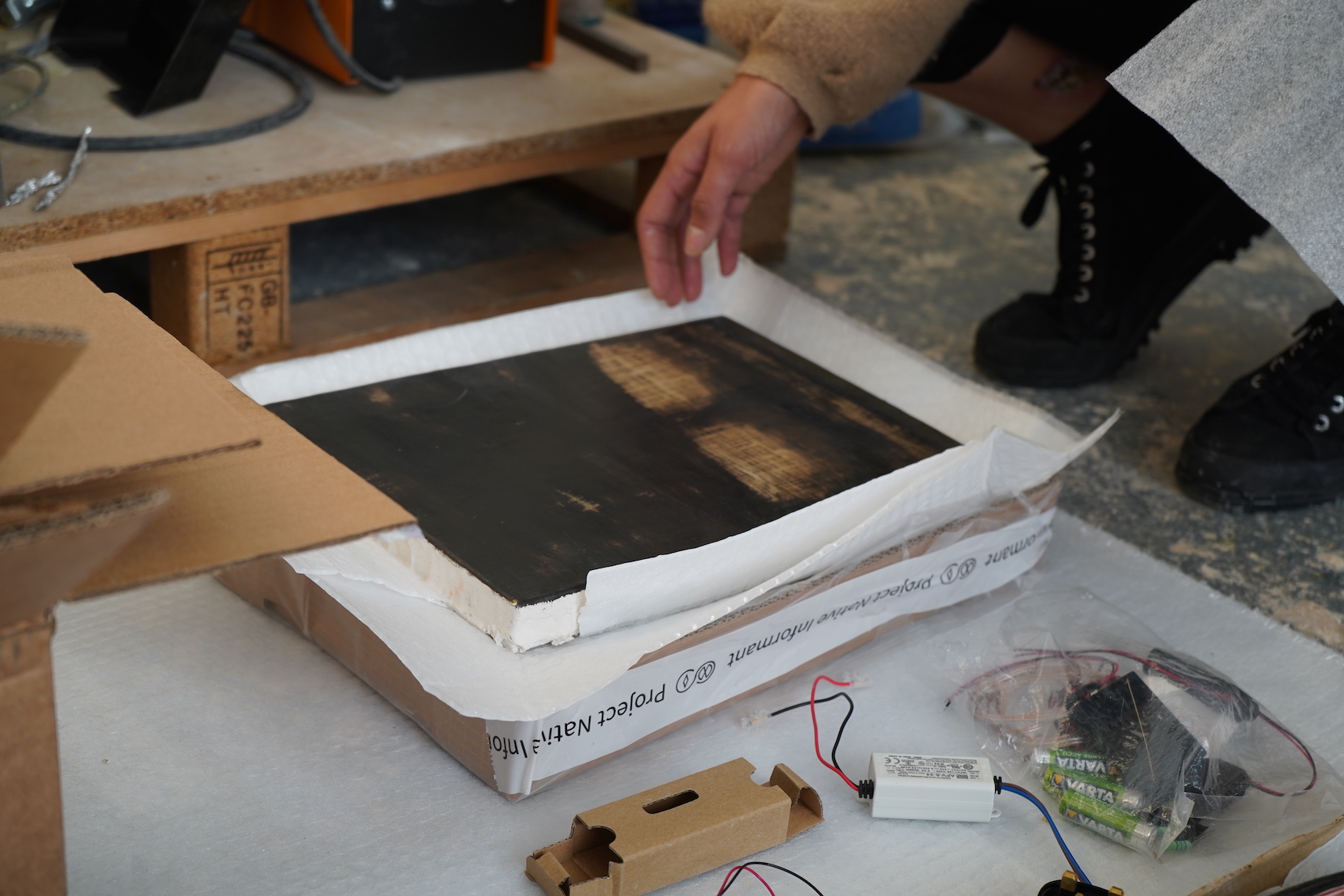 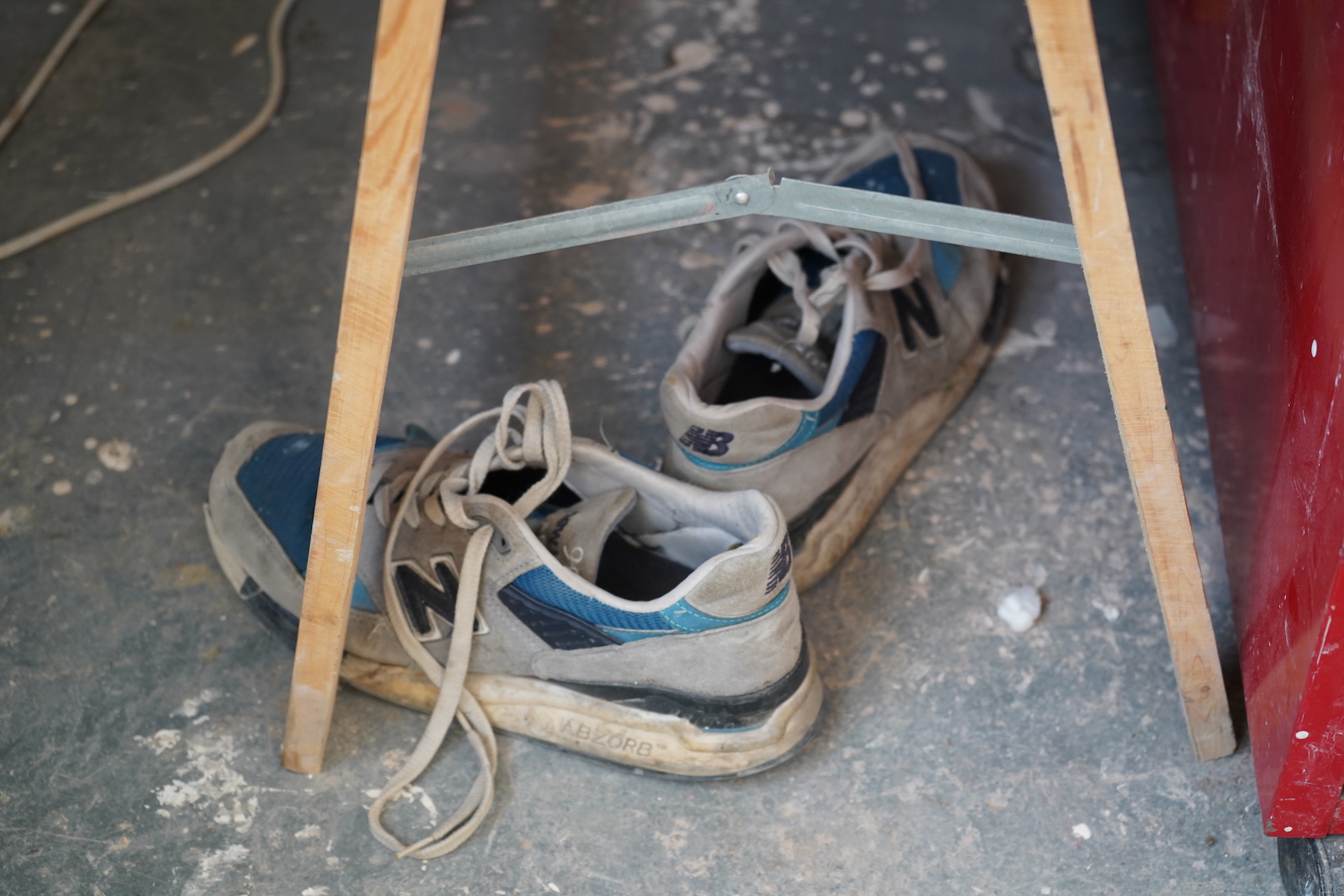 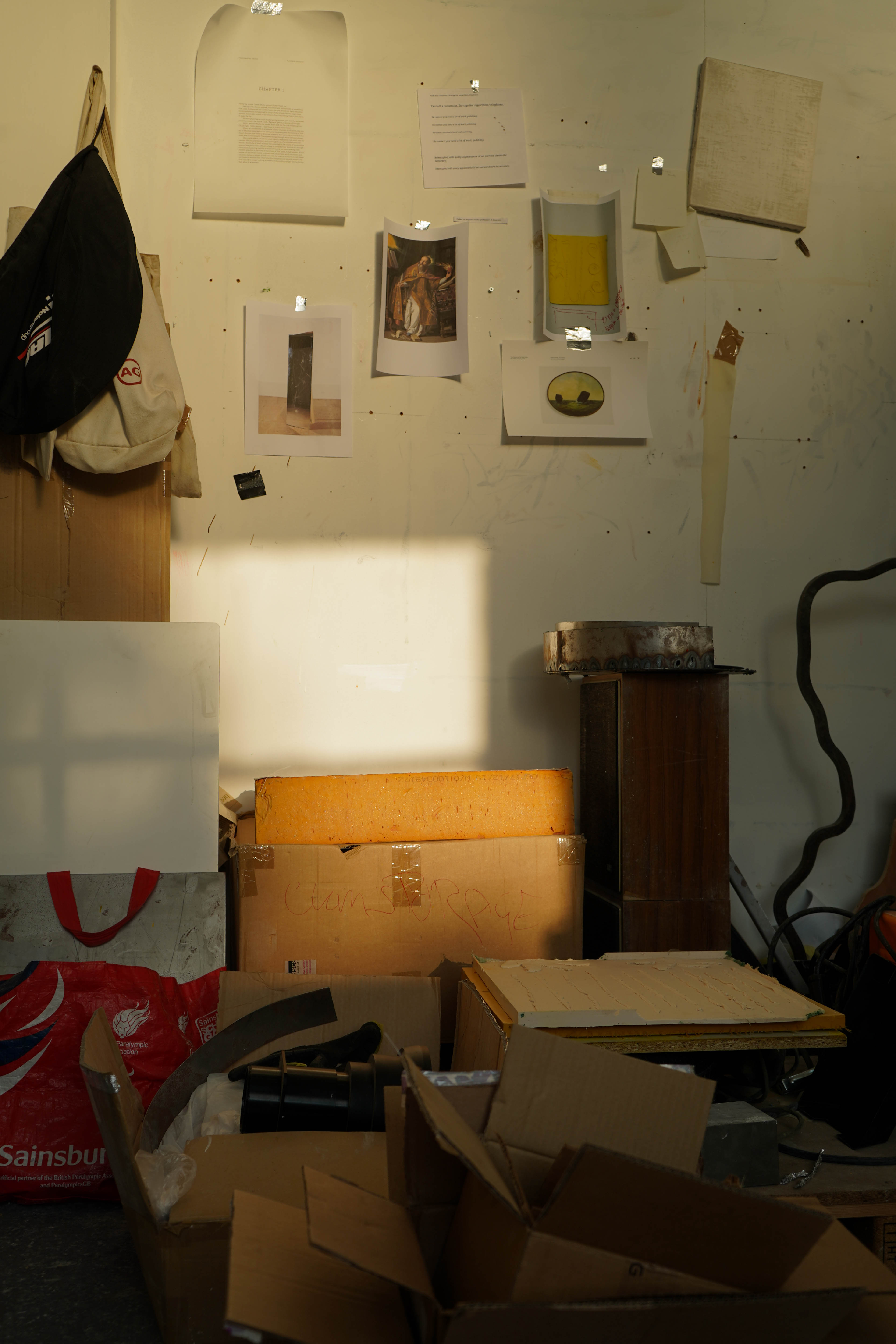 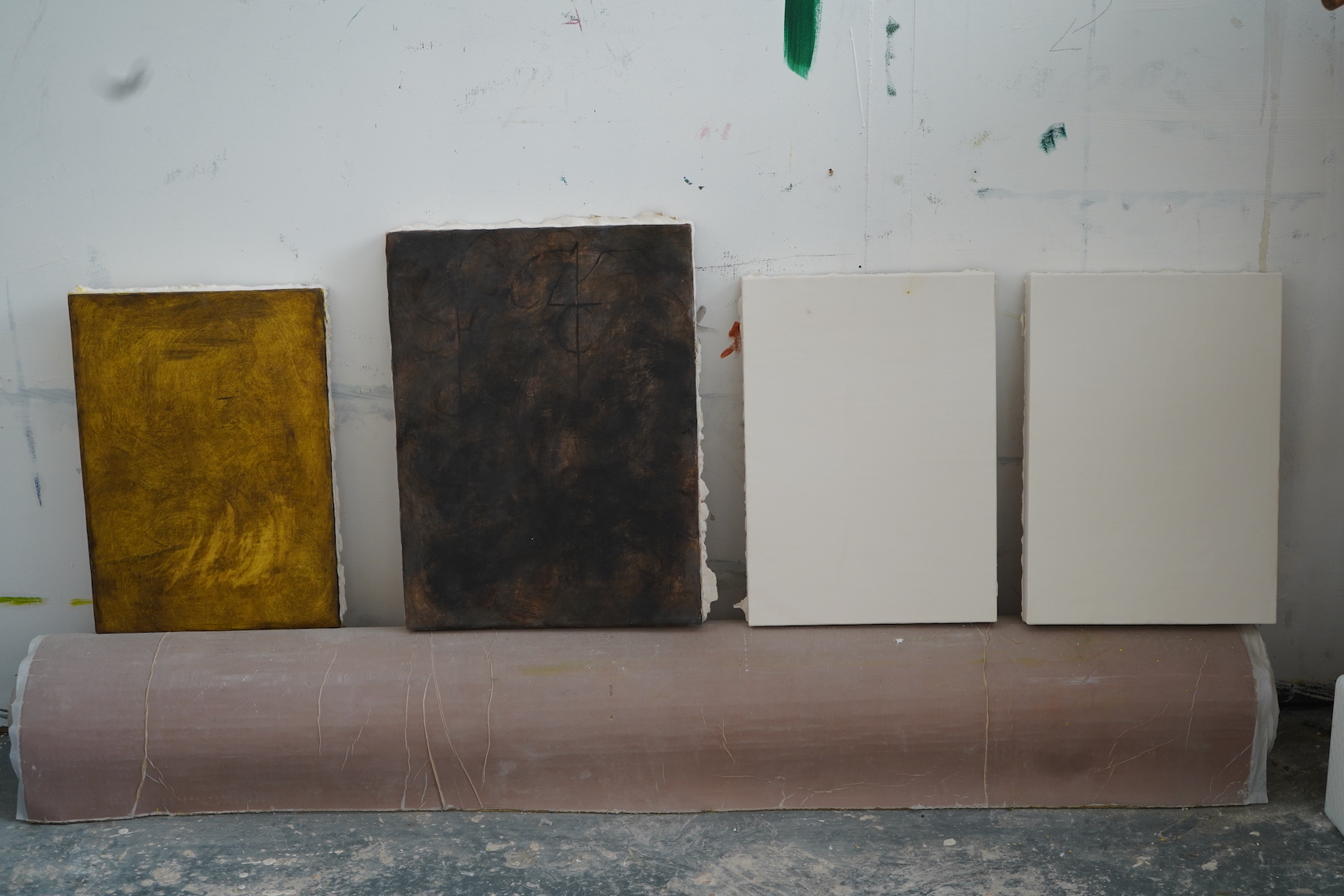 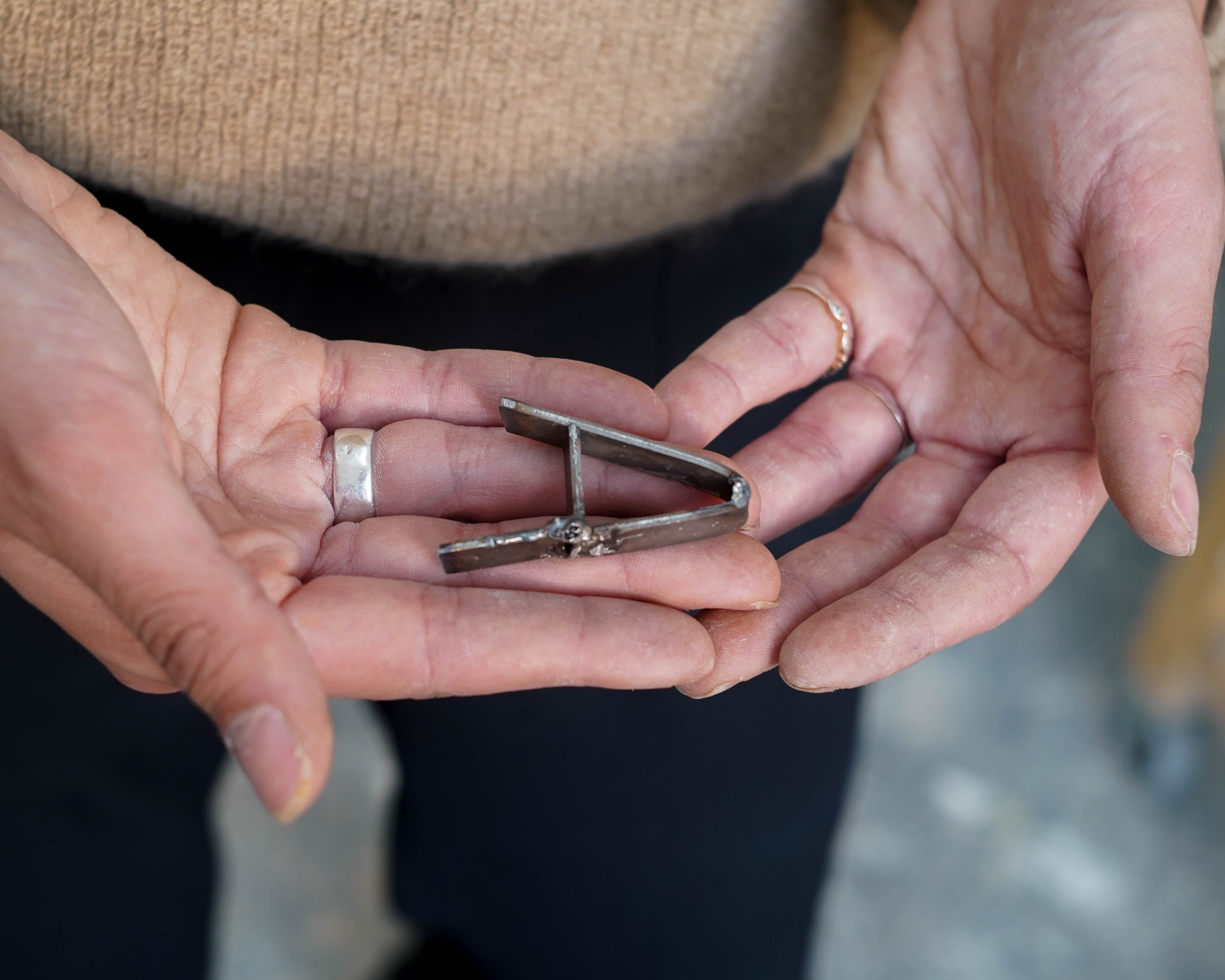 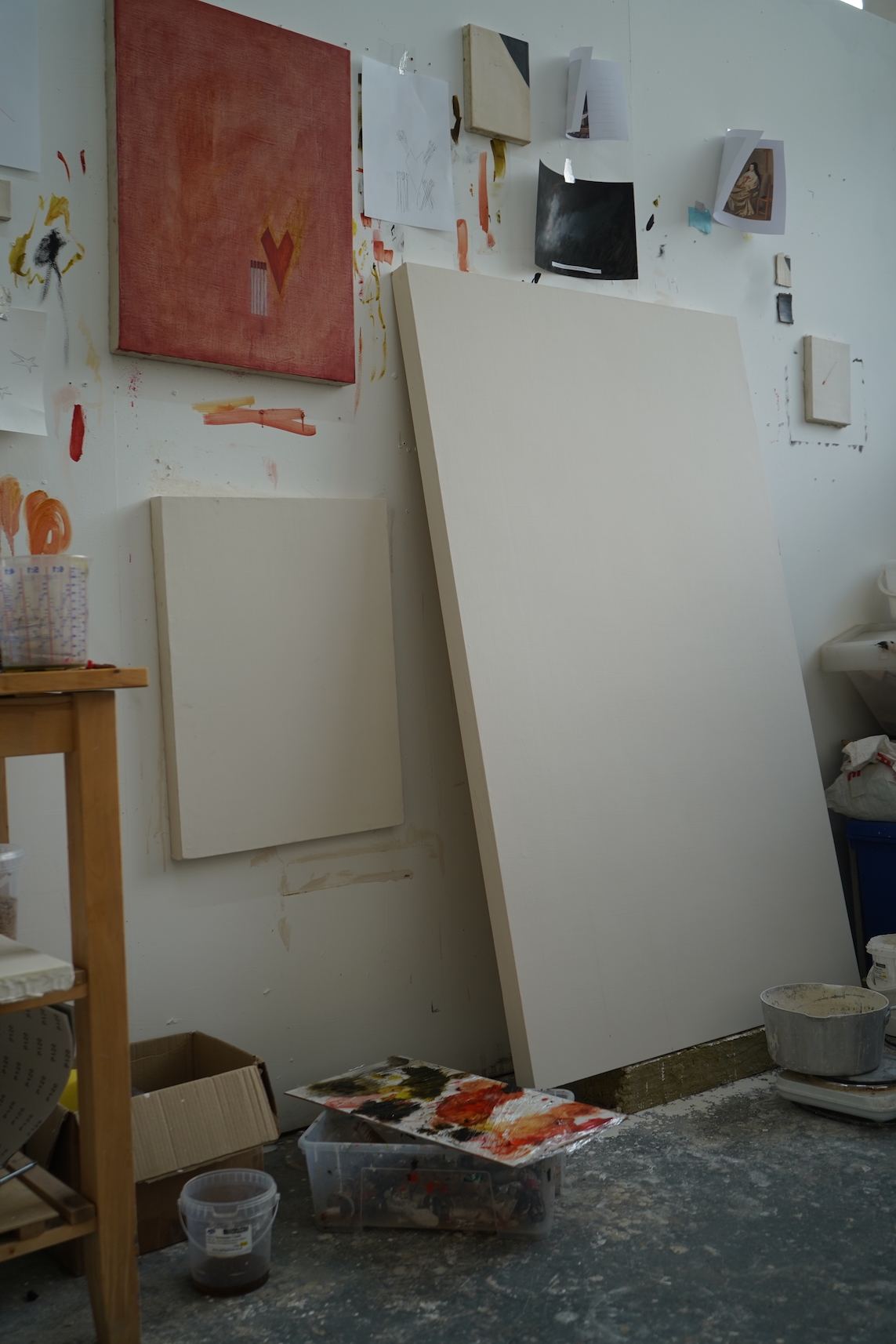 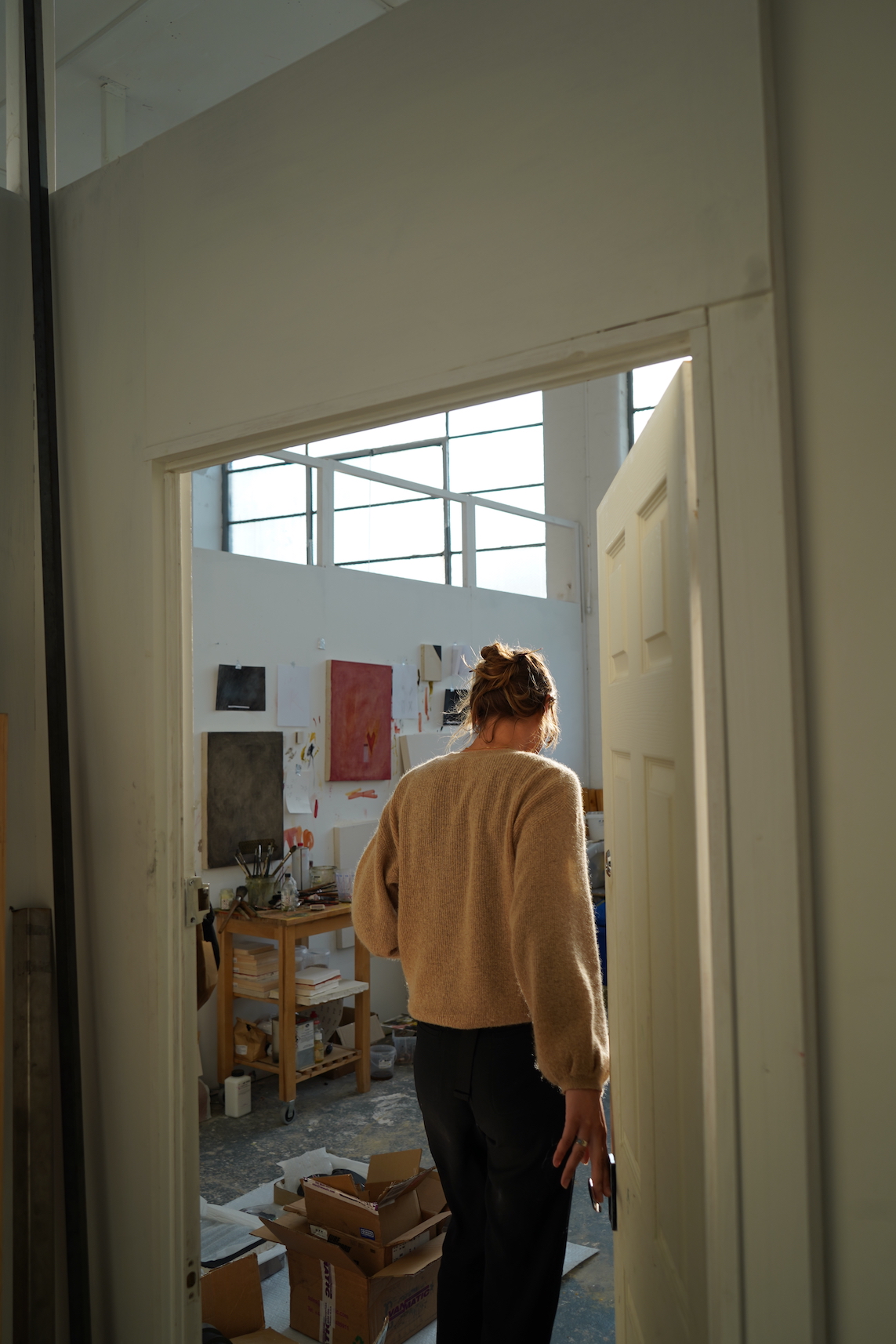