In the Studio with Brent Wadden.

In the Studio with Brent Wadden.

I wanted to talk a little about your most recent exhibition at Pace in Geneva, the show “Take What You Need” is a new series of works produced over the initial lockdown period. Can you speak about its concept, and how this series of work, in particular came about?

There was about a year and a half span since my last exhibition and the current one in Geneva and during that time both Covid and a new baby came into my life. It was actually in the same 24 hours, so lots of big changes around here! I had already planned on slowing down and adjusting my exhibition schedule because of the baby but in no way had I expected it to be a year and a half. It gave me some extra time to experiment and try some new things, but to also expand on some previous ideas without the pressure of producing a single body of work knowing it was going to be in the next show. I had a wide range of works to choose from which typically doesn't happen for an exhibition which is a luxury for sure. With weaving, you are always surprised with the final result when you roll it off the loom. So, slowing things down felt like an important luxury to me.

Who were your artistic influences when you first started painting?

While a student at NSCAD in the early 2000s, the internet was just becoming a thing so most of what I was seeing was from magazines, zines, and the outdated books in the library. I think I identified mostly with the musicians and skaters who were making art at the time like the Mission School/Beautiful Losers and artists like Barry Mcgee, Margaret Killgallen, Chris Johanson, Harmony Korine, and Ed Templeton as well as a lot of stuff that Deitch Projects was showing at the time like Paper Rad and Dearraindrop etc. I just did a little search and am very happy to see that Loyal Gallery, New Image Art, Jack Hanley and Canada Gallery are all still going.

When you initially explored making textile works in the early 2010s and shifting away from traditional painting techniques, what drew you to the process and this medium of creation?

I often had comments from friends on how much my work resembled textiles or how it would translate very easily into a weaving, and that really planted the seed. In 2010, I saw a Jockum Nordström exhibition in Ireland, who I was a huge fan of, but the coolest thing was there was a second smaller side exhibition of Moroccan rugs which totally blew my mind. It was my first time seeing vintage Azilal rugs in real life. The large weavings were all hung very tightly on the wall instead of on the floor, so it already had a different intention than just being a rug. I was completely drawn into the wild patterns and psychedelic nature of the lines and how the patterns and colours just started and stopped randomly. A few months later, I reached out to artist weaver Travis Meinolf, who was living just a few blocks from me in Berlin at the time, and who was kind enough to show me the basics on a tiny laser-cut backstrap loom. For a while, weaving was just one of the things I was doing in the studio, but it eventually took over.

There is a certain energy in the relationship of the shapes detailed in your works, how do you determine the makeup of the work you create? Will it be sketched first?

In the beginning, everything was totally freestyle. I would weave panels for months and then pair the ones that I thought worked best together. Nowadays almost everything starts with a sketch, which mostly helps to keep track of the proportions and knowing roughly where you are at when starting a new panel. You still can’t really predict those magic moments where a line or colour crosses over from one panel to another, but you just hope it works. The way that I am creating the works leaves many small aesthetic mysteries that are only really revealed once the work is sewn together and stretched—that’s when it all comes together and I get to encounter it fully.

I know that gathering the material for your work is an integral aspect of your practice, how do you go about sourcing the yarn you use?

When I'm in Berlin, I primarily use eBay. It’s easier for me to navigate because of the language barrier. I can just scan for used materials and put on an auto bidder for what I think it’s worth and not stress too much if I win or not. It was part of my daily studio routine when I lived there. Here in Vancouver, I primarily use Craigslist or Facebook marketplace searching mostly for huge lots typically from ex- weavers. I have had a few massive scores the last few years which end up taking weeks upon weeks to sort and organise, and which I usually leave for the downtime after a body of works leave the studio for an exhibition. I enjoy the sorting part of it, and it gives me lots of ideas of what to do next. It's easier for me to come up with ideas with the materials I have on hand instead of having a specific plan and searching out what I need to make that happen.

What do you feel has been the reaction of the weaving community to your work?

I think it's been super positive from what I can tell. In the beginning, I resisted identifying as a weaver but as time went on and it took over my studio practice, I became more comfortable with it. I've been included in a few weaving specific publications like Vitamin T: Threads and Textiles in Contemporary Art, Weaving: Contemporary Makers on the Loom, and Feelings: Soft Art—all of which I don’t think would have happened if I was still painting. If I have any questions whatsoever about the process, most weavers are there to guide you along until you figure it out. It’s really quite amazing how supportive people are.

When we first spoke we talked about the laborious nature of producing on the loom. How long do you generally work on a “painting” before you can say it is finished?

There are so many parts to the process that goes into finishing a piece besides the actual weaving, that take just as long that no one knows or cares about, but a medium-sized work typically takes around a week or so of actual weaving time. Although I wouldn't consider the work "finished" until it’s completely stretched and framed and then another day or so of meticulous cleaning up the surface, steaming the canvas on the back, and finally removing any debris from the front with a lint roller. One of the most satisfying and last things I do before photographing a work is to run a super dull pair of tiny scissors up and down between the wooden frame and the textile, securing any loose threads that might be visible. I try and do or at least help with almost all aspects of the production which can be very rewarding but also tiresome and maybe not necessary... Letting go of some control would definitely speed up production time.

What are the processes you employ in the creation of one of your textile works while on the loom?

First I make a sketch based on the materials I have on hand, often the current work is expanding on the last one I made, so in that sense, they are an ongoing series. Then I do the technical set-up of preparing the warp onto the loom which is very laborious and takes a few of us working together. Then we can begin weaving using a technique I've evolved of hooking the weft threads together. As we weave, the finished work gets rolled up at the back of the loom, and you can only see the few feet of the piece that you’re presently working on. The colour selection evolves as I am working with the materials on hand so colours can begin to run out, and I'm adding other shades and textures to the mix. It’s not until we unroll the whole weaving that I can see how the pallet has shifted and evolved. Sometimes we weave for two months before unrolling all of the panels, so the final works can be a big surprise.

After taking that step and exploring the process of weaving previously, can you see your practice expanding even further in time and evolving into other different mediums?

Yeah, totally. I'm happy with where I'm currently at with weaving but have so many back-burner projects that I'm just waiting for the right moment to do. Some are weaving related like using wicker or rattan which would allow me to move into the 3D realm or perhaps use similar materials which are more rigid allowing them to become an object in themselves. I recently ordered a tufting machine, which I was very excited to explore. Not weaving related, but I really want to start making small editions of 50 or so posters for each exhibition. I love printed matter and grew up playing in bands, designing, and printing posters for shows. The distribution of posters has become so much more accessible and has always been something that’s close to my heart. I’m not sure why more people don't make posters for art exhibitions, as it's such a thriving art form for music still.

What is it about being an artist and the act of creation that you love?

I knew from an early age that I wanted to be an artist even though I didn’t fully understand what it meant at the time and maybe I still don't. I'm so grateful that I get to make art every day, and think the world would be a much better place if everyone had the space, time, energy, and resources to be creative in some way. That's one of the reasons why I love folk art so much. It’s usually made by someone completely unexpected like a retired lobster fisherman who just wants to keep busy, so they start to carve or paint using the skills and materials they are familiar with. It's so honest and free.

You said you have now moved full-time into your studio in Vancouver (after previously splitting your time between Vancouver and Berlin). What does a normal day in the studio look like to you?

Well, this year I usually get up around 6 am with my kids and get them ready for the day. Then I usually hang out with the baby while my partner, Zoe Kreye, works in her studio. I get to my own studio sometime after lunch and try to blast through any computer work right away. I find I'm happiest if I can sit at the loom for at least a few hours weaving while listening to podcasts and Democracy Now!. 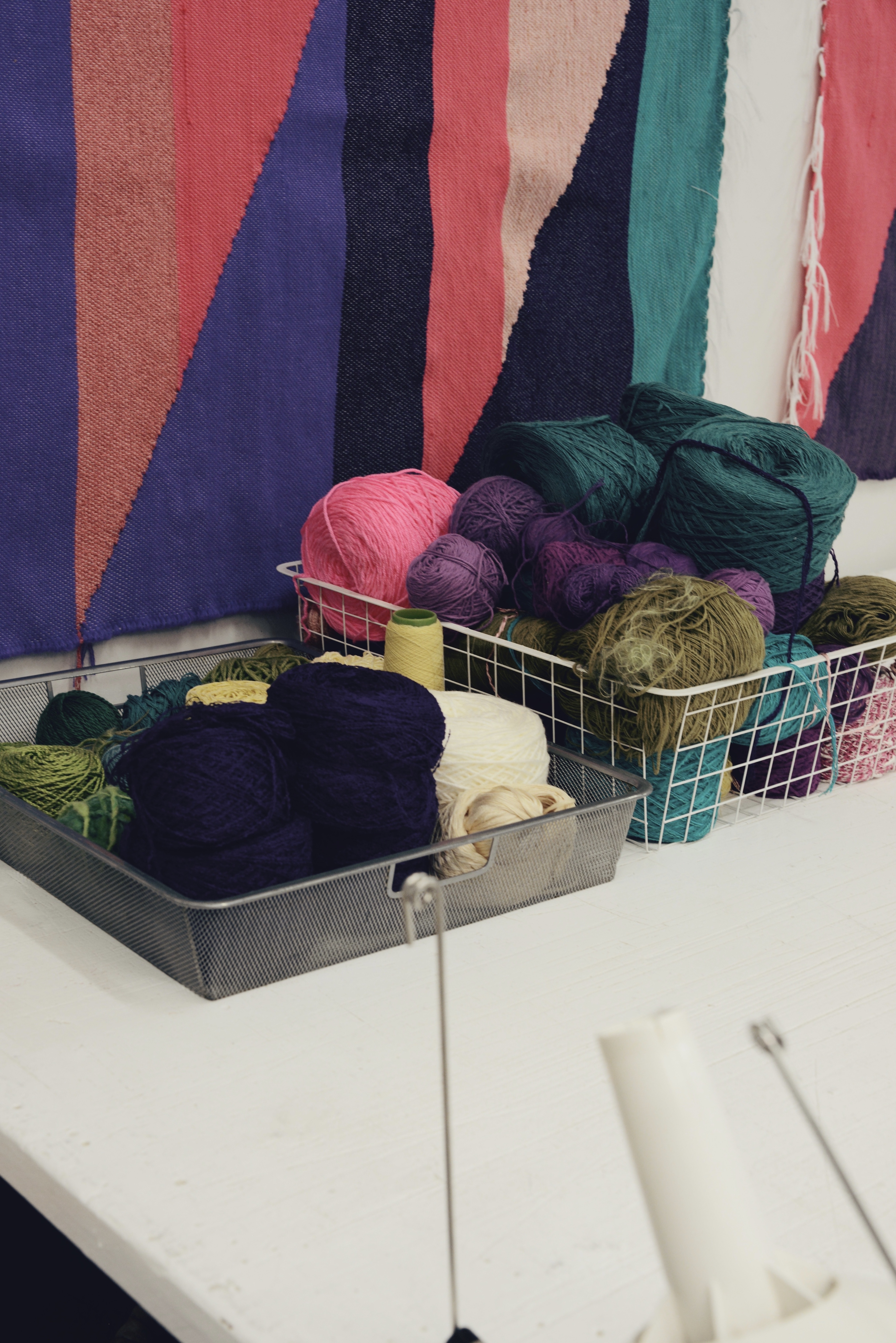 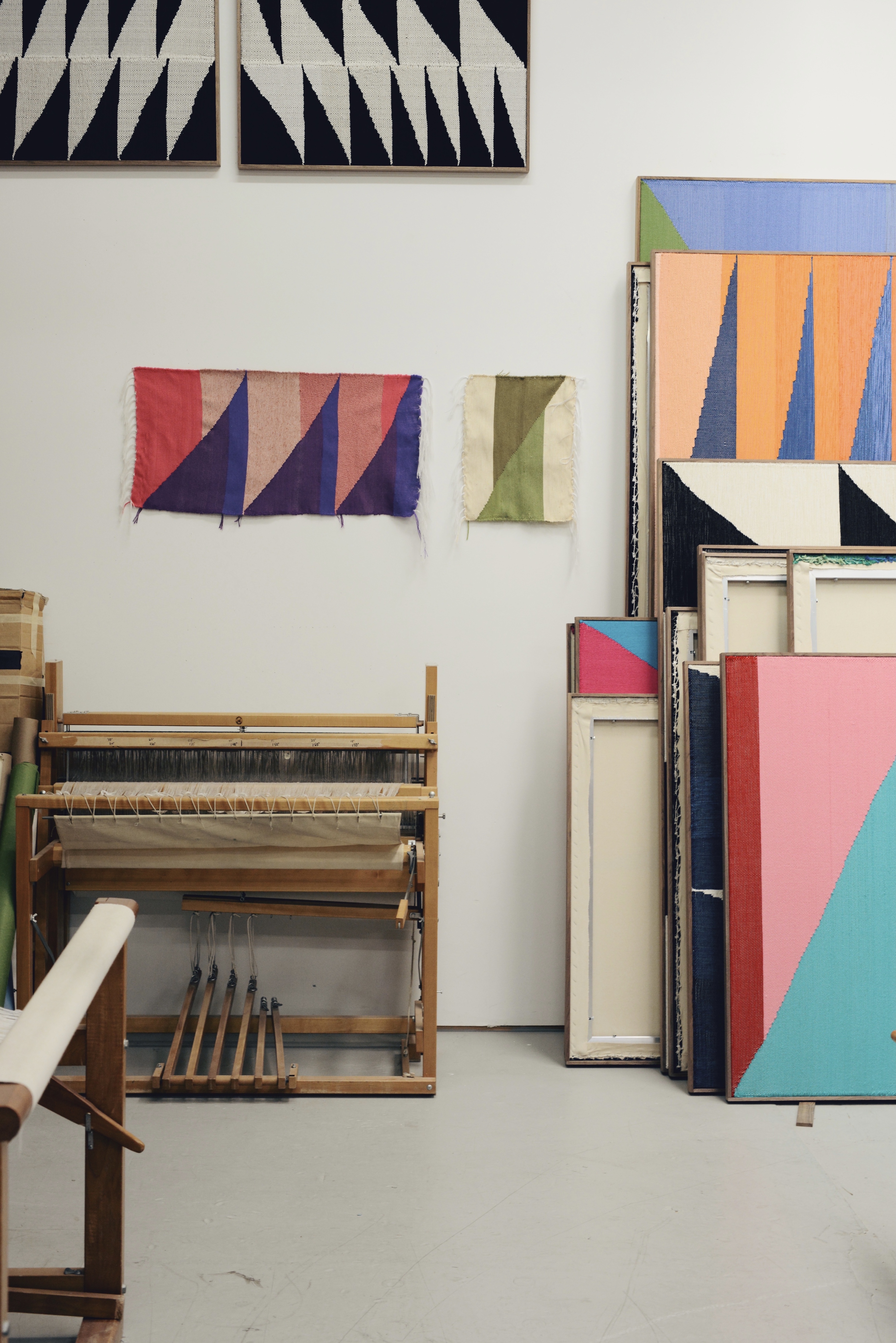 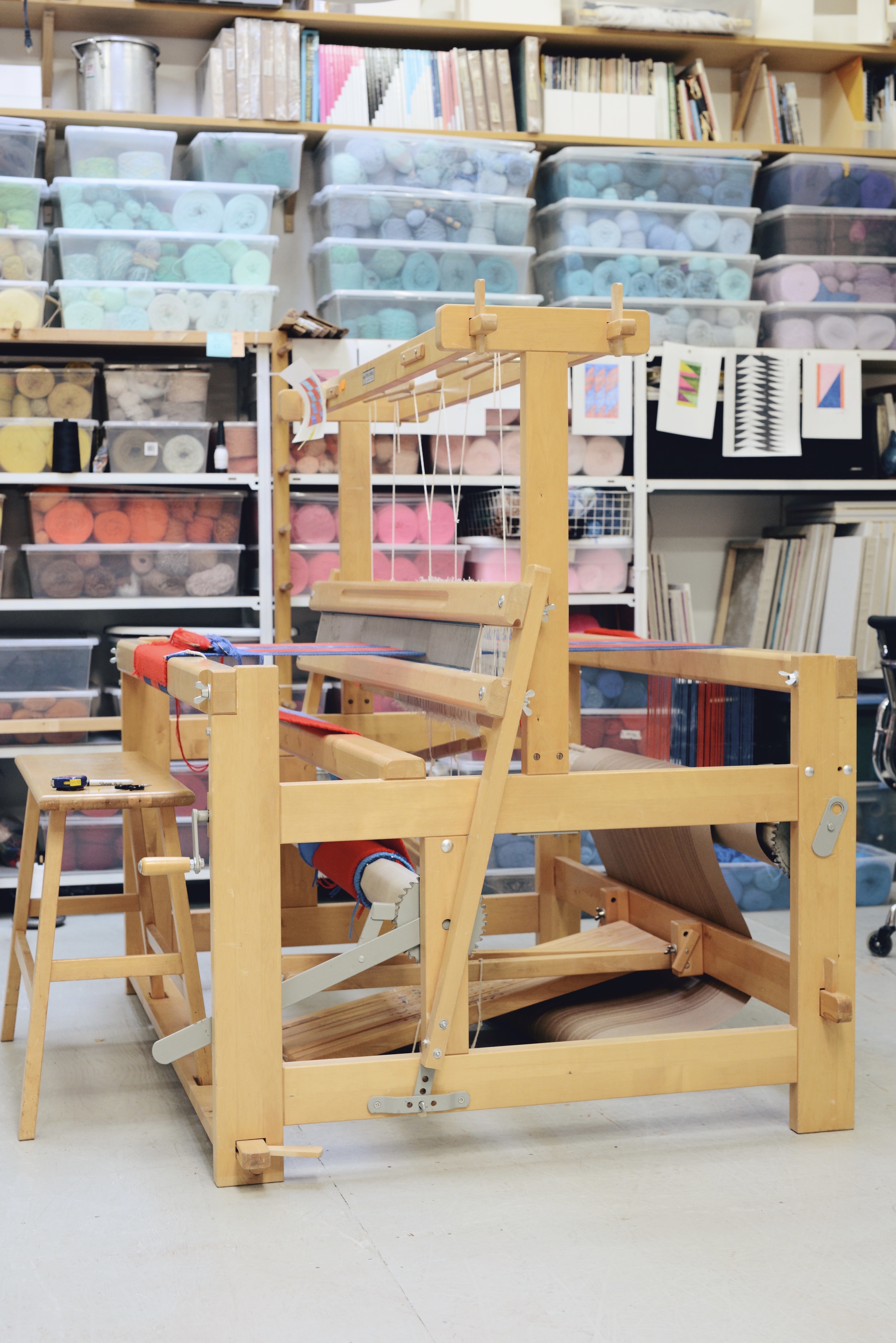 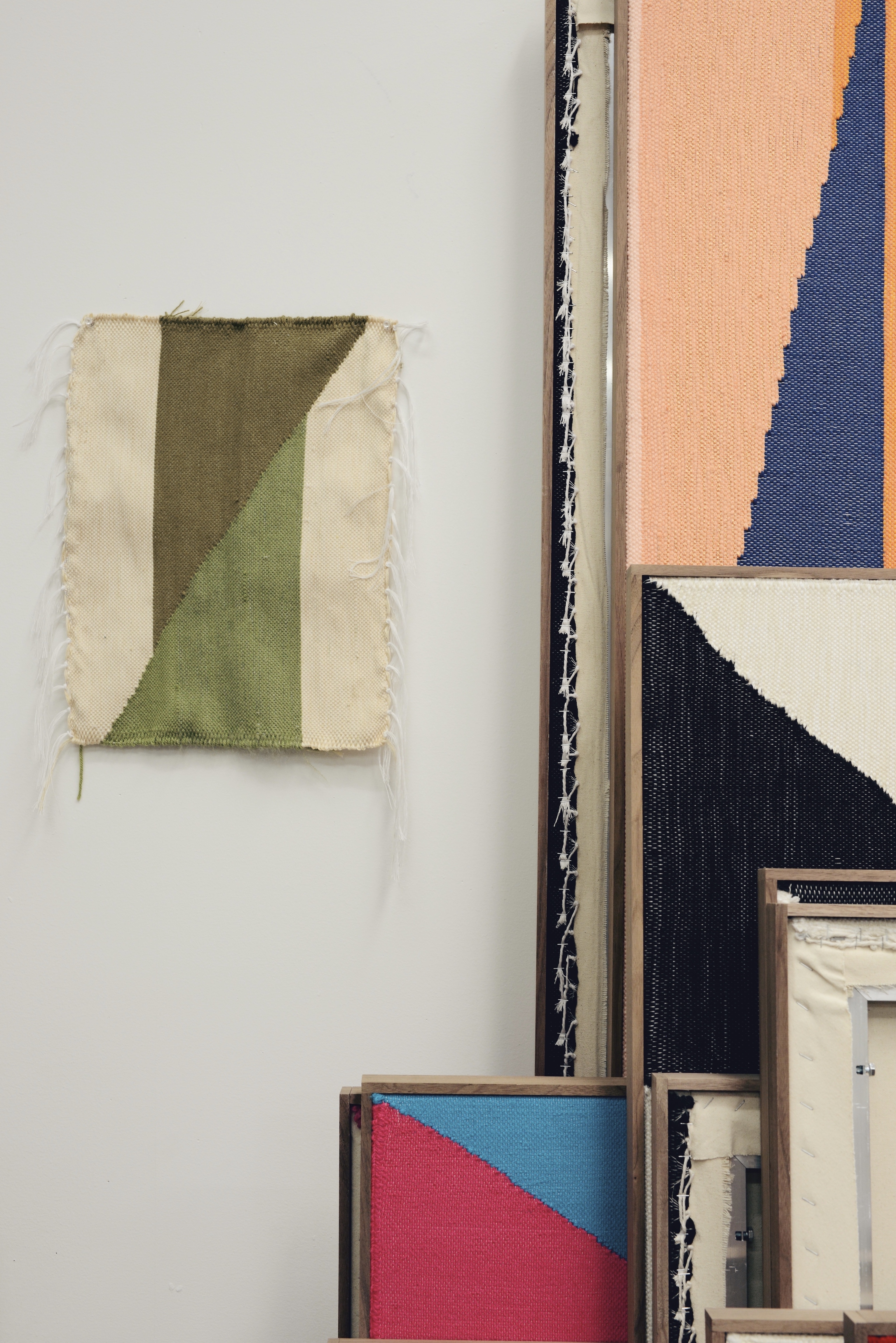 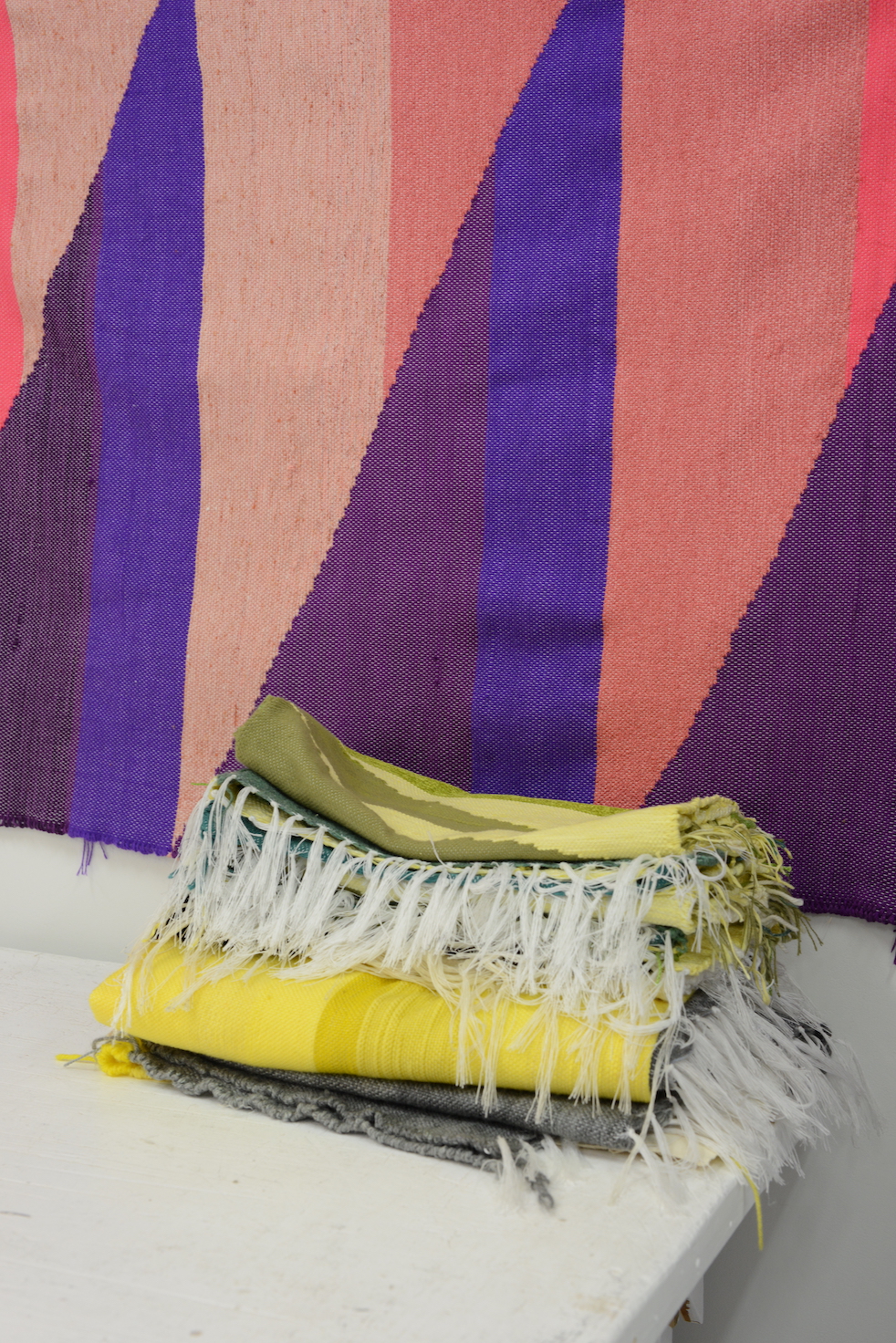 No items found.
Photos taken courtesy of the artist