Cake on the Floor

Woman with Cake. Woman with Scissors. Woman Tangled in CurlyRibbon. The titles of Shannon Cartier Lucy’s paintings only offer tokenistic descriptions, a pictorial pseudo-specificity. These phrases are deliberately simplistic, akin to a cursory Internet search. The suggested interpretations are endless. Google gives 257,000,000 results for ‘cake on the floor’. 604,000,000 for ‘a celebration’. If a good story requires ‘the 5 W’s’ (who, what, when, where, and why), Cartier Lucy vaguely alludes to the ‘what’, leaving the curious spectator to imagine the rest. She has compared her work to the experience of playing the phrasal word game ‘Mad Libs’, where one is prompted to fill in the blanks to create a narrative.

Cartier Lucy’s paintings are enigmatic and strange, awkward and perverse. These vignettes are contradictory and disjointed. They have a cinematic quality, scenes from the avant-garde. Any singula rnarrative is made obtuse, the certainty of reality melted away through her embrace of fantasy and the uncanny. The setting of a party can be inferred by the particular debris and signs of festivities: there is cake and strings of undulating, crimped satin ribbons, but the situation reads as ominous, toxic. An anonymous figure dressed in black clasps a bouquet of pink and white flowers alongside a blood-stained white napkin. A sharp and shiny pair of fabric scissors are being held precariously open. A cake fork is clutched like a dagger. InThe Celebration, a woman lies on her side with her brow furrowed and eyes wide, clutching her head as if in distress, while the protagonist in Soft Rein appears to relinquish control to someone outside the painting’s frame, their hands blocking her ears, while gold tendrils of ribbon spool out from her mouth like a telephone cord. The use of the ribbon as an adornment and a way of accentuating latent violence is suggestive of the red chokers worn by women in the aftermath of theFrench Revolution, anecdotally believed to be a coded reference to those beheaded by the guillotine.

There is a pervasive feeling of claustrophobic alienation. The protagonists are usually alone, their faces are disguised or obscured, often turning their back on the viewer, or they are captured at an uncomfortable close range. Cartier Lucy’s fragmentation of the body follows a fetishistic visual logic. Her cropped framing isolates naked shoulders, arms, a mouth, limbs, or a leotard-clad bottom. Cake on the Floor shows a disembodied hand prodding a chewed-looking lump of decorative red frosting on a half-eaten gateau. In Girl with Icing, the canvas is dedicated to a face seen in profile, the intimate pores of her skin seen in detail, her pale lips greased with residual cream and crumbs. The abjection of these foodstuff images is advanced by Woman in Meringue, the thick and dripping dessert forming a cartoonish face mask while she sucks on her fingers. The splattered meringue is reconfigured as an expulsion of bodily matter, a sugar-whipped ectoplasm.

A woman who is completely naked aside from an ill-fitting, multicoloured hooded PVC raincoat, akin to the type worn by children, appears in two of the paintings. Her partial nudity enhances the suggestion of vulnerability, exposure. In Odalisque, which is titled after the 1814 Ingres painting, her reclining posture and the draped white cloth echoes the original configuration, but the raw emptiness of the black canvas beyond the body signifies something more oppressive or sinister. Cartier Lucy’s work is situated in a liminal space between beauty and horror, the rich surface of the canvas is a distraction from the cruel reality of the uncomfortable scenes being portrayed. The hallowed and aestheticized historical tradition of figurative oil painting is used as a red herring, disguising the strangeness that simmers beneath. 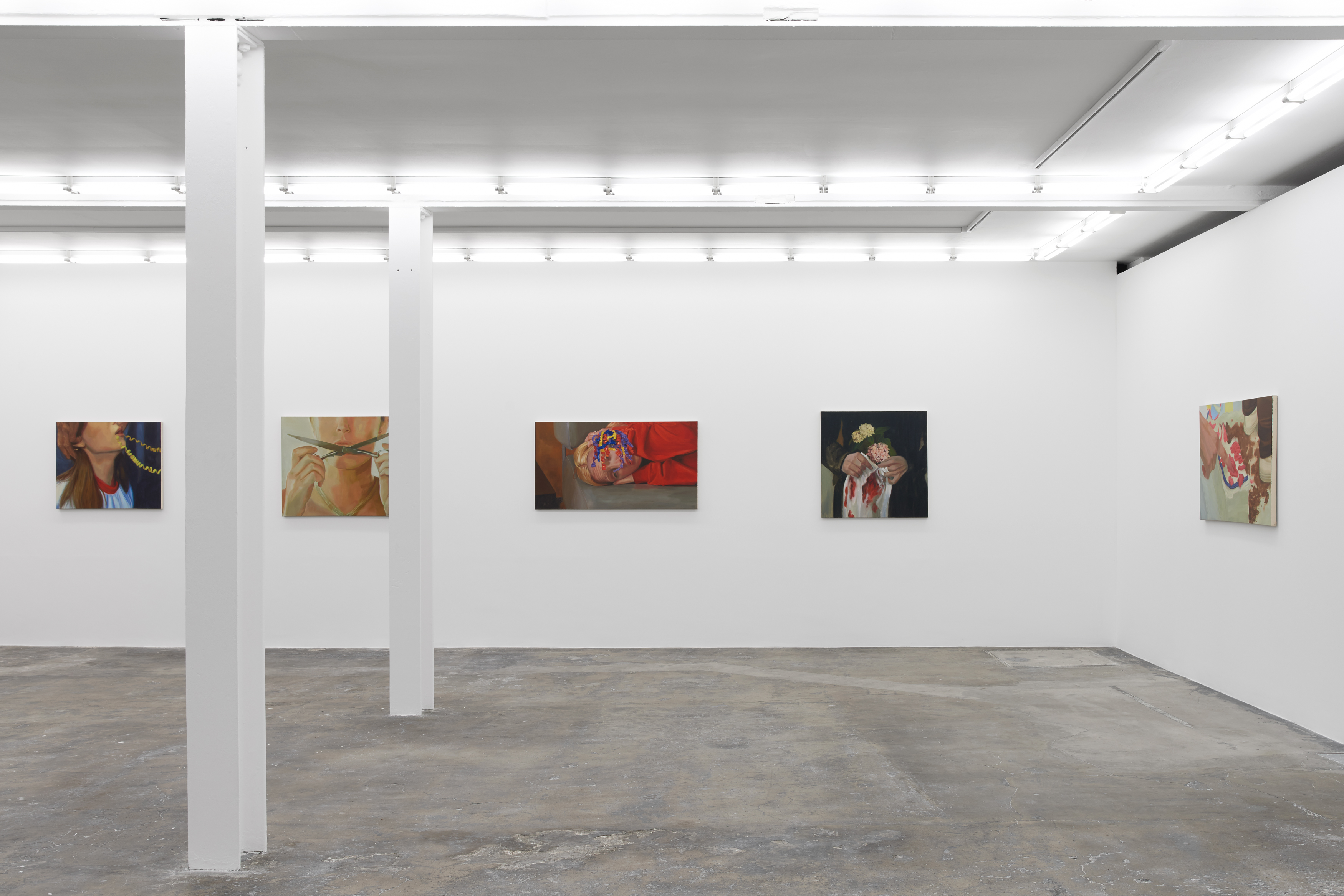 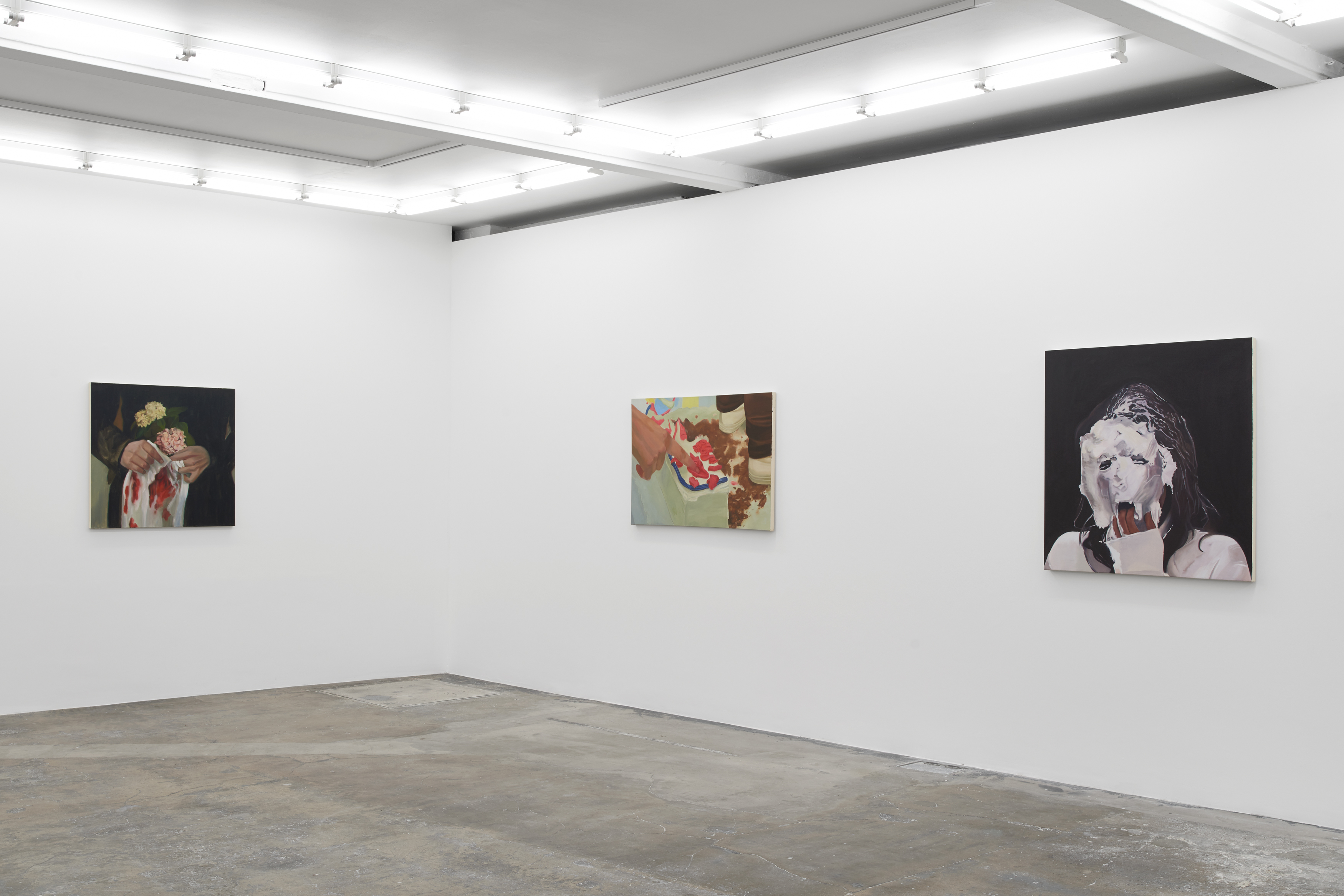 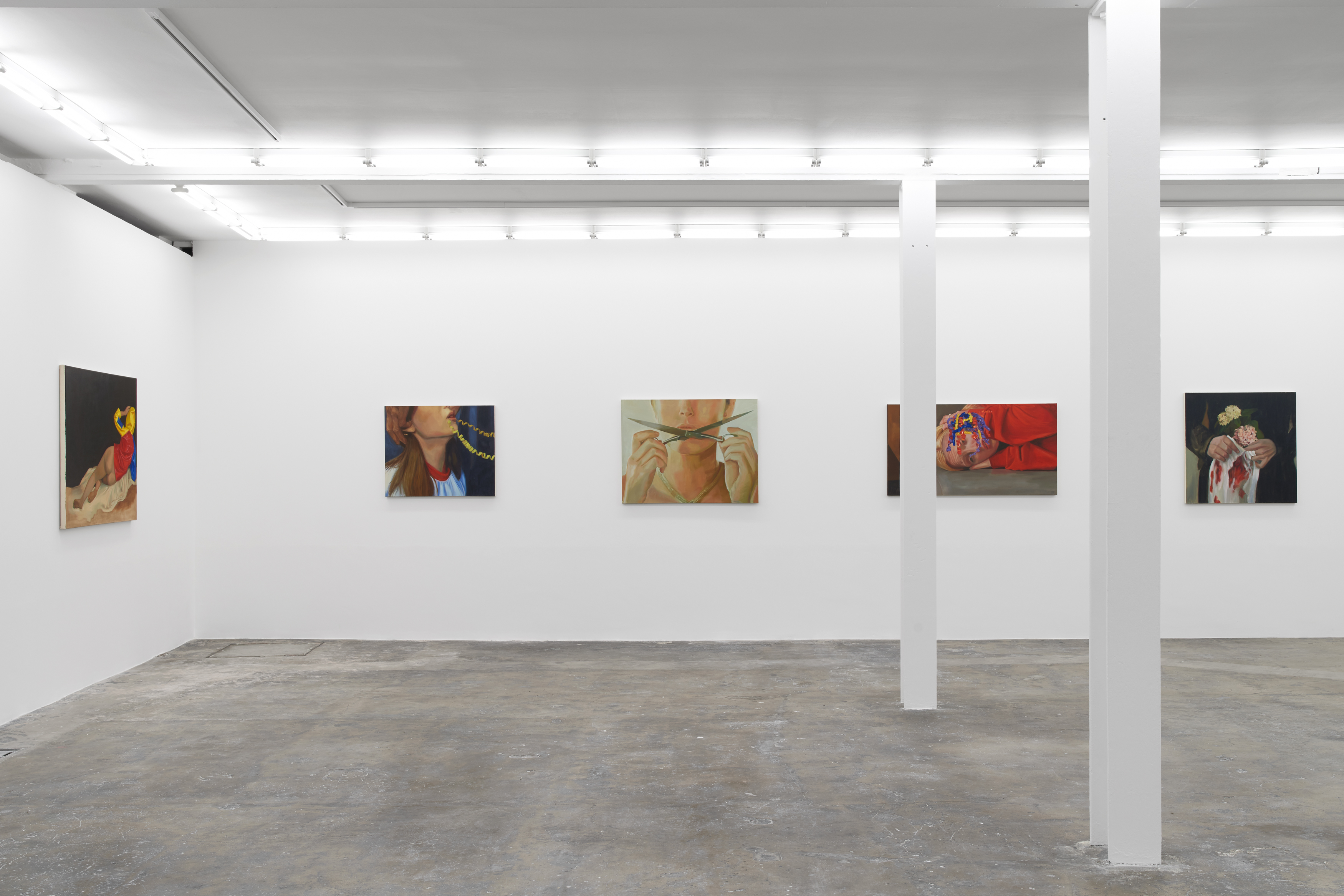 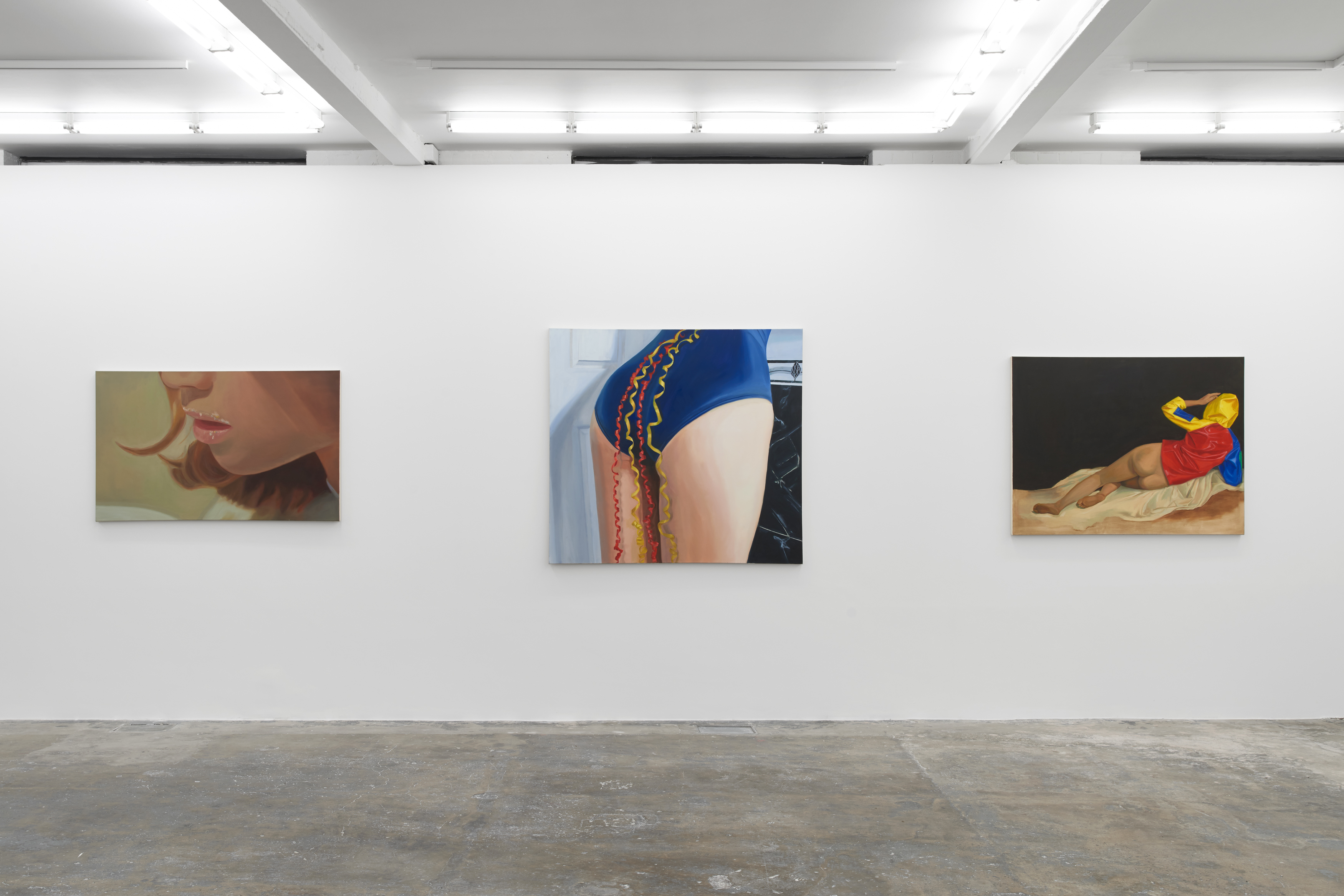 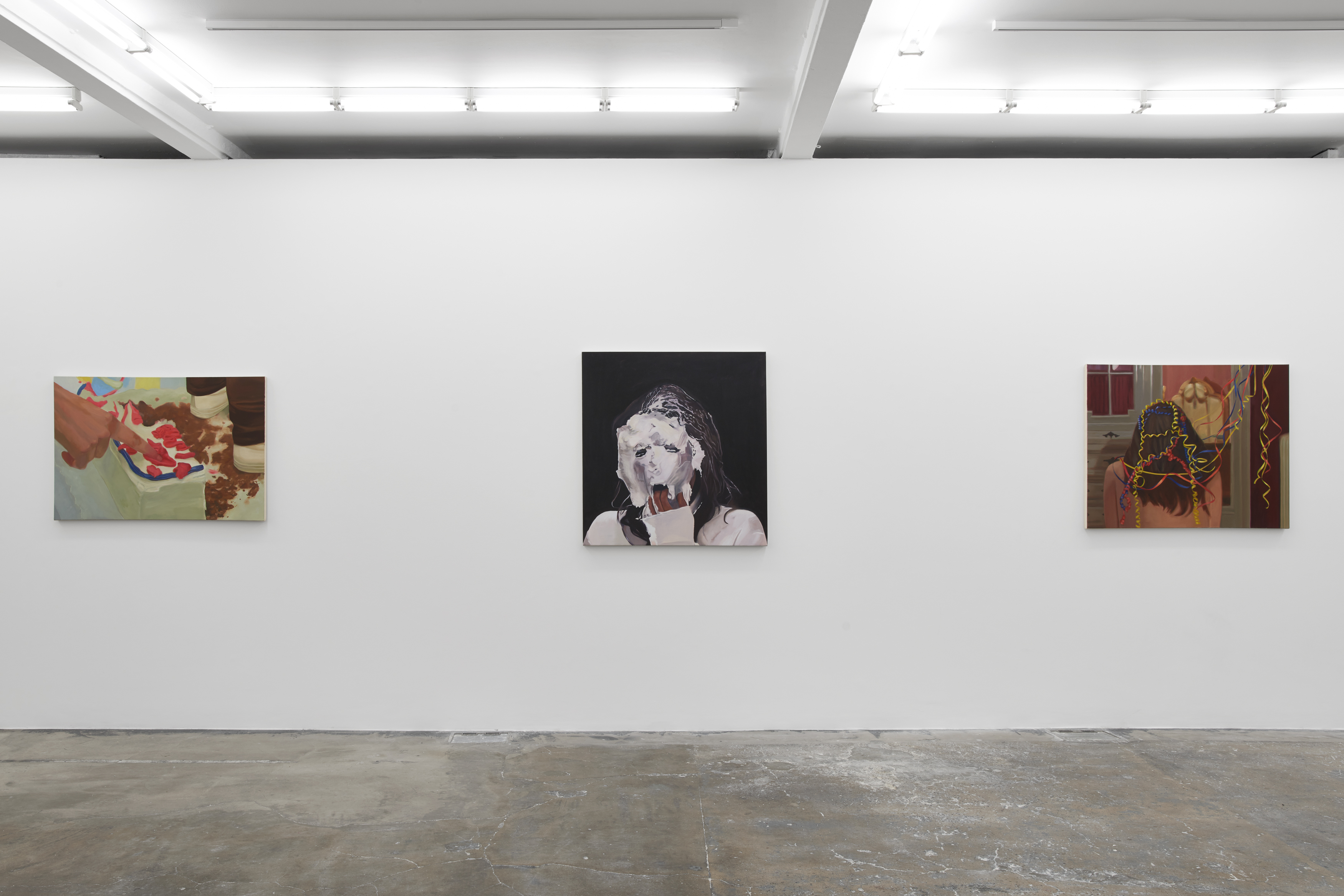 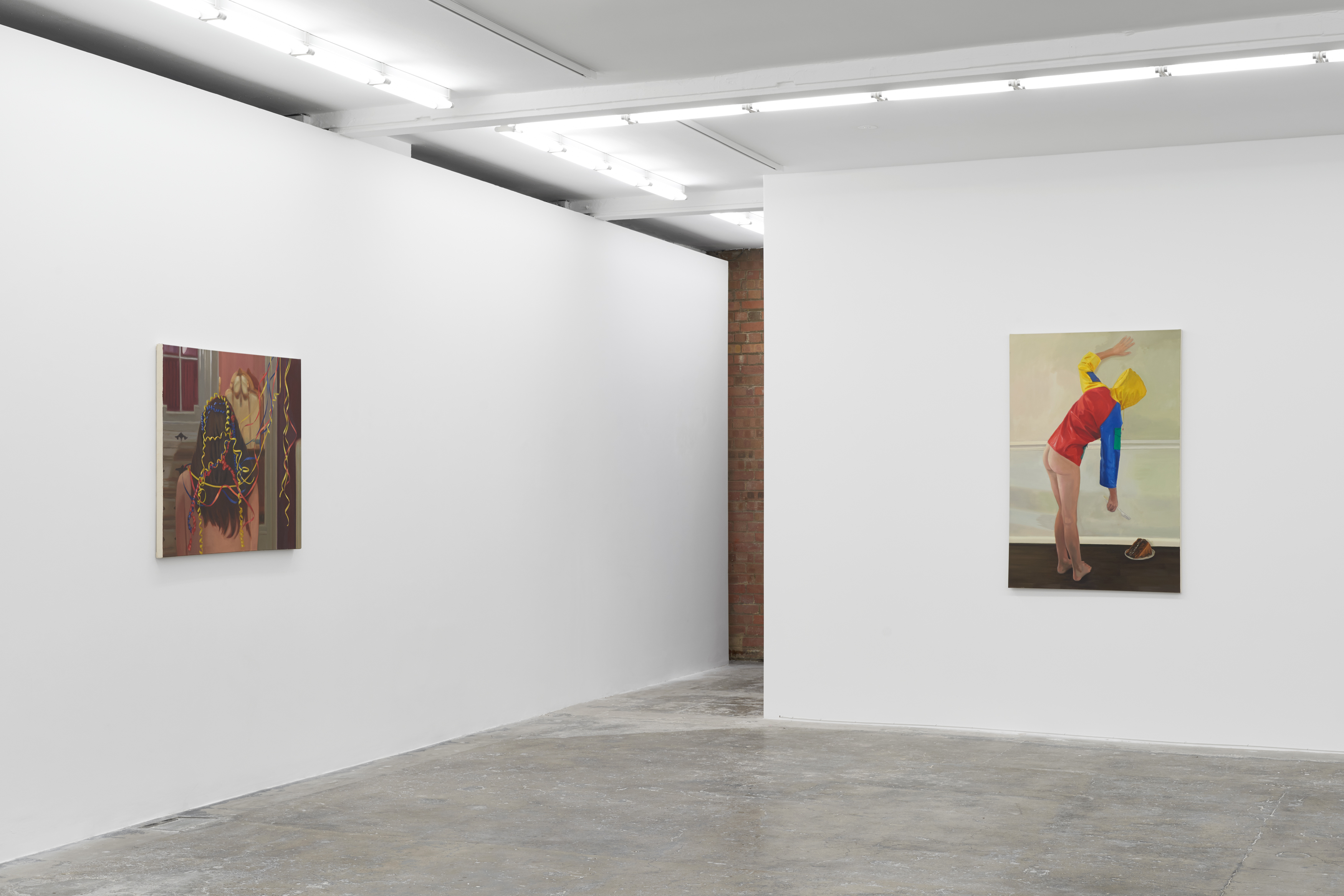 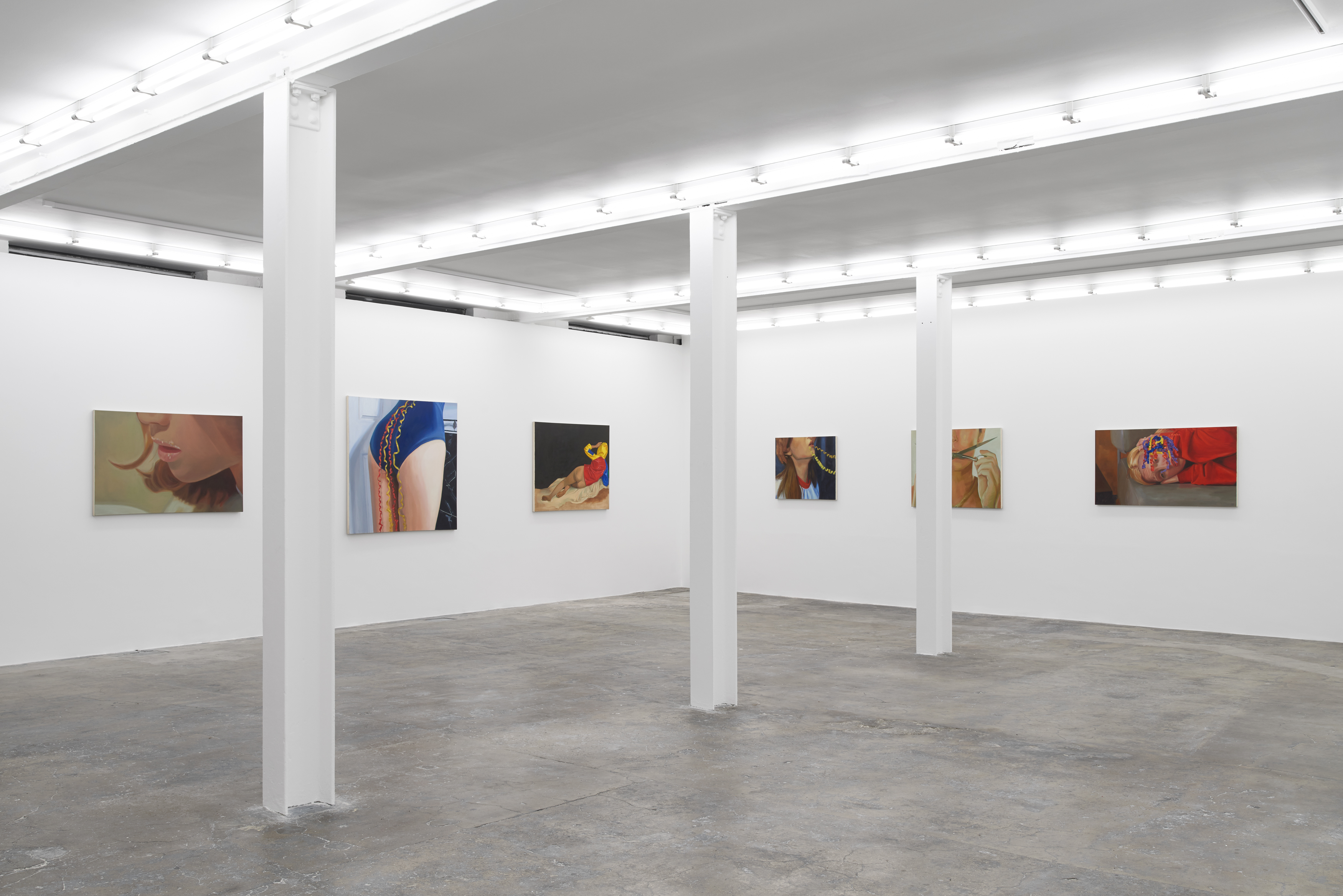