Xippas Paris is happy to announce Invocation by Karishma D’Souza, the artist’s third solo show at the gallery. The exhibition features her most recent watercolor drawings and oil paintings, calling forth for action and opening portals towards other times and worlds.

Karishma D’Souza makes detailed and meticulous artworks, which are carefully composed, trying to reflect the whole in a part and to fit the universe on a sheet of paper or a canvas. The paintings are inhabited with personal memories, transformed into signs and symbols, “layering objects with meaning”. These elements are at times thoughtfully repeated, as if to be fully recorded on both canvas and consciousness. They reappear in a slightly changed form in different artworks, travelling between pictorial spaces and interconnecting, like invisible bridges, into a bigger narrative.

Understanding the artworks like narratives is a key here: the act of storytelling is essential for Karishma D’Souza. Behind signs and symbols, as if behind curtains, hide stories. They are meant to be carefully unfolded, shape by shape, meaning by meaning. A Goan artist, Karishma D’Souza’s paintings often refer to the political situation in India and to social injustice. They speak of those who were chased from their homes so that another factory could be built; of forests eradicated by “hungry ghosts” of capitalism in view of further industrialization; of killings and persecutions and the numerous lies of official propaganda – “drops of blood stand for people slain (dots of red stand for a count of the murdered)”. Other narratives seem to be full of hope, harmony and inner light – a portrait of a friend, reminiscence of a conversation, of a window with a view or of a poetic image. Whatever their impulse, these stories are a reflection of the artist’s experiences and turn the process of image-making into an art of remembering. They are not told in order to forget, to escape from the inconvenient reality into some imaginary and perfectly shaped world. They are narrated for the viewer to remember and prepare a soil on which a simple story may reconnect with a bigger History, and take root, turning into a Myth.

Although the images tell different stories, some narratives reappear and seem interconnected. To the narrative of a forest and the ideas of growth and rebirth, eloquent in her previous exhibition with Xippas Paris (“Ancestors”), the artist adds the narrative of the ‘ocean’: a source of life and vitality, enabling introspection – an inner travelling towards the most profound layer of the self. The ‘Ocean’ also implies the idea of a distant land and that of a journey, physical or spiritual, through space and time. It carries us away, while allowing us to stay connected as we maintain the capacity of looking back. In this sense, the ocean conveys a feeling of being “in between” and functions as a portal.  Other narratives mobilized are that of ‘frames’ (“This Forest: Anthills”, “Hearing: Listening well one found solace”), ‘stages’ (“Ocean Words”, “Depth to recognize”) and ultimately – ‘theater’, and the desire to be involved, to call for action. Images therefore become places of action and engage in movement. Action unfolds inside the frame and the pictorial space fills with spirits (“Hungry Ghosts: Movement Through a Forest”), liquids (“Landscape witness”) and phantoms of thoughts (“Portals-3”).

This wish for action is nourished by the artist’s close interest in Dalit literature, which is silenced by official propaganda and kept out of schools. Learning about Dalit literature, reading its touching stories, leads to question erasure and manipulated forgetfulness. It inspires the artist to bring memories back, to make, for herself, the invisible visible again, as if she were following the guidelines of the Dalit movement

for which literature or any other form of art should be engaged politically and encourage action. This seems to be even more crucial in Karishma’s most recent works, her previous ones being according to the artist “more similar to settings”. As they get even more complex and narrative, they embrace movement and action, calling forth – an Invocation. They function as songs or prayers: an act instead of an object. If a prayer is an inner dialogue, could a painting, seen as a redemption prayer or song be a form of a silent conversation? In the artist’s words “To share, to think together”. “To understand everything better”. And ultimately – to remember.

Karishma D’Souza (born in 1983 in Mumbai) lives and works between Lisbon and Goa. Having graduated from the University of Baroda, she has shown her work in Europe following a residency in Rijksakademie in Amsterdam in 2012-2013. In 2017 she was granted residency in Skowhegan, Maine, USA. 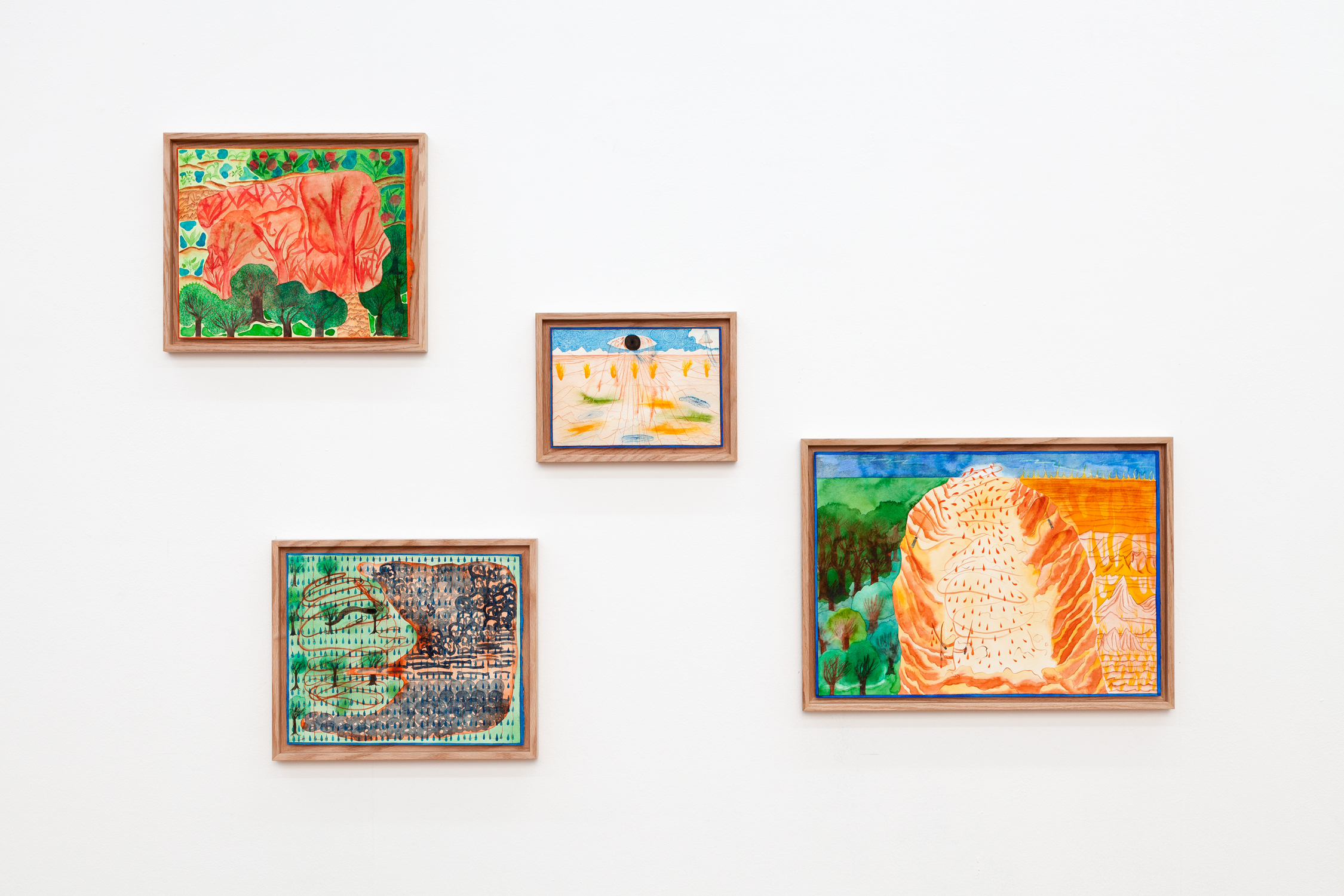 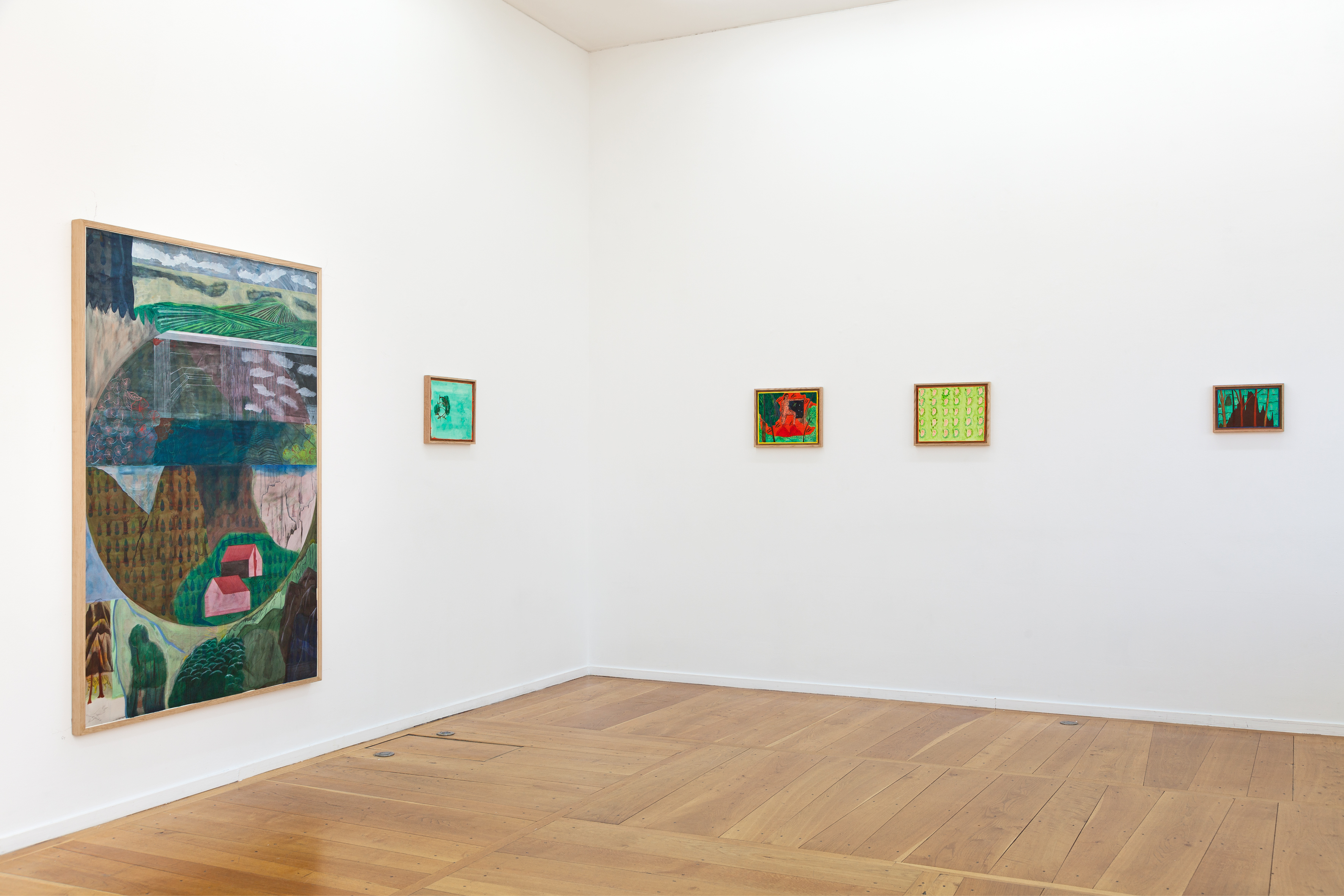 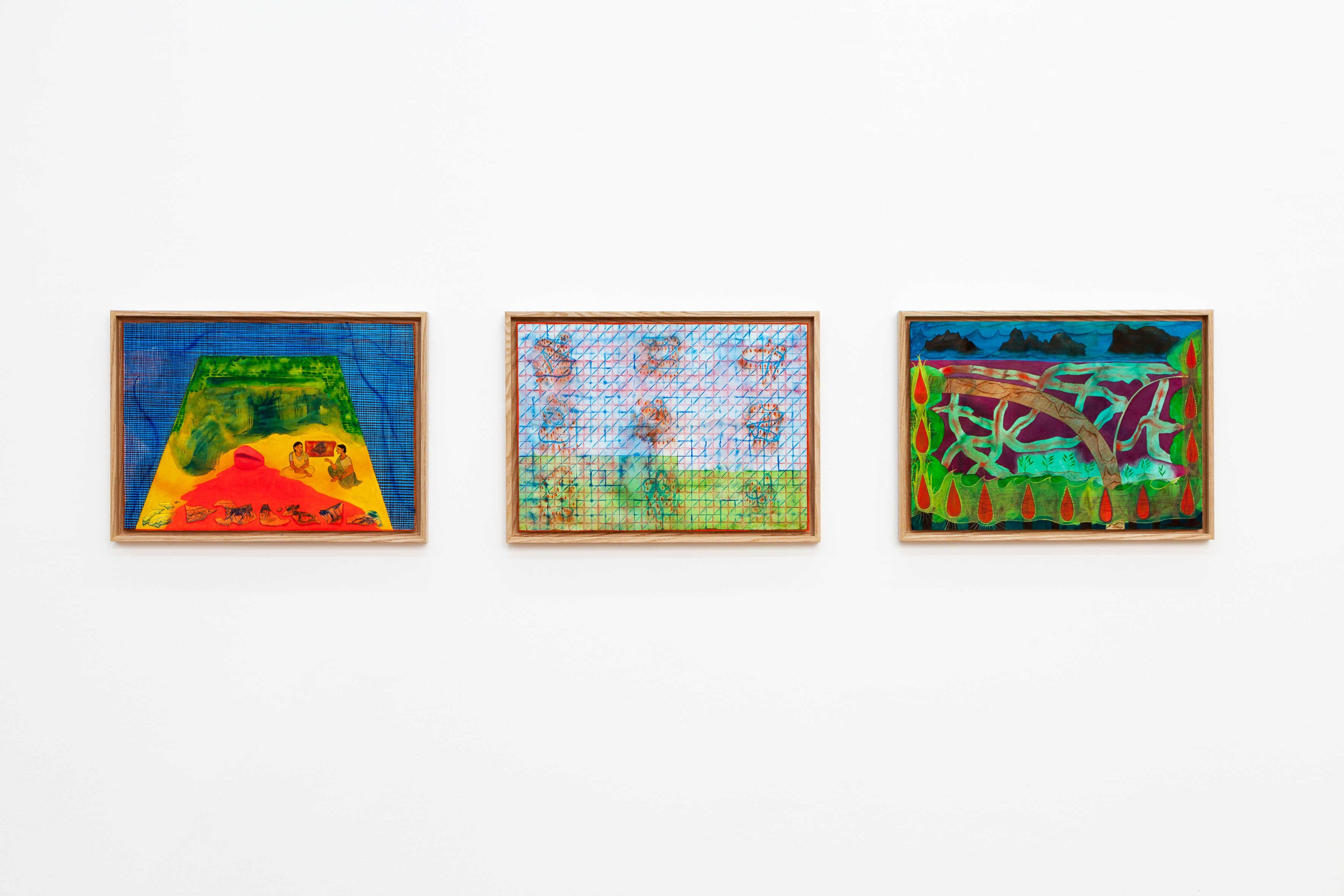 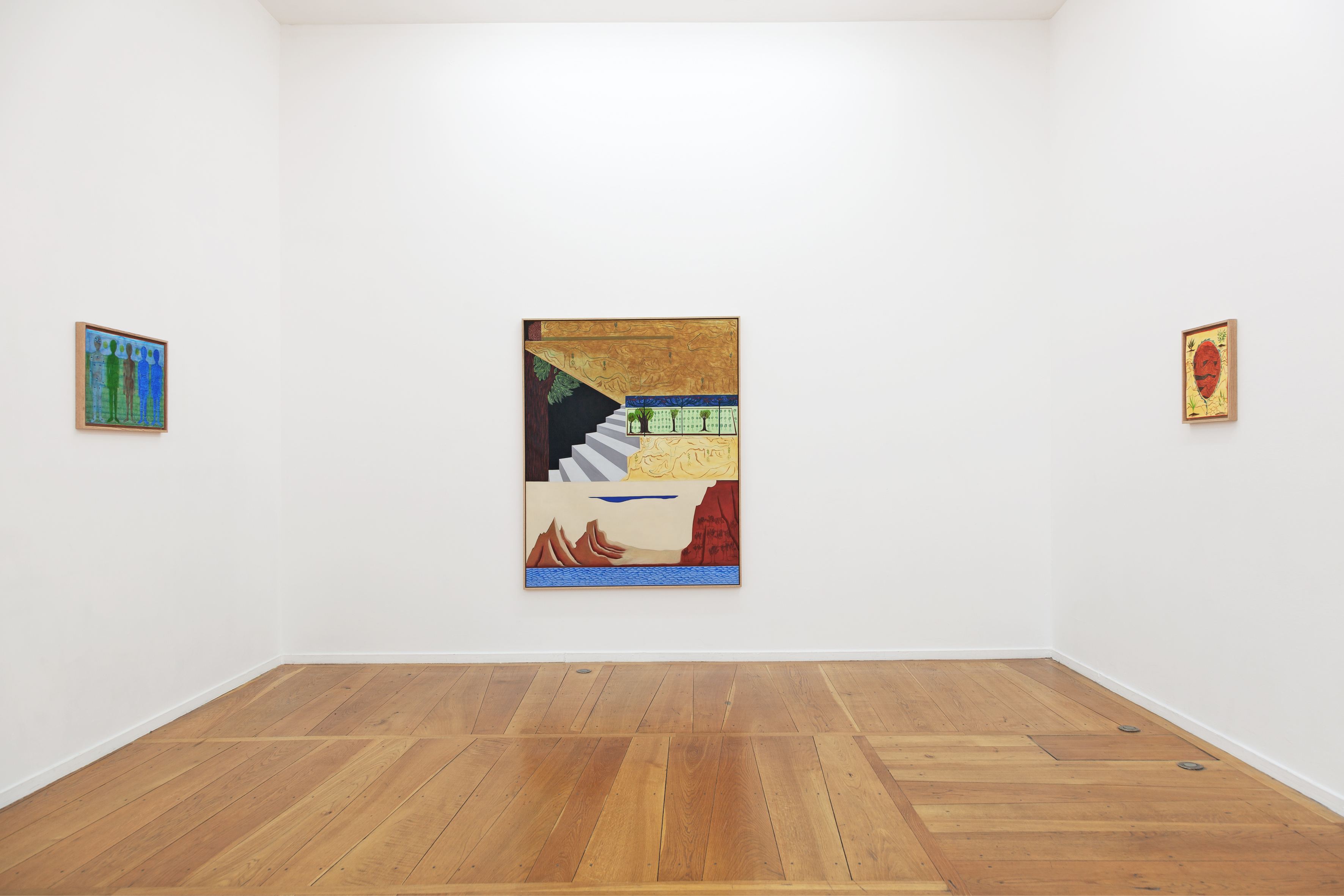 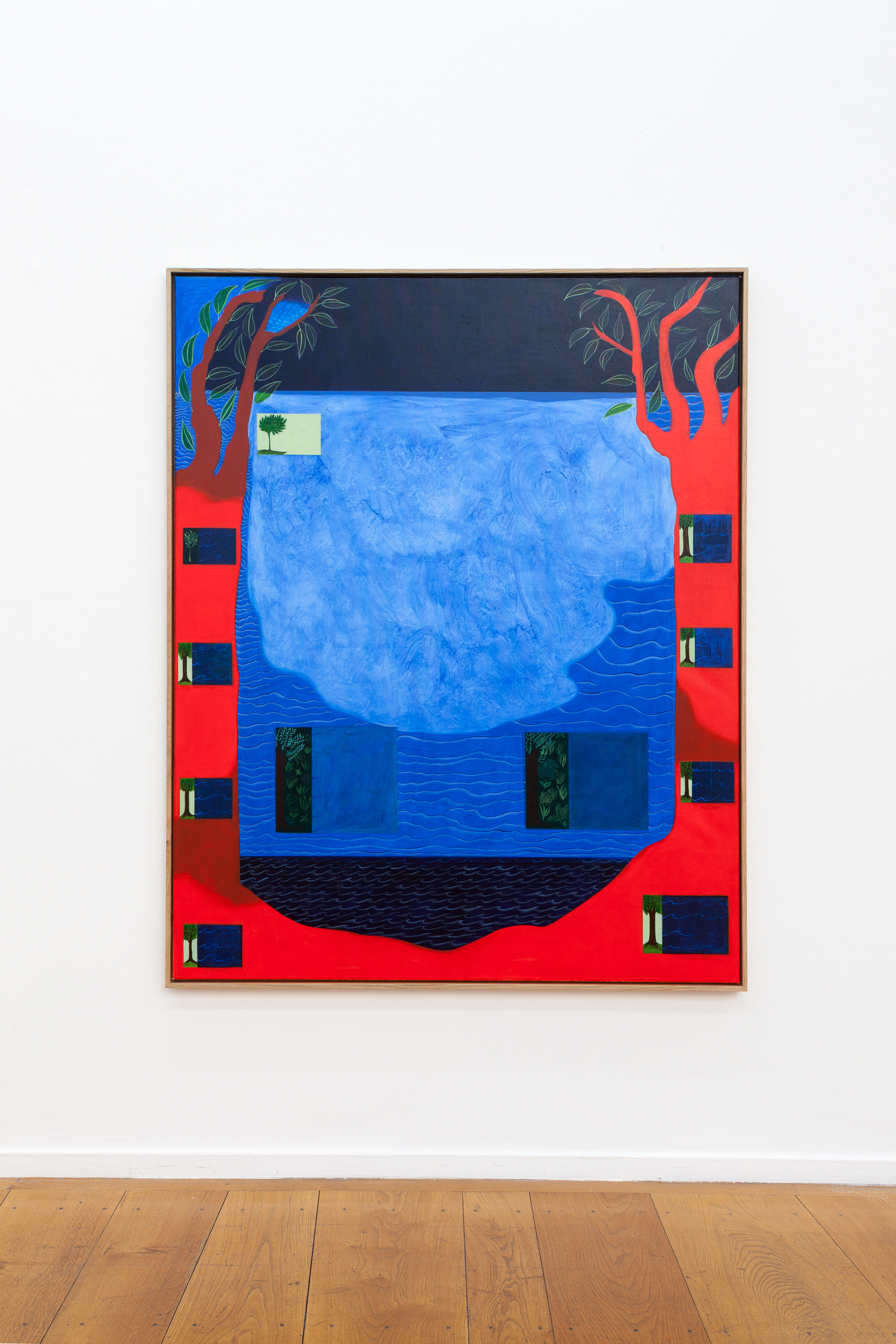 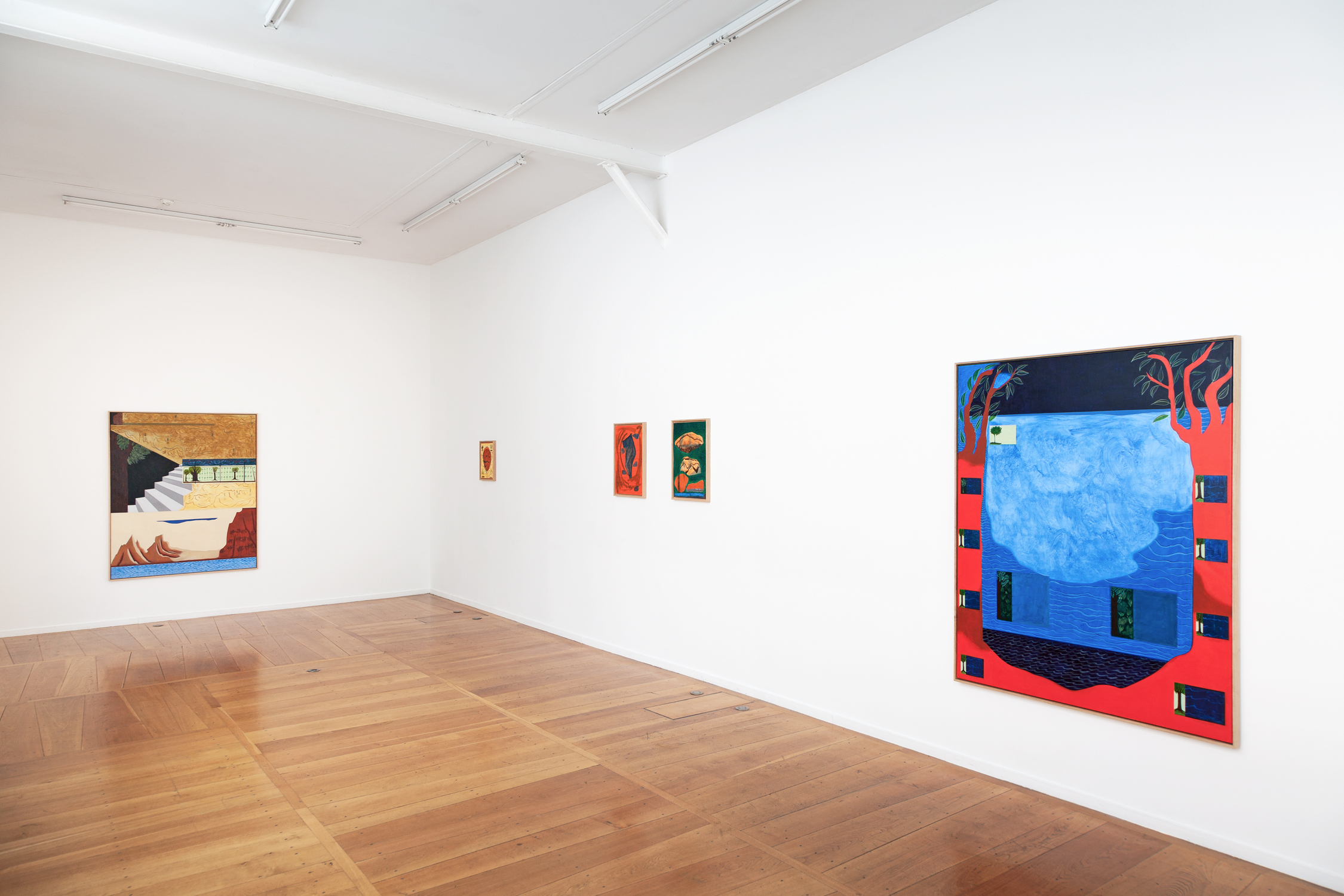