Almine Rech Shanghai is pleased to present Sequitur, John M Armleder’s fourth solo exhibition with the gallery. In 2019, Armleder took part of the exhibition Abstraction(s) at the Song Art Museum in Beijing. Sequitur will take place from July 9 to August 14, 2021.

In the second half of the 20th century, Chinese art forms continued to be ideologized in the recurring waves of political movements. In different periods, abstract painting, and art in general, have been eulogized by contemporary artists as symbols of freedom. The liberation movement in the late 1970s propelled the diverse exploration of a generation of Chinese artists in the following decade. Active in both practice and theory, these artists were later described as the “85 New Wave”. Soon after that, due to the shrinking of civic space in the late 80s, some academic artists espoused the idea of “linguistic purism”, where artistic forms and techniques are separated from the substance and concept. They overprioritized forms and techniques, even equating them with art itself. They also criticized the “85 NewWave” for its inclination towards theory, and concept over the exploration of artistic language.They even brusquely put the two in direct opposition, resulting in a creative dead-end that treated language as a means to an end. This binary thinking reverberates in the present; today’s art viewers are still befuddled by this limiting dichotomy between technique and concept, form and content.

Evidently, we cannot apply the same outlook when we look at the paintings of Swiss artist John M Armleder. Since the 1980s, he has been painting by pouring and splashing, which are both action-based and chance-operated, just one part of his colossal creative system. To understand this part of his artistic creation, the vantage point of traditional painting would be inadequate. Armleder's paintings do not attempt to find a breakthrough in the lineage of abstract painting, nor does he attempt to recapitulate the dichotomy between art and its form. Armleder was born in 1948, belonging to a generation of artists who grew up in Europe after 1968. Since the 1960s, Europe and North America had entered into the period of late Capitalism, in which the cultural logic and thinking of Postmodernism began to spread. Postmodernism provided an opportunity and framework to reflect on modernization and its philosophical premises, blurring the boundaries and divisions between all known categories, while putting aside the hierarchies and narratives of meaning making and re-examination. In art, there was no single style that dominated, all styles and visual vocabularies were validated. Artists could excavate visual representations from the past, folk culture, and the present. They no longer needed to inquire after the known hierarchy and contextual meaning of these visual materials and images. Using ready-made objects as material, and appropriated styles and images as method, artists raised original philosophical propositions. They even used appropriation to imply that the concept of originality was no longer relevant.

Armleder was deeply influenced by Postmodernism and participated in the Fluxus movement in the 1960s and 1970s. As a teenager, he encountered John Cage at a music festival. Cage's ideas and practices had a profound impact on him. When he started his creative journey, he was deeply attracted to Fluxus concepts and creative methods: focusing on the process rather than the end result, while constantly introducing random and unexpected elements into his creative process. He believes that the work itself is dynamic, from the process of making to the act of viewing, always simultaneously engaging in a multitude of mediums and techniques: painting, sculpture, furniture design, performance, curating and so on. In the eyes of critics, his works resonate with often polarizing artistic trends:suprematism, minimalism, new geometry, pop art, appropriation, action painting, and even relational aesthetics. But for him, the Fluxus spirit is his true origin.

In 1969, he and his childhood friends Patrick Lucchini and Claude Rychner co-founded the artist ensemble Ecart in his hometown of Geneva where they produced publications and organized exhibitions, and performed Cage's scores together. All members shared the copyright, resisting the oneness of the work. They also designed actionable plans that can be implemented in a variety of ways. In the mid-1970s, Armleder began to make works that took on the characteristics of suprematism; he believed that as a symbolic language, suprematism’s call for a new society and its revolution prospects were still relevant. From the perspective of Postmodernism, he believes that suprematism, geometric abstractionism and other modernist styles are all symbols that can be easily found in the historical-cul-tural marketplace and be reapplied. Far from being sacred or mysterious, these forms can be freely repurposed, generating meaning in the process; the newly generated meanings would, in turn, define our relationship to them. Not only can the symbols provided to us byModernism help us understand the world, but they can also be a palette for re-creation.Imprinted with their existing meanings, the images, forms, and methods in Armleder’s art accrue new meaning through his act of appropriation, which loosened art history itself into a dynamic process, rather than enshrined it as an absolute authority. By dispelling the myth surrounding the evolution of art and the linearity of art history, Armleder finds freedom and evergreen imagination.

Armleder's appropriation of the visual material from 20th century Modernism is not at all a mere act of nostalgia. He believes that the contemporary nostalgia for Modernism is partly due to the erroneous belief that folks living in the past could grasp what was happening in front of them, with the ability to continuously call for the arrival of "tomorrow".The all-encompassing spirit of Postmodernism brings about ideas that are opposed to the tenets of Modernism: doubts about progress, anti-elite tendencies, without the belief in any single theoretical framework, grand narrative or conclusive explanation. Armleder is a follower of Postmodernism. He believes that we are not only living in the science fictional scenarios in the Modernist imagination but have far surpassed it, even once declaring:“because of such drastic changes, we should assume that the 20th century had begun as early as a thousand years ago”.

Armleder has constantly revisited and introduced 20th-century Modernist materials in his paintings, sculptures, and furniture. Since the 1990s, when he was making large-scale exhibitions, he always included other artists’ works in his own show. Of course, we should still consider these exhibitions as a part of his oeuvre. In one exhibition curated by the artist, he piled up ready-made objects, used in works by artists since Duchamp, in a corner of the exhibition space including Duchamp’s bicycle wheels, as well as neon light similar to those used by Dan Flavin. He delegated the decision-making power to curators from the hosting institution and asked them to add to the content of the show. He piled up these ready-made objects that had played a role in other artists’ works, as if they were trash about to be thrown out. In another room, he hung up stippling paintings made by other artists, and later painted dots directly onto the wall where these paintings were hung.He regarded these objects and paintings as standard measurement in contemporary art, describing this approach as a "pseudo-gimmicky idea" - trying to appear smart but failing in doing so. These conceptual techniques were directed at the pretentiousness of academia that has been prevalent in many exhibitions.

Armleder applied the curatorial method of inserting into existing premises or interrupting them to his creative process. He combined existing works, objects, and meanings with paintings and objects he made into new works of art. Take his furniture-painting installation as an example, he juxtaposed his monochromatic paintings or abstract paintings with ready-made furniture, turning the paintings into furniture accessories. On another occasion, he simply hung furniture and paintings side by side on the wall, subverting the conventional way of viewing. In his creative process, Armleder is interested in destabilizing and redefining existing concepts and ideas, the objects themselves are not central. When he was invited to make his paintings into carpets, he chose two early paintings from an old collection. Over time, the colors have faded, and the images have become blurred.

He simply gave the design to the carpet manufacturer without retouching and asked the manufacturer to produce carpet designs according to the standard size and procedure.After they were made, he laid out the carpets on a low platform to be displayed, then hung them on the wall, and in the end spread them flat on the floor. During the entire process, chance operation became the only thing that was certain.

Chance has been an all-time meaning-making mechanism in Armleder's works. In another exhibition he curated, he designed the same layout for three rooms in the museum, placing the same type of objects in the same locations. The unity of arrangement made the audience feel strangely familiar when walking from one room to another, but this constructed coincidence became elusive due to differences in specific items. Unfathomable quality is a rhetoric of art, something that Armleder has always sought after. He continued to enrich the rhetoric of art and expand its boundaries by parasitizing his own ideas and practices in the creations and ideas of others. During a solo exhibition at a gallery in Zurich, he replicated the entirety of a previous solo exhibition by another artist, only replacing the name of the exhibition with his own name; he also handed over the entire space of an art institution to an interior designer, who was asked to determine the content and form of the exhibition. With these practices, Armleder upholds a particularly Fluxian attitude:indeterminacy—fluctuating between seriousness and a mere joke.

Chance also serves to generate forms in Armleder's works. Since the 1980s, he has poured, sprinkled, splashed, thrown paint and materials of various textures on the canvas, creating a series of paintings with the characteristics of action painting. He would put the canvas upright or flat on the ground and pour a whole bucket of bright acrylic paint on the canvas. Some of them flowed down with gravity, whereas some were condensed into lumps. He would then sprinkle shiny industrial paint and powder on top, as well as colorful confetti, sequins, and other materials. He would lay the canvases in a row and paint them at the same time. His creative process looked so effortless, so nonchalant, and full of humor, lighthearted, just like a play. It seems that in addition to creating "accidents"and "randomness", the artist had given away all power in terms of visual language. These "random" works constituted a playful, hybrid, eclectic, and unexpected "supermarket of forms", just like how Armleder described his own works. This characteristic is also one of the most prominent features of Postmodernism.

The liberation movement, and reform and opening in 1978 brought China into a historical moment where political discourse became faded and blurred, and the collective imagination of other possibilities became completely activated. When international dis-course on Postmodernism swept over China, the Chinese art world in the 1980s thirsted to be a part of an art historical narrative dominated by Western Modernism. At the same time, it found a vision that was self-liberating. Between 1986 and 1987, a series of "anti-art","counter-cultural" art projects with Dadaist features appeared in different Chinese cities.Some artists deployed temporary installations to intervene in urban public spaces. They burnt their own works, moved trash into art institutions as works to be exhibited, invited performers to perform actions devised by the artists, made paintings by letting snakes wriggling on the canvas, and so on. These works challenged existing ideas of art, removing the boundary between art and life, and promoting radical experimentation. But soon, these explorations faded away due to the tightening up of ideological control, artists were unable to maintain momentum in experimenting with art.

Armleder’s life-long art making has always been centered on interrogating and broadening the boundaries of art, rather than establishing a definitive artistic style. Postmodernists insist on introducing noise into every channel of communication, striving for freedom, calling for imagination, and liberating creators from the increasingly insular and paralyzing dictatorship of consensus-making. That is an eternal spiritual mission for all creators. 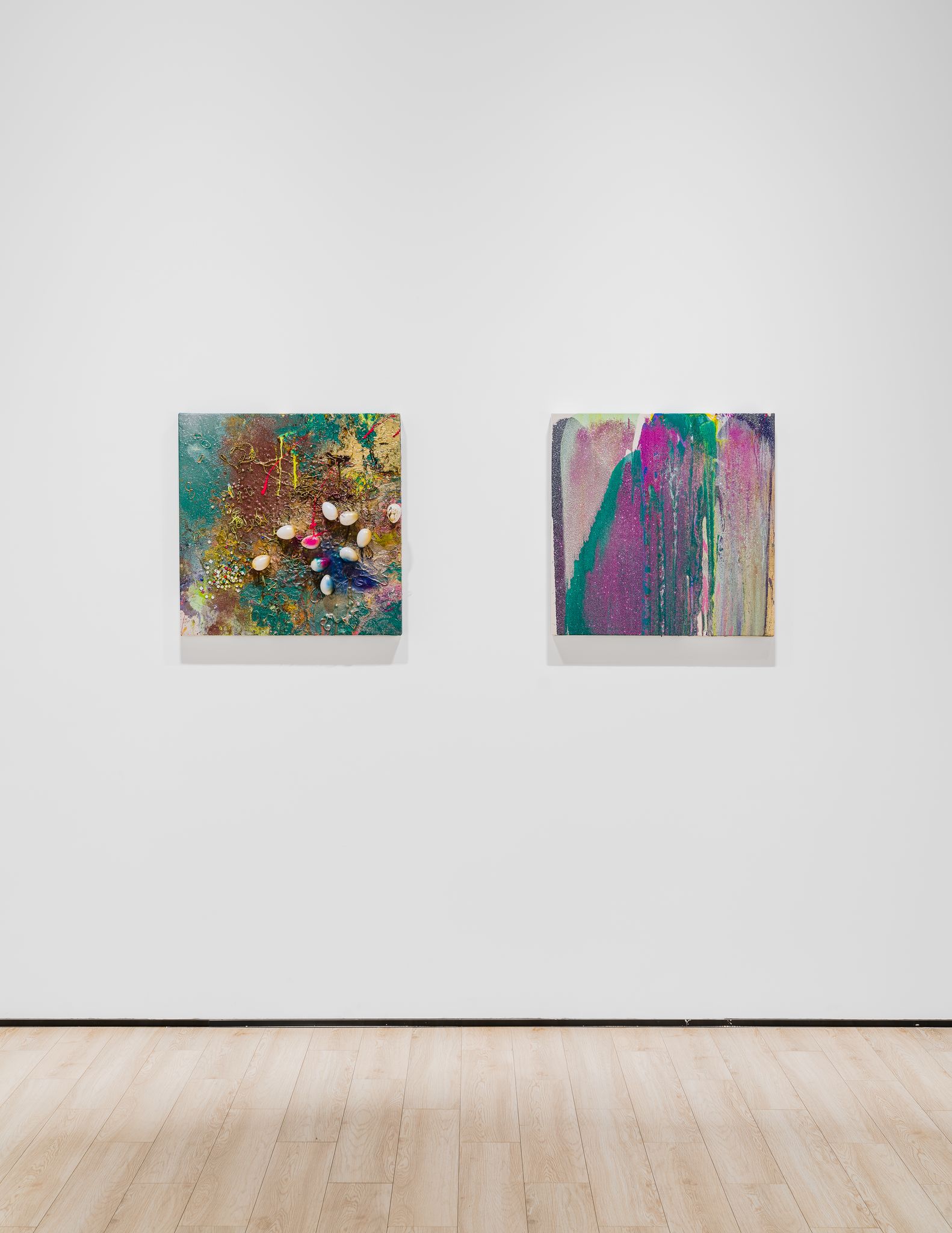 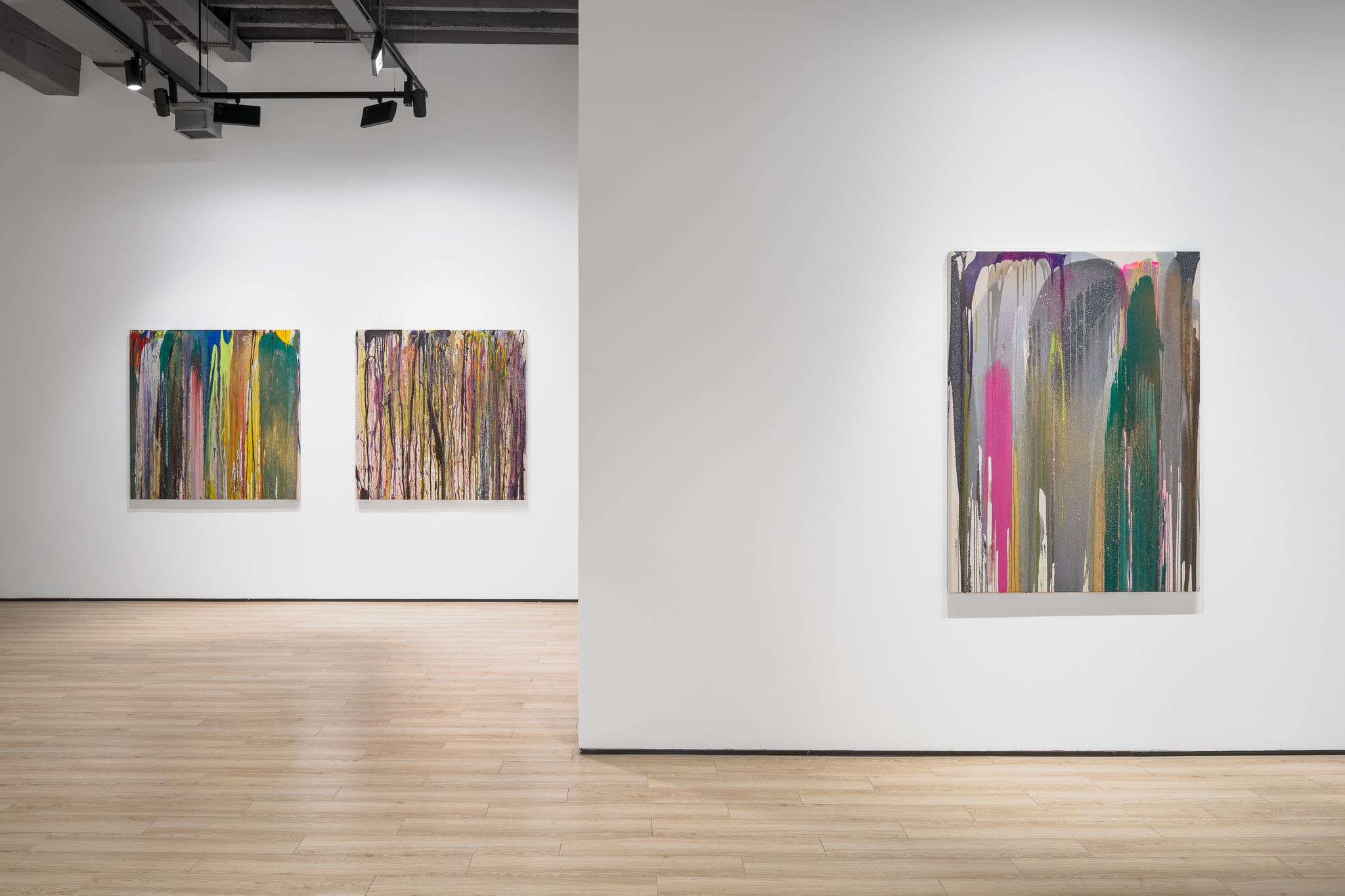 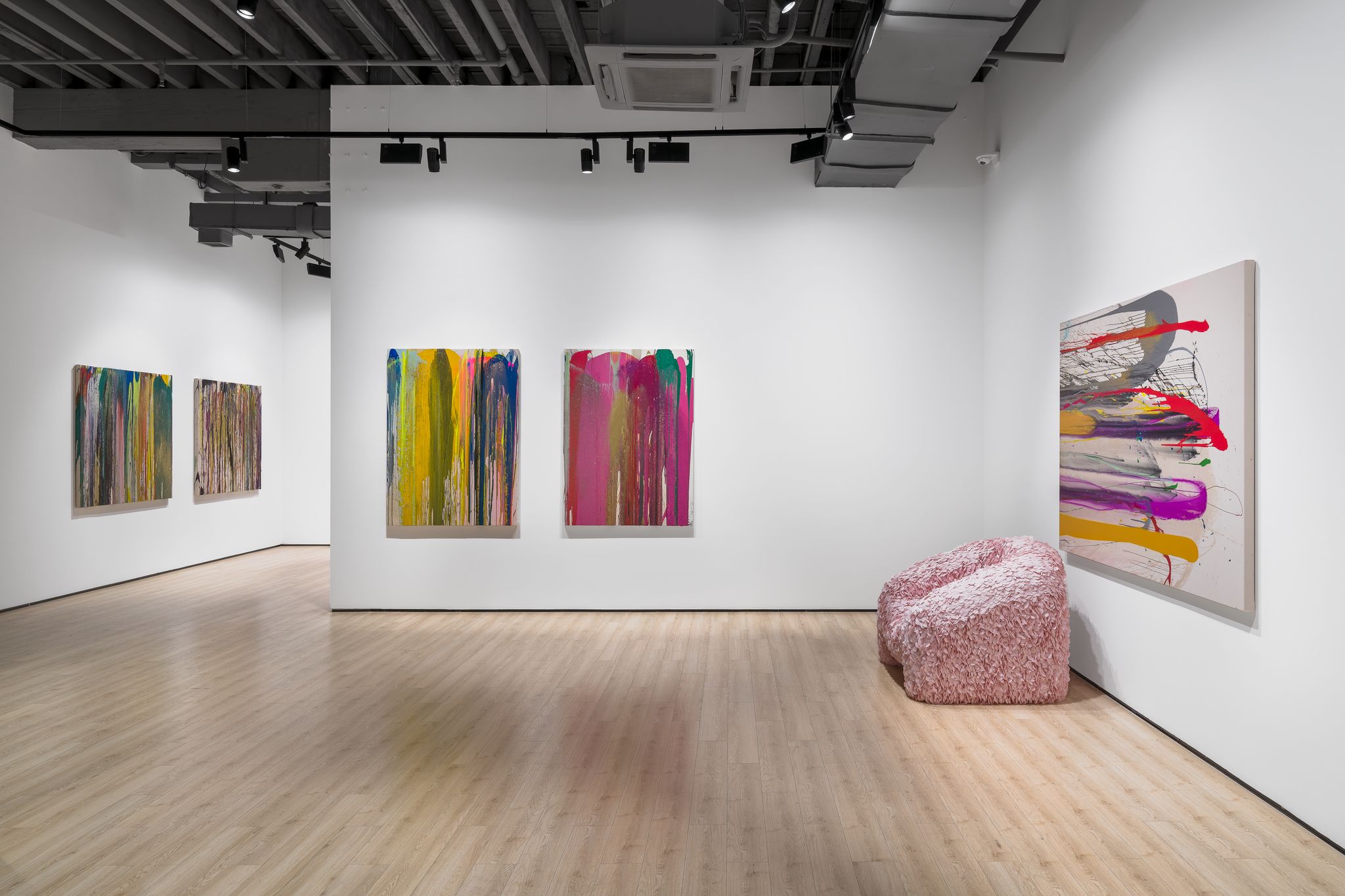 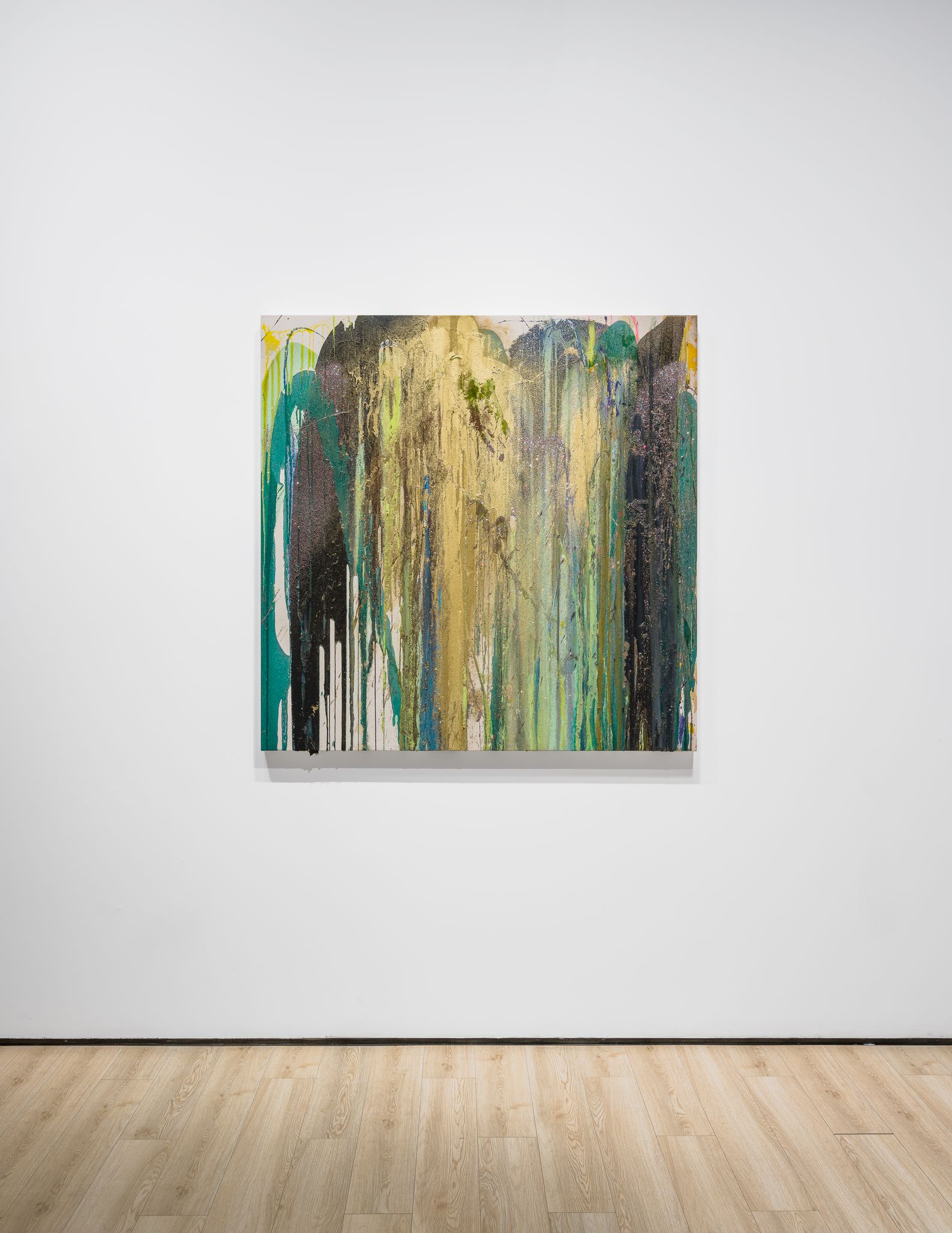 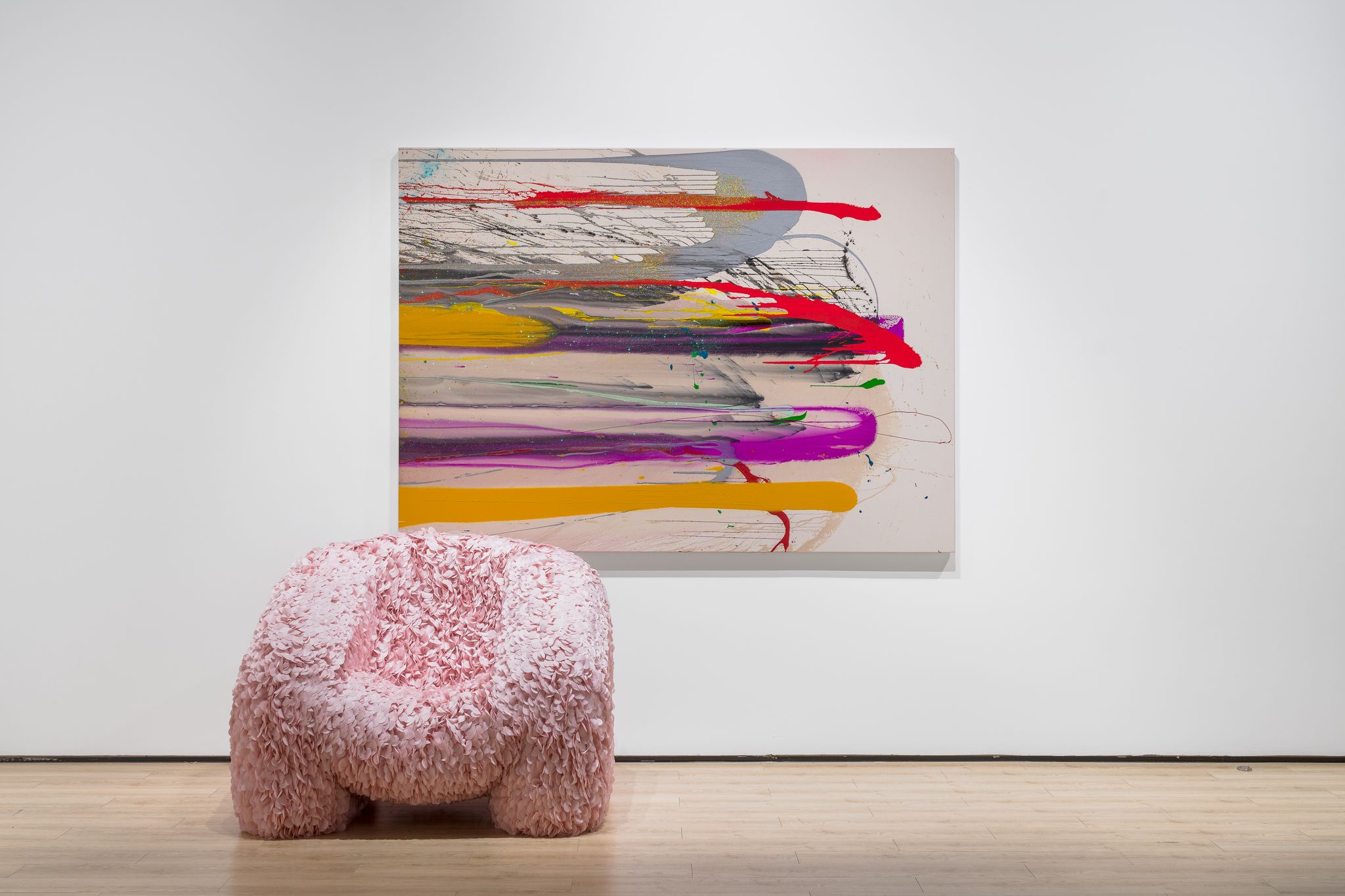 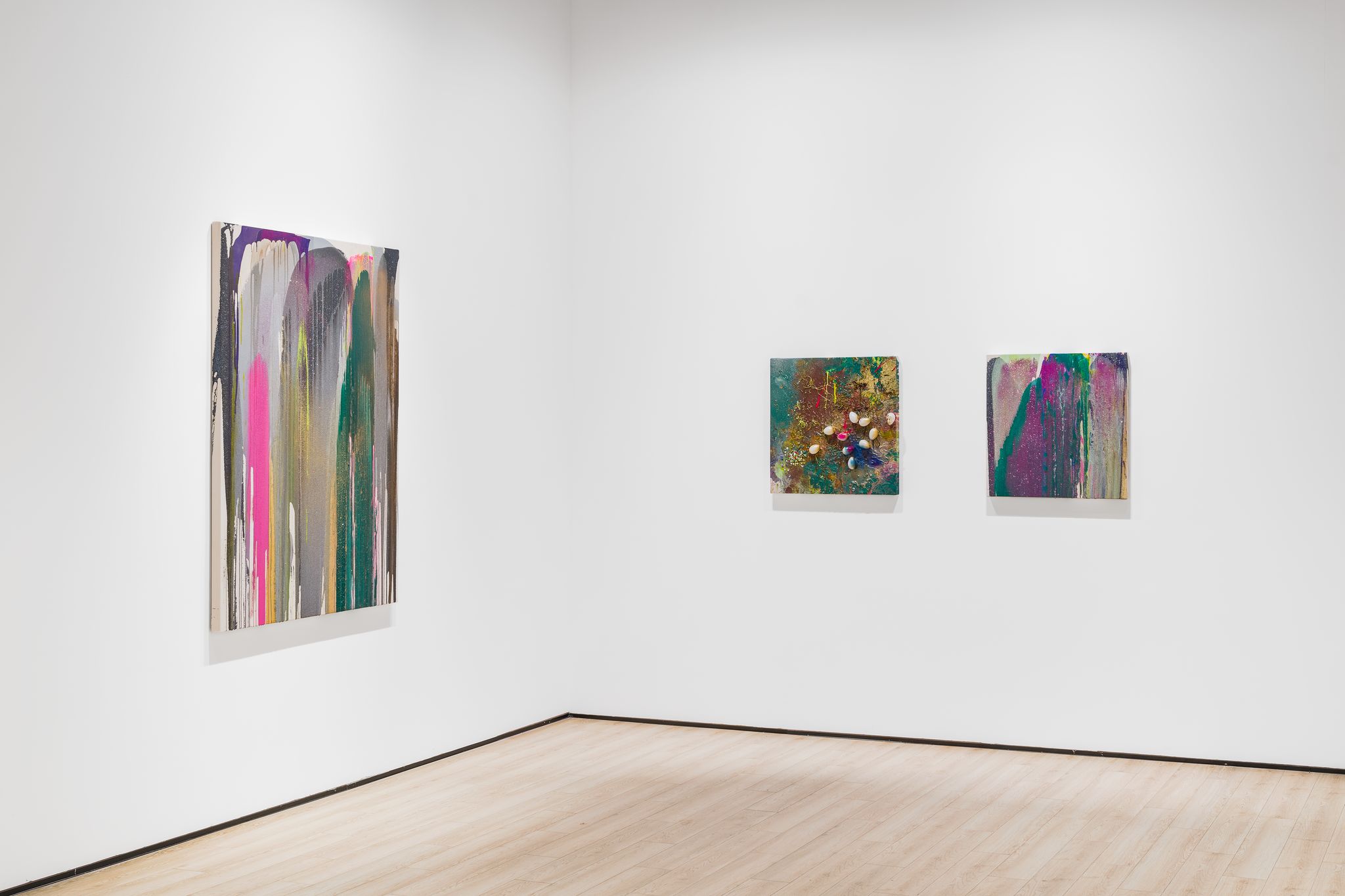 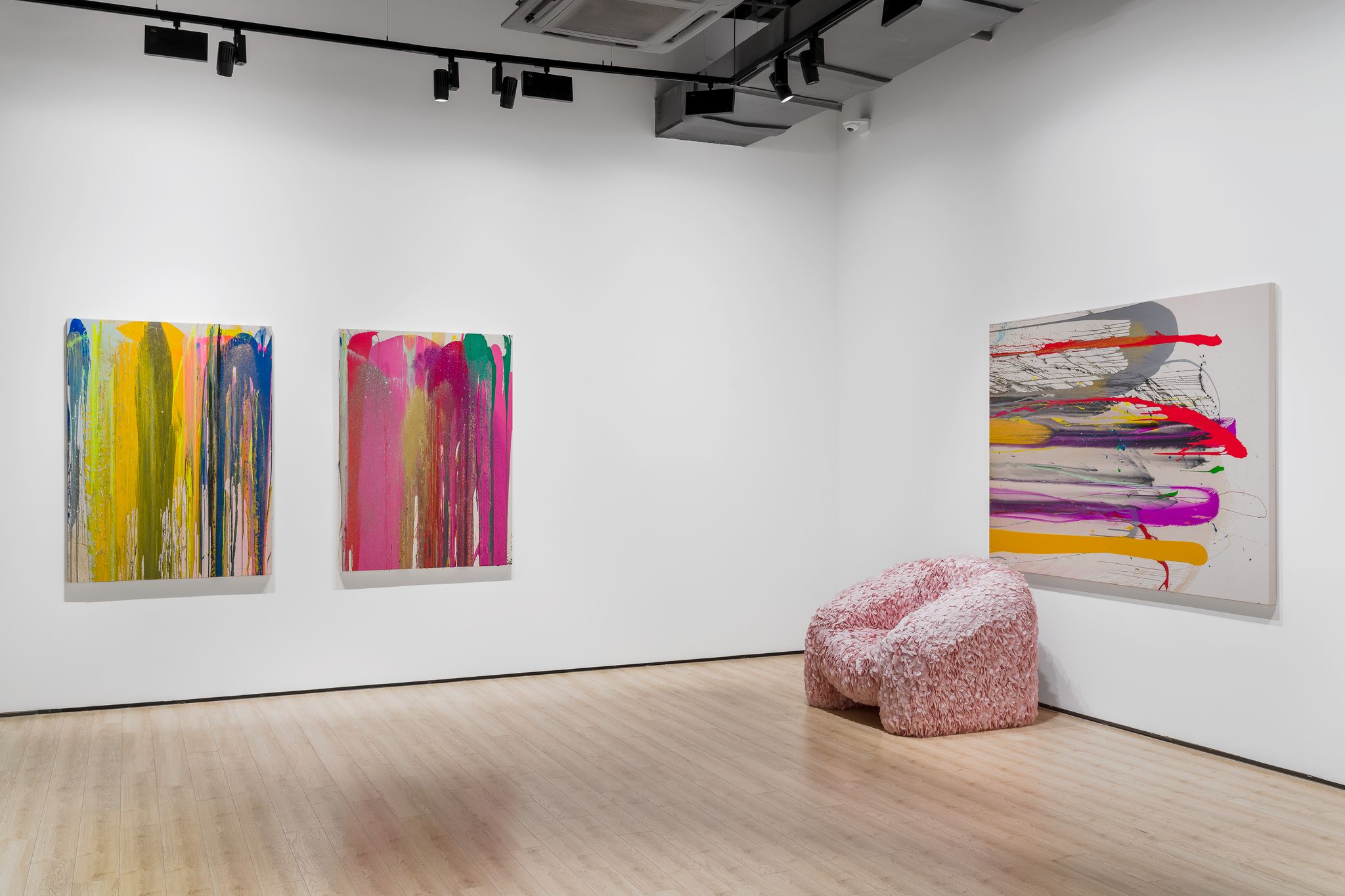