An intensive grappling with issues of pop culture and art history in the neo-expressive painting of Boban Andjelkovic is just as essential as his self-reflective, painterly experience.In his art, the artist raises basic questions concerning painting’s meaningfulness as a contemporary medium that, for him, functions as an antipode to the digital world. His painting, sometimes grotesque and unbridled, sometimes humorous and naïve-seeming, stands in the tradition of “BadPainting”. At the same time, new aesthetic connections are developed and combined with conceptual approaches.

For his solo exhibition “and this is only the beginning” at Galerie Rettberg, Boban Andjelkovic has achieved a painterly conception of the exhibition spaces. The individual positions go beyond the single panel painting, and begin to communicate with one another in terms of their composition and colors before going on to conquer the exhibition display. All of the works shown at Galerie Rettberg come from the series “I paint for Dora”, in which the artist formally and thematically approaches the painting “The Weeping Woman” (1937, 60 х 49 cm) by Pablo Picasso. This painting is considered to be a portrait of the surrealist photographer and painter Dora Maar, with whom Picasso had lived together for eight years until 1943. Althought he artists influenced each other mutually, Dora Maar never attained the institutional recognition she deserved during her lifetime. Even today, for many people, she is known merely as the “weeping” muse behind the great artist personality of Pablo Picasso. The fact that the significance of women artists is still in need of an institutional work-up in the art historical canon is something currently evidenced by numerous solo exhibitions such as that on Artemisia Gentileschi at the National Gallery in London (4 April to 26 July 2020) or group exhibitions such as, for example, “Fantastic Women” at the Schirn Kunsthalle in Frankfurt (13 February to 24 May 2020).

“I paint for Dora” constitutes the artist’s first series of related works. For quite some time already, Boban Andjelkovic has been intensively grappling with identity and the gender inequality between male and female artists. The series “I paint for Dora” stands as a personal attempt to create an antithesis to Pablo Picasso’s “weeping woman”. In terms of both composition and theme, Boban Andjelkovic approaches Pablo Picasso’s cubist portrait by taking up individual elements, such as the hand placed before the face, which is visible in nearly all works in the series. In a next step, the artist departs from this basic compositional framework by dissolving facial features into black, oval linear structures against the rough painting surfaces that are sometimes sprayed, other times painted manifestations on the canvas.Due to their wave-like movements, they remind us of paintings by the American artist Brice Marden. By repeatedly interrupting this network with organic forms, Boban Andjelkovic brings the composition back again to the genre portrait. This procedure makes us think of jazz improvisations where the theme is interrupted at the beginning, only returning to its basic form again at the end. Although the intensity of Boban Andjelkovic’s expressive painting makes us suspect an impulsive paint application, it is a reflective process and a deliberate placement of the brush he uses in building up the painting structure.

Whereas some works are distinguished by a highly contrasting, intense palette of colors, in other pieces, the artist uses a monochrome, all but grisaille sort of coloring, which he interrupts with magnificently colored details. By means of the dense, sometimes runny, paint application in several layers, the materiality of the painting is emphasized and we sense a reflection on painting as a medium.

Individual portraits have text fragments in German and English that accompany them, such as “Bye bye sweet Psycho”or “LOVE”, and in turn, these are taken up in the exhibition display. They are embedded in the abstraction or else clearly separated from it, with visual and compositional rules dominating the painting. By using the contemporary language of popular culture, the artist transfers the image subject into the present day, calling attention to its relevance. Whereas earlier works were determined by typographies, the medium of writing is relegated again to the background in works from the series “I paint for Dora”, where they become part of the exhibition concept instead.

Because of their glaring colors, the works initially seem to contradict any critically reflective engagement. Contrasting to the large-format portraits, we find works that show a bird-like creature with cowboy boots, sideburns and baseball cap. Anyone familiar with Boban Andjelkovic’s work in general will know that these are the artist’s typical painting subjects, hinting at self-portraits and betraying a certain measure of self-irony. In contrast to the large format portraits, these naïve-seeming figures may be regarded as a renunciation of the myth of the great, male painter genius. 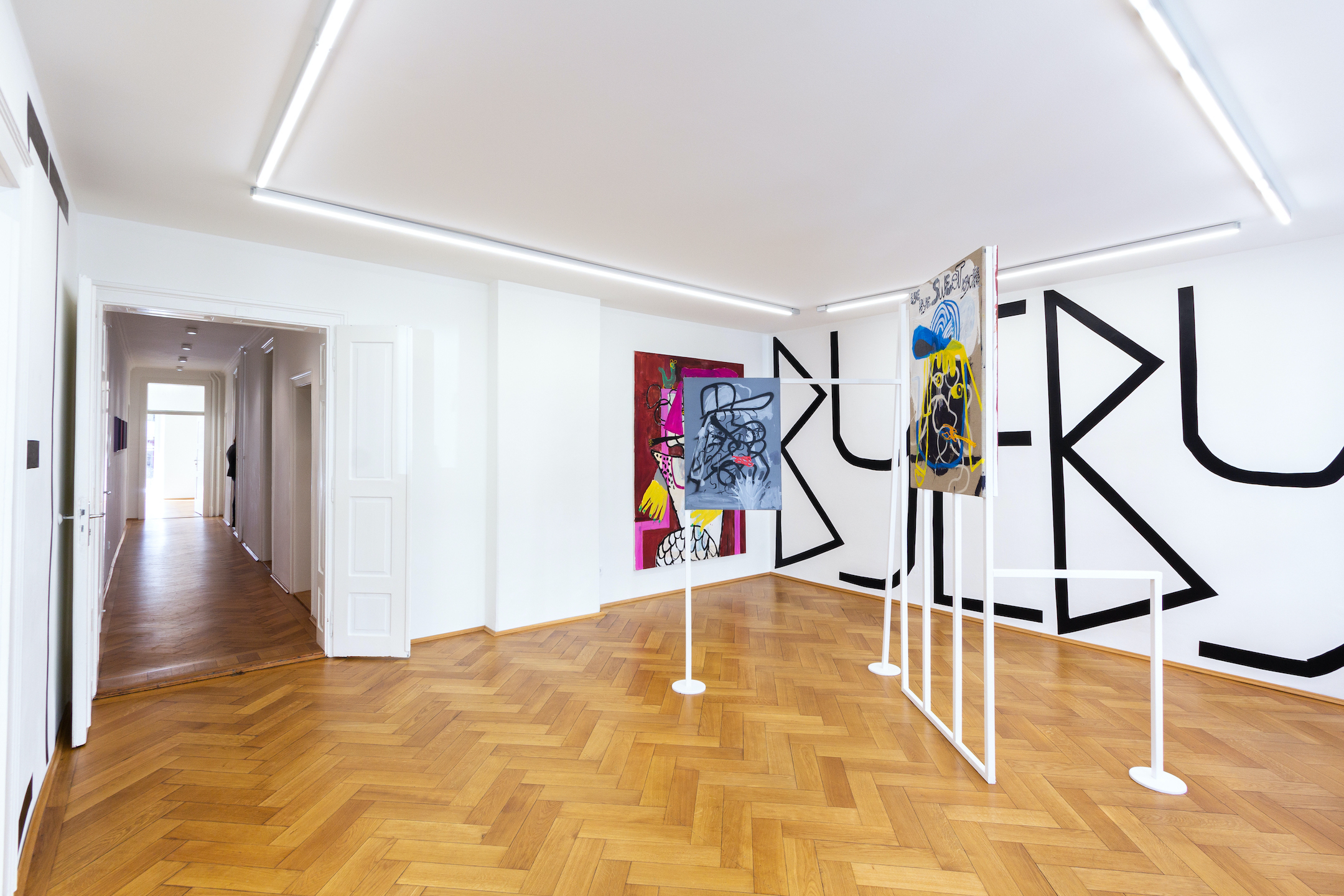 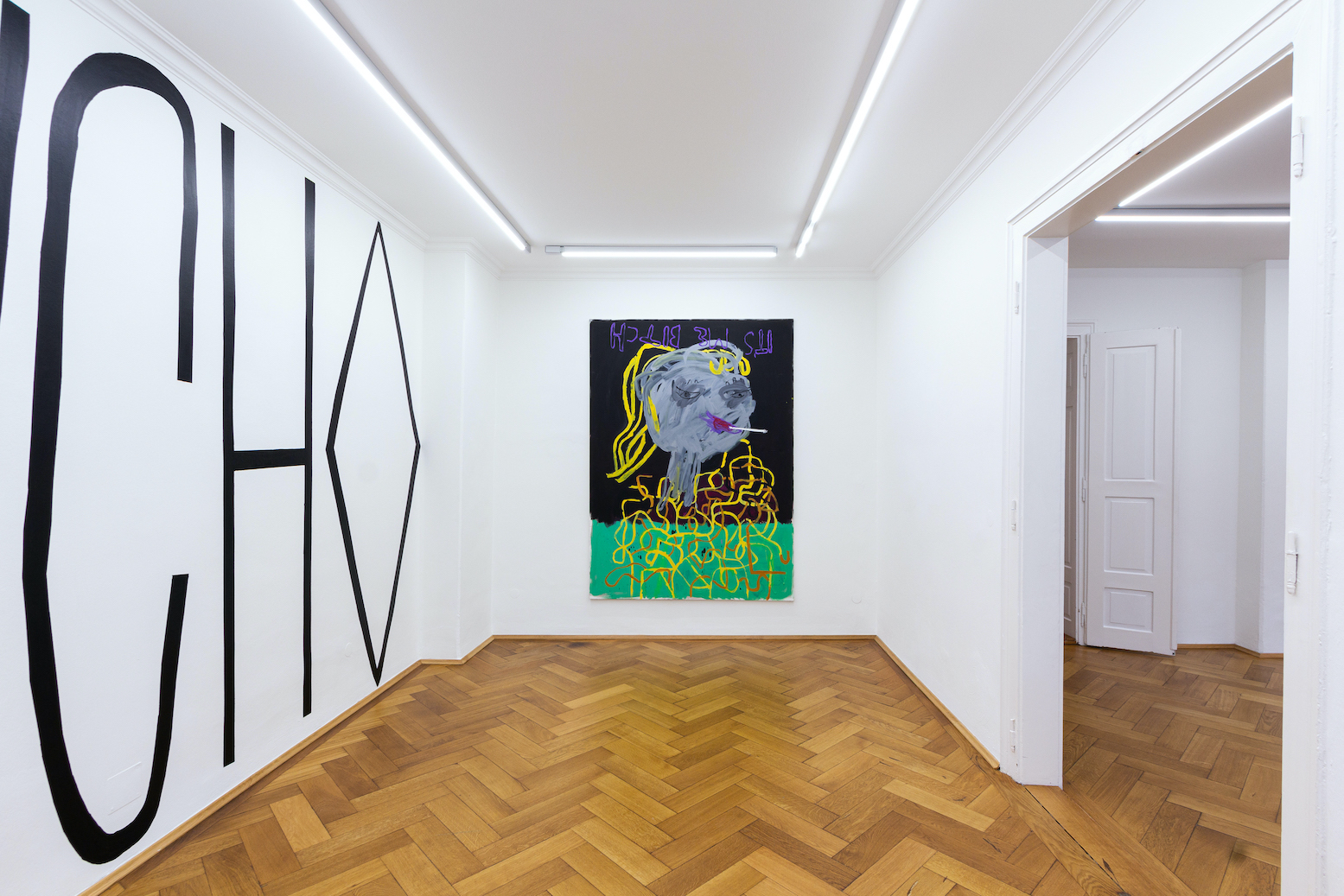 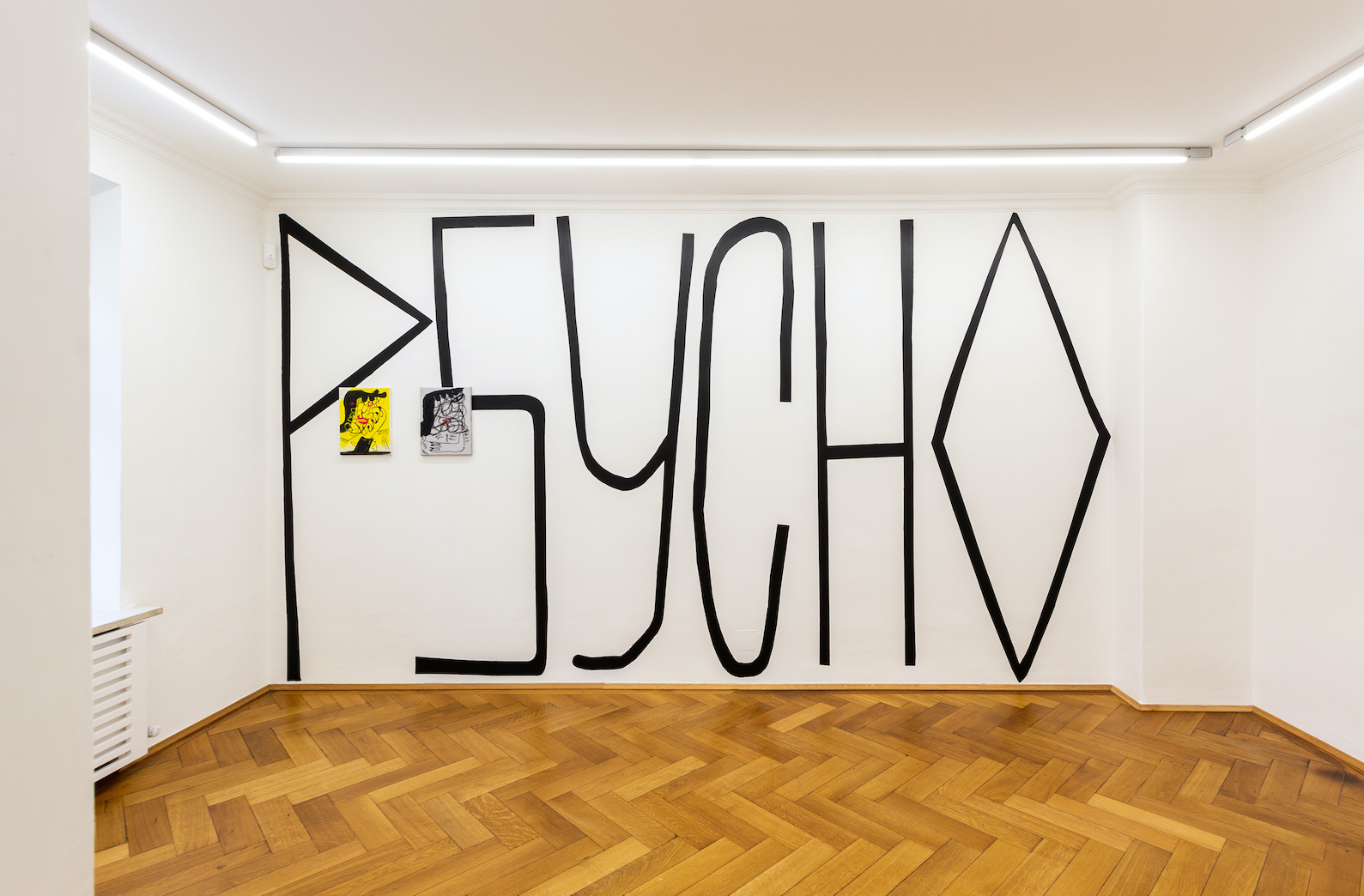 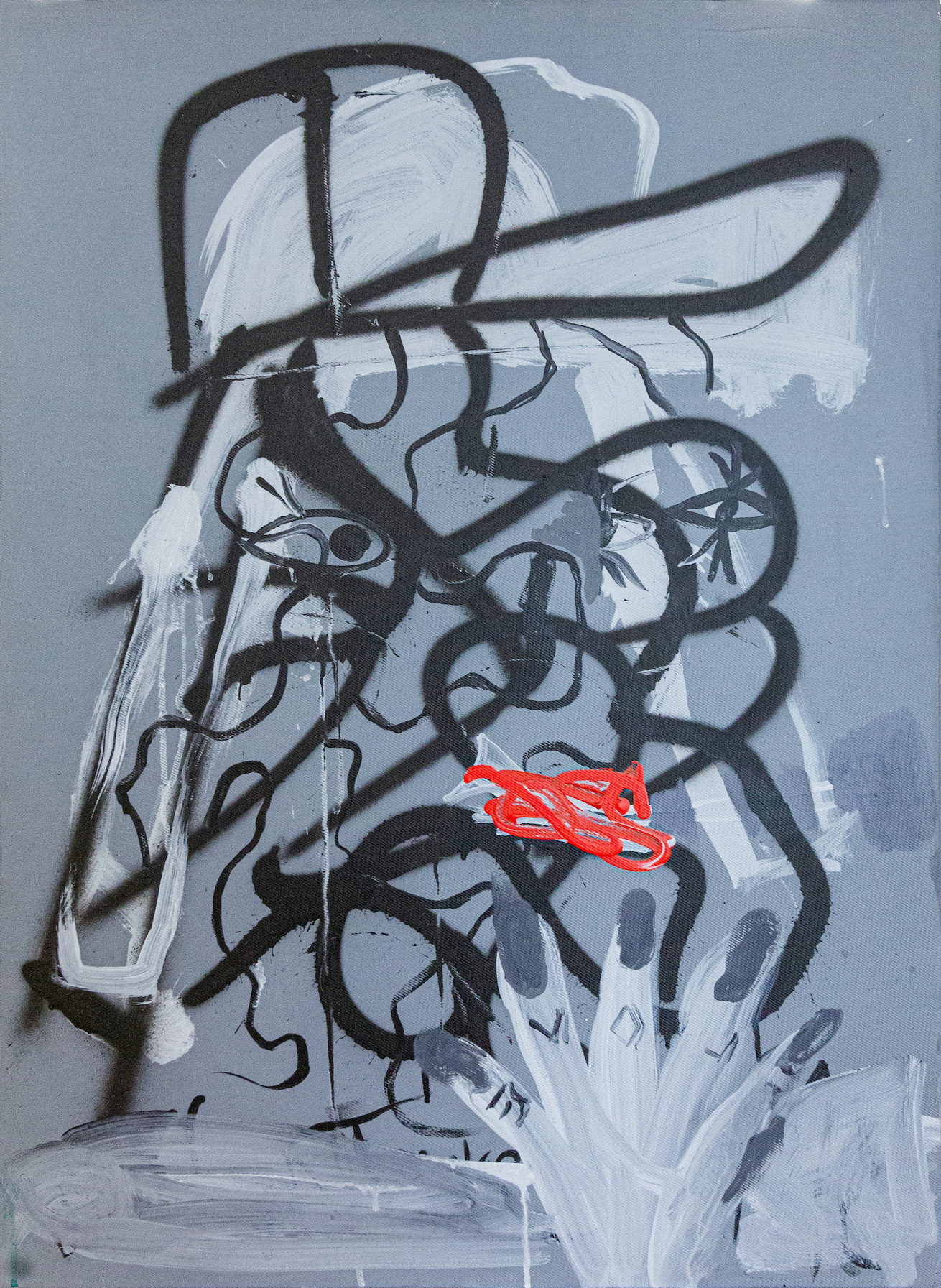 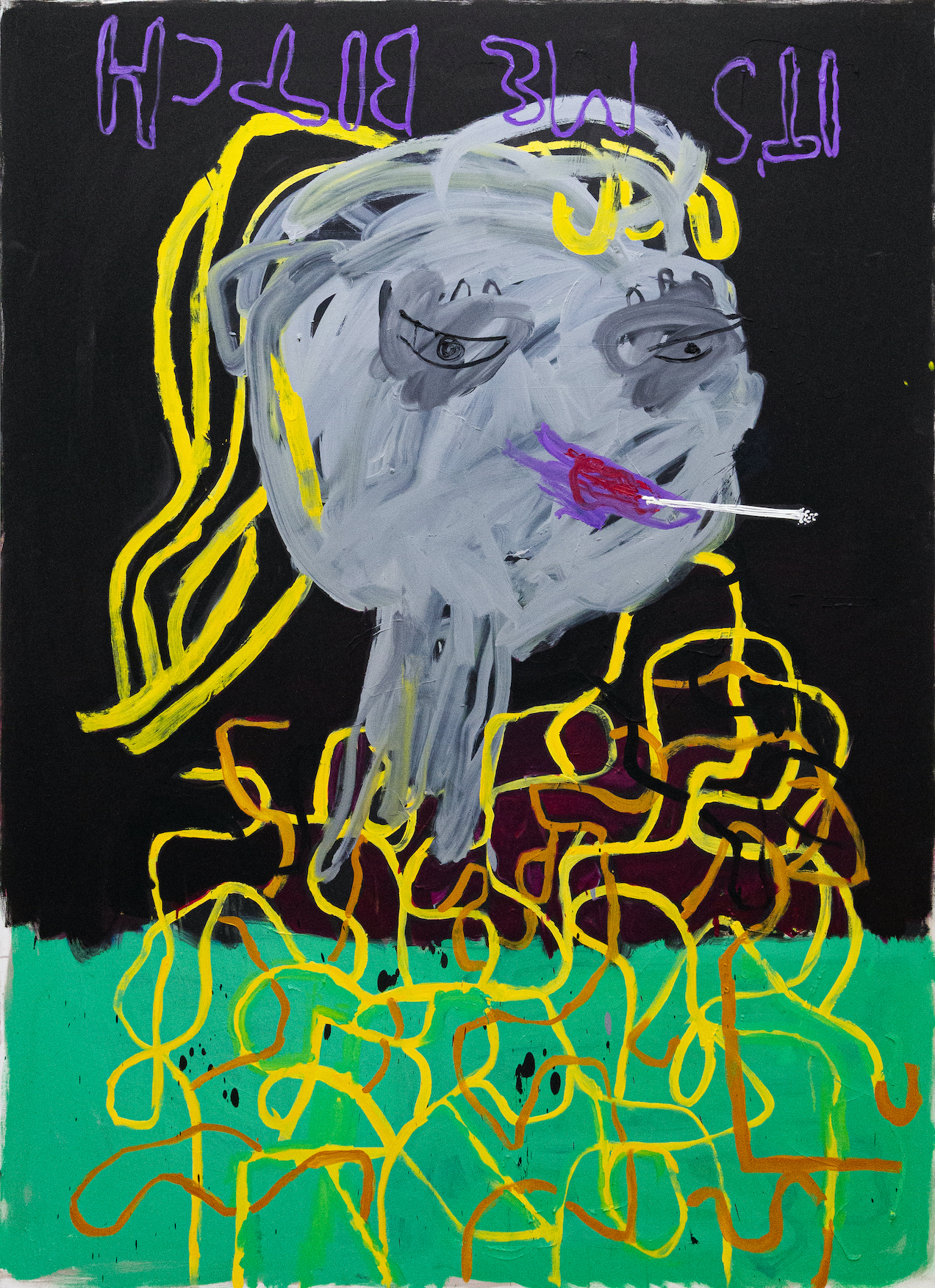 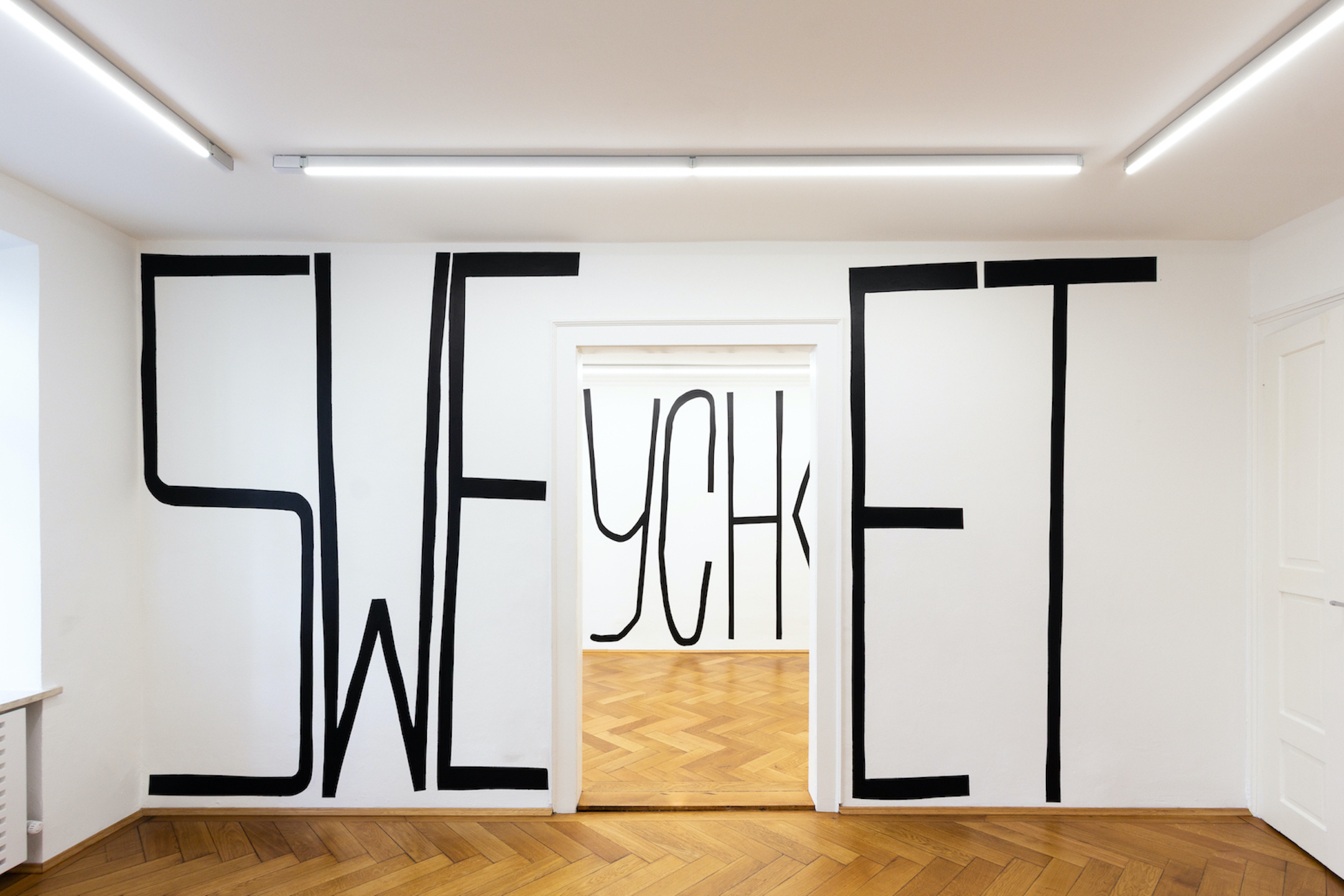 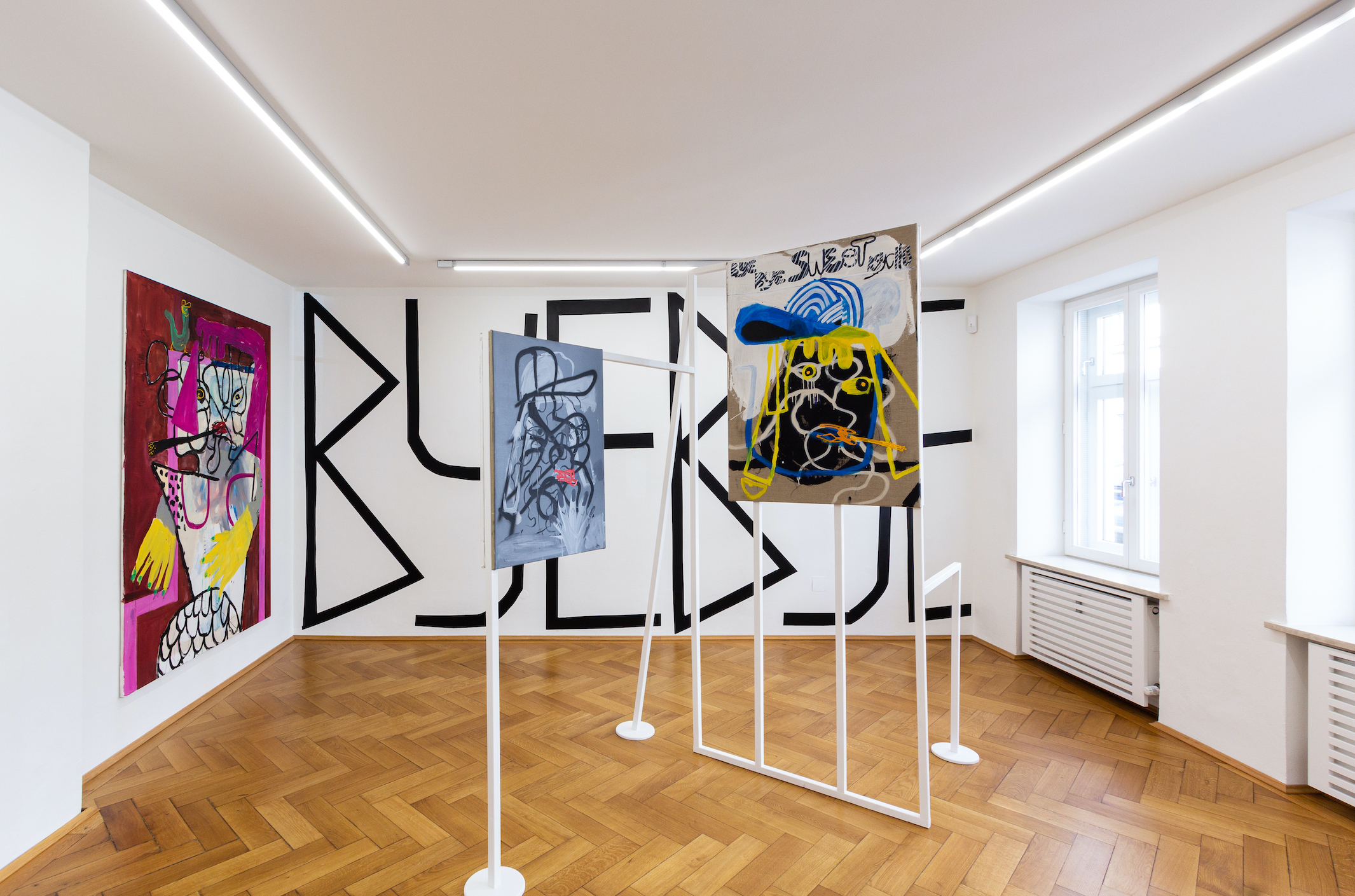 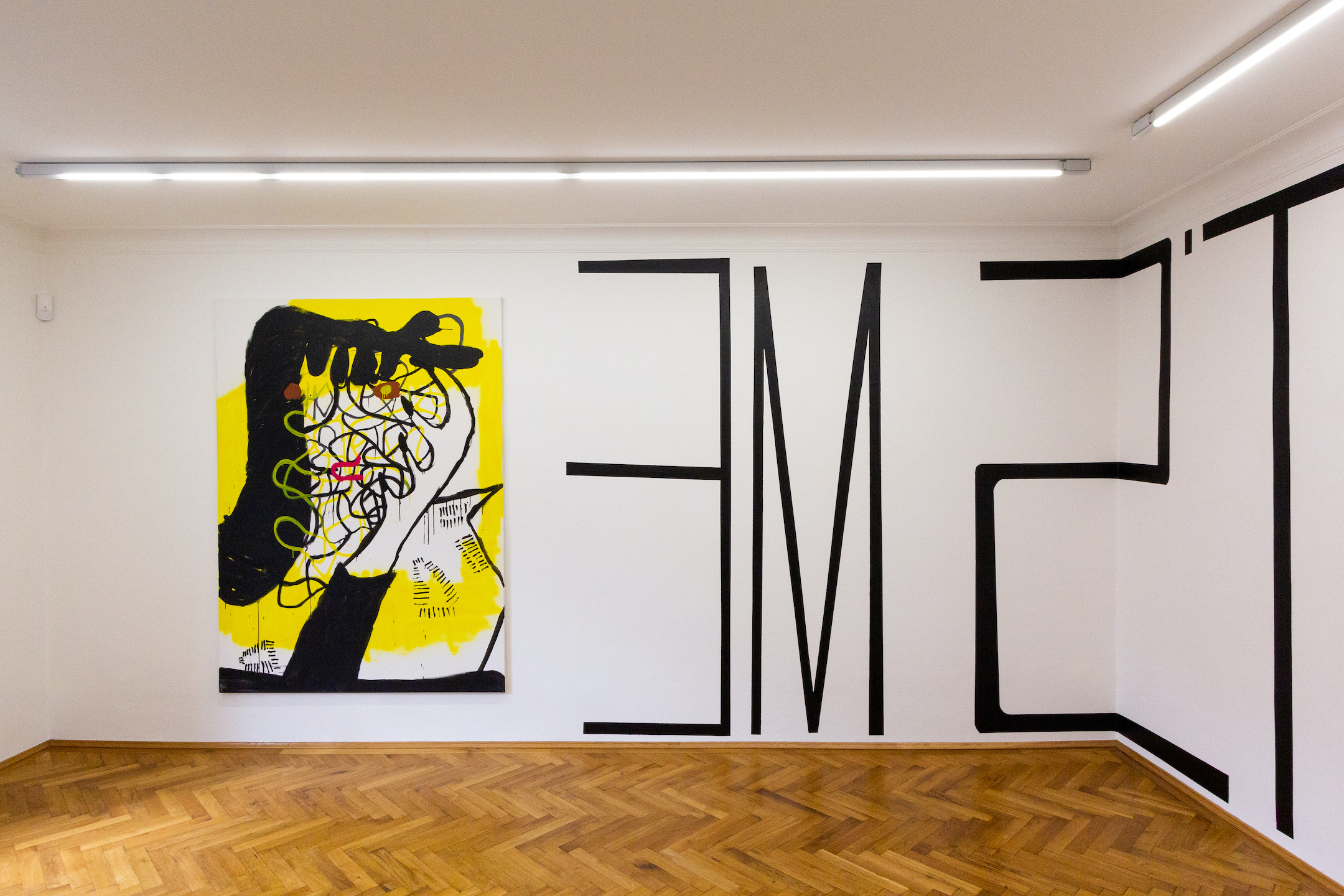 A Grain of Sand at The Sunday Painter