Meaning’s Loose Ends: Fern O’Carolan’s You’ll Never Get to Heaven at No Gallery
Words By:

Like Leeds-based interdisciplinary artist Fern O’Carolan, I grew up in Dublin. Like her, I also went to a single-sex Catholic school: the kind where children wear itchy-if-endearing acrylic sweaters, pose piously with their hands clasped for their first communion, and regularly attend school-mandated confession, during which the school’s priest affirms with ritualistic concision that children are all both damned sinners and God’s greatest achievement. In short, my classmates and I, at least in our younger years, were — to steal O’Carolan’s own term — the picture of innocence.

Growing up, however, was less than kind to several of us. As the more academically inclined left for specialized institutions to prepare for state exams, the rigid catechism of the Catholic Church provided little by way of expressive freedom to those who remained. Spurred on by a rejection of a system entirely incapable of dealing with their contemporary needs, some of the teenage boys turned to the usual outlets: destructive self-loathing and wild, uncontrollable anger. At fifteen , a friend killed himself. By eighteen, several of the now-young men had slid into cycles of domestic abuse (there was a musical written about it) and substance abuse, a spiraling doldrum that many still struggle with.

Yet, when we consider these two apparent opposites — the altar boy and the ne’er-do-well — what is their relationship? If you analyze them side by side, one could be forgiven for thinking of the two as ends of a spectrum: the purest of the pure, alongside he who will be defined by hurt, both to himself and others. But, intuitively, we should reject this kind of thinking out of hand. People are individuals, not film characters; complex experiences beget complex adults, not flat archetypes. We know that we are not all interminably suspended between “cute” and “convict”.

Enter Fern O’Carolan. While O’Carolan’s inaugural solo exhibition You’ll Never Get to Heaven at No Gallery in New York couches itself in the explicit terms of femininity’s impasse with Catholicism and its manifestation in Irish culture, it excels at an ambivalence that has much broader implications. At a moment when “yes/no”, “right/wrong”, and “guilty/innocent” binaries have come to dominate public discourse, O’Carolan’s refusal of dualisms altogether feels like an act of rebellion.

The Irish artist’s chain constellations (charm bracelets? mobiles?) of cut-out shapes and images “eschew [ ] cute and comforting imagery in favor of an aesthetic language seeking to challenge the value of innocence as much as it does the embracing of corruption,” as the exhibition text puts it. This, I would say, is accurate, albeit incomplete: O’Carolan’s imagery feels too inconclusive to be a challenge; too loose and off the cuff to constitute real articulation. Instead, it brings credence to the notion of a true visual language; each image contributes to a syntax, with meaning only achieved through interplay and combination.

Take the work Little Devil (2022): a small, cartoonish, cherubic boy in a devil costume sits at the top of O’Carolan’s image cosmos, while a heart-shaped picture of a woman’s feet, paradoxically clad in frilly socks, Mary Janes, and fishnets, sits underneath. Individually, these images mean very little; they instead function as totems that gesture to a whole set of presumptions, biases, and reactions that can be difficult to parse. Seen together, the effect is doubled: it’s at once funny and sinister and sexy and discomforting. Add to it a flower-shaped image of a person’s calf, a cheshire cat clock, a Buñuel-esque image of a woman’s eyes, and a black and white picture of cherries and the result is explosive. Loosely connected signifiers ask as many questions as they answer, and meaning-making becomes reminiscent of a “choose your own adventure” book — there are infinite modes of interpretation.

Little Devil is not alone in this regard; Motivation (2022), one of the show’s sparer works, operates in much the same way. While the piece only features three images — one of which is simply the word “motivation” with a small key clip art image — the aggregate of possible meanings isn’t lessened. The image on the right of the constellation, a heart-shaped picture that looks very similar to the “Goblin” emoji, itself a depiction of a tengu, suggests a devious lightheartedness, which becomes complicated by the image of a young woman holding a puppy below it. Perhaps it’s a nod to the irony of these types of images of women: the logic of “the girl next door” taken to its extreme, making madonnas out of those still in their teens. Or maybe it offers the opportunity for reclamation, signaling that which evades depiction, desire lingering just below the surface. The binding chains too do their part, hinting at charm bracelets, yes, but also (more directly) at BDSM and (less directly) at the intersection of industry and semiotics.

While those who enjoy being given just enough facile, digestible portions of art to look cultured on social media might be disappointed, O’Carolan’s open-endedness brings a refreshing flexibility to the show. We aren’t told what or how to think, because it’s not altogether clear that the artist herself knows exactly what she thinks: O’Carolan’s line of inquiry is contradictory and muddled by definition. Instead, we’re — for once — invited to have our own ideas; something that, these days, is not to be taken for granted. 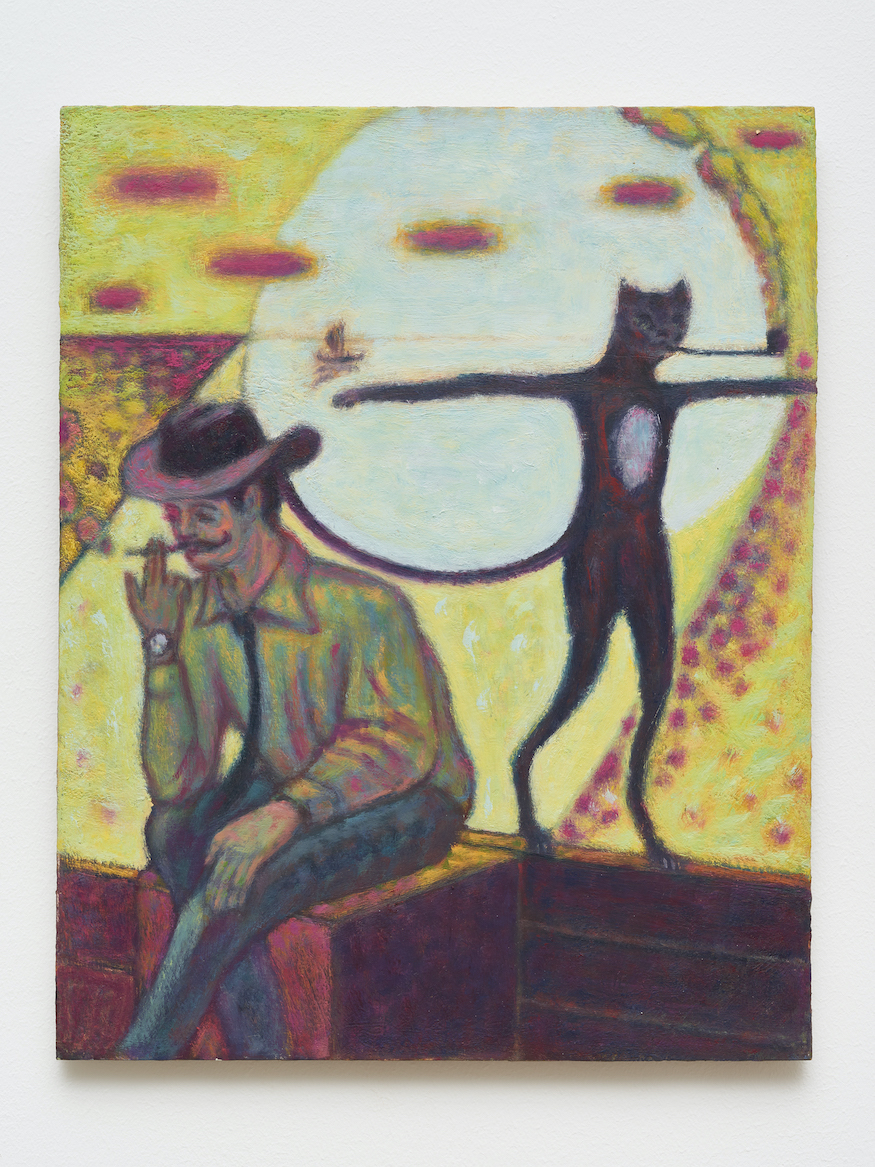 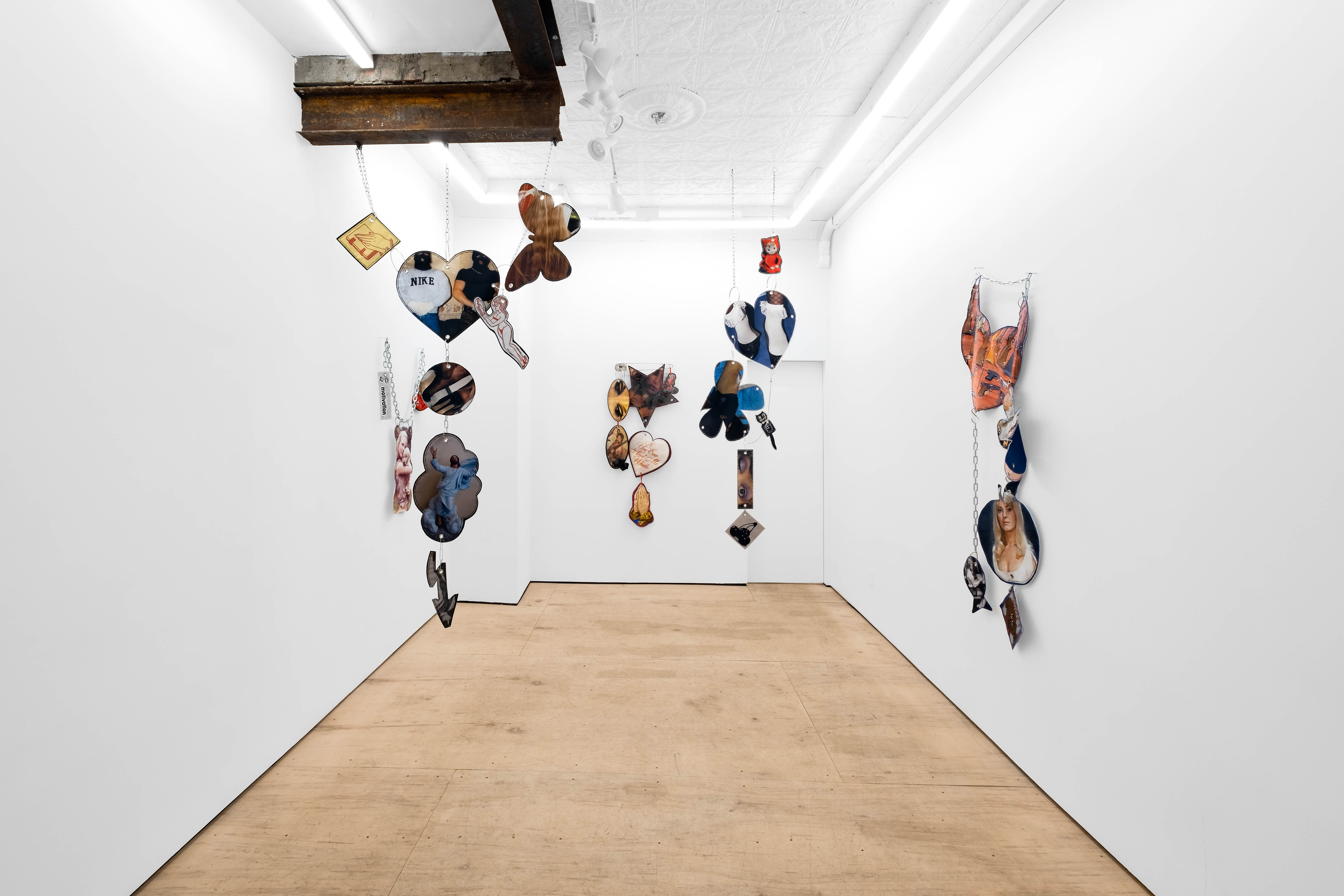 Meaning’s Loose Ends: Fern O’Carolan’s You’ll Never Get to Heaven at No Gallery